Tower defense with an action-oriented hook

I was sold on Taur, a tower defense game about a literal laser-firing tower, in a single screenshot.

It’s a weekend-eating strategy title about keeping hordes of robots, tanks, and bombers at bay, and while its minimalist aesthetic might seem low-key, its sense of scale and destruction are anything but.

Taur is the type of game you might see pop up on Steam and play on a whim. It’s an itch-scratcher. 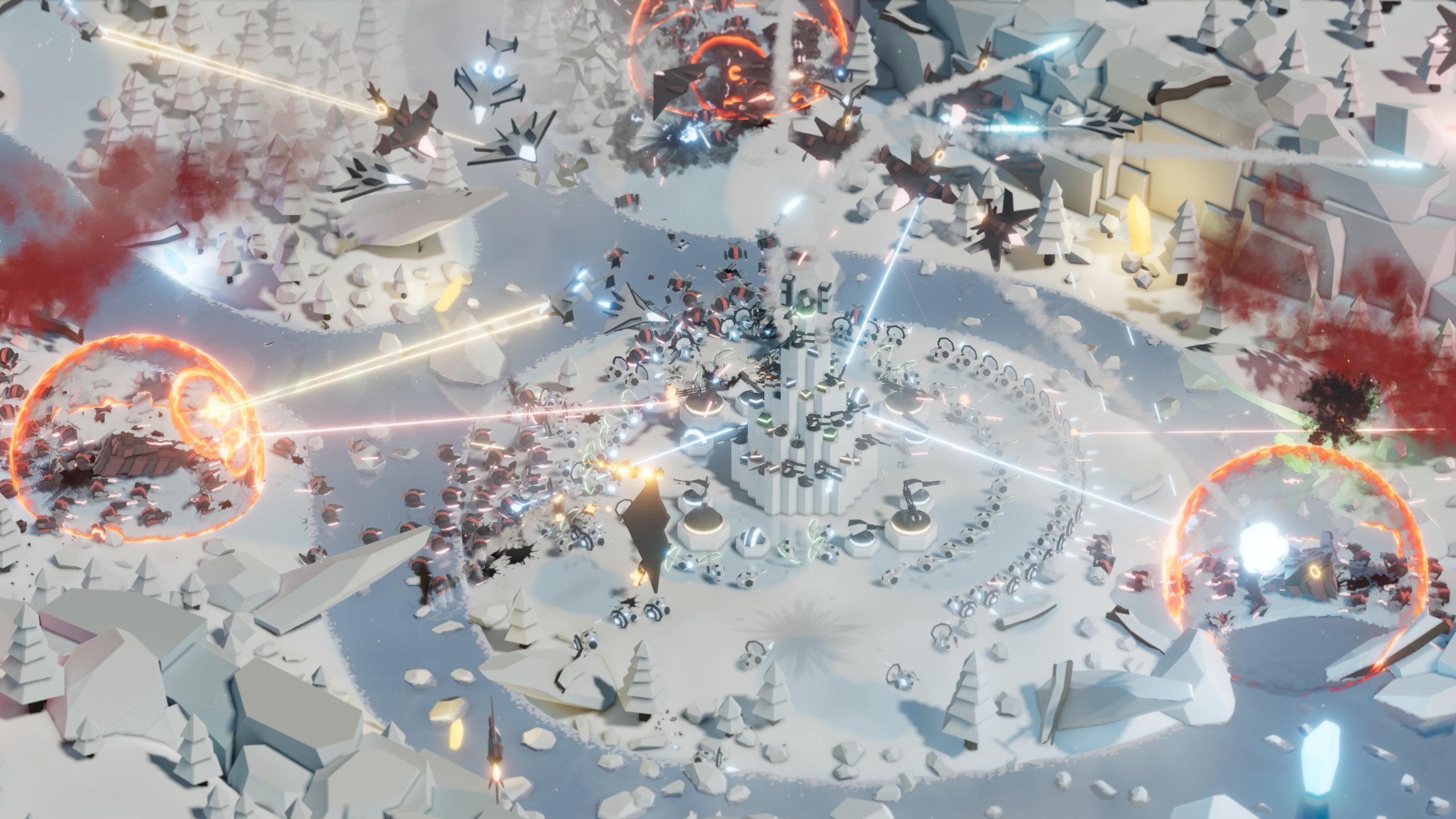 For better and for worse, what you see is (mostly) what you get with Taur.

As the commander of the “Prime Cannon,” you’ll have to fend off warmongering bots one day at a time. Each day, you’ll take on one of a few possible missions that feature different enemy types and tactics (some are wave-based; others are all-out offensives) as well as different rewards (used for upgrading your almighty tower and expanding it outward with auto-targeting sub-towers). The game is pretty good about letting you know what to expect before you commit, but you have to think long-term.

Depending on how a mission goes, you’ll gain or lose ground in a global conflict. If you lose repeatedly, your campaign may end prematurely, so the stakes can feel high after investing a few hours in Taur. On my first playthrough, I ended up backing myself into a corner with less-than-ideal stat upgrades, too many alternate weapons, and not enough regenerative health or shield capacity. Don’t be like me!

After a fresh start, I made better choices on the (surprisingly big) skill tree. In the beginning, when resources are scarce, your best line of defense is, well, you. You have 360-degree control over the Prime Cannon, which starts with a railgun and can eventually be decked out with a laser, surface-to-air missiles, limited slow-mo, healing drones, and other destructive playthings. It feels so good to use.

If there’s one thing Taur nails above all else, it’s the look, feel, and impact of shots. Things crumble. The more passive, traditional tower defense side of the game is fine, but everything to do with your direct control over the cannon is brilliant. I never got tired of it, even after passing the hundred-mission mark.

Further into the game, once you’ve stockpiled resources, you’ll be able to afford mini-towers on a regular basis. This is where things start to get hit-or-miss for Taur. I love the idea of surrounding your central tower with other, smaller structures – you can have around 70 in total, and the battlefield becomes a chaotic sight to behold – but the balance doesn’t always feel right (or interesting enough).

There were times where I’d burn through multiple missions in a row without getting That One Crucial Resource needed to buy new towers; other times, I’d be flush with the stuff. If a tower gets destroyed, you’ll be refunded, but the same can’t be said of skill-tree unlocks – they’re permanently locked in.

That format isn’t as conducive to experimentation as it could be. There’s also a feeling of diminishing returns. After a couple of hours with Taur, you’ll recognize the ebb and flow of most levels, and they’ll begin to mindlessly blur together as the same tactics work against the same semi-randomized formations time and time again. You can get far with only a few big ideas in your playbook.

The game kind of just keeps going forever until you can take down the Imperion Overlord, a battle-cruiser capable of spawning endless (?) hordes. I couldn’t beat it on level 50. Using an almost maxed-out Prime Cannon on level 100, I came so close, but still couldn’t bring it down. Its health bar is obscene. 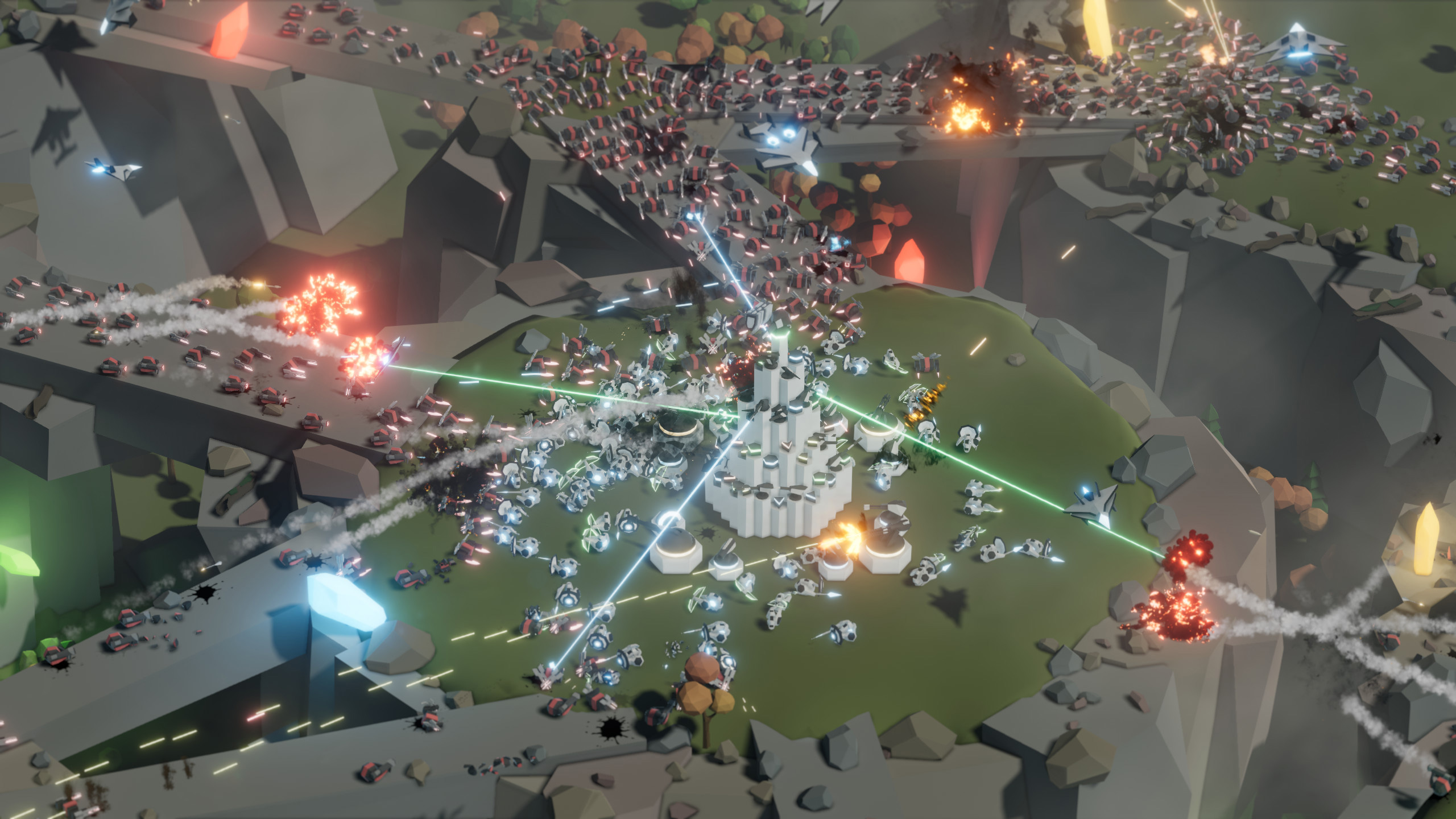 I’m not sure I’ll try again – it can be a while before the Overlord resurfaces – but I still enjoyed my time with Taur. The game is almost there. With balance tweaks and more mission variety, it could be great.

As is, Taur has a wonderful central idea – it lets you tear up the place with a ridiculously powerful sci-fi cannon that’s a joy to control – but the elements surrounding that core concept aren’t as fleshed-out, refined, or engaging. It’s the kind of game that leaves you wanting a sequel that can fire on all cylinders.