When I first saw the trailer for Tales of Elastic Boy, my mind jumped to LocoRoco. With his rounded body and rabbit-ear antennae, the main character was a dead ringer for a bubbly, bouncy LocoRoco. With a fascination for one of the PSP’s sparkling gems guiding my purchase intent, I figured I’d give my review of this recent WiiWare release the same Off-Brand treatment I gave my Soul of Darkness review.

You can hit the jump for more detailed impressions, but I think my time with the game can best be summarized by the following chant:

MY WRIST! MY WRIST!
MY F*CKING WRIST!
WHAT WERE THEY THINKING!?
SON OF A B*TCH, IT HURTS!

I’ve long wondered what people’s beef with motion controls was. “Can’t handle it, huh? Too much effort, huh? Go cry me a river.” Now, I come to you as an enlightened man, as one who has seen the error of his judgments and wishes to sympathize with you.

Tales of Elastic Boy has one of the most uncomfortable control schemes I’ve ever suffered, if not the most.

As in LocoRoco, you must roll your colorful avatar across the landscape while collecting trinkets. Instead of tilting the whole planet to guide the hero Mooky, you have direct control over him. I figured you’d hold the Wii Remote sideways and tilt left or right for movement. In actuality, you hold it in the standard position and rotate clockwise or counterclockwise.

If you’ve ever played a game that required this specific motion, like Zack & Wiki or Metroid Prime 3, you’ve probably discovered that it’s more difficult to twist your wrist in one direction than in the other — there’s more resistance turning outward than inward. The makers of those games understood the limits of the human body and made infrequent use of such motions. Lexis Numérique does not. 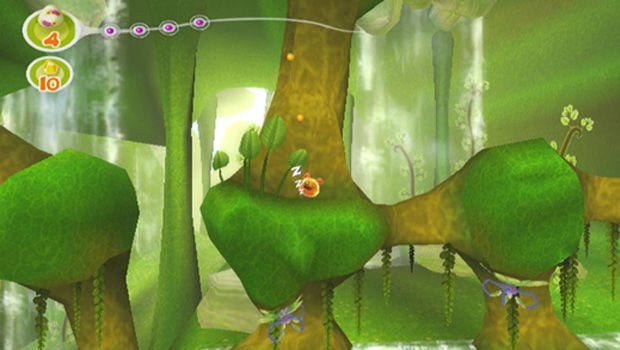 Rolling requires you to hold the B trigger in addition to twisting the remote. Is jumping mapped to A? Nope! Hold B and flick the remote! How far you jump is determined by how fast you are rolling, so you have to flick your wrist while twisting. If you want to attack an enemy, you have to flick the remote while airborne and holding both the B trigger and the A button. Should you miss your target — and you will — you must repeat the routine from square one.

Taking a page from World of Goo, you can travel through the air by latching onto anchor points. You pull yourself onto an anchor by pointing at it and pressing A, then you hold A and drag yourself across the other anchors in a sequence. However, if you are free falling and wish to grab an anchor, you must flick the remote without pressing a button. And not limpy-wimpy flicks, mind! This game requires some strong snapping if you have any hope of registering an action. There could have been an optional Nunchuk control scheme to address these concerns, but noooooooo!

The controls are so fidgety that the majority of game time is spent repeating botched maneuvers over and over again. I wondered if this was just me, so I observed my five-year-old cousin during play to see if he had better luck. I saw his adorable face pursed in frustration as he twisted the remote every which way, trying to will that little orange blob over a friggin’ two-centimeter wide gap. Even he complained about discomfort, and he’s young and wiry! 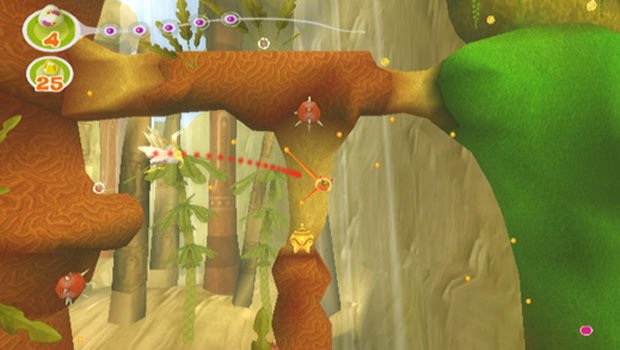 The controls are such a mind-blowing hurdle that the rest of the game compensates by eliminating any degree of challenge. There are three difficulty levels that make slight alterations to item and enemy placement but don’t actually increase or decrease overall difficulty. If an enemy grabs hold of you, you have a five-second window to shake the remote furiously and escape unscathed. Even if you do take damage, there are plenty of restorative items about, and collecting 25 nuggets will refill your entire health bar anyway. I’ve tried intentionally killing myself, but always give up before half my health bar is depleted!

The nuggets you collect are used to unlock extra characters and maps for the multiplayer mode, but I can’t imagine playing with a second victim is any more fun or rewarding than the main game. It’s padding on a game that already feels like one giant tutorial — it ends after a piddling six stages plus a snore-inducing boss battle.

Oddly enough, Tales of Elastic Boy is a sequel to a 2008 DS game called Mister Slime. I’ve heard that the touch controls in that game and even more unbearable than the motion controls here. If that’s true, I know a game I’m never approaching within a ten-mile radius. And if that “Mission 1” subtitle denotes the start of an episodic series, I know that there will not be a “Mission 2” in my future.

After initially comparing Tales of Elastic Boy to LocoRoco, I had to chastise myself for such a grave insult. Instead of flat, vibrant pastels, we got blocky polygons with bland textures. Also, everything looks really stretchy because the game was not optimized for widescreen TVs. I’m dumbfounded that there is still a company that would make such an oversight. Seems deliberate.

The “Content Creators Have Phoned It In” Scale of Evil Twins:

Tales of Elastic Boy – Mission 1 requires that you contort your wrist in ways it wasn’t meant to bend. Maybe the blistering tendinosis you’d likely develop is a sign that this game isn’t meant to be played, either.