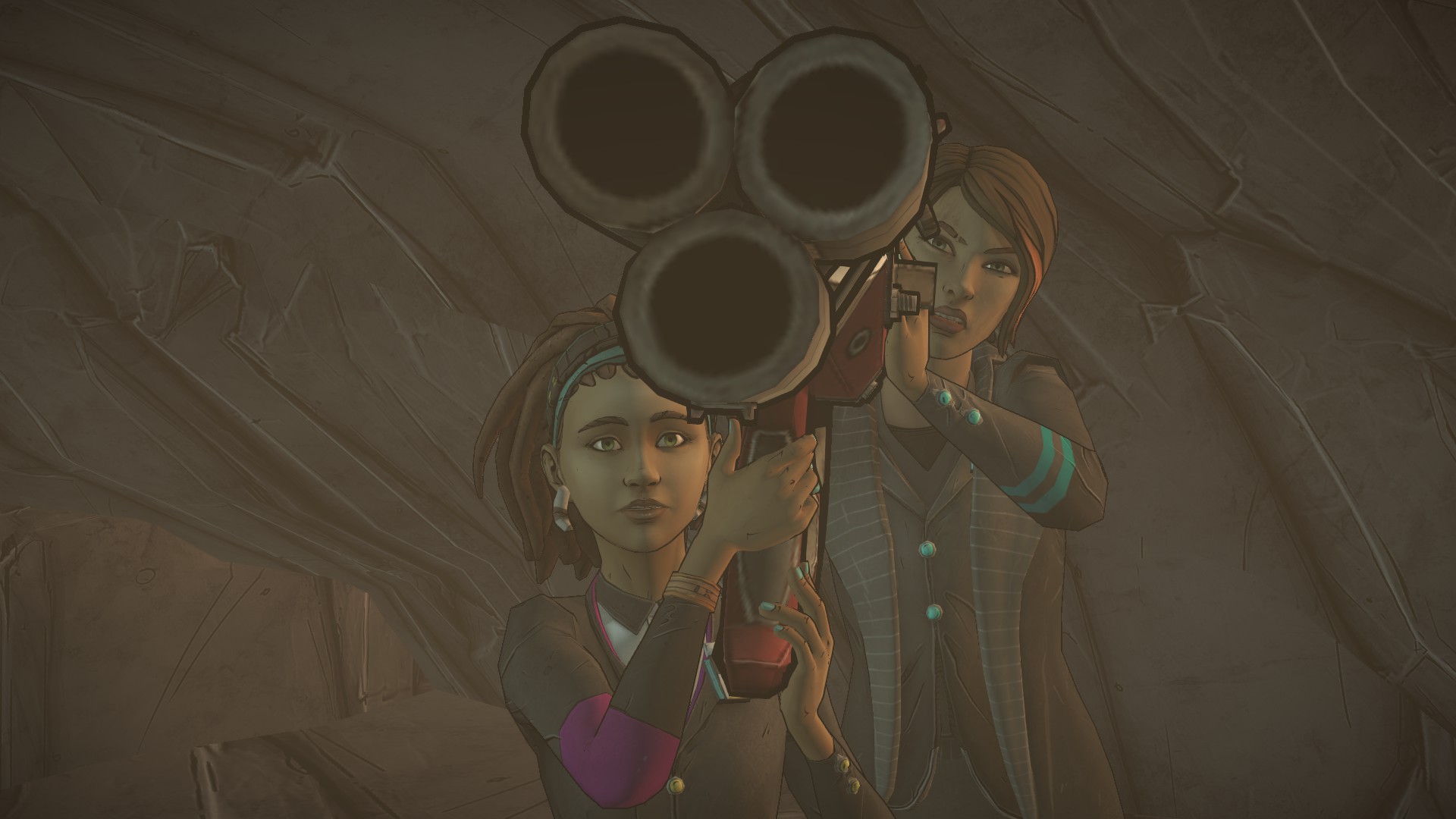 What a ride. When the first episode released late last year, I wrote in the review “If the rest of the season maintains this level of quality, Tales from the Borderlands will be up there in history with the other great recent Telltale adventures.”

It is finished now and I am pleased to report that it kept up the brisk pacing, sharp writing, and truly heartfelt moments throughout the five episodes. There’s no doubt this will be held in high esteem among adventure games. Tales from the Borderlands is the best series Telltale has ever produced. Period.

At the end of the previous episode, so many questions were left unresolved. What happened to Felix? Where is Vaughn? How is Rhys going to deal with Handsome Jack? Who is the Stranger who kidnapped Fiona and Rhys to get the whole thing started?

All of those questions get answered. The story of the Stranger is particularly well done. Over the course of the series it has become clear he was a known character. I had a couple of guesses, some of which were shot down along the way as people died. When it was finally revealed, it caught me by surprise, but doesn’t feel like a cheap copout twist. Some hints were there on the way.

The other big question looming over the series over its duration centers on Gortys. Most of the story takes place via flashback narration in which the perky robot is happy and healthy, but the present-day bits have had Rhys, Fiona, and the Stranger collecting her pieces all over again. What happened to her?

It’s a question I personally fretted over because Gortys has become my favorite character in the entire Borderlands universe. Her unrelenting optimism and childlike demeanor are so refreshing on the cutthroat planet of Pandora, giving her best lines that much more comedic weight. Gortys delivers several laugh-out-loud funny lines this time around, but a sad effect of Telltale design is that some players might never even hear them. My favorite came as a response to one of the dialogue choices. It almost makes me want to play through again just to see if there were any great lines I missed out on.

This episode gives another substantial reason to warrant a second play through. Getting ready for the final confrontation, the usual gang of suspects has to put together a team, pulling from the supporting cast reaching back as far as episode one. In a move Telltale ought to adopt for all its series, it spells out exactly who is available and why or why not based on past choices. I covered for Athena when Janey was suspicious after the chase in Hollow Point, so she would be willing to fight with me again. I was hesitant to call myself a Vault Hunter, so Zer0 never took much notice and was unavailable.

Not only would I have to replay this last episode if I wanted to see Zer0 in action again, I’d have to basically start from the beginning. Given how good this series is, I’m not upset about that.

I doubt the final outcome of the fight with the Traveler is any different depending on which characters join in, but the battle itself is customized depending on who is there. It’s intrinsically cool to see each character in action given the circumstances of the encounter, but I am reluctant to spoil the specifics.

One of the aspects of this series that amazes me is just how impactful it can be on the Borderlands universe. What started out as a story about a middle manager and a lowly grifter has irrevocably altered Pandora as a whole. While The Pre-Sequel worked within the confines of the existing lore, providing back story for Hyperion and Handsome Jack, Tales builds new stuff on top, setting up for the inevitable Borderlands 3.

Thinking of the future, there are a few open-ended plot points in this last episode. Though a lot of past choices were highlighted and their effects were explicitly shown, the choice that puzzled me the most is given to Rhys as he is describing his struggle with Handsome Jack. As far as I could tell, nothing in this series was affected by it despite its potentially huge consequences.

Additionally, there’s the very end. After the climactic battle with the Traveler, as the group is celebrating and grabbing loot, there’s one final scene that might be setting up for a whole new adventure starring Rhys and/or Fiona. Whether that becomes Tales from the Borderlands Season Two or part of the mainline series, I don’t know. But it will definitely get Borderlands nerds excited considering the possibilities.

I cannot recommend Tales enough. Borderlands fans will love the fresh take on the dark comedy universe. Telltale fans will love the smart writing and callbacks to choices made throughout. People who don’t fall into those categories might still love it because it is just that great.

This last episode maintains the action, drama, and comedy present throughout the series. It ties up all the major loose ends while leaving just a hint of room for more to come. Most of all, it solidifies Tales from the Borderlands as Telltale’s best series to date, a pinnacle of modern adventure gaming.