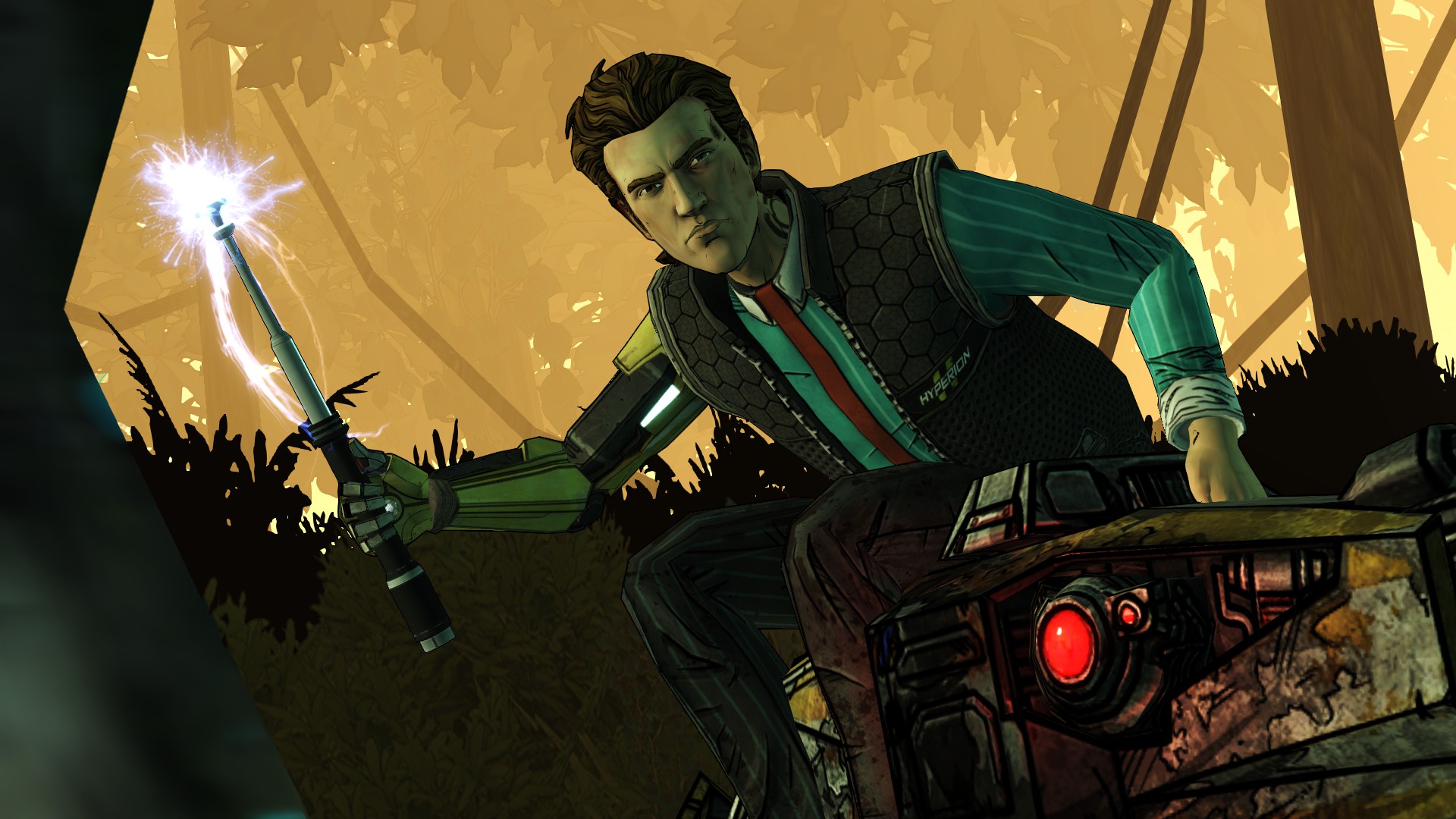 Ever since last year’s debut of Tales from the Borderlands, I have had high hopes and expectations for the series. The wait for Episode Two: Atlas Mugged was painfully long, but it was worth it. The third episode releases today and it maintains the quality of the first two.

If it can keep this quality and this pace up, Tales from the Borderlands could be a serious game of the year contender come December. But that’s me getting a little ahead of myself; for now, I just know it will be hard having to wait for Episode Four: Escape Plan Bravo.

When we last saw Fiona and Rhys, the duo had just constructed the Gortys Project while Vaughn and Sasha were being held hostage. Atlas Mugged ended with a significant Telltale choice for Rhys to make: trust Fiona in her ability to improvise the situation or trust the shadow of Handsome Jack residing in his own cybernetic head. Though the decision was given a lot of weight, the episode concluded before we got to see much of an effect.

As it turns out, the opening sequence to Catch a Ride plays out quite differently depending on which option was selected earlier. It’s enough of a difference that along with the review code, Telltale sent a message imploring me to play through the episode twice in order to see just how far-reaching the consequences are.

The differences are there, and they persist until about the third act, but at that point the two branches sort of homogenize together. Without giving away too much, trusting Handsome Jack unlocks the help of three characters who aren’t necessarily available to those who instead trusted Fiona. However, by the end, all three are out of the picture one way or another, despite that they could have been particularly useful.

It shouldn’t come as a surprise to anybody who has played a Telltale game in the past few years that the overall narrative threads all begin and end in the same place, but Catch a Ride does feel like an improvement in that regard, if only slightly. Though the player cannot really affect how the story ends, certain scenes play out differently enough to warrant another look.

One silly change I appreciated was that Rhys’s Echo Eye ability is corrupted if he lets Jack into his systems. Instead of the dry humor found in the default descriptions, Jack inserts his own brand of over-the-top musings. I do wish this idea were taken further; there is a section in which Rhys has to hack a computer and having a digitized version of Handsome Jack ought to have helped in that situation.

Fiona also goes through some questionable design territory with her abilities. Where her sleeve gun was previously limited, providing the possibility for interesting choices, its power is unlocked in the episode. It nullifies the opportunity cost that piqued my interest in Atlas Mugged; when I spent that incendiary bullet singing Finch’s hair off in the second episode, I thought that would be the last time.

Now it almost feels like Telltale is trying to set Fiona up to be a proper Vault Hunter in Borderlands 3. While on the one hand it will definitely be cool to see Telltale’s original characters in Gearbox’s next effort in the main series, it would detract from her uniqueness as a smooth-talking con artist were she to become another gunslinging badass.

Speaking of characters, we do get a few new cameos from the main series here, although their inclusion feels a bit like fan service. After playing through twice, I’m still not quite sure why they were there, but it could very well be something that is planned to be explained in the future. As it stands, they show up, say some funny lines, do some outrageously violent things, and advance the story in a way, but their motivation isn’t clear.

That is a relatively minor complaint, especially considering the best thing Catch a Ride has going for it is one of the new characters. Gortys turns out to be a friendly robot and she easily has some of the best lines in the episode. With the personality of an earnest young child, she feels so out of place in the dark wastelands of Pandora that I couldn’t help but be charmed. Everybody on the planet is gruff, insane, murderous, jaded, or at least sarcastic so having one character who is none of those is just perfect.

Some of Gortys’s lines tap lightly on the fourth wall; those are worth a lasting grin. There is one scene of hers in particular that had me laughing heartily, both times I played through. Even knowing it was coming, the setup and delivery were so on point that it killed. Ashley Johnson‘s voice work was perfect for the role. I don’t know how this story ends, but I hope Gortys survives the ordeal in one way or another, because Borderlands needs to keep that character around.

It may seem like a lot of my thoughts on Catch a Ride are negative, but they are minor quibbles in the grand scheme. Though I’m a little disappointed the two protagonists aren’t using their unique skills as much as they did in the first episode, the story they team up to tell is still completely engrossing.

The writing is as sharp as ever, with plenty of laugh-out-loud moments. The end of the episode has just the right amount of cliffhanger to it. Tales from the Borderlands: Catch a Ride feels like a complete chapter in the story, but now I have a rough idea for what to expect in the next two episodes. With that narrative skeleton in mind, I am looking forward to watching the rest of the series play out now more than ever.