Then again, we might not be talking about all that much. This is, after all, just the third major Sword Art Online game (fifth, counting revamped re-releases), situated along a quality range firmly within the “inoffensive” spectrum.

That said, Hollow Realization would be easy to recommend, and in fits of inspired design, comes the closest yet to really capturing what it might feel like to actually play the online RPGs Sword Art Online‘s cast are constantly engaged with. In short, it’s a game that almost warrants an an unqualified thumbs-up.

Now, if only it weren’t a Sword Art Online game… 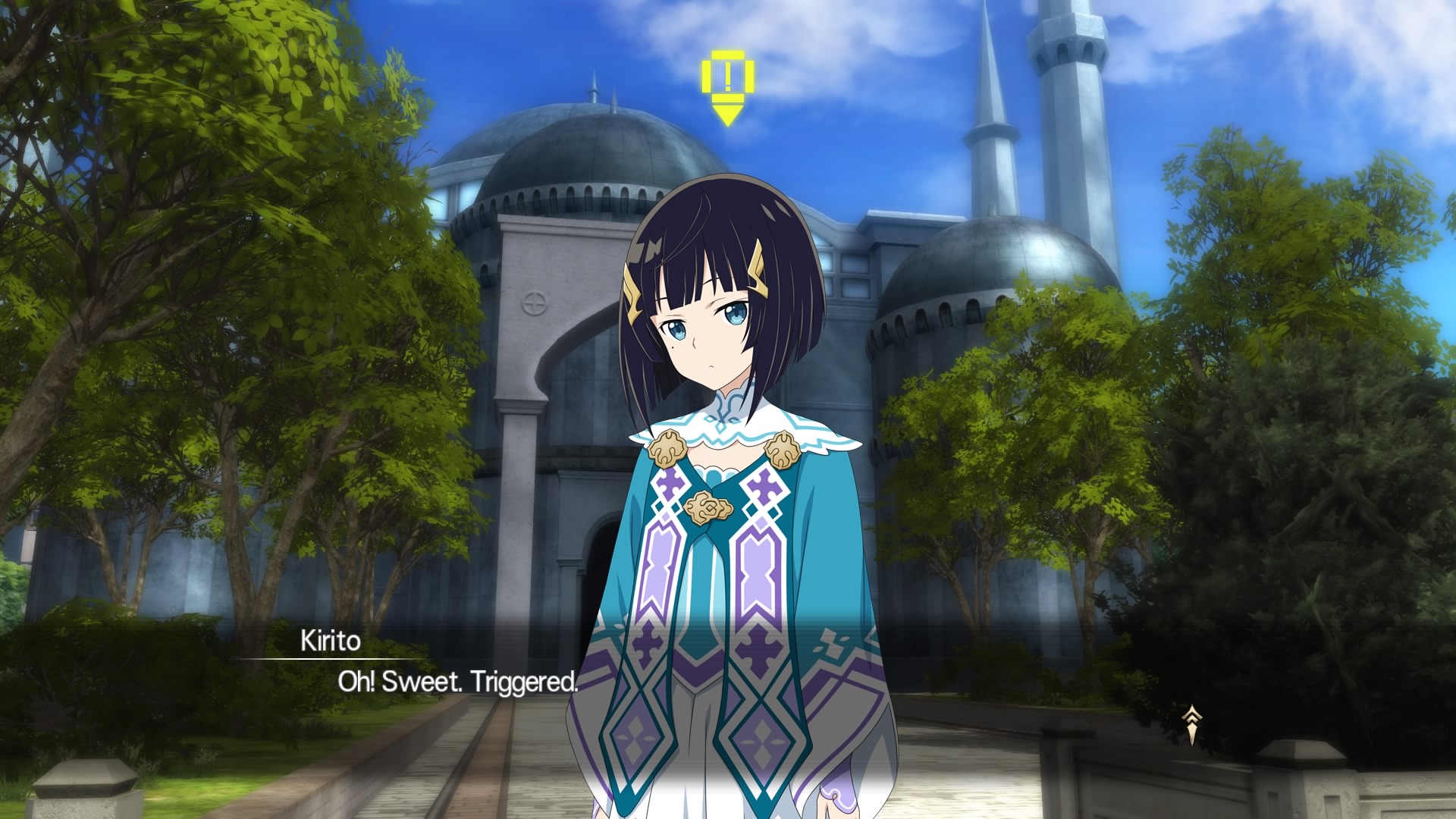 I’ll clarify that last sentence in a bit, but first, the good news: Sword Art Online: Hollow Realization is a genuine good time, mechanically. This was especially true for me, since I’ve always had a soft spot for games that try to riff on other genre’s conventions.

It was a real treat to see a single-player RPG attempt to represent the tropes and structure of a persistent online MMO, and Hollow Realization captures the aesthetic masterfully. The interface mimics the MMO look, bristling with icons and even using a faux chat window and “event log” to both track combat actions and remind players of their immediate objectives. From fake friends lists, to carefully placed uses of common MMO terminology, and even how the motion-controlled in-game interface appears to pop up near the character models when players use the actual in-game options menus, Hollow Realization is the most successful try yet to foster the illusion that one is actually playing the fictional VR online games the Sword Art Online’s characters play.

It’s effectively scratched the itch I’ve had ever since .hack had gone to pot, and that’s worth appreciating. It’s not entirely novel, of course, and is, in essence, a better-executed take on Hollow Fragment’s approach, helped along by a conveniently familiar premise. The setting for the latest anime go-around is “Sword Art: Origin,” a quasi-reboot of the original “Sword Art Online,” the game where Kirito and his pals were first trapped in a years-long life-or-death struggle. Of course, the death-game aspect has been helpfully excised from the new title, and the crew apparently feels safe enough to revisit the site of their first ordeal, now that it’s safe to do so.

In some ways, the fact that it never becomes un-safe to do so is what’s most disappointing about Hollow Realization’s narrative. On the one hand, it would be a bit cliché for them to get trapped in another death game, and in some ways run counter to the point of the stories. And yet, at least the death-game story was exciting. Like Lost Song before it, Hollow Realization has players literally just hanging out at the controls while they watch a dude and his guildies faff about in a game. A significant chunk of the main campaign’s motivation is literally just Kirito going “Hey, let’s try going to that cool-looking place off in the distance!” and then everyone going there. 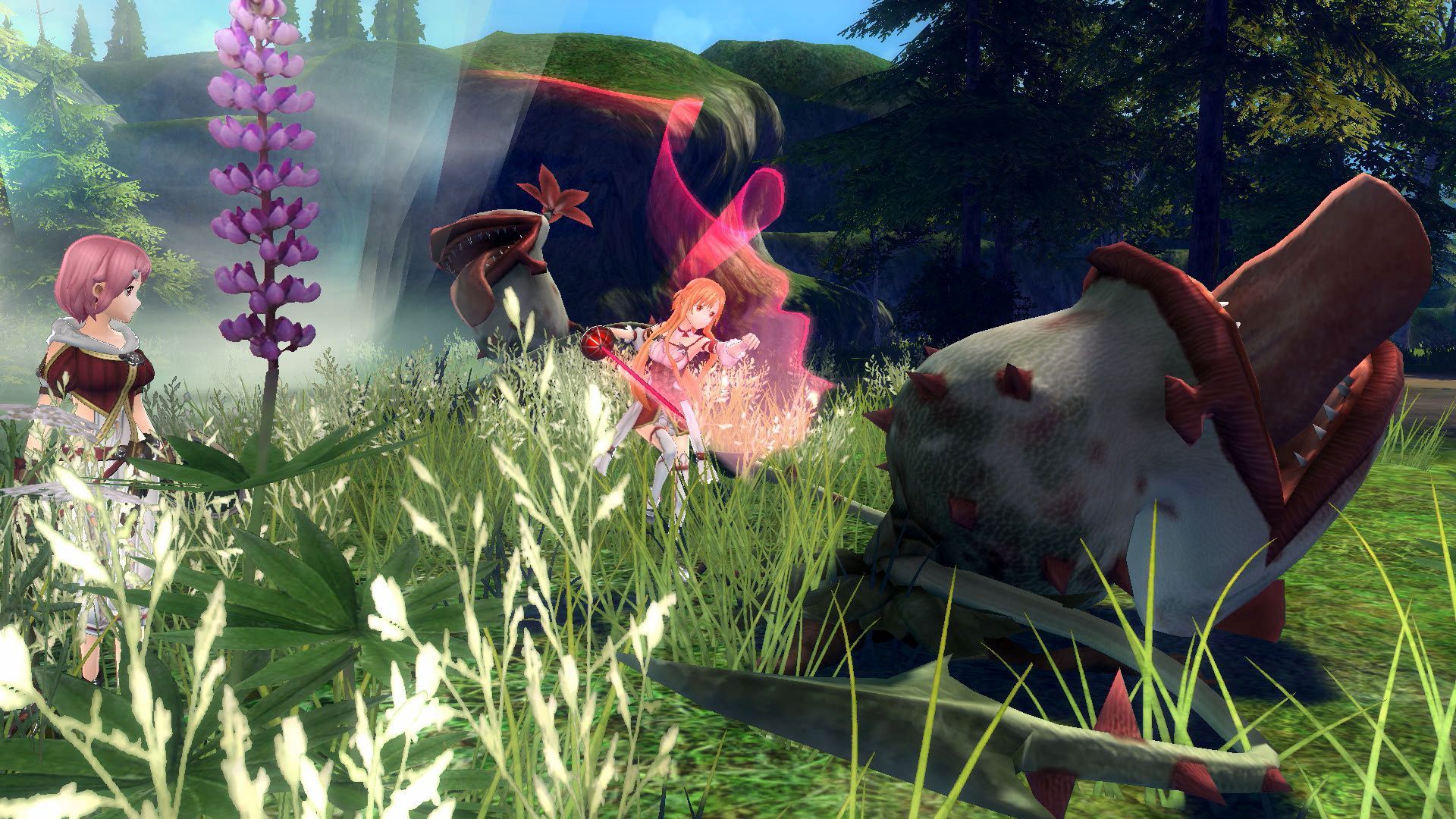 I’m not the kind of person that demands epic adventures out of every RPG. Some of the best moments in these games come when there’s little at stake, when sometimes you and your pals just want to throw a party or go on a road trip or grind some crafting materials or race some Chocobos. But there have to be some stakes, or at least a sense of progression in the characters to make the time spent seem worthwhile, and Hollow Realization fails to deliver on that front. Even its ostensible main plot, involving a seemingly sentient NPC named Premier, feels like a retread of the many “This AI character is real!” subplots that Sword Art Online has already explored. Hell, Kirito even has an AI daughter, Yui, that’s had a presence in every game so far, so this story doesn’t even get the benefit of novelty.

None of this is benefited by the deliberate languid pacing of the game, which tends to stick “story” quests in a very hazy progression between sometimes hours-long bouts of exploration and sidequest messing-about. It’s one thing to encourage players to chill out and not “mainline” everything, but it’s another to have a campaign structure so loose that I get worried that I’d somehow broken the game. 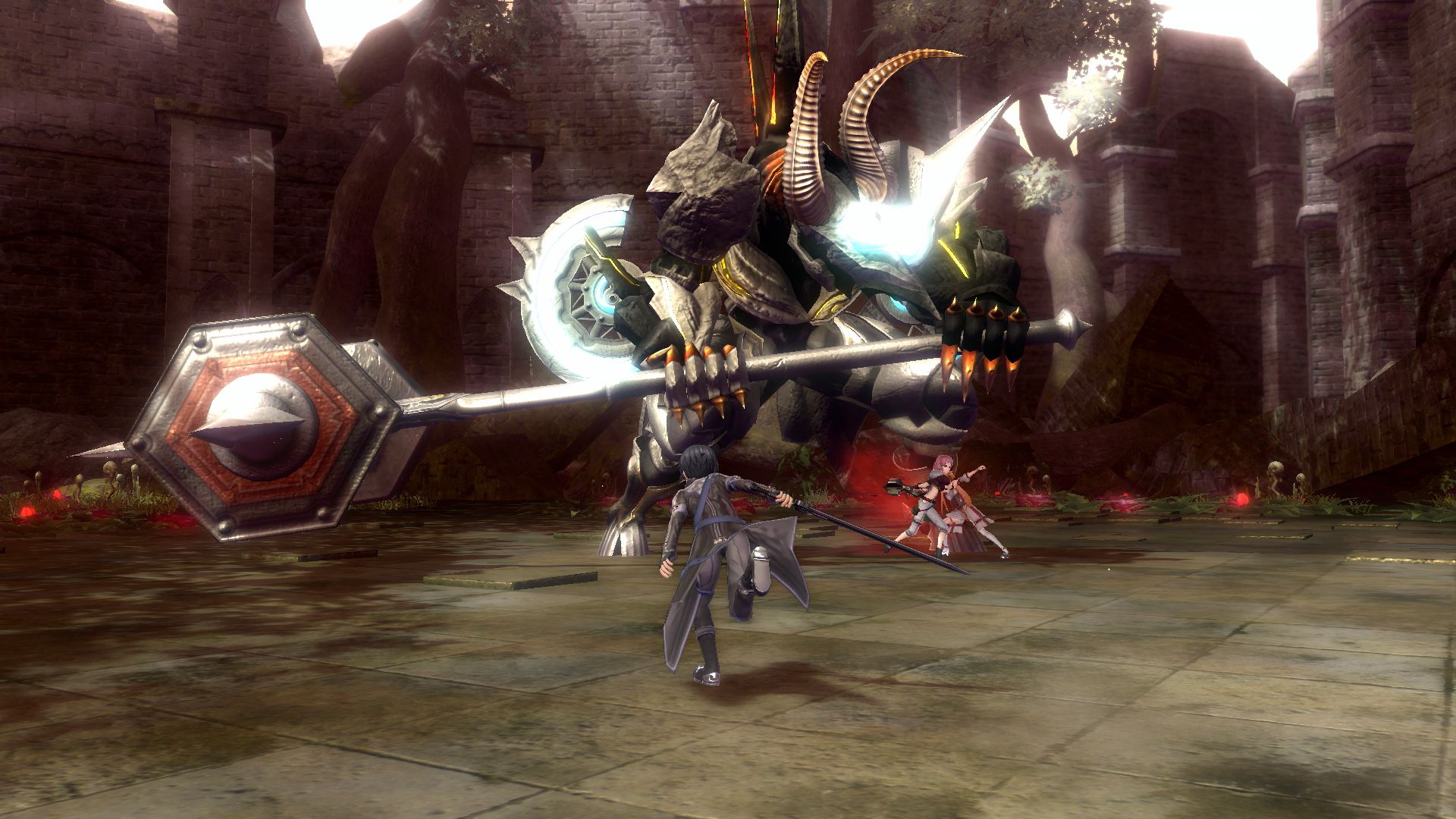 In some ways, I can’t entirely blame Hollow Realization for being how it is. Sword Art Online as a whole has never really revisited the heights of its original story arc, so in some ways one could argue that the game is staying true to form. It’s just a bigger bummer now, because this time around, the systems and technical side feel robust enough to have supported riskier, bigger stories and characterization. Gameplay-wise, Hollow Realization feels like a more successful, refined iteration of what Aquria tried to do with Hollow Fragment (and Infinity Moment before it), without the oversimplification that plagued the Artdink-developed Lost Song.

This is most evident in the combat, which cuts down on menu gymnastics and ramps up some of the more real-time aspects, while still preserving that game-within-a-game feel. Face buttons still trigger basic attacks and pre-selected “Sword Skill” specials, while pushing in the touchpad brings up an MMO-style “hotbar” to access other abilities and items. Timing and positioning have greater sway, as well, and players will need to both keep an eye on enemy attack zones and the execution of their skills to extract the greatest effect out of their abilities and party members. 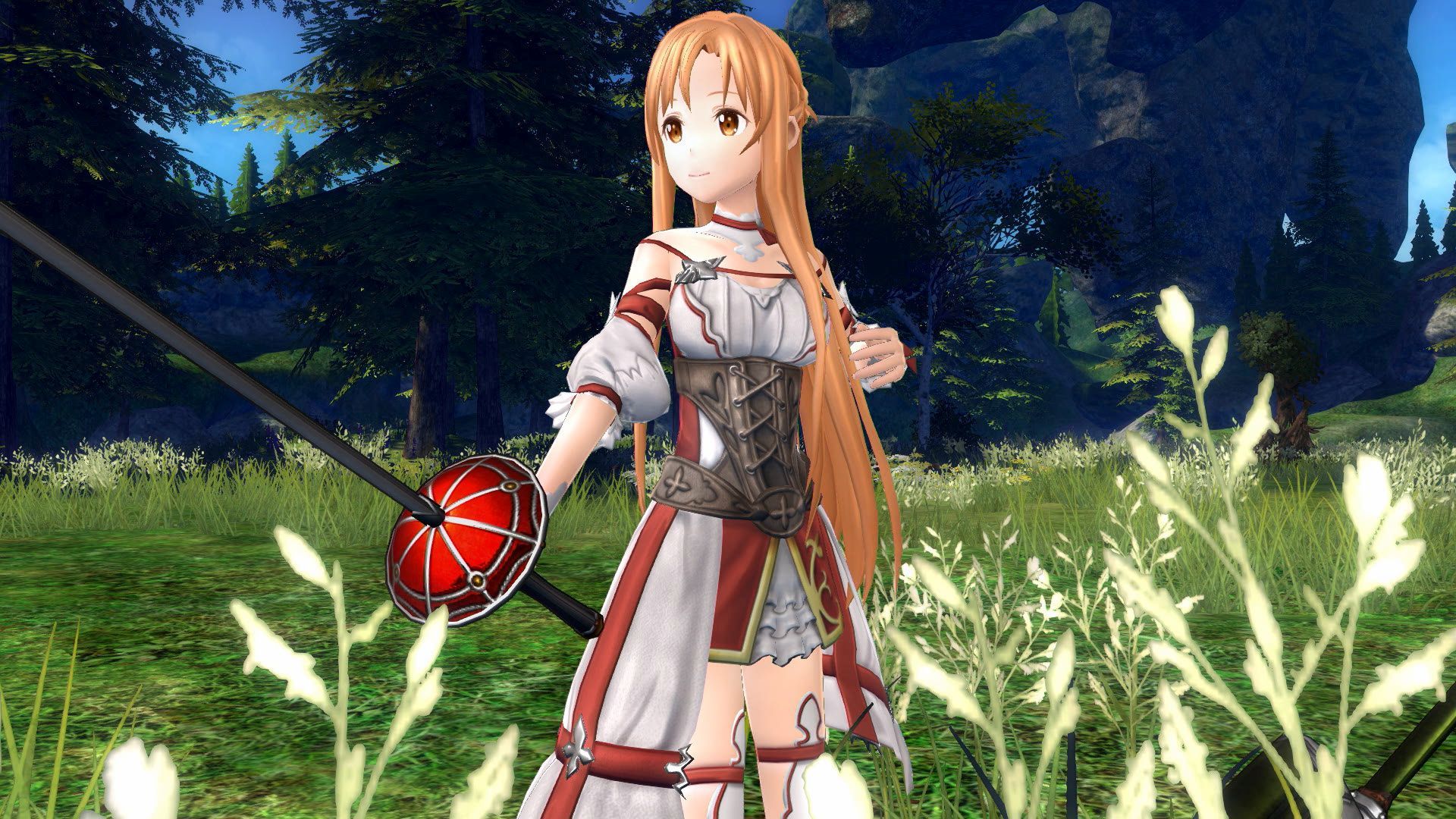 Outside of combat, Hollow Realization tries to simulate the social aspect of MMOs. Players can attempt to chat up and befriend any other player or NPC, even the random ones walking around town that aren’t part of the main cast. A button can bring up a “profile page” showing a player’s personality traits, and each personality trait (such as “Curious” or “Sexy”) comes with a series of related attributes and abilities. With enough badgering, any fellow player can be recruited as a party member, and praising them when they do good things in battle can affect their personality, combat tactics, and stat growth. It’s a clever system, though it may be slightly too subtle in practice, as during my time I couldn’t really figure out how to engage with it in ways beyond pressing a button to say “Good Job!” whenever my girlfriend stabbed a monster particularly hard.

It’s easier to engage with the upgraded visuals, though. Hollow Realization finally looks better than an upscaled PS3 game, with more detailed models and environments, and a more colorful, lush look overall. Unfortunately for Vita owners, this comes at catastrophic costs in performance. Don’t play the Vita version.