More than any other game I can recall playing, Swarm gets right to the point in its main menu screen. As with all PlayStation Network and Xbox Live Arcade titles, there are the usual options to select from by hitting, in my case, the A button.

Then, you notice a disclaimer at the bottom of the screen, warning you not to hit the Y button. So, like any good gamer, you channel all of your energy directly into your thumb, and hit the Y button with a vengeance.

Upon doing so, the white-eyed Swarmite — who has been calmly standing in the background this entire time — well, he dies. In a gruesome way. And every time you hit the Y button, a new Swarmite comes out and gets decapitated, burned, electrocuted, or what have you. 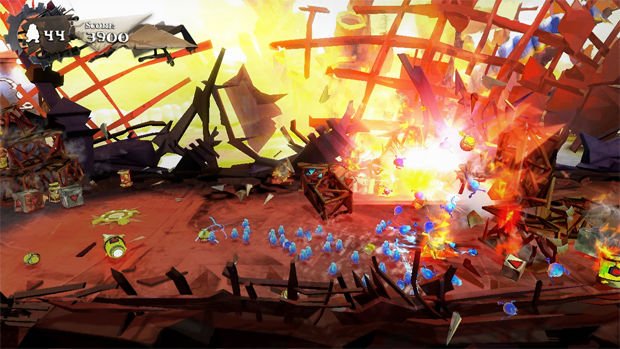 Was that intro too morbid? In practice, it’s actually pretty funny, and surprisingly light-hearted. Either way, yes — Swarm is a game about blue creatures called Swarmites who die frequently. These likable fellows have crash landed on a foreign planet, one that has seemingly been custom built to be as dangerous as possible. Luckily for us, the Swarmites are incredibly replaceable.

Swarm initially comes off as something along the lines of Pikmin. You directly control a formation of fifty Swarmites, and the way in which the mob moves isn’t unlike the aforementioned game. However, the more you play Swarm, the more you realize it’s more of an anti-Pikmin. Instead of going to great lengths to insure the survival of every last minion in your control, you’re actively allowing — causing, even — your Swarmites to die for the greater good. 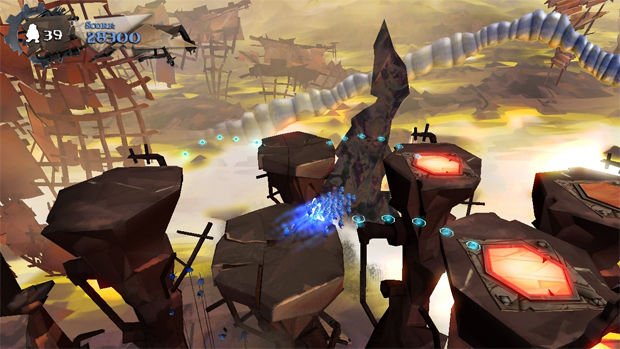 In order to progress through any given level (of which there are ten, plus two boss missions), all that’s required is getting a single Swarmite to the next spawn pool, which will refill your troops. You’d be shocked by how many times this (getting to the next pool with a single dude) is actually the case. Whether it’s jumping across falling platforms, or dodging fire-breathing machines, or charging forward into destructible items, your fifty slowly whittles down.

If you run out, however, you simply go back to the last checkpoint. This brings us to the main point of Swarm: merely beating levels isn’t enough. No, you have to score enough points to progress. Throughout any given level, you will earn glowing collectibles, which boost your score multiplier. In some instances, you’ll be asked to, essentially, run through a level at breakneck speeds without dropping your multiplier once.

Swarm ramps up the difficulty in its score requirements rather quickly. On two separate instances, I had to play a level four or five times before I could hit the goal; for some people, this is going to be impossible to deal with in terms of their gaming preference. It was manageable for me personally, and I’ll add that the levels are very repayable — especially when you consider the hidden items, and leaderboard competition. With the exception of one particular level, it never feels too “cheap” when you narrowly miss your goal by a few thousand points. 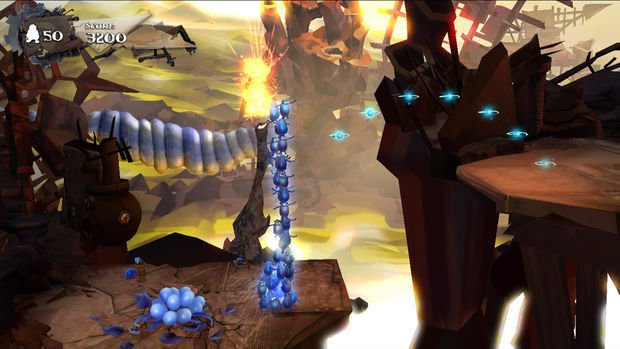 I was able to brute force my way through Swarm in a few hours, and could easily double — triple? — that amount of time by going back and getting more competent-looking scores. As we are seeing more and more, this is another case of quality over quantity.

The use of leaderboards is also commendable. In actual levels, your score is always present, and on the map screen, your ranking is integrated nicely. Heck, you’re even asked why you aren’t as good as InsertGamertagHere by your giant alien mother. This stuff was clearly not an afterthought, which is nice to see. That said, I did have a couple of instances where the game froze, and it seemed to happen when my score was being updated on the global leaderboard. You can switch what scores are outputted, though, and that worked out for me.

It may not look it in the screenshots, but Swarm is fast-paced, and absurdly hectic when you’re playing it as intended. Controlling the Swarmites feels very natural, more so than I would have ever guessed, and the production values on the whole are above your average console-bound digital distribution title. It’s an out-of-nowhere game for a lot of you, and I suggest giving it a try — assuming, of course, that the prior talk about demanding score requirements doesn’t scare you off.