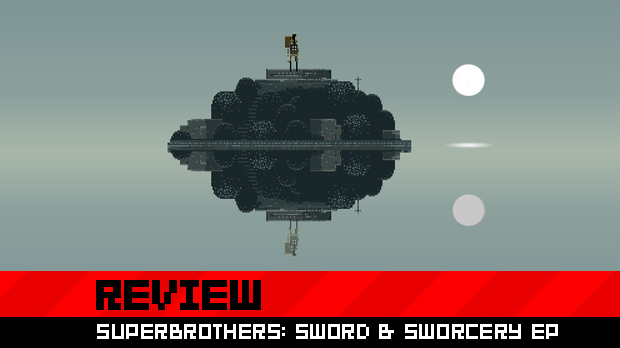 Trying to describe the experience of Superbrothers: Sword & Sworcery EP is a lot like the experience of playing the game itself. Depending on what angle you’re looking at it from, you’ll get an entirely different perspective. A masterful collaboration between artist and game designer Craig Adams, musician Jim Guthrie, and the gang over at Capybara Games (Critter Crunch, Might and Magic: Clash of Heroes), this is a title that is smashingly new-school in its extreme old-school-ness.

From one point of view, SB: S&S EP is an avant-garde deconstruction of the Zelda story, where smatterings of Carl Jung’s archetypal psychology literally dance naked in the forest with a Twilight Zone sensibility of presentation that will keep your brain just slightly off kilter. With a rich rock opera structure and a self-aware design, the fourth wall is broken so often that all Kojima’s horses and all Kojima’s men couldn’t put it back together again.

From the other, the game masterfully executes the mechanical framework of a classic PC adventure title, where exploration, puzzle-solving, and light combat all take advantage of the touchscreen and tilt environment native to the iPad.

For you gameplay purists who are already turning up your nose at my delight in the thematic content, let me put your fears to rest. Even with the ambitious way in which it challenges one’s usual gaming mindset, SB: S&S EP refuses to take itself too seriously, and it comes to the party replete with a stockpile of your most precious of currencies — fun.

SB: S&S EP is the story of The Scythian, a female warrior who is on a mission to retrieve The Megatome. That’s all the game starts you with, and for the purposes of not spoiling the experience, I won’t go much further than that. Suffice to say that a timeless evil is awakened (of course!), and The Scythian must go and solve the mystery of things in order to acquire the stuff that she must take to the place to destroy the dude. And that’s really the beauty of the narrative in this game; it is intentionally a Mad Libs structure for game stories. Filling in the blanks with entirely different names of people/objects/places would evoke an almost identical experience.

Like Joseph Campbell’s The Hero With A Thousand Faces, SB: S&S EP reminds us that adventure gaming is just an endless retelling of the monomyth – the same hero’s journey over and over, but dressed up in different clothes. Where the game’s narrative excels is in making this point in a playful way; the writing is smart, snappy, and funny.

A cast of interesting stock supporting characters gently support the story and provide comic relief while staying mostly out of the way. The woodsman, Logfella (voiced by the perfectly deadpan Robert Ashley), Girl, Dogfella (the dog), and The Archetype (who functions as the narrator) all add to the experience in an engrossing way.

The game doles out information in Twin Peaks style, where questions are answered, but still succeed in spawning a whole new list of questions. The story is advanced by interacting with the environment and characters in it, in classic point and click adventure game fashion. Additionally, once The Scythian acquires The Megatome early on, she is able to read the inner dialogue of other characters, including herself and the narrator.

Keeping up with the thoughts of each of the characters provides vital information on where to go for the narrative, tips for gameplay and combat, and just plain weird subconscious psychobabble that makes for a warped and welcome break to the rest of the experience. I quickly grew fond of checking to see if Dogfella had any new thoughts for me to read.

Visually, the game is unlike anything you’ve ever seen before while still feeling instantly familiar. Craig Adams brings a unique form of pixel art to the game, evocative of the ancient gaming era of the Amiga and Commodore 64, without actually working directly in either style.

I can’t say enough about what this game manages to accomplish with such a minimalistic palette. Lush, detailed backgrounds far surpass the old Sierra and LucasArts adventure games that SB: S&S EP is revering and emulating while utilizing an even cruder toolset. Simple, blocky character models impressively manage to say everything they need to with both their design and animation.

Coupled with the gorgeous visual style is an equally attractive sound design. This is a game that practically demands to be played with headphones on. Effects are done extremely well; from the full, realistic sounds of weather, to the ephemeral noises of spirits and sworcery, to the arcade-like sounds of combat and other gameplay actions, everything that enters your eardrums has been meticulously planned. Especially the music.

Oh, the music! SB: S&S ends in EP for a reason – the game is the music almost as much as the music is in the game. A vinyl record is the visual conceit for the game (the first thing you see when you boot the app up), and it is a structure that pervades the entire experience. Sparse fantasy instrumentation (think organs) combines with modern rock and roll sensibilities and classic 8-bit video game scores to produce a truly memorable soundtrack that I will be purchasing as soon as Guthrie gets around to releasing it.

The entire game gives off the same epic vibe I used to get as a child, looking at album art for vinyl records like Yes’ Close to the Edge. The fantastical art combined with the the sweeping orchestral rock feel used to set my imagination to work, and this game produced the same emotions, buoyed by the fact this album cover has touchscreen functionality and interactivity.

The integration of the music with the gameplay is another point of strength. Where other games have tracks tied to physical areas, SB: S&S EP contextually triggers music to match events and player actions. Revisiting the same areas later in the game will result in different music depending on what you have already accomplished. I found myself forgetting gameplay for long periods of time so that I could listen for just an extra bit longer, and I never once bemoaned losing a boss fight because it gave me a chance to experience the accompanying tune all over again.

Reviewing a title like SB: S&S EP is difficult since the art and the musical components are just as prominent as the game itself. But believe me, there’s a game there, and an elegant one at that. Squarely falling in the adventure game genre, the majority of the action takes place with the iPad held in landscape mode; the game’s exploration and puzzle-solving are conducted this way.

Simple inputs that work extremely well for the touchscreen environment get your hands out of the way as much as possible, keeping you looking for necessary details or just enjoying the scenery. Tap-and-hold moves The Scythian in the general direction of the hold, while a double tap will move her to a specific point or cause her to interact with an object in the environment.

When not in combat, tilting the iPad into portrait mode allows the player to open The Megatome. Shifting to portrait mode is also how the player initiates and plays through combat sequences. Combat is a timing and rhythm based affair, which some have likened to Punch Out, since it’s a simple two button (sword and shield) input system.

However, since the sequences are slower and more deliberate than Punch Out, I prefer to draw the comparison to other games in the tradition of the genre, like the original Hero’s Quest (Quest for Glory). I implore you not to confuse simple for unsatisfying; between the amazing visuals and the way in which combat meshes with the music in a very Bit Trip-like fashion, I came out of some of the battles feeling truly elated.

Puzzle-solving was a fair mix of both easy and difficult, and avoiding spoilers, some of the ways in which you utilize the touchscreen and even the iPad itself are both pleasingly novel and intuitive. Many of the tasks were just as solvable using the logical, “look around and analyze the environment” approach as they were by using the “fiddle around and touch everywhere on the screen until you get results” method. A few of the puzzles did have similar solutions; with full play-time coming in at around 3 hours I would have liked just a little more variation given the length. However, that’s truly a single minuscule complaint in the context of what the game has to offer as a whole.

When all was said and done, I was both emotionally moved and intellectually stimulated, with plenty of smiles, snickers, and a few outright belly laughs along the way. Simply put, it was great fun. Superbrothers: Sword & Sworcery EP is a game that takes real chances to stretch the gaming medium without sacrificing the joy of play and discovery that makes the medium great. It’s a bold experiment in having the adventure game genre take a meaningful, humorous and fun look at itself. Gaming doesn’t need to find its Citizen Kane, but it may have discovered its Rosencrantz and Guildenstern Are Dead.