Super Stardust HD is considered one of the premium PlayStation Network titles available, and one of the most dazzling retro re-imaginings a nostalgic gamer can get his or her hands on. It’s a perfect choice to showcase the PlayStation Vita’s digital offerings, providing simple gameplay that’s easy to get into, alongside rich visuals that show off the new handheld’s technical power.

Super Stardust Delta will be available at launch, and acts as a great compliment to the deeper launch offerings. 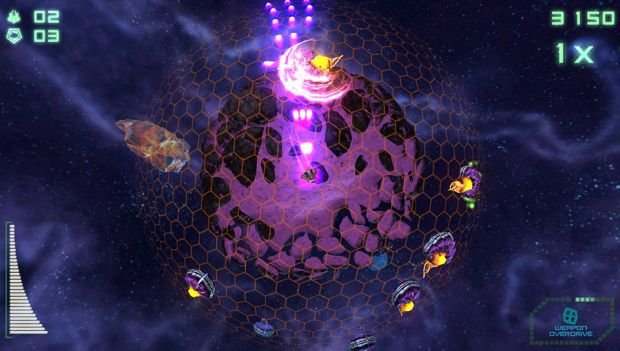 Super Stardust Delta isn’t interested in trying too many new things with its core gameplay, wisely providing a familiar scenario that already works well in a portable environment. A simple twin-stick shooter that gets by on gorgeous visuals and fast-paced action, Delta is a faithful little spin-off that recognizes the need for traditional input alongside the Vita’s fancy new interface.

The main mode can be played using a “Pure” or “Delta” control scheme. Both controls make excellent use of the twin-stick setup, but Delta mode will include front and rear touch input for powerful new abilities. The front touchscreen sends out missiles while the touchpad opens up a devastating black hole that sucks enemies in without mercy. The trusty EMP is utilized by shaking the Vita system.

Although Delta is an intriguing new experience that gives players more abilities, I prefer the traditional Pure mode, as it feels more streamlined and convenient to play on the go. It’s amazing that, before now, something as simple as a twin-stick shooter couldn’t be adequately brought to a handheld gaming system, and Super Stardust is worth picking up just for that perverse novelty. It helps that the game is quite satisfying, too. 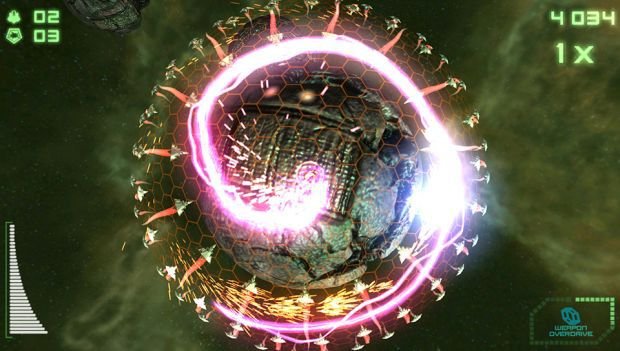 As with Super Stardust HD, Delta nails that addictive, “one more go” quality that players have come to expect from the series. While much of what is presented has been seen before, that desire to beat one’s high score, face off against lumps of space rock and drown in power-ups is as effective as ever. As players switch between “fire” and “ice” ammunition to clear out enemies, destroy asteroids and tackle intimidating bosses, only the most fussy of gamers will struggle to be satisfied.

There’s certainly an air of “been there, done that” with most of Delta‘s gameplay. Outside of the unique visual style and fast pace, Delta plays it incredibly safe and doesn’t go above and beyond to blow anybody’s mind. That may have been smarter than trying to reinvent a wheel that was fine the way it was, but those who gorged on prior Stardust games or similar twin-stick shooters won’t find much more than a smaller version of what they’ve already enjoyed.

To its credit, Delta throws out a selection of interesting minigames designed to take advantage of the Vita’s input. In one such distraction, players must “crush” asteroids by trapping them between fingers on the touchscreen and touchpad. Another uses the gyroscope to aim and shoot at waves of enemies. None of these minigames are especially astounding, and exist solely as obligatory exploitation of the Vita’s capabilities, but they’re inoffensive and worth trying out at least once. 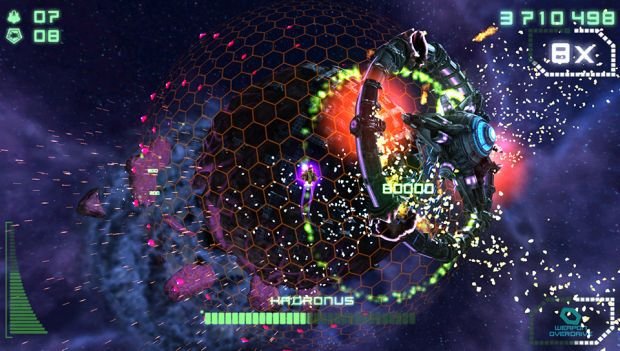 As expected, the game looks utterly lovely and has a great soundtrack. The colorful explosions especially appear beautiful on the Vita’s large, bright screen, and while it lacks the attention to detail and special visual effects of larger launch titles, it boasts a graphical style that works really well in a handheld environment.

Super Stardust Delta isn’t a revelation, and it doesn’t do anything truly spectacular. It is, however, a solid and enjoyable experience that will keep players returning, providing simple arcade action perfectly suited to a portable system. As one of the least expensive downloadable offerings, Delta makes for a great early look at what Sony’s new hardware can do, and should be a worthy consideration for those looking to get some instant gratification. You really can’t say fairer than that.