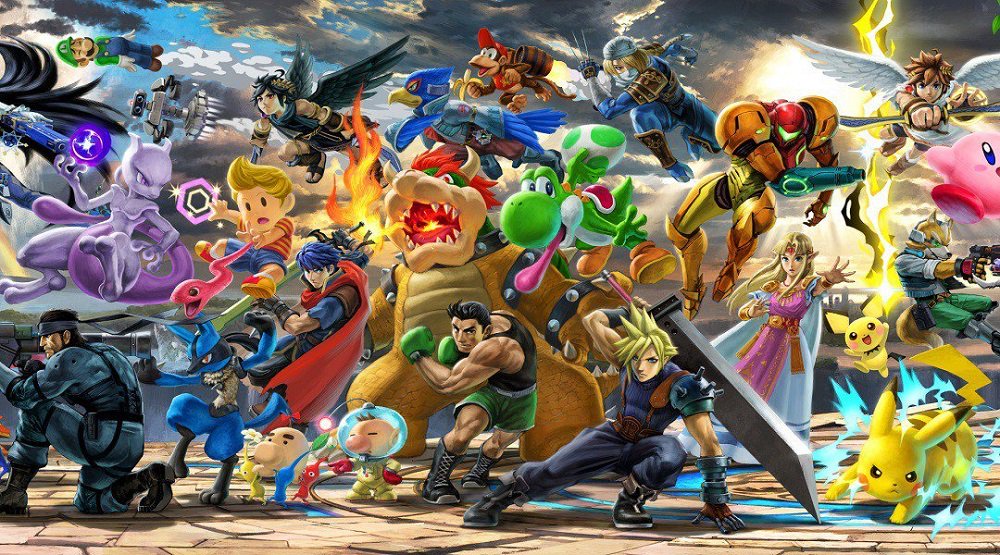 In many ways, Super Smash Bros. for 3DS/Wii U was already an “all-star” outing. Sure it wasn’t 100% complete but given that the vast majority of fighting games never reach that bar, it was an acceptable loss. Nintendo ambitiously delivered the series on two platforms at once, added plenty of new content, and even threw amiibo in the mix, which became a smash hit of its own. It was a triumph.

Of course director Masahiro Sakurai would try to outdo himself with Ultimate.

Well, isn’t the beginning always the best place to start? Let’s kick off with the fundamentals.

Smash is a fighting game, period. I never understood the shade thrown at it because of its colorful cast (or the similar hate toward “anime fighters”), because it checks all of the right boxes and then some. This is a technical skill-based venture (especially with the Street Fighter III parry-esque Powershielding system) with all of the usual suspects and Smash Ultimate preserves that legacy well. I’ll spare you from chucking the giant roster list in here, but the brand new combatants are Inkling, Ridley, Simon Belmont, King K. Rool, Isabelle, and Incineroar (Piranha Plant is also confirmed but coming later, on top of several other DLC characters).

Smash Ultimate also fully embraces the idea of similar fighters (typically referred to as “clones”), known as Echoes. New Echo Fighters include Daisy, Richter, Chrom, Ken, and Dark Samus. When you compare that to Smash 4‘s whopping 21 new characters, some of which were absolute mind-blowers, it doesn’t seem like much, but the sum of Ultimate‘s parts is greater than any Smash before it. It’s an important thing to remember as I move on to the many hits and few misses of Ultimate.

Echoes are a fantastic compromise. As a Ken fan I’m glad that he’s incorporated, and sometimes, especially in a party setting, the power to just pick a character you’re cool with and chill out is more important than iFrames. That’s pretty much what Ultimate (like Smash 4 before it) is all about. It’s an even bigger feast for fans with the refinements that pros have begged for since Melee became a professional sport. Sakurai and his team have risen to the occasion twice now.

But while Ultimate does collect pretty much every bit of Smash history in one place, some of the new stuff doesn’t hit as hard as the series has in the past. There’s nothing wrong with the new stages but they’re very much iterative work of previous designs. New Donk City Hall feels like every other “moving platform that takes you places” board, and the Breath of the Wild-inspired Great Plateau Tower, Splatoon-flavored Moray Towers, and Dracula’s Castle from Castlevania are all very cramped: beyond the bosses that pop out in the latter you’d be hard-pressed to find a reason to consistently play them over some stronger existing maps.

Several of the new fighters elicit that seem feeling. Ridley is a powerhouse and more threatening looking than a lot of other villains (it’s almost goofy how dark he is), but his kit could have used more refinement to draw out his animalistic, win-at-any-cost nature. Isabelle, as adorable as she is, is a lot like an Echo Version of a Villager right down to the same Final Smash (it just features a town hall instead of a home). Ultimate moves into more compelling territory with the Inkling. Inking up people doles out more damage, at the cost of having to micromanage ink levels to ensure that your abilities are ready. I’m not necessarily going to play it consistently but the Inklings are faithfully adapted and I love seeing them, especially with the variety of skin options.

Simon/Richter, on the other hand, are a home run. The axe, the cross, the holy water items, they’re all here, and they work wonderfully within the confines of Smash to the point where you really wonder why they didn’t make it in sooner. King K. Rool: all I can say is “yes!” He’s hilarious, bumps people with his stomach, flies in with a makeshift propeller, and needs to recover his crown when thrown, elevating himself over the distinction of a joke character. Incineroar is similarly great (and surprisingly mobile), and I can see Zangief Echoing him eventually, not the other way around. I would have put many more Pokémon in first (Hawlucha could have done the job) but I’m happy.

Now here’s the initial annoying thing about Ultimate: you have to unlock basically all the characters. Most of them will come easy (you can get them all by playing a ton of versus matches or individually through the World of Light campaign or Classic Mode), but it’s irksome all the same. Here’s my side tip: play a few World of Light levels at a time, back out to the main menu, and you’ll consistently encounter roster-unlocking challenger fights. As someone who savors unlocks I didn’t mind it but I thought I’d throw this passage in just in case.

There’s plenty of locales to battle on beyond the “alright” ones I mentioned above. 103 stages is just an unbelievable milestone, all of which sport an “Omega” (competitive) mode that mirror Final Destination’s restraint.

I think it’s important to hone in on that Omega inclusion, because Sakurai wanted to satisfy every type of player here. Whether you’re a fan of items or not or pretty much any other stat-based minutiae, there’s a toggle for it. This includes concessions for tournament play and all sorts of wacky modes where you can only play characters once (Smashdown). Oh, and there’s local play, wireless multi-Switch sessions, online, and support for Joy-Con, Pro, and GameCube remotes (the 8BitDo Gbros. adapter also works great!). They literally thought of everything, though I’m sure people will find some way to send Sakurai some hate mail.

As for the core modes, I’ll focus on World of Light. This is your main story campaign, a complete upgrade from the underwhelming Subspace Emissary, with its own cutscenes and (predictable but cool-looking) narrative. It splices in pretty much all of the new concepts including the Pokémon-esque Spirits, which people are going to be spending a heck of a lot of time on (more on that in a moment).

As you make your way across a giant world map with its own twists, turns, and puzzles, every subsequent fight is a spruced-up version of a regular battle with lots of clever modifications and rulesets. Spirits will influence the way a match plays out, with “giant” and “tiny” modifiers in tow for matchups, as well as your standard elemental mixups. Like if Bomb Man is the guardian Spirit for a level you might fight Mega Man, who uses lots of explosives and starts with a bomb. That sort of thing.

It’s fun to see what the team comes up with and how they keep it going for hundreds of little skirmishes. The same goes for the world map, with tons of fanservicey secret locations and homages that I won’t spoil here. Maybe you’ll come across a zone where you need a certain item to enter it, but to get that item you need to beat a mission that involves a tough poison mist that seeps your health: leading you to find a Koffing Spirit to increase your poison resist. The art is gorgeous and reminds me of something from the SaGa Frontier series or another golden era JRPG.

It’s ambitious but there’s an end to that rope. There are way too many “the floor is [lava, poison, electricity]” stages and once you acquire a Spirit that increases your resistance to said hazards (or makes you entirely immune) they become trivial. It’s inoffensive bloat though, as I enjoyed the vast majority of my first 15-hour (70%) clear. After that it’s off to locate some Spirits you missed and tackle the New Game Plus option.

In moderation (and within this Light vacuum), Spirits are interesting. Playing through World of Light with different powers and perks makes sense, as they shake up the way you approach the campaign and how your enemies respond in turn with their own spirit powers. Spirits are wild. They can be anything from common chumps like Gravity Man to obscure folks like Kyle Hyde from Hotel Dusk/Last Window. Basically, if anything ever appeared in a Nintendo-adjacent capacity before, it’s game. Some of them can evolve; it’s a whole thing.

Where Nintendo starts to go overboard is experimenting with timed events, a la Hitman‘s targets with a separate “Spirit Board” challenge mode (they literally call it “target list”). The idea is that you endlessly (and mindlessly) equip, re-equip, re-tool and min-max out a “party,” consisting of Smash fighters and Spirits. Some of you will love it. Others will write (engaging) fan fiction about it. But it’s just not for me. Most of the battles feel the same, and an extra “5% basic attack damage” sticker isn’t going to get me excited. Given that you already have enough of that in World of Light (which feels like a real RPG with progression and boss fights), I’m good. The same goes for turning Spirits on in regular games, another thing some of you will dig.

There are so many other activities to do though beyond grinding Spirits. Tourney mode supports up to 32 players, which beats having to draw everything up on a whiteboard like I did back in my younger years when I hosted fighting game tournaments. I’m really digging the insanity of Smashdown, as you race to pick fighters before they get locked out forever. It’s a great heads-up gametype to play when people are getting bored of the usual matchups. Same with Squad Strike, a tag-team variant for casuals and pros alike. Classic Mode (the original “story”) also returns, with unique routes for each character and a runner-esque minigame. Oh and there’s always regular battles.

For the first time in a long time, I’m overwhelmed. There’s so much to do either by yourself or with a group, not accounting for the fact that I needed to bring every single character into the lab (training) and try out each stage, which I did for this review. I didn’t even mention the music player (which kids in Japan will love) that pops 800 tracks off like a boom box. The score is its own achievement with famous collaborators in tow and beautiful remixes aplenty. I spent an hour making Mii fighters for chrissake.

I’ve used phrases that evoke the monumental achievement that is Super Smash Bros. Ultimate a few times in this review and I can assure you it’s not hyperbolic. Despite that a lot of the old content isn’t as hard-hitting the second, third, fourth, or even fifth time around, the fact that it’s all here, and in a manageable file size, is more than enough. After this (and Geno/Waluigi DLC) Sakurai can rest easy.

[This review is based on a retail build of the game provided by the publisher. Online play was not active for this review but we can cover it separately.]