One of the great things about art is its ability to surprise you. Most people know what they like and don’t like, but every once in a while there is some piece of entertainment that comes along and blows away expectations. You think it’s going to be awful because of the trailers or the cast or whatever, but when you actually take time to experience it, you find that initial impression did you a disservice. This art you thought you’d hate is actually something that strikes a chord with you, teaching you a valuable lesson about not judging a book by its cover.

But enough about Deadly Premonition, let’s talk about Super Seducer. 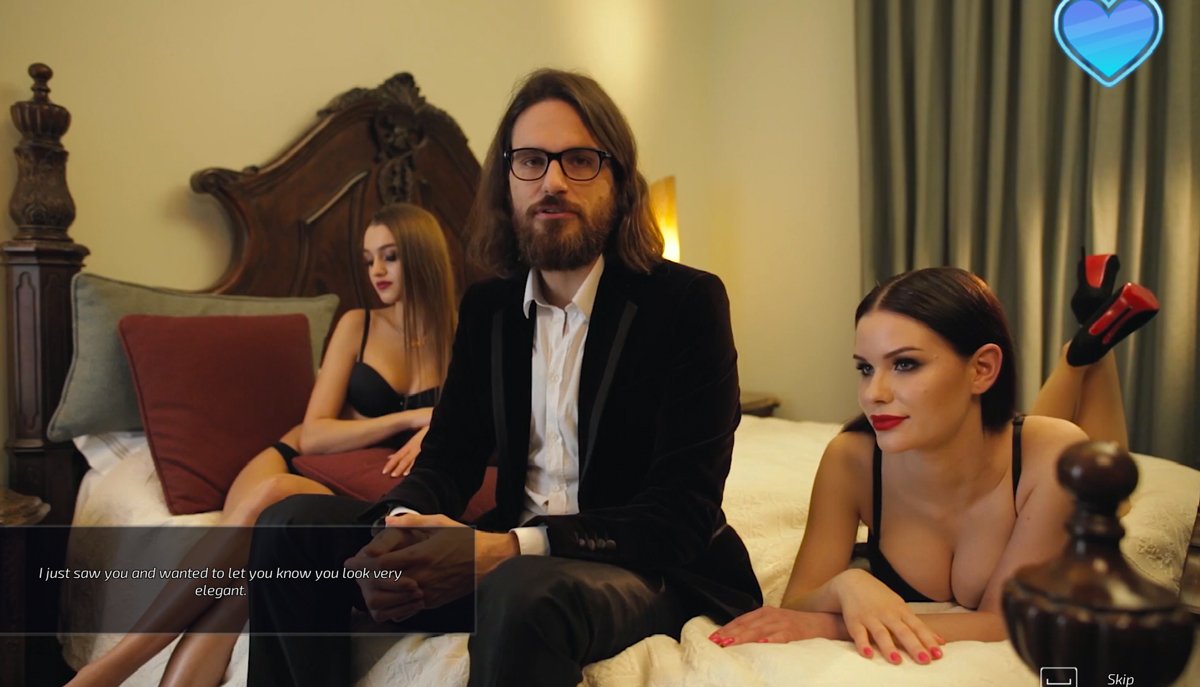 Super Seducer: How To Talk to Girls takes place in a fantasy realm where every woman you see is down to fuck. Whether she’s a coworker, a friend, a stranger on her way to feed almonds to squirrels — as you do — or just a woman in desperate need of a sandwich out for a stroll in the park wearing high-heels and a tight-ass mini-dress, these women are all conquests begging to be conquered and this game says it will show you how to do just that. Across 10 episodes, Super Seducer gives players the tricks of the trade mastered by Richard La Ruina that are “pretty much guaranteed to work” in a variety of situations as long as the women you’re hitting on are being paid to appear in your crappy video game.

You might be wondering who Richard La Ruina is. Well, this Eurotrash-looking motherfucker who sounds like Russell Brand after a lobotomy is a dating coach and author of advice books The Manual: What Women Want and How To Give It To Them and Models: Attract Women Through Honesty. He’s basically Mystery from VH1’s The Pickup Artist but without the silly hat and suppressed Canadian accent.

Every episode is presented as an opportunity to get a phone number, score a kiss, or have sex with either a stranger or somebody you know. Basically, a tamer and non-animated version of those Jake’s Booty Call web games from a decade ago. Episodes feature videos of La Ruina’s interaction with the women that pause when players are presented with multiple options on how to proceed. Each decision has one of three outcomes: either the date continues perfectly because you made the right choice, the date continues but you could have made a better choice, or La Ruina gets shut down and generally acts like a dick.

That is if you can make the videos run for you. This was supposed to be a two-person review with Wes Russow but his computer couldn’t run the game. On my 2013 MacBook Pro, the video in every episode would stutter and stop frequently while the audio continued unabated. I guess my computer just isn’t powerful enough to this game but is able to play BioShock Infinite at 30fps with medium-tier graphics no problem.

Anyway, after you make a decision and the scene plays out, a bearded La Ruina will appear on a bed with two prostitutes in varying degrees of undress depending on how well you did. It’s here he doles out advice and explains why your choice was correct, okay, or flat-out wrong.

At least he attempts to dole out advice. Sometimes he berates you by calling you a girl. Other times he seems so uninterested in his own fucking game he barely gets out one sentence before sending players on their way. Some of the advice is actually good in that it’s just telling guys to not be assholes. Seems pretty obvious if you’re a normal person and not the type of guy who spends 16 hours a day shitposting online. Other morsels require further study. Tidbits like the “Best Friends Test” or the “Cube Test” are no doubt more fluently explained in one of his books than they are here, and as a result, sound like bullshit lines guys make up hoping to impress stupid women.

Helping a douchebag try and score could have been minimally interesting if anyone involved in this production had an ounce of personality to them. Besides Shanna Vincent, who seems destined for a one-episode appearance as a girl Rajesh Koothrappali embarrasses himself in front of during The Big Bang Theory’s 23rd season, the Melania-sounding women in Super Seducer are so goddamn wooden you wouldn’t catch crabs from them, you’d catch termites.

La Ruina himself may very well be the most uncharismatic man I’ve ever seen. He makes Ivan Drago look like Gene Kelly and his delivery of the astoundingly awful dialog reaches The Room heights. Between what is said and how it’s said, I honestly can’t tell you if the game was scripted or they’re all just terrible improv actors. I wrote down several of the lines, but my two favorites have to be “We’re girls, we always have problems” and “We can go to the fashion show,” the latter of which La Ruina delivers with all the hutzpah of the Family Guy foreign guys who have been living in the US almost long enough to sound American after taking a handful of downers. The Super Seducer press release has the term “laugh-out funny” in it, but you should know this game’s idea of a joke is making a blue dress/gold dress reference in 2018. 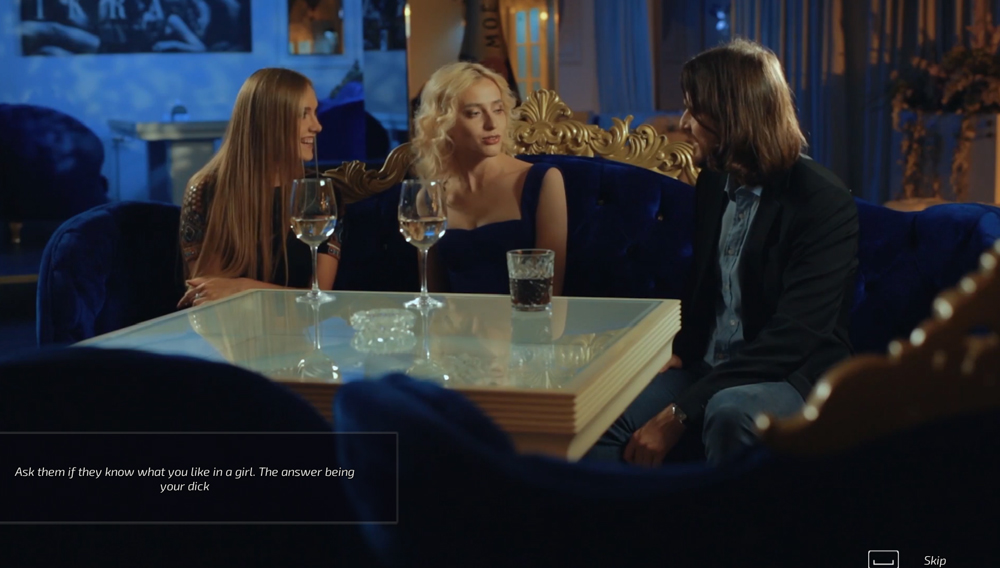 Yet despite that, despite everything I have written to this point, La Ruina’s tips will probably work on some women out there. I’ve been to the bars and seen women fall for shittier pick-ups than these. If Sex and the City taught me anything, it’s some women want to fuck just as much as men do. There’s a sea of Samanthas out there just waiting to get tore up, but they’re not looking for you. Rather, they’re looking for the best version of you and this game does nothing to educate men on that.

Super Seducer assumes the people it’s giving advice to are awesome and attractive guys who know everything they need to know except for how to start up and carry a conversation with the opposite sex. What it doesn’t tell you is how men should dress (fit is everything), how to find your right hairstyle, proper cologne usage, or how to be a generally interesting man who has hobbies and interests outside of PlayStation to talk about when trying to meet women. It’s easy to get laid when you’re hot, less so when you look like Steve Bannon, dress like Bill Belichick, smell like Robert Pattinson, and have the personality of Steven Seagal.

That’s why so much of this feels disingenuous. I never felt like this game was teaching me how to pick up women, but rather showing me how to pick up women if I somehow morphed into Richard La Ruina. It’s impressive in real life to see a confident man walk up to a strange woman and get her phone number. It’s not impressive at all when everything is poorly scripted. Learning how to pick up women from a game is like learning how to figure skate from a YouTube clip: you may think you know what you’re doing, but chances are when you actually get out on the ice, all that “knowledge” won’t be worth a damn.

In the lead-up to its release, there was some to-do about Super Seducer being sexist or sleazy. Its image wasn’t exactly helped by having the lead actress put out a statement where she says “I do firmly believe the game puts women in a powerful role,” because, having played through it, I know that’s complete bullshit. In reality, Super Seducer: How to Talk to Women is too stupid to be sexist. It’s a relic from the Entourage era we’re all better off having moved on from and absolutely nothing to get worked up over. Save your outrage and your money for something far more deserving.