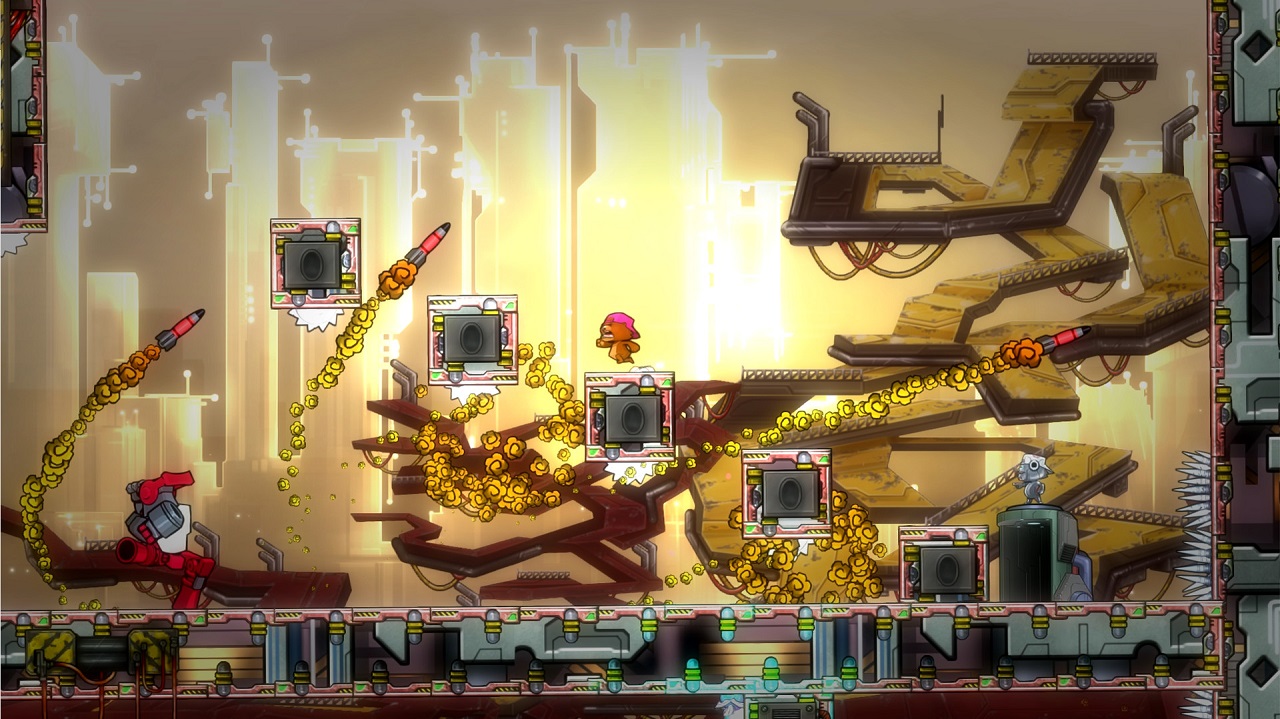 Playing through Super Rude Bear Resurrection is an emotional rollercoaster. I’ve felt elated, frustrated, stressed, and eager while completing the game. It’s been taxing and challenging as hell, but I just can’t get enough.

Let’s get something out of the way first: Super Rude Bear Resurrection is hard. When I previewed it earlier this year, I wrote that the game is basically “Meat Boy masochism turned up a notch.” After a dozen hours with Rude Bear‘s retail release, I’m confident in saying that it’s the most difficult game I’ve ever played. But thanks to a single mechanical conceit, it’s also one of the fairest. 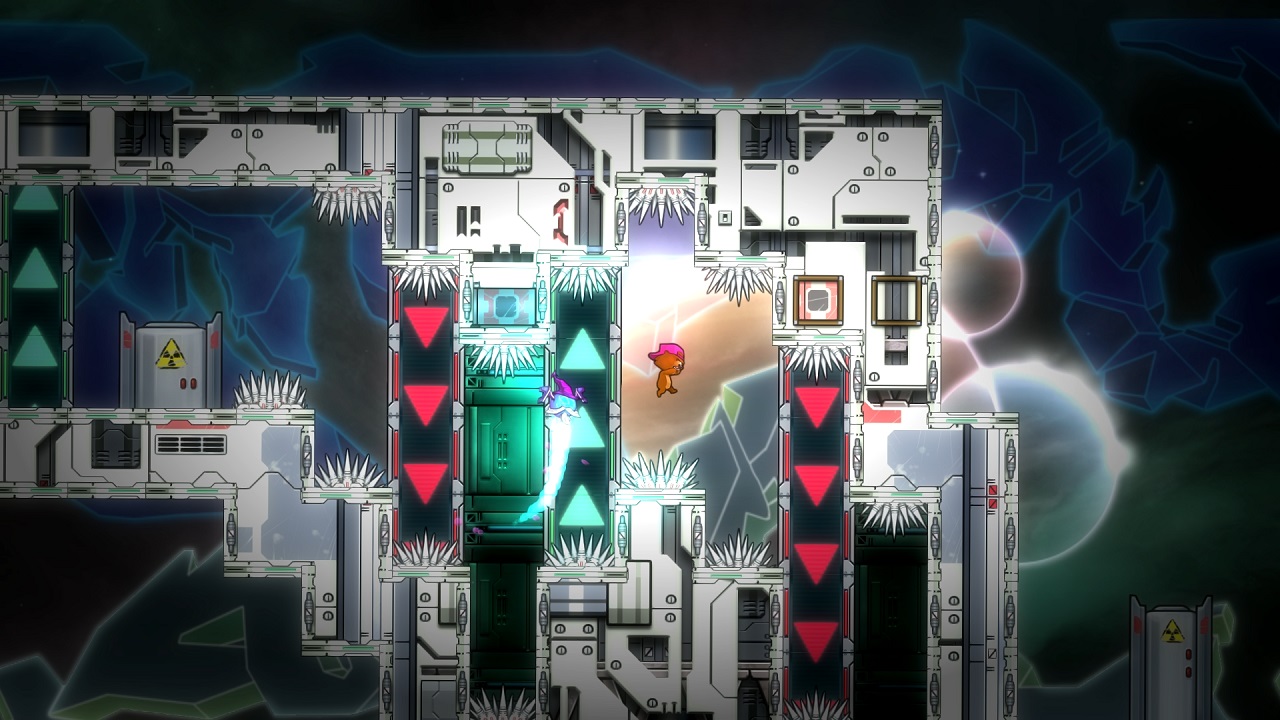 Super Rude Bear Resurrection‘s hook is that every single death has the potential to make the game easier. Whenever you die, be it from a mistimed jump or the ever-hungry teeth of a spinning buzzsaw, Rude Bear — a perpetually pissed and impressively determined bipedal brown bear — will respawn at the nearest checkpoint while his corpse is left behind, often negating many instant death traps.

To put it simply, death functions as a sliding difficulty scale. It’s possible to complete levels without dying, but it’s damn near improbable. Each level is fiendish, sure, but the simple fact that each death has the potential to make the game a bit easier means that no challenge is insurmountable.

Of course, an interesting and useful twist on death doesn’t do much if the game plays like hot garbage. Super Rude Bear Resurrection is tight and responsive. Even during the most harried of platforming segments, I never felt like I wasn’t in complete control. Rude Bear’s movements are deliberate; you can alter the height of his jumps with quick button taps and control move him around in the air with relative ease.

The marriage of responsive controls and lingering corpses allows for some wickedly smart game design. I can’t write about what it’s like to complete the game without dying a few hundred times, but I can say that learning to accept death and understanding how to use it to your advantage goes a long way. It’s rewarding to know that your past failures will inevitably lead to that single elusive success.

Super Rude Bear Resurrection‘s levels are a varied mix of platforms, pitfalls, and spiked surfaces. Completing even the simplest stage requires a mastery of well-timed leaps and risky wall jumps. Later levels incorporate moving surfaces, homing missiles, and gravity-altering fields. It might sound like a lot to take in, but one of the game’s greatest strengths is how it subtly introduces a new mechanic before iterating on the idea. You’ll encounter a single portal, for example, that warps you to a nearby location before you have to complete an entire level based on the concept. 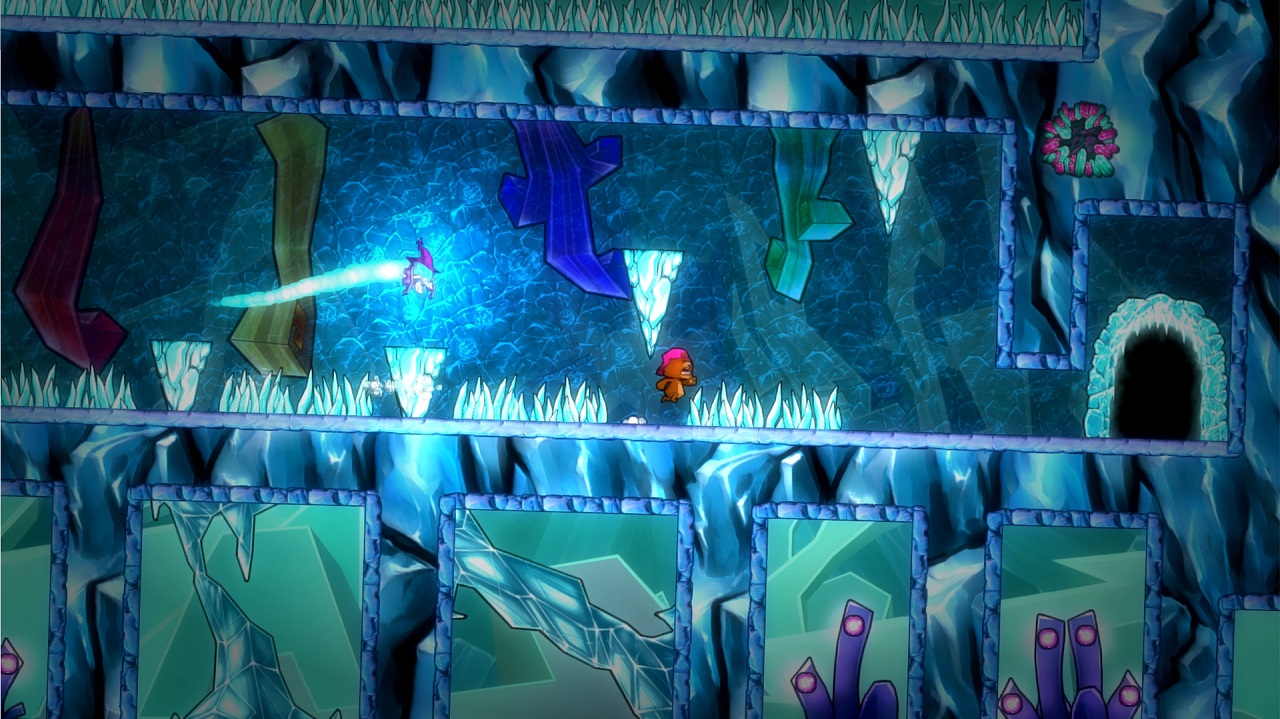 The subtle signposting of new mechanics, when coupled with Rude Bear‘s unique approach to death, makes for a game that’s tough to put down. Though I rarely knew what to expect from any given level, I never felt ill-equipped to face the unknown. Super Rude Bear Resurrection is a Rube Goldberg machine of winding levels, complete with a dizzying amount of things that will you kill you in an instant, but it’s rarely unforgiving.

And it’s that push and pull approach that makes the game so good. Super Rude Bear Resurrection is a polished platformer that looks great and sounds even better (seriously, the soundtrack bumps like whoa), but it’s also a masterclass in design. Across dozens of stages and hundreds of thousands of deaths, it always managed to surprise me. I don’t think I’ve ever encountered a platformer that rewards both precision and brute force — I’m not ashamed to admit I finished a stage or two by racking up a carcass pile so tall that it allowed me to cheese my way past tough spots — at the same time.

So while it might seem easy to write Super Rude Bear Resurrection off as a 2D platformer that solely wants to make players die a shitload of time, that’s hardly fair. Instead, it’s much better to look at it as a game that encourages creativity and persistence. There’s always a way forward or a secret exit down a hidden path. All you have to do is take a deep breath, keep trying, and maybe die more times than you care to admit.