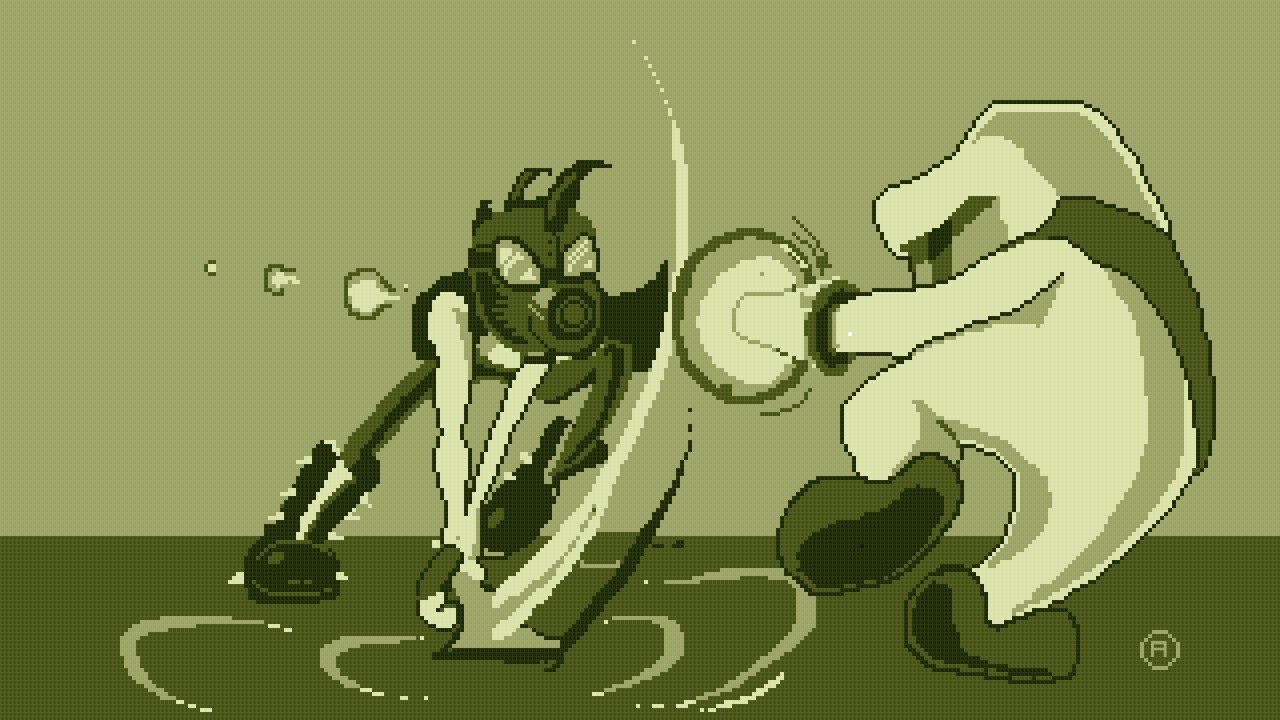 Tear down this wall!

Super Rad Raygun is a game I’ve been following for a little while. I first saw it as plain old Rad Raygun at SGC 2013. It was sporting a Game Boy aesthetic and had gameplay reminiscent of Mega Man. It was a fun little title that wasn’t too ambitious.

The following year, it adopted the Super moniker and had a massive upgrade. Now there were special moves, an energy meter, and some wild plotline about overthrowing communism. I was blown away and couldn’t wait to try the full version.

Maybe the long wait dulled my enthusiasm for the final product, but Super Rad Raygun is definitely a fun, goofy and surprisingly poignant game. 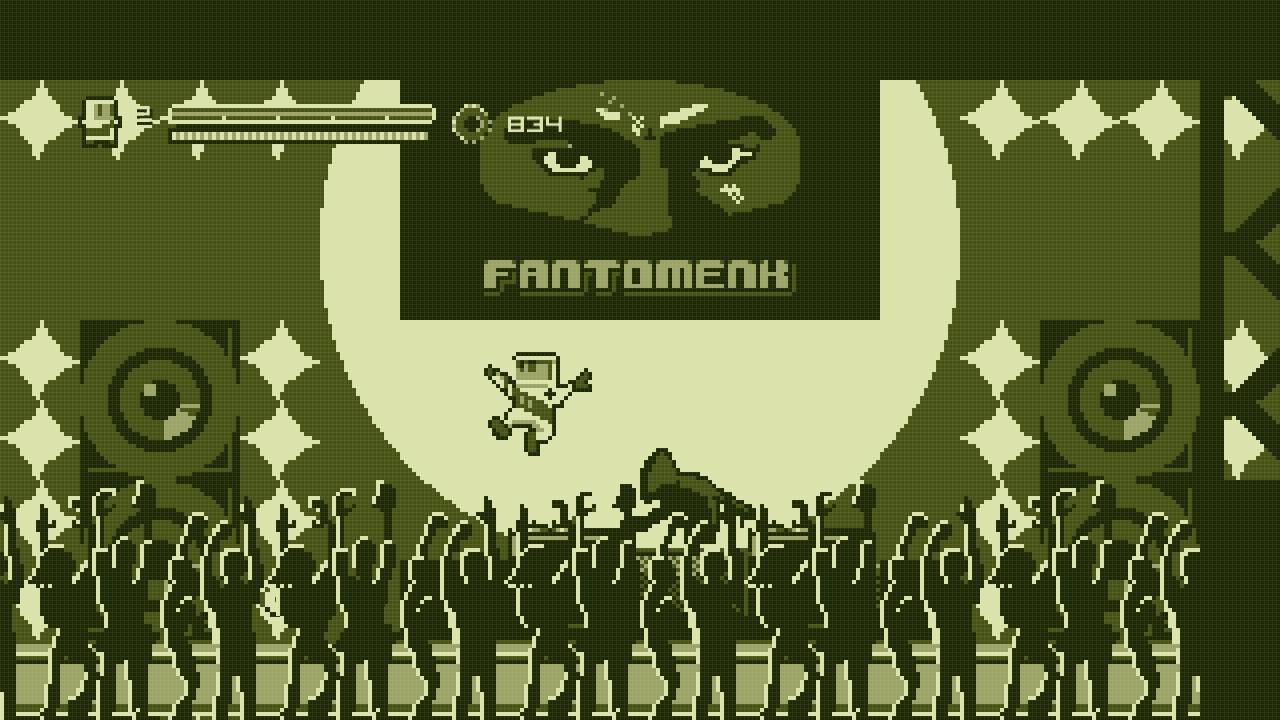 The plotline of Super Rad Raygun sees you playing as a Game Boy-looking robot named Rad. Set during the height of the Cold War, Rad is sent by the President of the United States to end communism in Russia. The very first level has you defending the White House from invading Russian robots and some weird spoof of Madonna.

From the outset, the humor comes shining out. Rad is a naïve little guy, so he ends up rationalizing his actions with weird logic. The President tells him this is all to conquer the USSR and Rad has some goofy catchphrase to go along with it (“Let’s smash some soviets!”).

Upon beating the first level, you are treated to a world map that allows you to tackle levels in whatever order you like. It isn’t the most open-ended system around, but it helps keep you from getting stuck on any difficult levels. The game has a fairly straightforward and simple leveling system that lets you upgrade Rad with new equipment.

Killing enemies will eventually drop bits, a form of currency that Rad can use to upgrade his skills. The skills you have allow you to power up your default blaster, increase your max HP, and unlock different moves like a ground slide. These are all governed by an energy meter, including doing a basic double jump.

Along with simply buying new levels for each of your stats comes a battery system. You can find batteries lying around in each level that let you power-up your abilities. These batteries can be swapped between your abilities on the fly, allowing you to temporarily remove a point from you agility and put it into your max HP or blaster.

It makes for a system that requires a bit of strategy. You have to remain stationary for your energy to recharge (which can eventually be upgraded to refilling almost immediately), so you can’t just spam charge-shots or your arc cannon and hope to win. Running out of energy will leave you temporarily vulnerable to massive damage with a lack of retaliation. 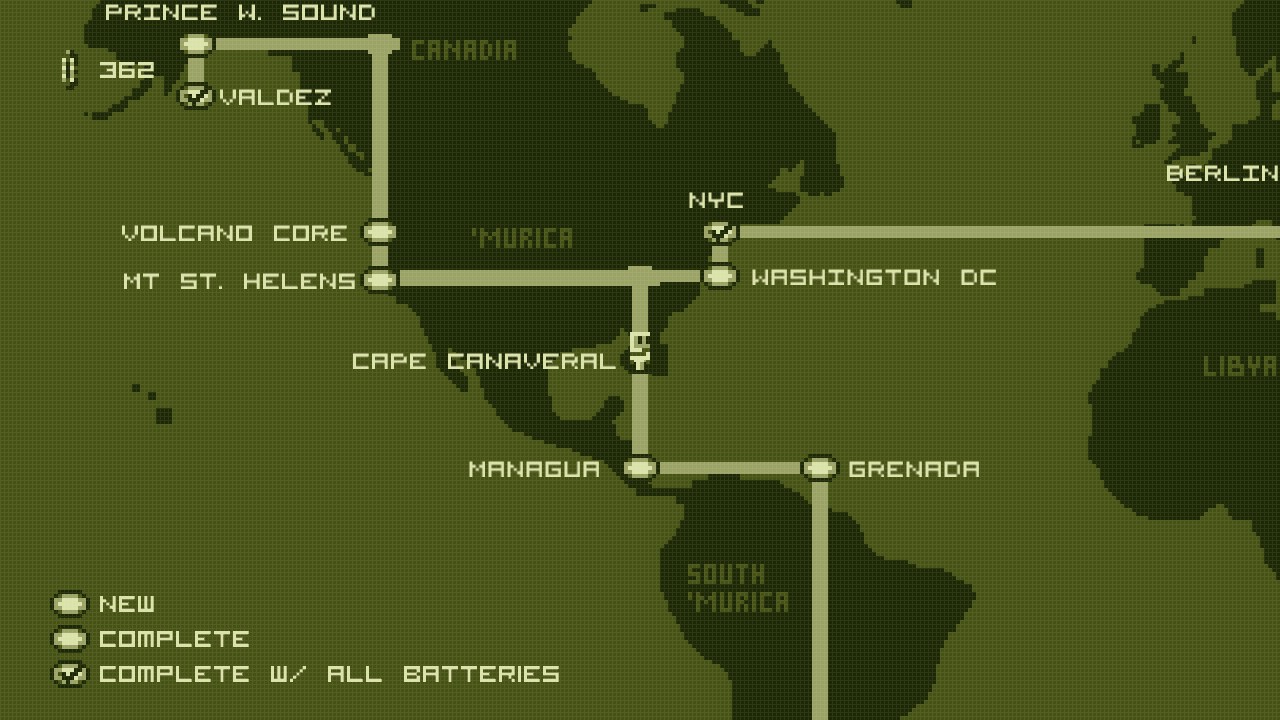 You can also decide on a per-level basis what upgrades you want to take with the battery system. Some areas are darkened, so you’ll need to invest in the backlight to see the entire area. Others are more focused on combat, so you might want to power-up your shield or take a stronger blaster.

That is truly the most nuanced thing about the game. Everything else feels exactly like any old-school classic platformer you may have played in your life. The levels typically scroll to the right and you often just jump and shoot. The platforming challenges are fun, don’t get me wrong, but Super Rad Raygun isn’t setting out to ignite the world with innovation.

There are also a tremendous amount of references to classic action games at various points. Some enemies look like Met from Mega Man and one of the boss fights is against the duo from Contra. They even fall over after each hit, as if losing a life. The enemy design isn’t entirely consistent (some of the artwork clashes with Rad), but it is filled with a reverence for the past that evokes a nostalgic feeling.

Along with that love of the past comes some frustrations. The controls can feel slightly laggy at times. Rad likes to slide around and that can lead to you missing jumps or walking straight into an enemy. None of the levels are unforgiving (they all have liberal usage of checkpoints), but it sucks to feel like your death came at the hands of sloppy controls. 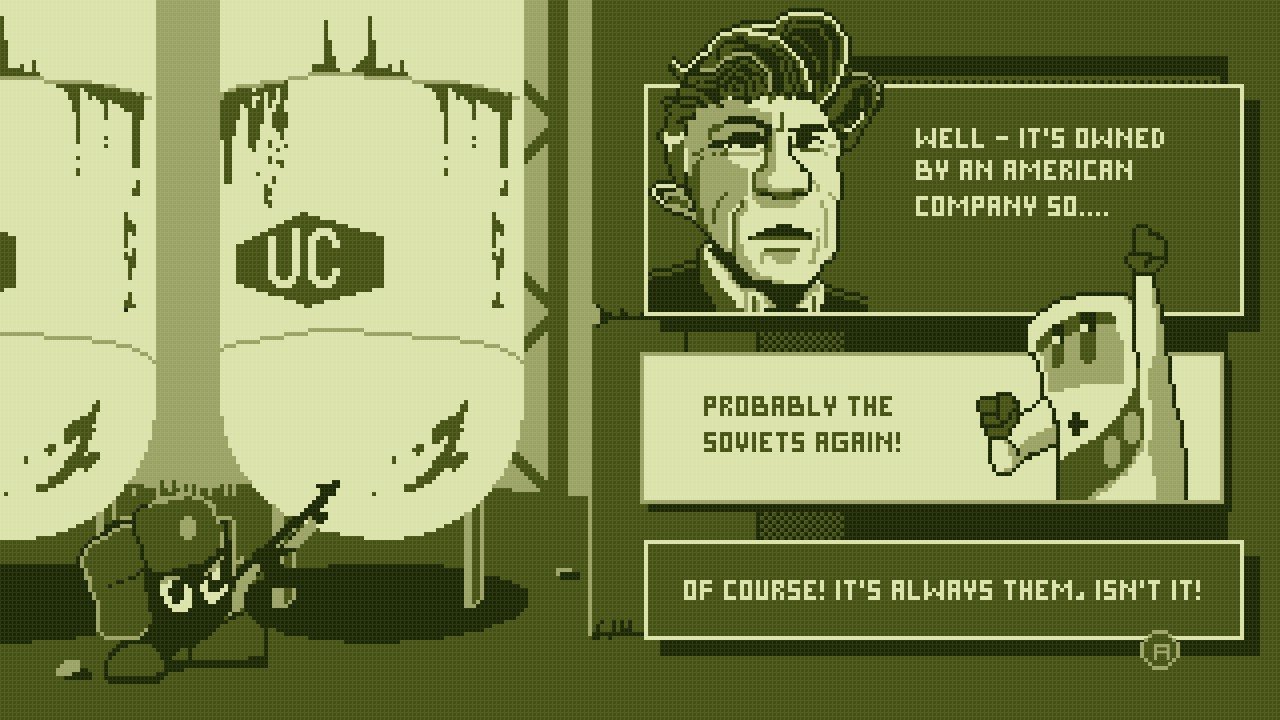 One of your abilities allows you to aim from a stationary position, but if you happen to be standing near a ladder, Rad often climbs up or down the ladder instead of aiming his gun. Maybe that was due to me pressing the buttons in the wrong order, but it reminds me of the original Castlevania and its issue with stairs. I can’t forget to mention the quirk with water, either. For some reason, Rad gets damaged by being in water, despite a few sections requiring you to swim. Your upgrades will mitigate damage, but having such a strange limitation is irritating.

The difficulty curve is uneven, as well. Like I said, nothing in the game is impossible to beat, but certain sections are ridiculously tougher than previous areas which then get followed by a segment that feels too easy. It leads to awkward pacing for some levels that makes them drag on. 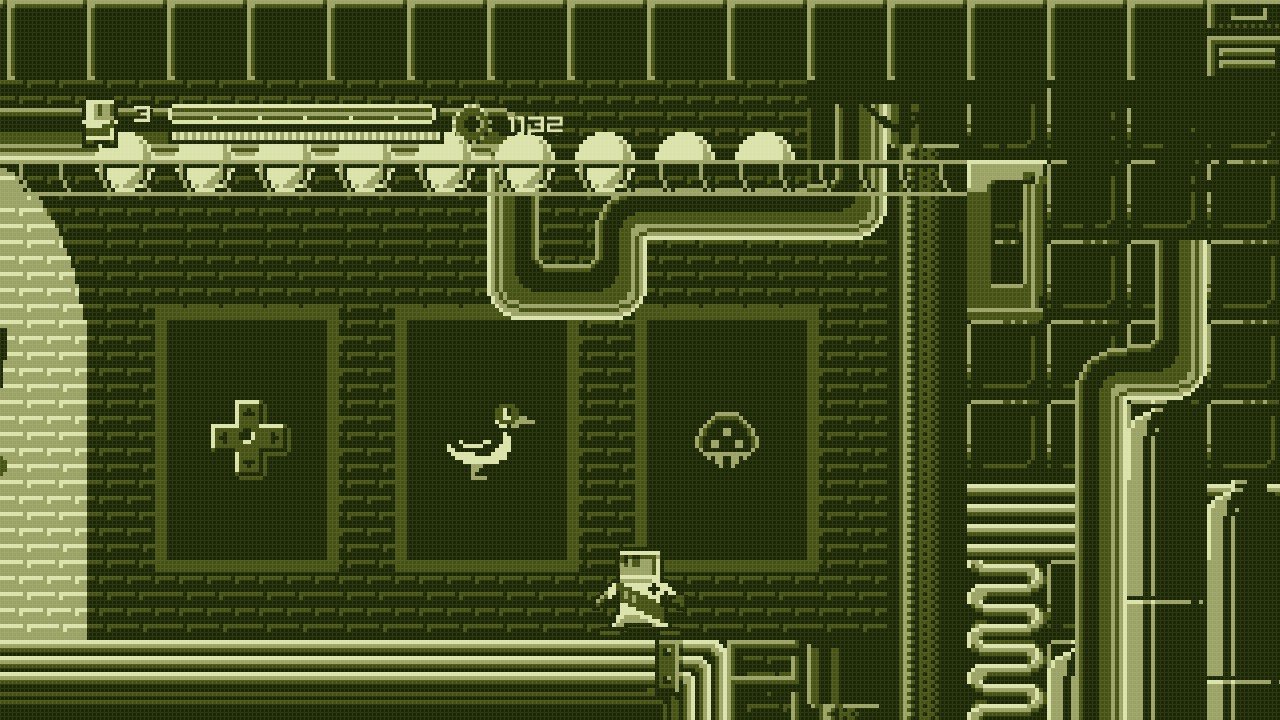 The game eventually becomes too easy, though. Your upgrades to the arc cannon make it unstoppable to the point where I no longer used my default blaster. Sure, Rad needed to cease moving to shoot, but taking out enemies in two hits was worth the risk. A lot of the bosses become cakewalks when you’re dealing out 30 damage in a single attack.

I could see a lot of people losing interest if the soundtrack wasn’t so good. Each level has a kickass tune by Fantomenk and BubblePipe Media. A lot of the standout tracks don’t happen until the later levels, as well, so the soundtrack remains an incredible high point for the entire duration.

The story also takes a wild turn that I didn’t expect. I had some initial feelings of confusion with how gung-ho Rad was, but he eventually grows a conscious and decides to follow his own course. Being a robot programmed without color, I guess he was only able to see two shades with every conflict, despite the world being shades of gray.

In the end, I forgave a lot of the initial problems. I wasn’t impressed at the start, but I grew to love the childlike wonder of Rad’s personality. The plotline almost plays out like a coming-of-age story and it makes the whole ordeal endearing. The action is based on a tried-and-true formula, so it is easy to adapt to, as well. 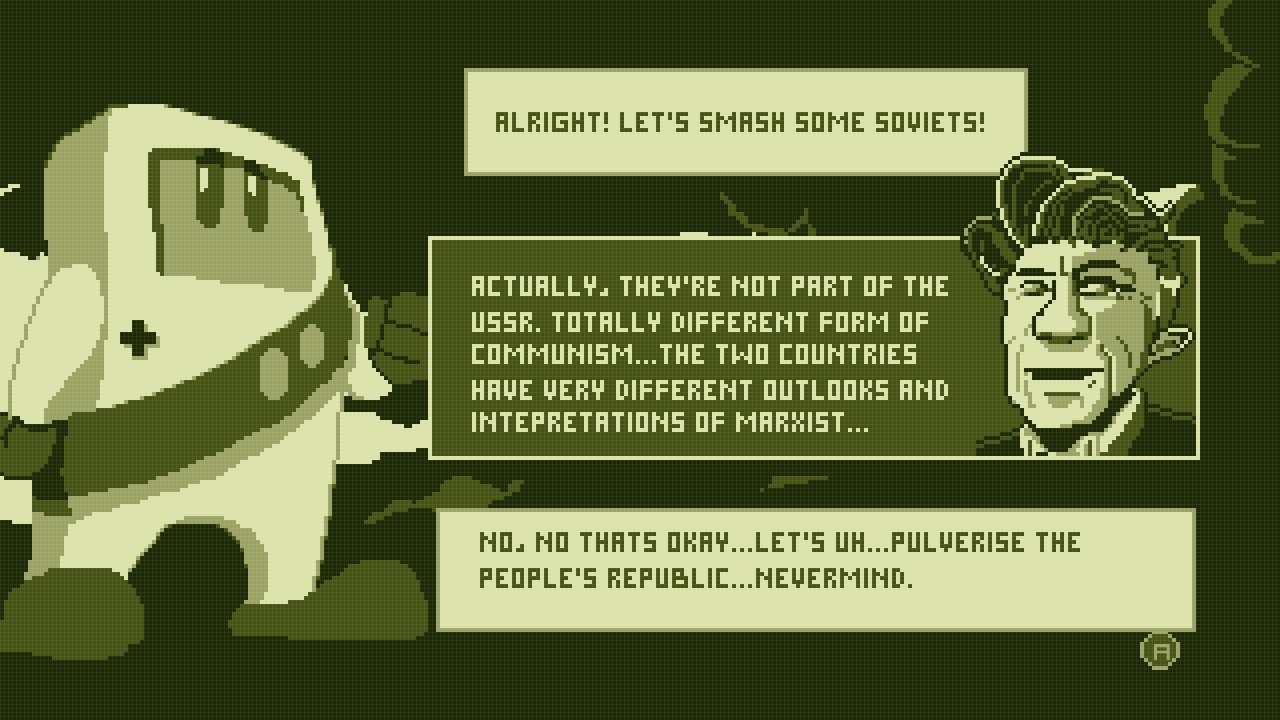 You might get ticked off at some of the boss fights and maybe the life system is an antique of a bygone era, but the game is fun and charming. The length is also pretty good, sitting at around five hours for a first playthrough. For $10, I’m not sure what more you could ask for.

Maybe a little bit of polish on the controls or some fine tuning with the difficulty curve, but Super Rad Raygun is definitely worth a playthrough. As a love letter to the Game Boy era and classic games, in general, you’d be hard pressed to find another game made with such passion and style.