As original as vanilla ice cream

Monkey Ball hasn’t done much to change up its tried-and-true formula in the past decade, and tends to play things fairly close to the chest. You’re a monkey, you’re in a ball, and you have to roll around to collect bananas. Full stop, you know what you’re getting here when it comes to most of the franchise.

After a number of ports, rehashes, and eventually a culmination of a $2.99 mobile game (that’s constantly on sale for $0.99), even as a fan, it’s easy to become disinterested.

So what did I find after playing the Vita’s first ever Monkey Ball game? Yep, this is pretty much the same thing you played all the way back in 2001. 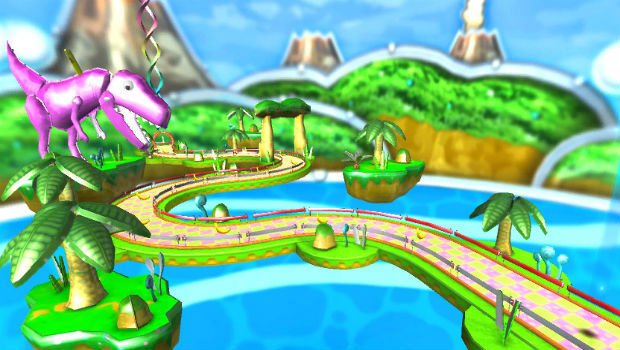 The “story” in the Monkey Ball franchise is basically meaningless, as the setup continues to be simple: you get to roll around in various courses in a manner similar to Marble Madness, grab collectibles, and make it to the end before running out of time.

Survival isn’t the core goal, however — it’s also a score-attack game, as you race for the highest point total possible in the shortest amount of time. Of course, you’re only going to get as much enjoyment out of beating your own scores as you put in.

The controls are mostly a non-issue. You can (thankfully) utilize the left analog stick to roll around in lieu of using gyroscopic controls. The camera takes some getting used to since it’s placed very close to the ground and can’t be changed, but rolling around is easy enough — literally the only button or directional device you’ll need to ever use is the left analog stick.

As you roll around the 100-ish levels in Banana Splitz, everything will feel pretty familiar. There will be twists, there will be turns, and you’ll most likely go flying over the edge a few times. But somehow, someway, it’s still mostly fun.

Over the course of the game, pretty much every level serves its purpose without feeling too difficult or too easy, and the game’s vibrant colors really pop on the Vita’s OLED. In essence, the single-player portion is an utterly inoffensive, if very safe portable version of Monkey Ball, with a solid amount of level diversity between maps. There’s not much else that can be said about it. 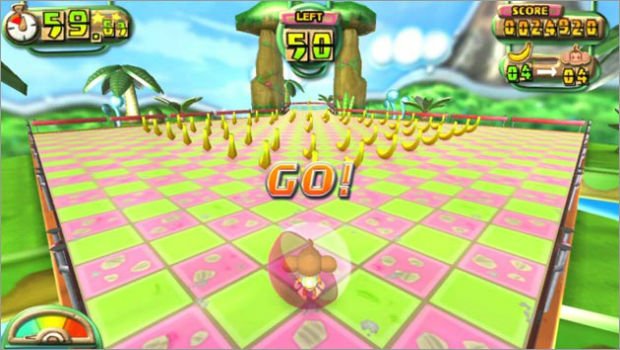 Okay, so part of Splitz is your run-of-the-mill Monkey Ball experience — so far so good, right? Well, while the Solo Play portion is mostly fine, everything else is fairly miserable.

Firstly, the menus are a huge drag — and there are a lot of them, which makes very little sense given the game’s simplicity. Since you can’t use button inputs on the menus, you have to drag to different options, and they’re hyper sensitive. I found myself groaning on more than one occasion — for god’s sake, developers, just let me use the d-pad on menus.

The minigame collection is also fairly disappointing, and can barely be called a distraction. Some games, like Monkey Rodeo, use a poor, forced implementation of the rear touch pad that’s painfully shoehorned in. Number Ball is basically a rehash of the number-tapping game already found in Welcome Park (which comes pre-loaded on every Vita).

If you’re looking for fun, you won’t find it here, as Banana Splitz continues on that same pattern for all of the scant eight included minigames. Outside of Love Maze, where you control two monkeys (one with each stick) with an overhead view, none of them are worth playing more than once. Love Maze is so good that it may be worth picking Splitz up from the depths of the bargain bin one day just to check it out.

While Monkey Target, Bowling, and Billiards can be played asynchronous manner with one Vita, they’re so woefully generic that odds are you won’t want to. With some ingenuity, multiplayer Love Maze could have easily been playable on one portable and added some credence to the minigame collection, but all we have in the end is a wasted opportunity. 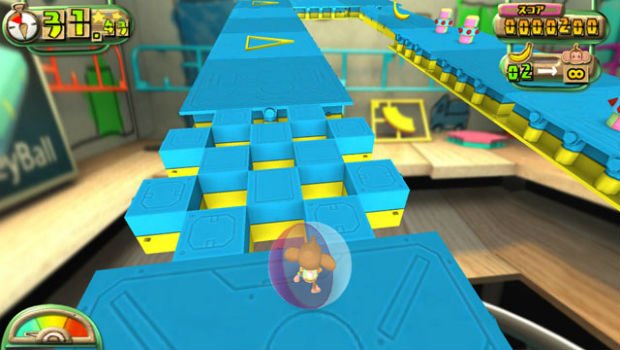 The final massive disappointment is the highly lauded Create-a-track mode, which makes use of the Vita’s camera to construct a track. Don’t get your hopes up here; it’s pure garbage. You’re supposed to be able to take a picture of something and create a new course, but it just plain does not work.

Very rarely will the created track actually resemble anything you took a picture of, and sadly, the game doesn’t allow you to customize the level (such as setting it to an easy, medium, or hard predisposition). Most of the time, the track will turn out to be a snooze-fest, which makes you even less likely to return and use it more than a few times.

Whoever designed this portion of the game needs to go back to the drawing board, as a fully fleshed out create-a-track mode could have some real potential on the go, as would a QR code system, such as the one in Nintendo’s Pushmo.

If you really love Monkey Ball, have no intention of playing anything outside of single-player, and come in with low expectations, you might enjoy Banana Splitz if it ever goes on sale one day. While it’s not offensively bad like Super Monkey Ball Adventure, you’ll most likely want to roll right on past this one.