The costumes are the best part

Ever since I was five years old, I’ve been drawing my own Mario levels on graph paper. It’s a pretty common story, because when I look at a series to give me a platforming baseline, it’s usually Mario. Nintendo didn’t just create a series with iconic characters, it mastered the art of level design.

This time though we’ll have the chance to transplant our on-paper ideas to the digital arena, with Super Mario Maker. Nintendo’s effort is admirable, but there’s a number of shortcomings that prevent it from reaching the height of the creation genre. 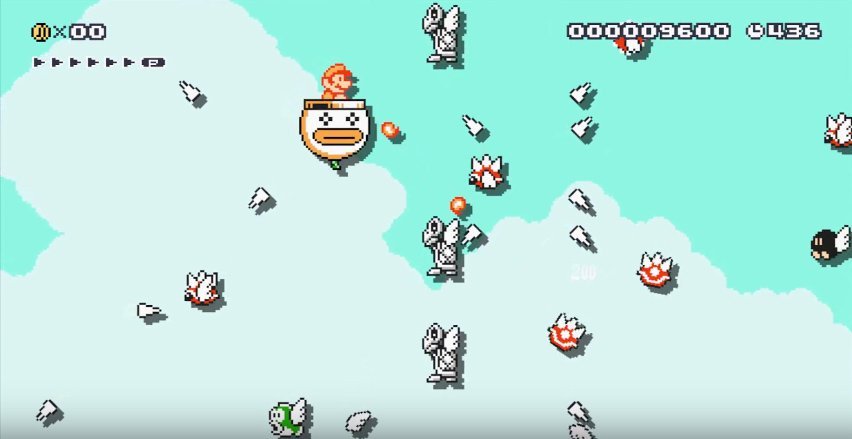 The core theme behind Super Mario Maker is simplicity. Opening up with a rather lovely tutorial section, you’ll be introduced to the creation process, which is as simple as touching an object with your stylus, and placing it in the on-screen grid. The entire experience can be played on the GamePad without the use of a TV, and never seeks to overwhelm the player. As the famous fictional Chef Gusteau once said, “anyone can cook!” and now anyone can create a Mario level.

While Super Mario Maker doesn’t give you everything your heart desires, you’ll find plenty of toys to screw around with, from enemies like Kuribo’s Shoe (which are actually Yoshi in select themes), to Giant Goombas that split into more Goombas, that can assist you in crafting objectives like P-Switch-centric puzzles, and even shoot ’em up levels with clouds or Koopa Clown Cars. You can create pipes or doors to send players into different areas of a level, tracks to craft moving platforms — every basic Mario concept you can think of is here.

The bread and butter of Maker is themes. You’ll start with the original 8-bit Mario theme as well as the New Super Mario Bros. U series, then eventually work your way up to Mario 3, and the always delightful World. Themes (which have their own unique physics and in a few cases, movesets) can be shifted at the press of a button, including the ability to jump into underground, ghost, water, airship, or castle settings in every sub-franchise. It’s awesome to create a level and see it switch to an entirely new gimmick within seconds. An “undo” option, eraser (which can be toggled with quick trigger presses), and a nuke-like reset button make everything easier.

Costumes, however, are probably my favorite extra in Mario Maker, which provide players with a way to morph into other characters like Sonic, Pac-Man, or Mega Man. They’re unlocked by way of amiibo, or another method I’ll get to shortly, and have some unique animations and sound effects in tow, like Pac-Man’s shift to an 8-bit sprite when he runs. Sadly, all of these costumes are limited to the 8-bit style only. The more you play it, the more you’ll realize that limitations are a recurring issue with Super Mario Maker, despite its immense charm.

Not all of these objects will be available immediately, either. Instead, you’ll have to wait nine days to obtain everything, including major themes like Mario 3 and World. I can confirm that players will be able to fast-forward the Wii U clock a day ahead at a time to “unlock” the next set of items. But the process is still painfully tedious, as you have to play five minutes to “allow” the unlock, then switch to the main menu, then back to the game to receive the items, then play for another five minutes, and so on. Since this method is available, the entire requirement is rendered pointless. Having said all that, it wasn’t really a dealbreaker in any way for me, and didn’t have any direct correlation to my assessment here.

However, there are a number of shortcomings inherent to Mario Maker‘s toolset even after unlocking everything. For starters, there are no assets related to Mario 2 outside of a select few re-skins. Not only is the entire theme missing from the game, but unique objects and enemies such as the iconic Phanto are nowhere to be found. Additionally, there is no way to eliminate the countdown timer (the max is 500 seconds), which takes the wind out of exploration-based creation’s sails considerably.

There’s also a severe limitation in terms of how you can build out levels. Right now you can’t choose to create a vertical-themed stage — you have to go with the same horizontal blueprint the game gives you without fail. Maker also limits the amount of enemies you can have in any given level (for instance, only three Bowsers or roughly 100 smaller enemies) even in the 8-bit theme, which is a silly design.

Mario Maker does have a few modes beyond the creation realm, thankfully, including a “10 Mario Challenge” mode that tasks you with completing eight levels in 10 lives. This essentially functions as the campaign, and brings players through a variety of different themes composed by Nintendo. The reward is two-fold — you’ll experience a fun pseudo-story mode, and obtain each blueprint for use later in the game’s creation mode. They’re relatively easy, but some of them provide mechanics very rarely seen in a core Mario game, and are worth spending several hours on alone. 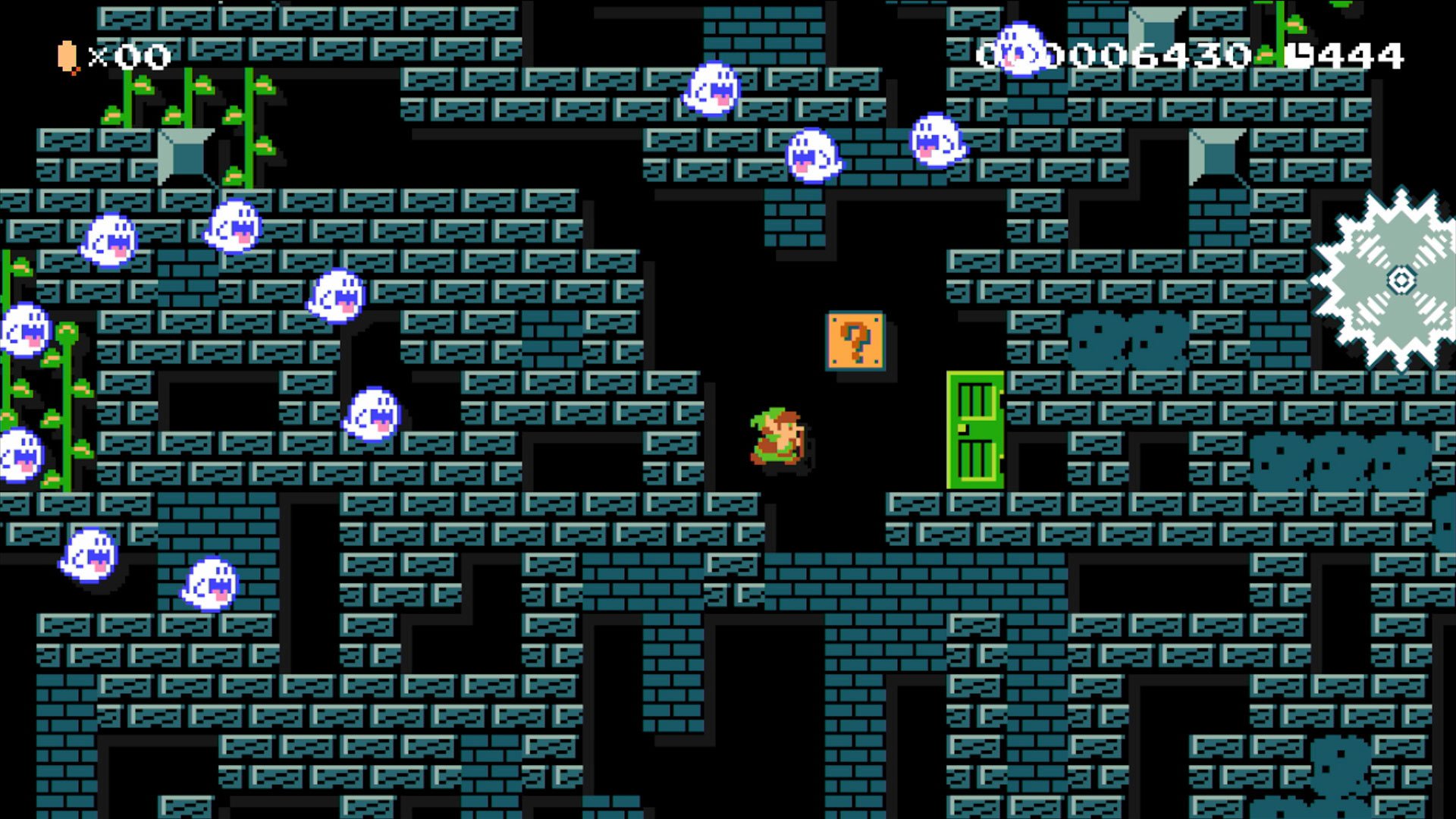 The online hub (titled “Course World”) is probably where players are going to spend most of their time in the coming months. Having played other creation games with online functionality for years, I have to say that this is one of the better modules. There’s support for everything, from bookmarking levels (with hearts), to viewing your “played” history, to queuing up your own creations, and sorting potential levels with qualifiers like popularity and newly shared.

It’s crazy to see what people have come up with already in the past few weeks, like re-creations of old school Mega Man levels complete with the 8-bit costume, to the classic “music videos” we’ve seen for years on end in games like LittleBigPlanet. My one gripe with viewing levels online is that they are automatically “spoiled” right before you start them. Basically, by looking at a stage, it will show the entire layout by default — there’s no way to “hide” this currently, and a lot of courses I played lost their luster as a result of this snafu.

As a bonus of sorts, the hub has its own version of the 10 Mario Challenge — a 100 lives version, which basically grabs levels online and mixes them into a custom world. This is probably my favorite element of the game, as it does a good job of curating content and giving it to you in a rapid-fire format. It also rewards players with costumes upon completion, so you don’t need to use amiibo to unlock them.

Super Mario Maker is a charming little creation tool, and I’m sure fans will come up with some amazing levels for years to come. However, it feels a bit more constrained than it needs to be, and is in dire need of updates or DLC to keep it going long term.