For me, when Nintendo released Super Mario 64, it showed me that 3D platforming was the future. But, because of the camera and other control issues that had yet to be polished, I wasn’t very excited for the future of 3D platforming from Nintendo. Mario’s outing on the GameCube didn’t do much to win me over, either. It wasn’t until the release of Super Mario Galaxy on the Wii that I felt like Nintendo had come close to successfully fitting Mario into a 3D platforming formula.

The combination of Super Mario Galaxy‘s polished controls and innovative power-ups managed to bring back some of the excitement I hadn’t felt for the franchise since the Super Mario World games from the 1990s. And now with the release of Super Mario Galaxy 2, with the struggle to perfect 3D platforming controls finally behind them, it feels like they were able to focus on being creative. This focus on new power-ups, level design, and imaginative control, combined with some fun throwbacks for Mario series fans, makes for one hell of a ride and an even better game than Super Mario Galaxy. For me, I think it’s an even better game than my previous series favorite, Super Mario World.

Or, in short: Best Mario Game Ever.

The story? You know the story by now, and the developers know that you know. Because of this, they don’t waste any energy on telling you that the Princess is missing. Again. Once again, Luma and the lumas are helping out in your quest to retrieve Peach, but this time you’ll cruise space and galaxies in your new ship, which happens to look like Mario’s face. The creator of the ship, a luma named Lubba, jokingly calls it a “faceship.” The Stars are back; you’ll collect them to give your faceship the ability to navigate space. Between this faceship and some map tweaks, getting around is much easier in Galaxy 2. The hub is gone now. Instead of the almost aimless (and sometimes frustrating) exploration of Super Mario Galaxy, Galaxy 2 is mostly linear, having you move from one world to the next, collecting enough stars and star bits to meet requirements to clear checkpoints and open gates. This gives the game a feeling of constantly moving onto something bigger and more exciting, reminding me of the series’ 2D days.

Actually, the level-to-level progression of Super Mario Galaxy 2 turns out to be even bigger and more exciting than it was in the old days. The absolute best aspect of the game is that it feels like Nintendo’s magicians had a field day making it. There is always something to wow you around every corner. Just when you’ve come off the high of one level’s innovations, or one power-up’s new possibilities, the game throws another at you. What’s amazing is that Super Mario Galaxy 2 doesn’t stop wowing you with wild creativity until it’s over. 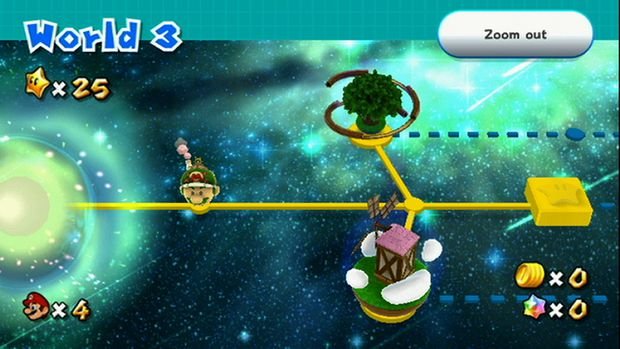 A lot of the creativity went into the game’s level design. Instead of splashing a new coat of paint on Super Mario Galaxy‘s already solid levels, Nintendo went nuts with new creations. Running around a sphere was fun, and there’s still some of that, but levels open up quite a bit more, and they can now seamlessly shift into 2D, back into 3D and even play with gravity. There are several amazing examples of interplay between orientation and gravity physics that have to be experienced.

As promised, there are obvious throwbacks to past Mario series games. We came across loads of nods towards games like Super Mario Sunshine and Super Mario World, and even level-specific nods to others, like Super Mario Bros. 2. One of my new favorite level types revolved around a revised version of the original Super Mario Bros. “Underworld Theme.” The music plays and the Wii Remote’s speaker clicks along at the same tempo, giving you a sort of hand-held metronome. The idea here is platforms disappear and appear in a rotation, set to every four beats of the music. You have to count off to make sure you’re jumping at a perfect time, or else you’ll fall through the floor. Another notable stage had me seeking out a world’s boss in a castle that was reminiscent of the original Super Mario Bros. castles. The difference here is that Mario had to navigate floors, walls, and ceilings, all in a 2D/3D blend that had me marveling at what I was doing, even as I was doing it, almost in disbelief. The vast and insanely creative level design of Super Mario Galaxy 2 should serve as a showcase not only for 3D platforming levels, but also for what happens when game developers focus on being original instead of rehashing other games’ ideas.

While the levels themselves are the best part, the new powers given to Mario also go a long way towards keeping things exciting. Everything from Boo Mario to the Bee Suit was a thrill in the new levels created for them, but the new suits and abilities really shine. Rock Mario becomes an invincible rolling boulder with the flick of the wrist, rolling through enemies and barriers with ease. He can roll continuously until he hits a wall or large obstacle, and Nintendo went crazy with levels designed around these aspects. An equally destructive drill power-up has Mario blasting through the dirt under his feet, coming out on the other side of the planet. The drill used in conjunction with some of the world flipping puzzles can twist the mind. My favorite is Cloud Mario: with his fluffy hat and pants on, Cloud Mario can generate up to three clouds anywhere he pleases. The platforming benefits are obvious, but one particular boss battle makes fantastic use of the power-up. This brilliant and also very challenging battle has you bouncing from cloud to cloud, scrambling to find another Cloud Mario power-up to make sure you never touch the ground. 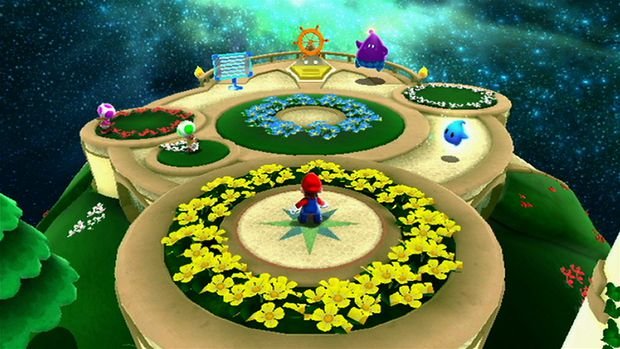 If this is Mario’s face as a ship, he’s now standing on his…bald spot?

While Yoshi is technically a character, he feels like a power-up with his fast feet and sticky tongue. No longer is Yoshi just a ride around the level, though. Now he’s a level necessity, and also a vehicle (pun intended) for even more creative level design in Galaxy 2. Early Yoshi-required levels turn out to be the most fun of the bunch, but they’re really just letting you test the waters with the dinosaur. The later ones are the most challenging, especially when combined with Yoshi’s power-ups. One speed platforming level has Yoshi eating fire plants, which have him running so fast that he can scale walls. While wall-scaling may sound like a great advantage, know that Yoshi becomes harder to steer, making for levels that require precise control and timing to complete. One of Yoshi’s coolest new powers has him eating a bulb that sheds a special light to reveal hidden platforms. Again, while this sounds like a great advantage, know that the bulb’s powers are timed, and that if you’re not on solid ground before they run out, both Mario and Yoshi will be falling through space again.

Speaking of helpers, you can now control Luigi in certain levels as a option, with no star requirement. He’ll show up asking to help out, letting you opt to control him instead of Mario for the stage. What’s a shame is that he doesn’t seem like much help, as he lacks Mario’s ability to stop instantly. Instead, he’ll slide — often off a platform. And on that thanks-but-no-thanks note, a second player can help out by using a second Wii Remote to blast star bits and pick up items for the first player. As you can imagine, it’s not much help at all. When we tried this co-op mode, I was distracted with the feeling that the second player was only wasting my star bits. 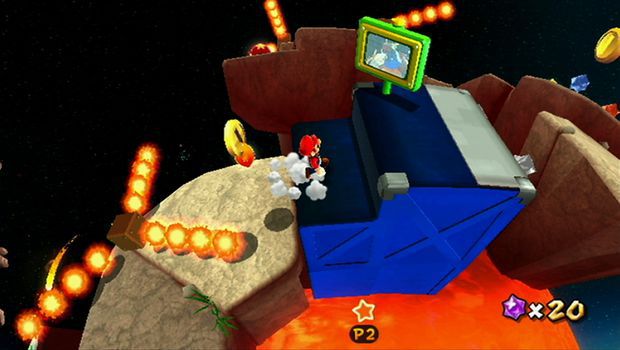 This little TV helps by suggesting moves and techniques. You won’t need it, though.

If some of our level and power-up descriptions haven’t clued you in, we’ll say it in a more direct fashion for you: Super Mario Galaxy 2 is quite a bit more difficult than its predecessor. In the later worlds, the game almost seems unapologetic. There were many times that I pictured Nintendo’s developers laughing as I fell through space again and again. Miyamoto did say that they bumped the challenge up a bit, and he was not kidding in the slightest. Relying on that tight platforming control, Super Mario Galaxy 2 puts you through the grinder in levels that require super-precise jumps, impeccable timing, and boundless patience. I can’t tell you how many times I caught myself screaming at the television. My trials and reactions even became a form of entertainment; Destructoid’s Editor-in-Chief thought they were entertaining enough to even making audio recordings of! The upside of the increased difficulty is the increased payoff upon completion. Not since 2005’s Shadow of the Colossus have I felt such a sense of reward from game challenges.

It seems like only Nintendo has the power to put so much polish on a Wii game that you forget it’s a Wii game. Super Mario Galaxy 2 looks fantastic in 480p, with colors and effects that shine and sparkle, and levels and characters so visually interesting that you won’t find yourself missing HD. This polish continues into the audio side, with an orchestrated score that easily tops its predecessor, and will likely remain a platforming game score high-water mark for a long time. (Or at least until Nintendo makes the next.) Soaring themes that accompany flying segments never fail to pull at the heartstrings. Other new pieces spice up new levels and add to the sense of exploration and adventure. In my mind, Nintendo has never released a game score greater than Galaxy 2‘s, and it’s hard to imagine them topping this one. 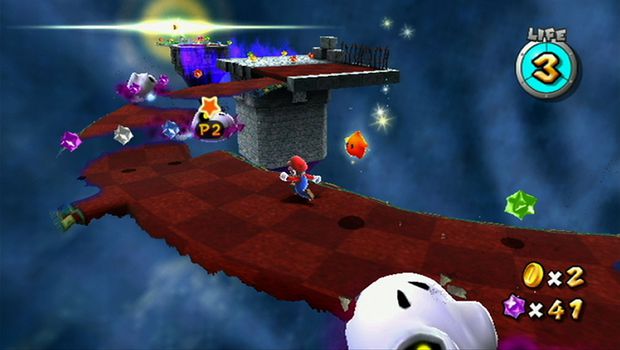 If you’re looking for the negative section in this review, you’re not going to find it; I have nothing bad to say. Going in, I expected to call Nintendo out for treading water, revisiting Super Mario Galaxy in this sequel. They didn’t, though. Instead, they poured in the same creativity and imagination that made me fall in love with games like Super Mario Bros. 3 and Super Mario World. To me, it feels like they finally felt the freedom and comfort in 3D platforming to get back to that Nintendo magic that we all remember. The end result is a galaxy of surprise after surprise, all coming together in a game that tops even my past favorites, making this the best Mario game Nintendo has released. Everything you’ve ever loved and more about the Mario series is here, and you’ll be missing out on something truly special by passing on this game.