The sea calls to me

Adrift at sea in a massive underground cavern. No natural lighting to speak of. Your ship’s hull has taken a beating from enemy cannon fire and giant crustaceans. Fuel and supplies are running low, but you might be able to survive the journey back home if you’re willing to make some sacrifices. Your crew is growing scared and restless. You think you hear something moving under the water…

Sunless Sea is a game of choices. Will you risk smuggling illegal cargo to faraway ports if it means extra money for supplies? Will you offer sacrifices to the gods of the sea, or remain firm in your belief that your frightened, pious crew are just being superstitious? Will you resort to feeding on rats if you can’t find anything else to eat? If it comes down to it, would you even be willing to eat your own crew if it meant you could survive another day? These are all questions you will eventually have to ask yourself if you ever hope to be victorious in the cold, dark waters of the Unterzee. 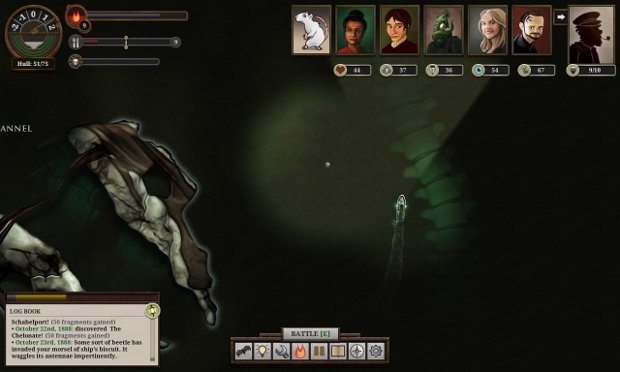 Let’s get something out of the way real quick: this game is sloooow. Much like a voyage across the sea in real life, sailing across the Unterzee will take a long time. The entire map is fairly large, and your ship moves at such slow speeds that it makes the world feel even bigger than it actually is. This isn’t necessarily a bad thing, but I know it will surely turn some people off, so be warned. Patience is a requirement.

If you think you’ve got the patience for arduous oversea voyages, then you’re in for quite a rewarding adventure. Sunless Sea takes place in Fallen London, a bizarre, Victorian-era version of London that has been buried far below the Earth’s surface in a huge underground cavern, with a vast ocean known as the Unterzee stretching as far as the eye can see. You’ll meet a colorful cast of characters, consisting of freaks, criminals, and anthropomorphic animals (perhaps they’ve been mutated?). Some will want to help you or even join you on your journey. Others will want to kill you. Maybe someone will even fall in love with you.

As captain of a sailing vessel, you’ll be traveling from port to port, exploring and learning about the islands of the Unterzee, while trying to achieve your ambitions. You have to make sure your crew stays fed and sane, your hull remains intact, and your fuel reserves are sufficient. Any oversight could quickly spell death for you and your crew.

When you begin a new adventure, you’re able to customize your captain. You get to pick a silhouette and decide how you want people to address you (Captain, Sir, Madam, etc.). You also have to choose your past. What you did in the past before you became captain will grant you a bonus to specific abilities, such as greater firepower as a veteran or increased knowledge as a poet, but you can also choose to remain shrouded in mystery.

Your ambition will determine how you win. If you desire fulfillment, you’ll need to acquire enough items to write a book describing all of your accomplishments, stories, and adventures. If you desire wealth, you’ll need to amass a great enough fortune to purchase a mansion and retire. Or perhaps you only desire to discover the whereabouts of your lost father, and return his bones to London for a proper burial. It’s up to you how the game ends. 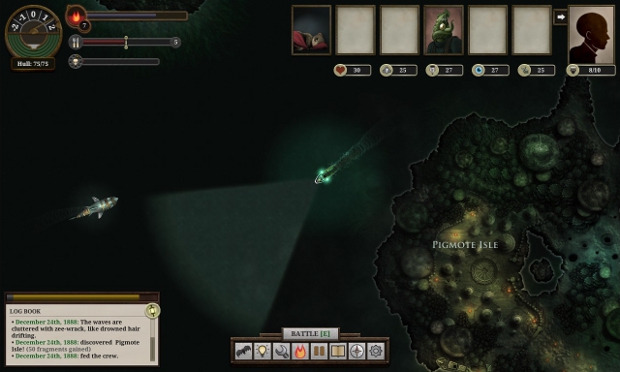 Achieving your ambitions will be difficult. Your first attempt will most likely end in death. Maybe even your second and third attempts will be failures as well. But each death gives you the opportunity to pass something on to your heir, who will become your next captain. You can pass down money, weapons, crew, or maps to help your successor in your next adventure. If you were exceptionally skilled during a particular playthrough, you can even write a will or earn some other bonuses which can be passed down in case you die. And you will probably die, a lot.

Sunless Sea‘s inspirations really shine through, especially with influences like FTL and Sid Meier’s Pirates. There are lots of randomly occurring events, a la FTL. While sailing, you might discover a bad omen, such as a white bat perched upon your ship. Or perhaps your conversation with an island local doesn’t go so well, and you end up in a knife fight. Or maybe your crew will lose their trust in you and attempt a mutiny. Your fate is often up to chance, so you’ll have to stay on your toes and try to make the wisest decisions when conflicts or opportunities arise. 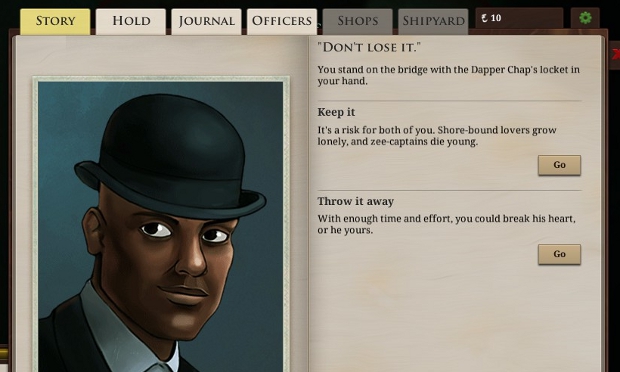 However, there are plenty of scripted events which happen during every playthrough as well. There will always be a tomb-colonist seeking passage on your ship, as well as a shady man in London’s port who requires your assistance moving goods across the sea. Eventually, you’ll familiarize yourself with these things, and the beginnings of your playthroughs will become second nature.

Speaking of events, the writing in Sunless Sea is top-notch. It’s definitely one of the game’s highest qualities. There will be a lot of reading, but the stories and dialogue are thoroughly engaging, offering plenty of excitement, scenes of horror, unexpected outcomes, heartwarming moments, and more. Every island has a story to tell, and each trip back to any particular port might reveal new information.

There are also occurrences that can alter the world around you. While I was playing, a house that I visited frequently suddenly caught fire and burned to the ground, meaning I could no longer depend on the residents for comfort and supplies. You’ll also find that islands will occasionally shift around upon starting a new adventure, so you may end up getting lost at sea looking for a place that you swore was there a moment ago. The world of Fallen London is ever changing, so you will need to adapt accordingly if you wish to keep up. 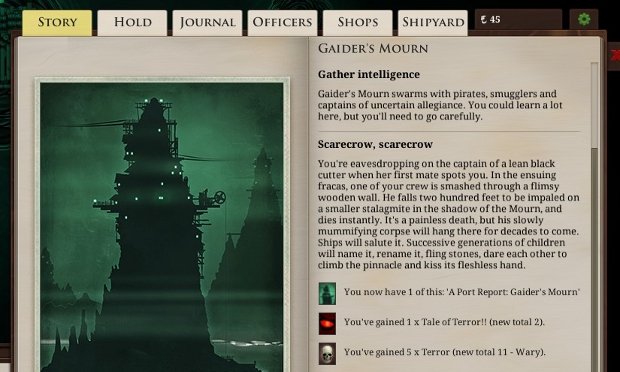 Then there’s the combat to consider as you’re preparing to set sail. The seas are swimming with giant crabs, jellyfish, sharks, and other creatures, plus enemy pirate ships armed with cannons of their own. Different enemies require different strategies, but staying behind your foe and keeping them within range of your light is usually a good idea. Defeating enemies can yield useful rewards, but oftentimes, the best strategy is just to flee. Especially when an enemy has way more health than you and can kill a crew member with each attack. Then you’ll probably want to evade detection and escape until you have a better-equipped ship to handle the assault.

You can upgrade your ship with new weapons, engines, lamps, and more, but make sure to pay attention to which part of the ship a particular piece of equipment belongs to. Not every ship has a space for aft or forward items, rendering certain weapons and equipment useless unless you purchase a new ship. I learned this the hard way, several times. I kind of wish they made this information a little more noticeable, to be honest.

Nearly every action you can do has its own risks and rewards. You might choose to turn off your lamps to avoid enemy detection or save fuel, but the darkness will also quickly increase your crew’s terror levels. If you set the engines to full power to narrowly escape an attacking enemy, you run the risk of causing a fire aboard your ship. Every decision requires contemplation. Reckless behavior can end your adventure quicker than anything else. 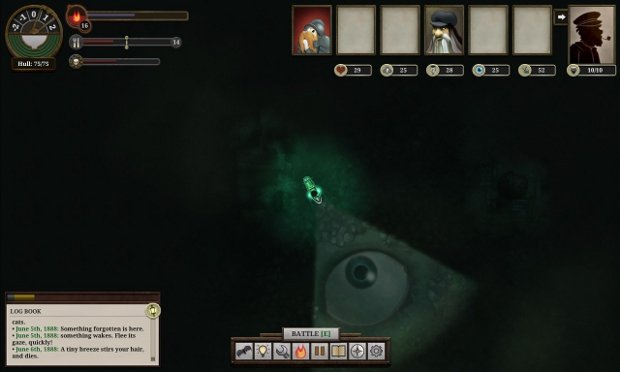 There’s plenty more to this game, but much of it is better learned through exploration or trial and error. Once you grasp the basics, your trips overseas will become more manageable, and your goals will become clearer. You’ll learn how to avoid danger, where to make the quickest profits, and you’ll begin to play more and more efficiently. It takes time, but it’s worth it.

As I’ve mentioned previously, be sure to keep in mind that Sunless Sea is very slow and often unforgiving. Of course, these aren’t necessarily negative qualities, but it does make it difficult to recommend this game for everyone. If you expect fast-paced action, despise multitasking, or can’t handle defeat, then this game probably isn’t for you. However, if you are patient, enjoy strategy and planning, and are ready to spend hours upon hours sailing the cold, dark oceans, then you will most likely find Sunless Sea to be a very compelling and satisfying adventure.

There are still many mysteries of the Unterzee that I have yet to discover, and maybe I never will see everything there is to see. But that just makes Sunless Sea even more exciting for me. The realm of possibilities seems endless, and every time I set sail I find something new. The sea is calling to me. Perhaps it’s calling to you, too.