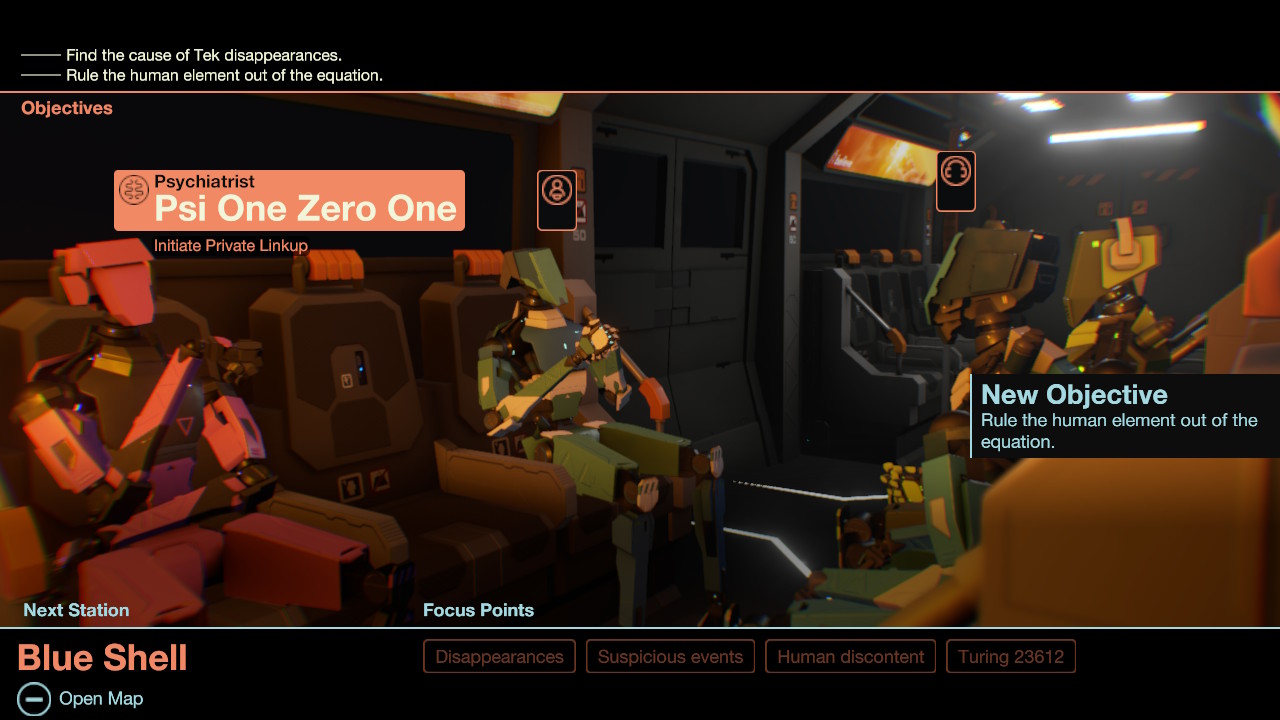 Do Androids dream of jumping turnstiles?

Visual novel games can be quite tricky to recommend to a lot of people. You’ll have a certain crowd that prefers their games have more traditional gameplay elements while other people are more sucked in by unique experiences over general polish. For the most part, I’m not big on strictly reading-based affairs, but I enjoy visual novels that try to engage me in some way.

When I first looked at Subsurface Circular, I wasn’t quite sure how this would play out. The game has a cold open and jettisons you directly into a detective story without much backstory to prime you for anything. The very first scene also made me think this was only going to be a reading-based affair, but I was pleasantly surprised at what transpired. 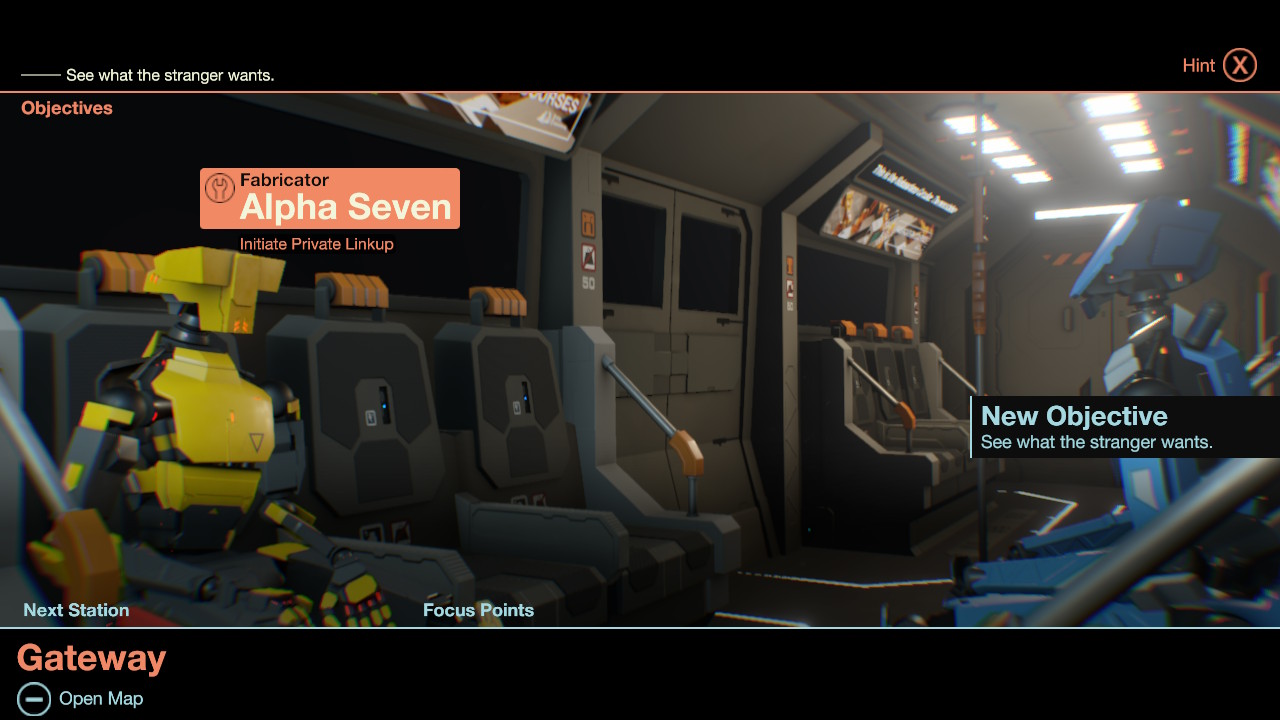 Subsurface Circular takes place entirely in one location, like a classic “bottle episode” of a sitcom. You play as a Tek, an android-like being, that has been assigned the role of detective and has been geo-locked to a subway train on the titular Subsurface Circular. This infrastructure allows other Teks to go to and from jobs that “management” has assigned them. Basically, you’re playing as a robot slave in the world of humans.

From your first conversation, you learn that some Teks have gone missing and that management might be trying to cover the whole thing up. Since your programmed directive isn’t to look into these disappearances, you decide to break code and help out a fellow Tek in need. This kicks off a plot that has some surprising revelations and some neat twists on traditional puzzle solving.

Since Subsurface is derived from visual novels, most of what you’ll be doing is asking other NPCs questions and learning a bit about their histories. This is all handled through a very simple interface that allows you to move at your own pace. You’ll then ask questions relating to your newly-acquired case before Teks are shifted on and off the subway and out of your life. Not everyone is willing to divulge all this information without getting something first, which is where all the puzzle solving comes in.

To talk too much about how you’ll come to these solutions would spoil a lot of the charm, but I’ll just say that Subsurface Circular definitely makes you feel like a real detective. You’ll need to pick up on clues within other Teks’ speech boxes and link those to information you already have present. One Tek might need the location to a certain area above ground, for instance, and another Tek knows just where that has been.

You might be wondering why that other Tek couldn’t just turn to the person sitting next to them and chat away, but all of these conversations are happening from a chat interface. The story explanation is that humans removed certain features from Teks to make them less scary and more subservient to the human cause, so no Tek has a face or mouth or makes any audible noise. This is one of the many subjects that the game tackles with its narrative.

I got a lot of Blade Runner-like vibes from the topics that were discussed in this game. You’ll encounter questions about job automation, human authority, and basic needs, but no lectures about which is the correct answer to these problems. This helps keep the game from feeling preachy about its subject matter, which works in getting you to make choices that side with your own personal beliefs. 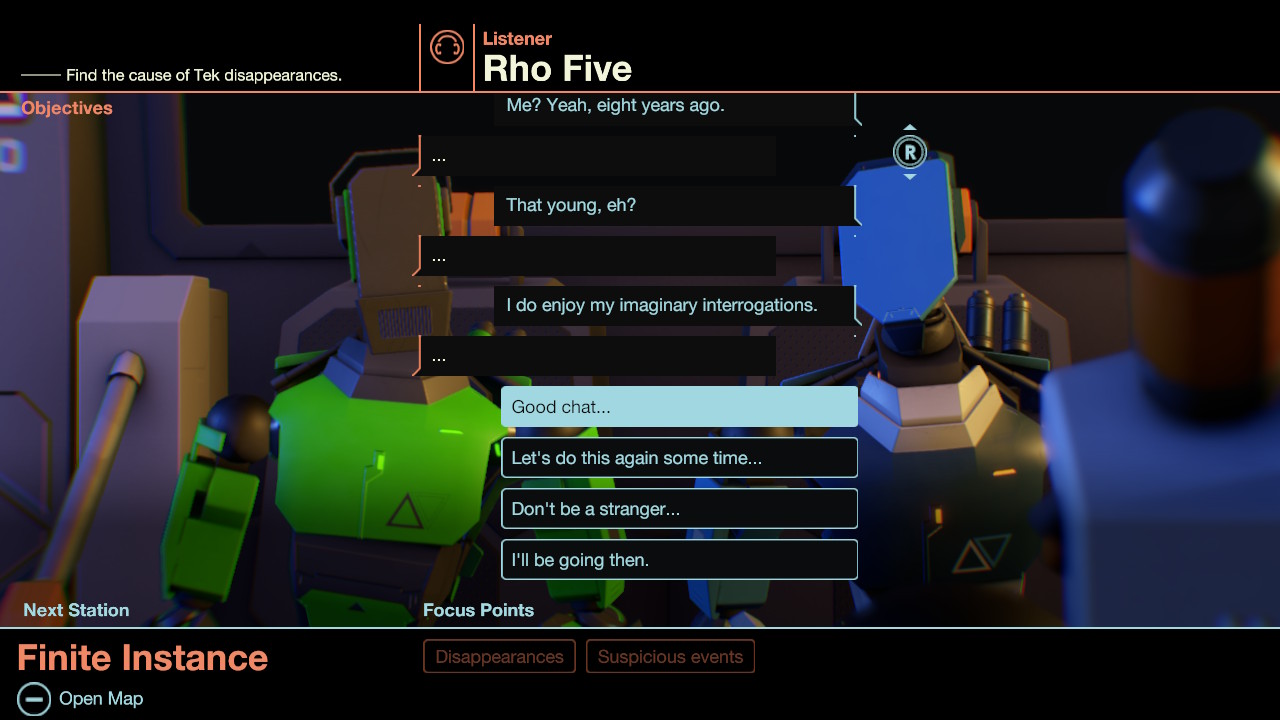 That isn’t to say there are dynamic branching paths or anything, because most of Subsurface is pretty linear. The game is telling a specific story and doesn’t mess around with extraneous content, but there are a few side objectives thrown in for the more observant players. I especially liked having the ability to help one NPC, for instance, despite there being nothing to gain from it.

Developer Mike Bithell made Subsurface Circular as the first title in what he is calling his “Bithell Shorts” series. These are games that are meant to be played in a single sitting and that is definitely possible with Subsurface. I sat down to play it in between some errands and I was able to finish it in around 90 minutes. As a matter of fact, I didn’t stop during my playthrough, opting to just sit down and finish it because of how engaged I got.

I won’t state that the plot is wholly unique and filled with brand new ideas, but the writing is clever enough and packed with some great characters that make exploring their dialogue trees a treat. I can’t remember the last time I actually paid attention while selecting various key terms in other games, but I was draw in basically from “GO” in Subsurface. 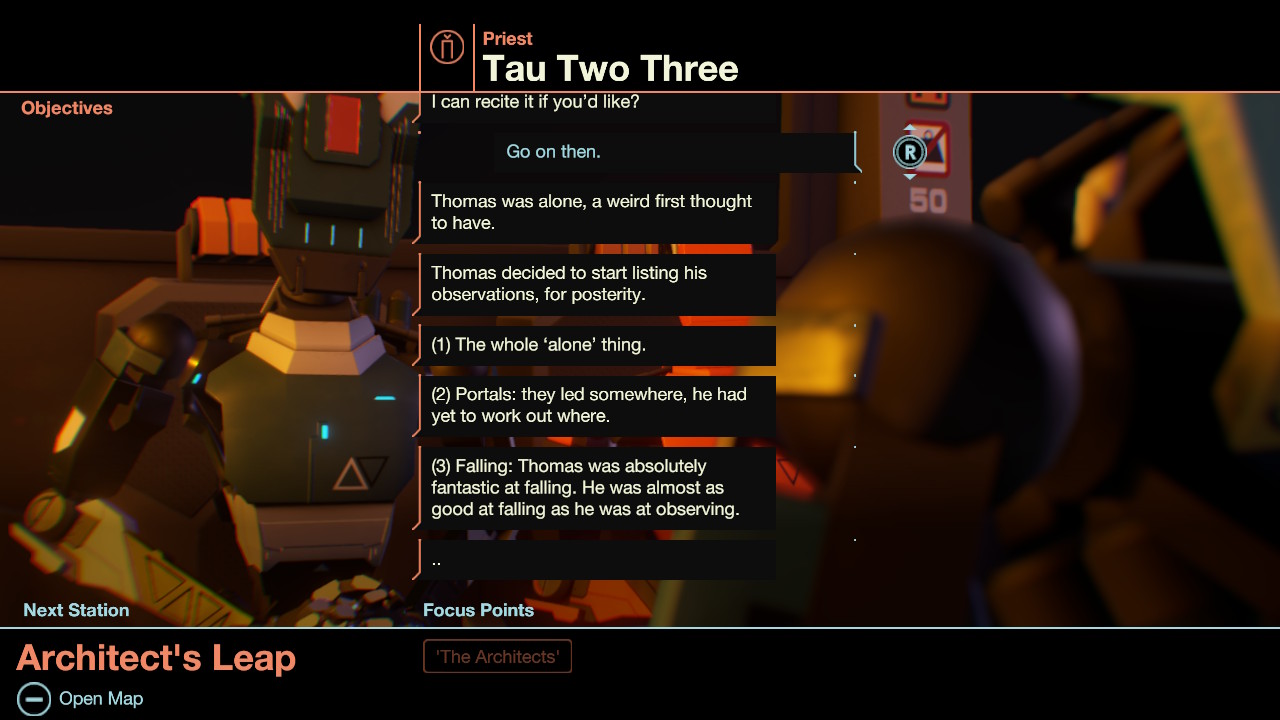 As for how the game runs on Switch, everything is perfectly fine. You won’t be getting 60 FPS or any kind of motion controls, but Subsurface Circular isn’t a game that demands an ultra-fast framerate. The visual design shines through, especially in handheld mode, and the game doesn’t slow down or glitch out. This is a really polished game that has an eye catching art style and works without a hitch.

Saying anything else will just ruin the magic that this short, intriguing title holds. With its low price point and great pacing, I’d encourage everyone to check this out. If you’re a fan of sci-fi, this is almost a no-brainer, but even people who are typically not interested in visual novels would do well to try Subsurface Circular for themselves. The organic integration of puzzle elements makes for one of the best detective games around.