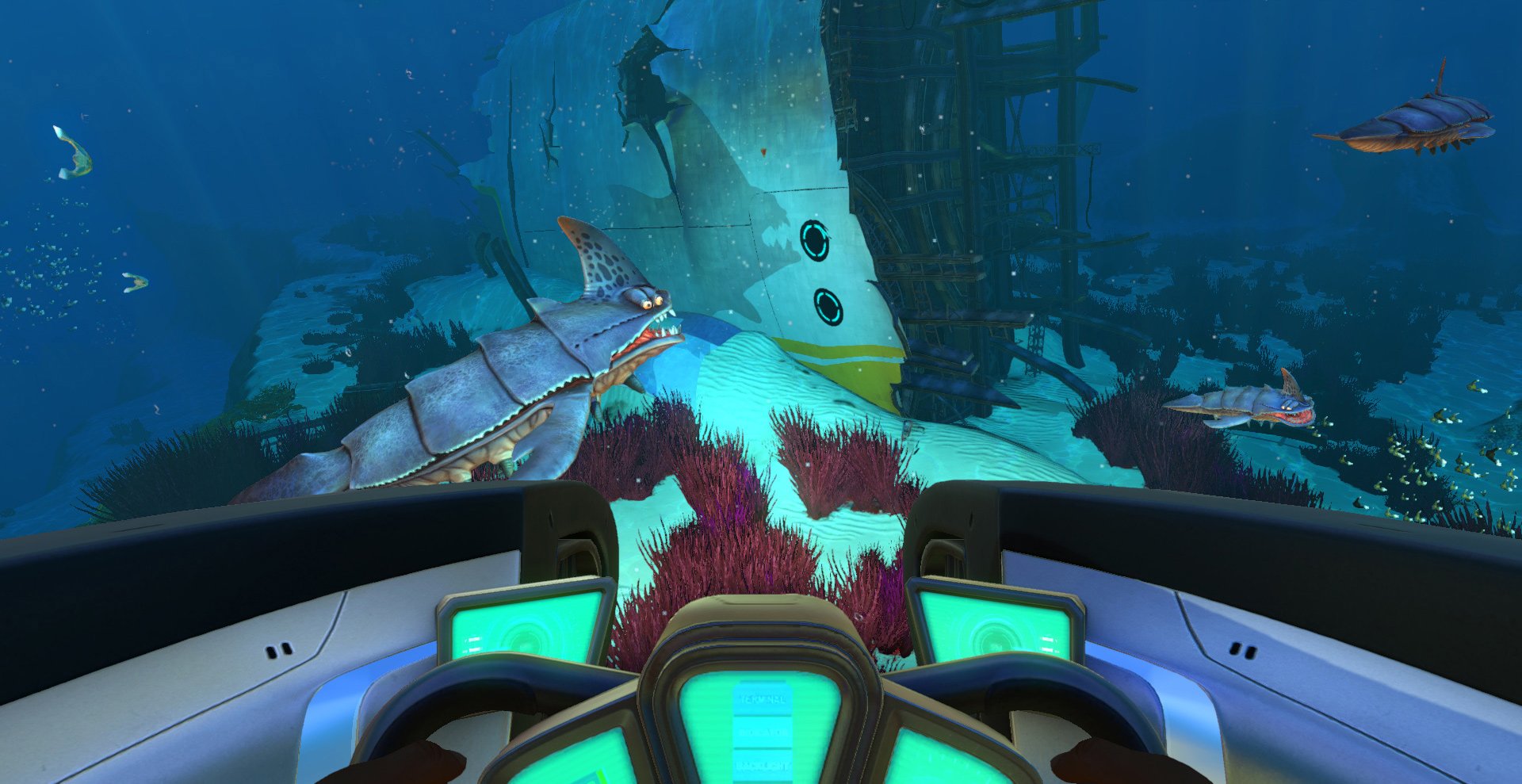 A league of its own

Subnautica is an explorer’s dream.

In the distant future, you’re seemingly the sole survivor of a disastrous crash landing on a vibrant ocean planet. Stranded with little more than a lifepod and a rather magical fabricator that can turn resources plucked from the ecosystem into sophisticated equipment, it’s up to you to figure out what happened to your ship, the crew, and how to get back to a home that’s far, far away.

Unknown Worlds has fully launched Subnautica following a long but successful stint on Steam Early Access. The wait was worth it. This might be the best underwater game ever made.

Like many survival games, Subnautica won’t hold your hand. It doesn’t need to.

While your current lost-in-space predicament is far from ideal, on the bright side, Planet 4546B is brimming with possibilities. It sows the seeds of curiosity with lush environments that feel fantastic yet believable, hand-crafted, and rich with detail. The place is just begging to be scoured, and you’re actively rewarded for doing so. In fact, that’s the true point of the game — to explore.

There deliberately isn’t a mini-map, much less a map screen, and Subnautica is better off for it. The onus is on you to figure out which biomes are located where and what materials they produce. It can be overwhelming to get a lay of the land at first, but mentally charting everything out is so rewarding in the end. The different zones have their own identities, from the cheery picturesque shallows to the green-tinted kelp forests to the glowing Bulb Zone. I constantly felt like I was making genuine discoveries.

If you’re tired of navigating procedural landscapes, look no further. And if you’re burned out on the survival genre, don’t write this off yet. From moment one to hour twenty, I was hooked. The last time I was this absorbed in an alien world, I had just set foot on Tallon IV in Metroid Prime. The two games share a similar atmosphere and the endlessly satisfying ability to scan flora and fauna.

While you can kill and cook small fish, combat is by no means a focal point. That’s true in the beginning when you only have a knife to defend with and it remains true even once you’ve built a submarine, multiple bases, and a deep-sea mech further in. Subnautica is home to nightmarish creatures, but thankfully you aren’t really meant to face them head on. Fleeing is a valid option.

There are a few different modes, one of which can help allay fears if you have a phobia of the ocean. Creative Mode lets you freely explore and build bases to your heart’s content. You aren’t in danger and everything’s unlocked. Survival Mode has you managing food and water needs. Hardcore Mode gives you one life, which, good luck. Lastly, Freedom Mode falls in the middle — you don’t have to worry about hunger or thirst, but you do have to track your oxygen and health. That’s a nice balance. It’s still a satisfying challenge, but you won’t get bogged down by inventory-hogging sustenance items.

It’s worth explicitly mentioning that Subnautica has a proper story — you aren’t just poking around for materials to craft bigger and better toys to aid in your exploration, though that is a large part of your progression. As you search wreckage and other not-so-lucky lifepods for new blueprints, you’ll fill in text and voice logs on your PDA. Gradually, it becomes clear that the crash was no accident and the planet has been ravaged by an infection. The story isn’t in-your-face, which I appreciated. You can get the gist without ever digging into files, but doing so will give you a fuller picture.

Other humans have come before you, and there are some awfully suspicious abandoned alien bases out there. It’s not just a matter of surviving long enough to send a distress signal; your journey has complications. The answers you seek are lurking in deep caverns where extreme pressures and boiling temperatures are of grave concern. Also, monsters. Horrible, no-good monsters.

My first halfway promising expedition down there came seconds away from catastrophe. I got utterly lost with a massive creature on my tail and an exosuit that would explode if it took one more dent. Making matters worse, the thing was almost out of energy — and I forgot to bring backup power cells or extra health kits. By some miracle, I stumbled across what I was looking for at the last moment. I made it safely inside, smashed the save button, and cursed in relief. It’s a trek I won’t soon forget.

Even after beating Subnautica, these sorts of excursions haven’t become any less thrilling. It feels like I’ve only scratched the surface of what’s out there. I always liked what I played of the game during Early Access, but now that it’s a complete whole, Subnautica is so much more fulfilling.

If I have any complaints, it’s that some base-building mechanics could be clearer and certain parts of the story progression could be better signposted. Even when I was on the right track, it didn’t always feel like it. There’s also potential for minor graphical weirdness from time to time, as well as pop-in.

Otherwise, it looks and plays beautifully. There’s no denying that cooperative multiplayer would’ve been a fun bonus, but I don’t miss its absence too much. Subnautica works brilliantly as a serene, lonely, contemplative adventure. It’s one of those rare games I’d take to a desert island.