Not only did it stand out in the genre with its one-of-a-kind alien water world, it also nailed a sense of genuine chart-your-own-course exploration. I felt like I had to work for every discovery, whether it was some bizarre biome or a new tool that would help me dive deeper, but it never felt like work. The game even had a pretty compelling sci-fi mystery to unravel, complete with an actual ending to reach.

In my 2018 review of the original Subnautica, I suggested that it might be the “best underwater game ever made.” I stand by that today. Free-diving, recklessly piloting a submarine, stomping around the seafloor in a Prawn Suit — it felt fantastic to get to know Planet 4546B back then, and it still does now.

Three years later, after another Steam Early Access push, Unknown Worlds has put the finishing touches on Subnautica: Below Zero. Version 1.0 is done, and I’m glad I had enough restraint to hold off. 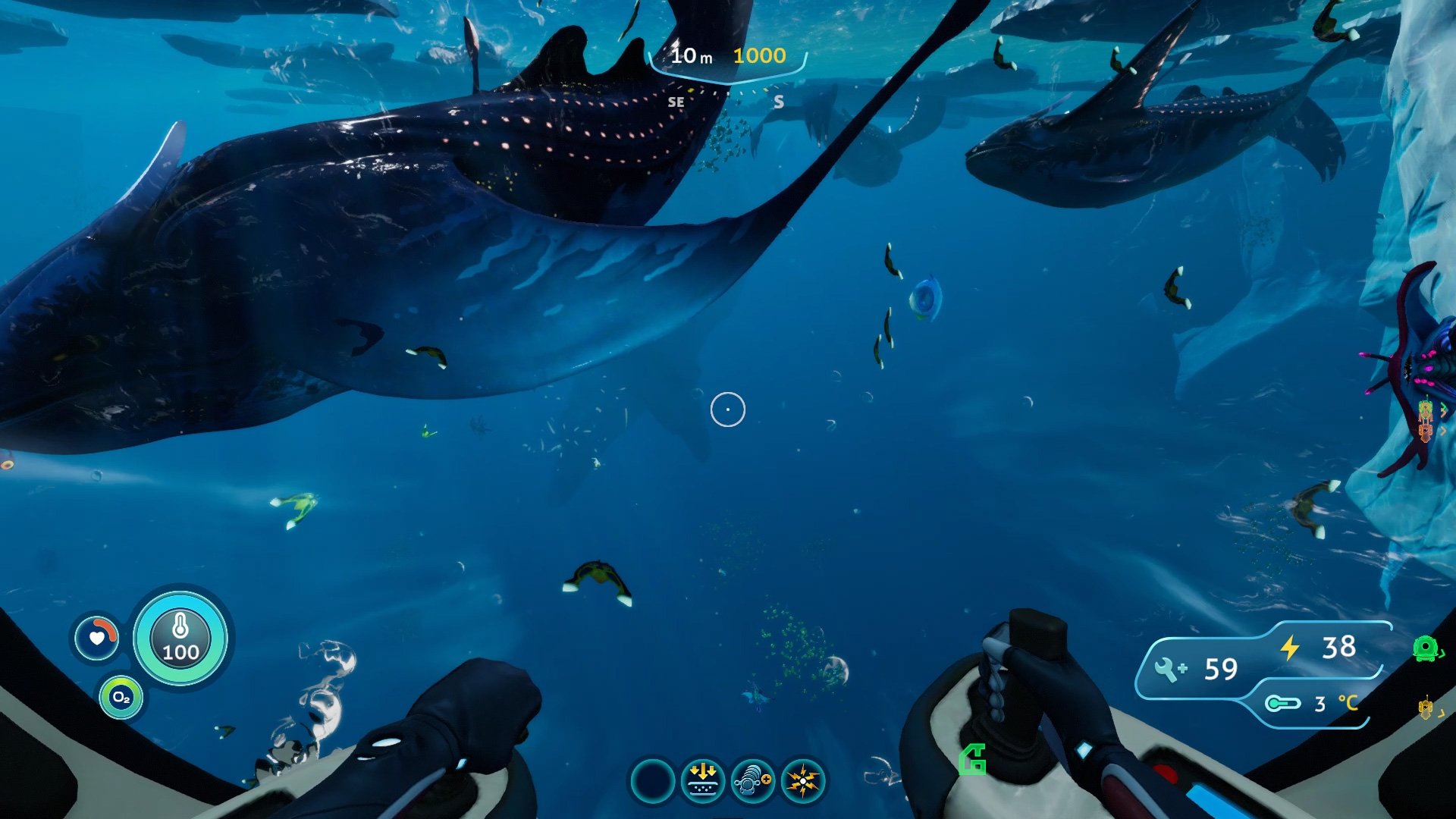 Subnautica: Below Zero takes a lot of cues from its predecessor, and there are even story threads across both games, but you don’t need to have played Subnautica (though I recommend it). You can think of this full game as a complementary yet standalone experience. It’s sort of like a condensed, refined, and more character-driven take on the original Subnautica, set in a frigid corner of the same planet.

The events of this space-faring story are once again set in motion with a crash landing, but this time, it was intentional — sort of. You play as Robin, a xenologist who sneaks onto Planet 4546B to learn the truth about her big sister Sam only to find out that this isn’t just some oceanic planet with freaky little cute penguins roaming around. Ancient aliens, a nigh-unstoppable disease, and a power-hungry corporation all fit into the bigger picture. Before her accident, Sam had been working in an icy region known as Sector Zero. Was it really negligence? That’s the official line from Alterra, anyway.

Compared to the first game, the story in Subnautica: Below Zero has less of a “lone survivor” feeling, although you won’t meet many characters face-to-face, and there are definitely still lengthy periods where you’ll soak in the chilled-out music and ambient wildlife noises rather than have full-on conversations or fire up audio logs. That said, Robin speaks her mind; she isn’t a silent protagonist.

I thought the quiet adventurer approach worked well enough last time given the way Subnautica‘s narrative slowly came into focus piece by piece by scanning ruins and artifacts, but for Below Zero‘s more immediate and personally motivated story, there had to be back-and-forth. Robin takes everything in stride, and while she’s determined as hell, she mostly keeps it light. The voice acting is a step up in general, to the point where I didn’t want to skip any audio recordings I found in the world. I particularly liked Robin’s banter with an entity known as Al-An during the back half. No spoilers!

I’ll say this much: I felt enough of a push to want answers about Sam’s fate. And I had enough of a drive to collect every scattered resource needed for Al-An’s questline, which culminates in a fitting ending.

Mechanically, Below Zero is very similar to Subnautica — something I’m totally cool with. Limited oxygen and intense pressure still heavily factor into your ability to explore the wider region beyond the safety of your life pod, as do all of the tools and playthings you’ll gradually unlock. It’s such a fun loop.

Compared to other survival games that can get bogged down with boring resource fetching, I’ve always appreciated the way the Subnautica series makes these chores feel entertaining and, if you know where to look, fairly quick. There’s a logic and consistency to this ecological world. A big part of these games is learning your surroundings from memory. In other words, once again, there’s no map. That might sound obtuse; in practice, it’s rewarding. The sooner you figure out where each biome is and what makes it distinct, the sooner you can establish a more permanent pad and craft vehicles for longer expeditions.

Below Zero reuses many key items like the Scanner, Repair Tool, and Habitat Builder, and also adds a few new playthings like the Thumper, a device that will immediately make sense to Dune fans. In terms of pure helpfulness, the handheld Mineral Detector is a godsend when you know you’re in the right area for a resource but you can’t quite spot it. I kind of adore the Air Bladder, a sort of “oh shit I’m about to drown” emergency option that launches you toward the surface. The tool gets phased out once you have a large oxygen tank and a submersible Seatruck, but early on, I used it every chance I got.

Above all, Below Zero nails the incredible otherworldly landscape and creature designs that made the first Subnautica such a treasure. From lush kelp forests to deep blue jelly fields to purple hydrothermal vents and unsettling cave systems, the scenery is begging to be fully explored. The wow factor never lets up, either. Even as someone who went hard on the last game, I was consistently caught off-guard. 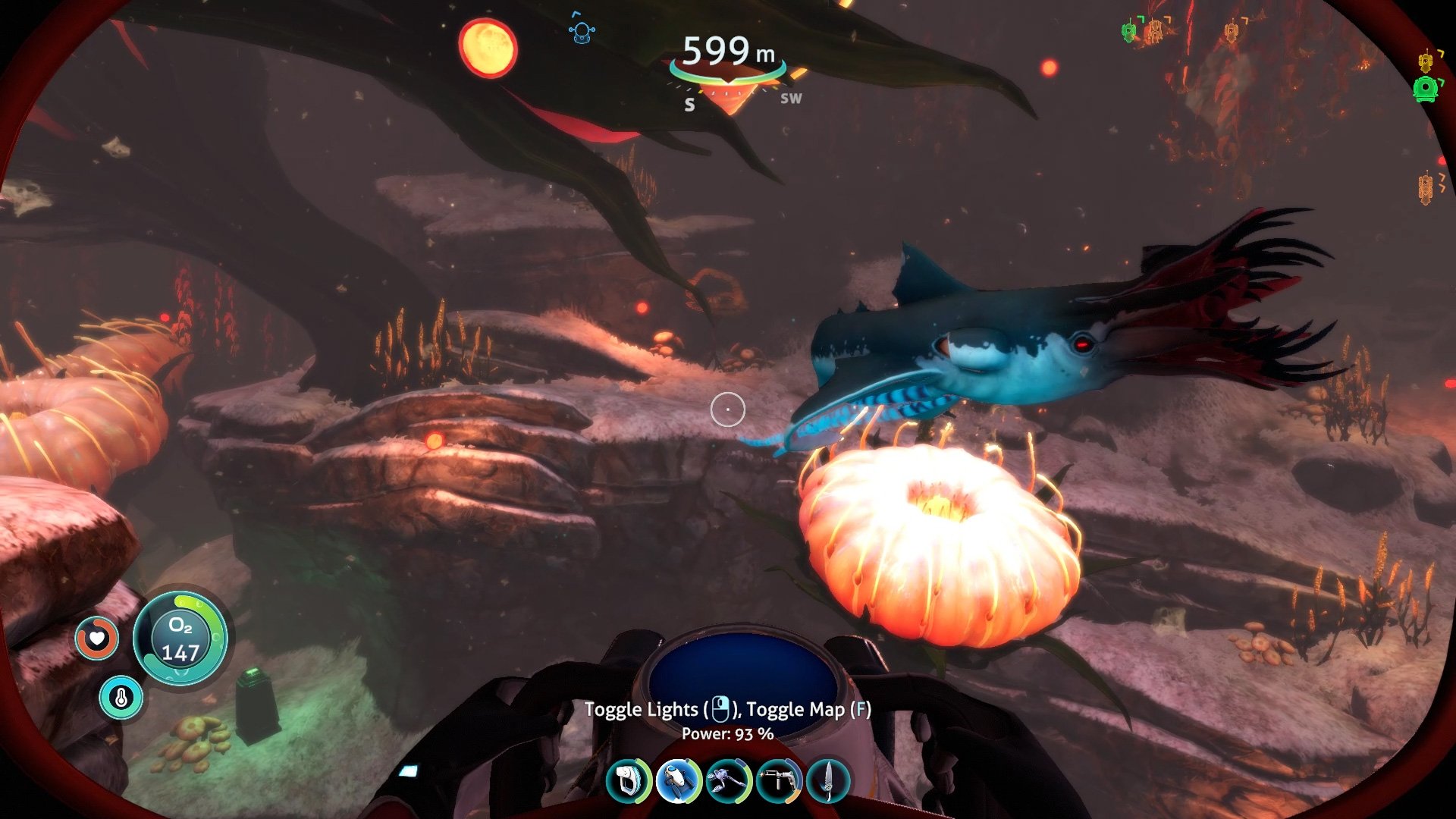 The majority of the Below Zero takes place underwater, so it makes sense that there would be a remixed vibe to your toolkit as well as some omissions like the hulking Cyclops submarine. That didn’t bother me, but it’s worth pointing out. Generally speaking, this game is more compact, with little to no wasted space, and it’s a bit less scary. If the dark depths of Subnautica freaked you out a little too much, I think you’ll have a smoother time navigating these waters. There’s a too-deep-for-comfort dive that’s equivalent to the Lost River and Lava Lakes trek, but it’s not nearly as high-stakes or paranoia-inducing.

Then there’s the greatly expanded on-foot gameplay, which is where Below Zero‘s snowy theme and story are the strongest. As much as I dig the wintery ambiance, the ice-covered areas are cooler to look at than they are to play. I kept trying to foolishly rush through them, which only got me more turned around. My advice for the snowy areas is to take your time to truly understand their winding layouts, and, if nothing else, leave some well-placed beacons so you can find your way back to the ocean.

In theory, I like the idea of needing to keep my temperature up by ducking into caves during a horrible storm, deploying a Thumper to keep the pesky Snow Worms at bay, and zipping across the Arctic Spires on my Snowfox hover-bike. I also love the idea of piloting a remote-control Spy Pengling that can blend in with the natural world. The drones can squeeze into tunnels to grab resources, and bravely snatch a handful of Snow Stalker fur. These land-based zones should be high points. Instead, they fall short. 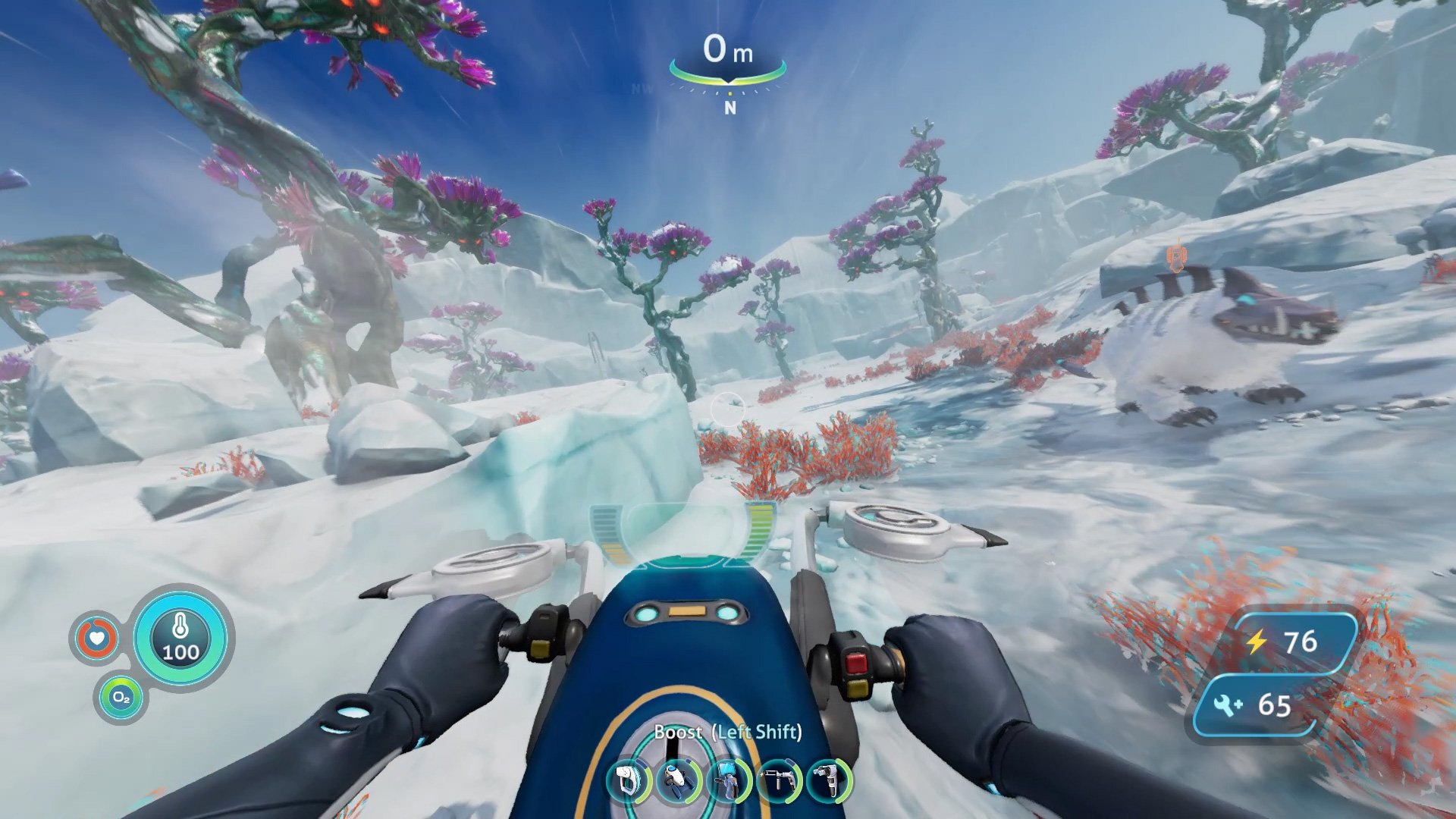 When it comes down to it, there’s no topping the freedom of underwater movement with the Seaglide, the Seatruck, or even the Prawn Suit once you’ve gotten the jump jet and grappling arms. Again, the Snowfox looks neat, it just doesn’t feel as effortless to pilot — but I stuck with it to see Sam’s story through to the end. In an otherwise excellent game, some of these out-of-water areas really stand out.

So much of Subnautica: Below Zero is excellent, though. If you enjoyed Subnautica, you’ve gotta play this too — it’s beautiful. And if you tried the first game but couldn’t handle the scary ocean vibes, you might fare better this time. All in all, I’d say it was 15 hours mostly well spent, and now that I’m done with the story, I can concentrate on styling my main base and building a few zany outposts in precarious places.

Even if there are a lot of shared elements between the two games and the ground-based traversal isn’t everything it’s cracked up to be, Below Zero‘s greater focus on character-driven storytelling lands well and this standalone adventure captures the unrivaled magic of underwater exploration all over again.