Strike Suit Zero came out just three months ago and already it has a spin-off. Strike Suit Infinity doesn’t attempt an epic narrative or try to establish an enthralling science fiction world that you want to live in immediately. It does, however, encourage you to blow up as many space ships as you can with your energy weapons and missiles.

A game that only focuses on mechanics can feel like such a pure experience, which works especially well for Strike Suit Infinity since its mechanics are great once fully grasped. The bigger issue here is that the packaging can be a bit vague and wonky. 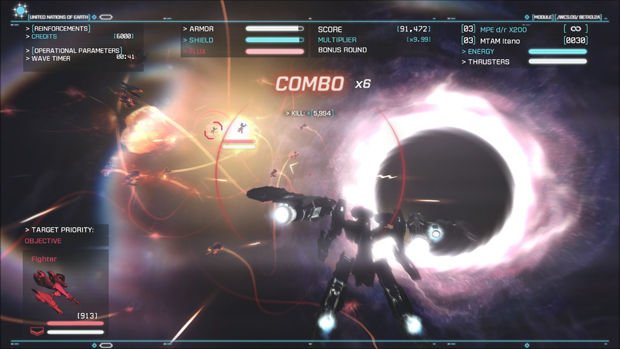 Strike Suit Infinity is a pure arcade-style experience. The developers have stripped away any semblance of plot and narrative, leaving a bite-sized game focused on pure gameplay mechanics. The only factors pushing the player to continue playing are dreams of high scores in conjunction with the enjoyment derived from mastering the game’s space shootin’ mechanics.

Strike Suit Infinity is mechanically identical to its predecessor Strike Suit Zero, so if you’re familiar with how all of that works then you’ll feel right at home. It isn’t a hardcore and complex simulator like Evochron Mercenary, but the controls are far from simple. Movement controls are basic enough to grasp, but performing well requires a lot of keyboard presses in some intense situations, which will all come with practice.

The most important gameplay element is each ship’s “Flux” mode, which allows the ship to transform from a traditional vehicle into an anthropomorphic mech suit, not too dissimilar than something in Gundam Wing. Flux works off of a meter, which is increased by killing enemy ships and is drained when firing while in Flux mode, so it is important to manage it well, especially considering the goal is to get a high score.

The in-game tutorial does okay in terms of introducing everything to the player, but leaves a lot to be desired. It doesn’t do a good enough job of actually having the player implement the controls that they’ve just learned or explaining the ins and outs of the scoring mechanics. After completing the tutorial and heading into the core game itself, I still felt overwhelmed almost immediately. It does eventually begin to “click,” however, while progressing through the various rounds of increasing difficulty. 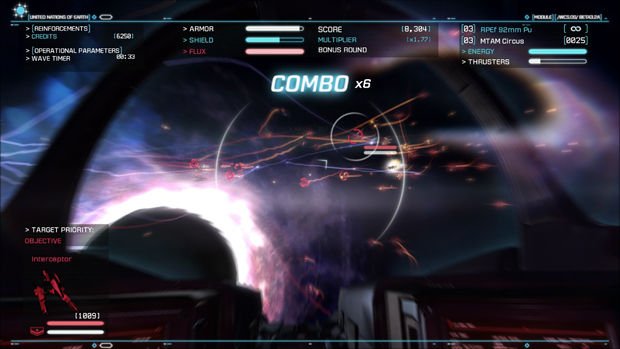 Gameplay is split up into 18 rounds, each with its own leaderboard and enemy combinations. Each round has multiple waves, each one getting progressively harder. A multiplier is earned if a wave is cleared within a certain amount of time, and if not, the next wave will come in on top of what’s left from the previous one. Depending on performance, credits will be earned which can be spent after the round is over.

Said credits can be used to buy reinforcements such as Fighters, Bombers, Frigates, and so on. The pre-mission briefing mentions which of these reinforcements will help the most during the upcoming round, and utilizing them to their maximum potential is what will elevate players to higher leaderboard slots. It’s also just really cool to see your allies tearing it up alongside you in the space chaos.

Credits can also be used to upgrade squad pilots, but the game doesn’t explain what this does at all. It might increase the AI of the hired reinforcements, allowing them to be more accurate and dodge incoming missiles more often, but there is no way for the player to actually know. The reinforcements themselves also aren’t detailed — what are the benefits of Bombers over Fighters? Why should I pick a Carrier over a Frigate? The player is left in the dark and is forced to assume too many things regarding the effectiveness of reinforcements. 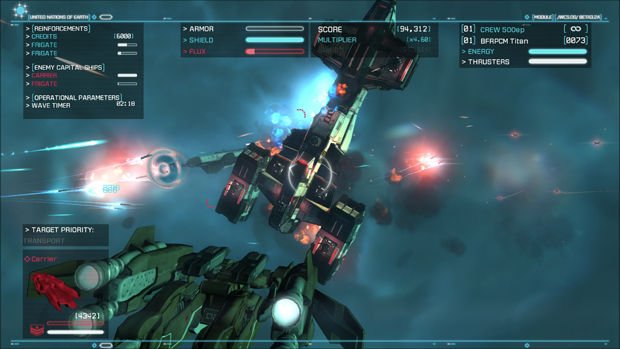 For a high-score-based arcade-style game, the focus on leaderboards isn’t as intense as one might hope. It is possible to check the leaderboards from the main menu and the single-level leaderboards are displayed before choosing a particular level, but once inside the game itself it’s easy to forget about scores. Displaying other players’ scores while fighting off waves would give the player something specific to strive for and really motivate them to achieve higher scores.

The game has crashed on me multiple times, an issue that plagued Strike Suit Zero as well. Since Infinity is score-based, it is in the player’s best interest to complete as many rounds as possible without dying, but when the game crashes on the weapon select screen from time to time, this becomes almost impossible. I’ve even lost an entire round’s progress due to a crash, resulting in playing the whole round over again in order to progress.

The game looks and sounds great, with some seriously sweet weapon sound effects and a particularly memorable final wave tune, though it is borrowed from Zero. The final round is intensified not only because of the difficulty, but also because of the music track that plays. I expected this single track to get tired over time; however, I still found myself humming it after many rounds.

Strike Suit Infinity is a solid deal, given its lower price point. It doesn’t claim to be anything but a wave-based, score-centric space-arcade game, and that works in its favor. The simple design allows the game to focus on its wonderfully satisfying mechanics, even if they aren’t communicated very well through the poor tutorial. If the crashes can be ironed out, what will be left behind is an absolutely great way to marvel at space and its beauty while blowing the crap out of some big, hunking space ships for that ever-so-tasty high score.