Reviewing Story of Seasons: Pioneers of Olive Town has been an interesting couple of weeks, to say the least. When I first got my review code, I was told there would be a day-one patch that would aim to alleviate many of the issues that have plagued the title since its initial release in Japan. While those who buy it on day one will get all of the updates at once, I’ve been playing through it as it’s been slowly fixed in a piecemeal fashion.

It’s real shame the developers have had to spend the past month scrambling to fix the game because it’s is supposed to celebrate the 25th anniversary of the series. And generally, when you’re celebrating a milestone year, you don’t want a public apology to be part of the festivities. 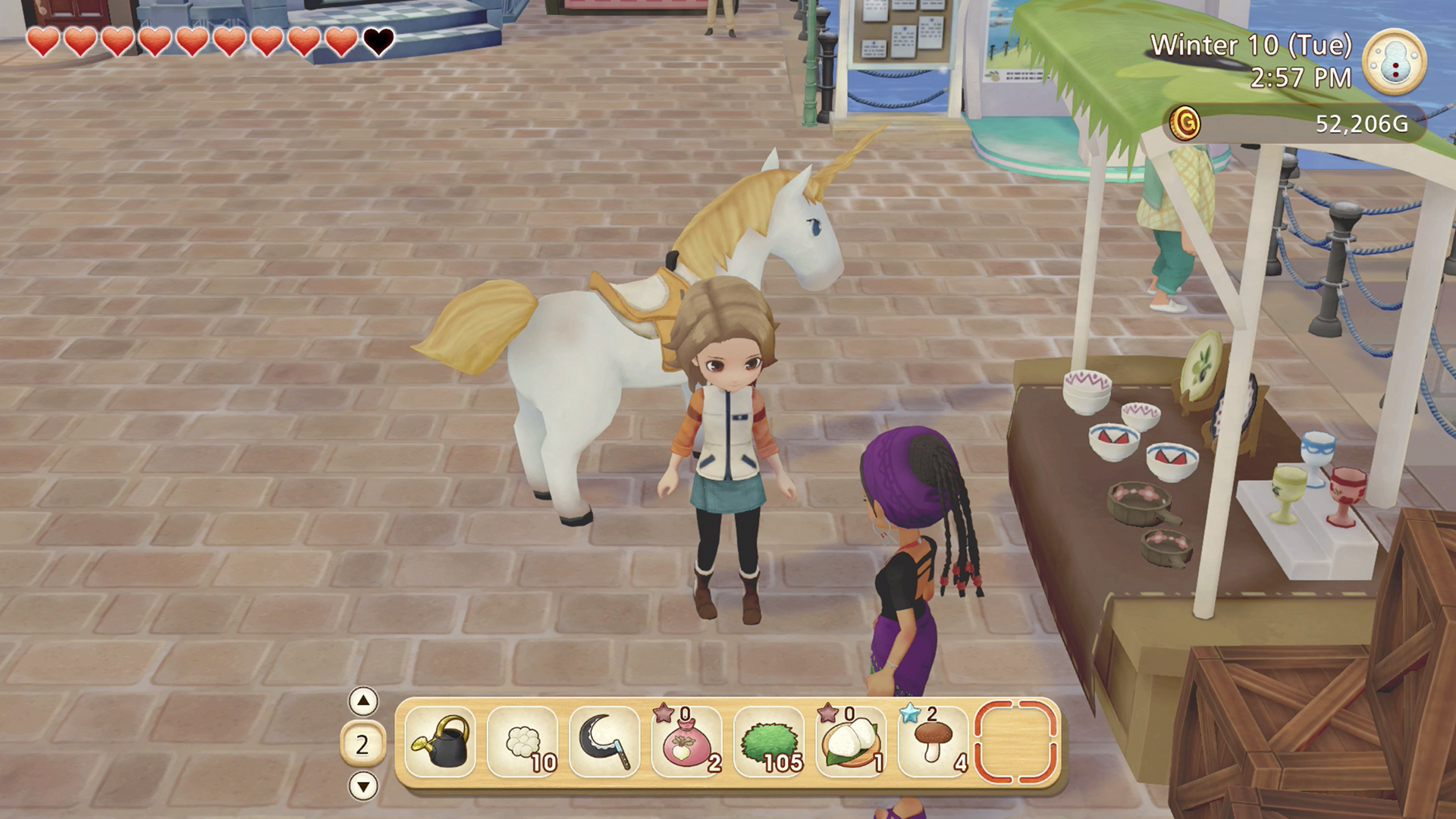 Like the many Story of Seasons of yore, Pioneers of Olive Town starts with an escape from the city to a more laidback life in the country. The titular Olive Town was founded years before by your character’s grandfather, who set up the local farm you’re about to take over. He’s no longer with us, but there are those in town who remember him fondly and have high hopes for you to get his old farm back up and running. The only thing standing in your way is the quick passage of time, a low stamina meter, and a fickle-beast known as Mother Nature.

Unlike what we’ve seen in past Story of Season titles, the farm in Pioneers of Olive Town isn’t rundown; it’s nonexistent. Whatever your grandfather built all those years ago has been reclaimed by nature, and a forest now stands where his fields were once laid. I almost feel bad for even trying to rebuild the farm because I’m going to have to decimate an ecosystem to do it. But that’s the name of the game, and to its credit, the flora is ready for a fight.

What was most surprising to me about Pioneers of Olive Town is that for the first year or so of my time on the farm, growing crops was the least of my concerns. I had a small garden outside my house, sure, but most of the early days were spent trying to get ahead of what nature threw at me. Trees grow at an alarming rate, rocks appear everywhere, weeds fill my farmland, and puddles show up whether there was rain or not. I know the elements threw farmers curveballs in past titles, but the way nature regrows and stifles progression here is almost aggressive. The only way I could make progress of any kind was to dive head-first into the game’s expansive crafting system.

Olive Town‘s progression loop places a heavy emphasis on the use of Makers, machines you put ingredients into to make items that can be sold, crafted, cooked, or inserted into other Makers. Outside of the basic crafting recipes you start with, you’ll need a Maker to convert just about everything you grow, chop, collect, or mine into something more valuable or useful. Want to turn that honeycomb into honey? Put it in the Honey Maker. Somebody asking for a gold ingot on the request board? Mine some gold ore and put it in an Ingot Maker. Want to buy a new outfit? First, get some grass and put it in the Thread Maker to make thread. Then put that thread into the Textile Maker. Don’t forget the dye. You can make that in a Maker as well. Makers are not new to the series with Olive Town but they are more prevalent, and you should’t be surprised if your farm has a lot of these machines taking up space as you expand.

Tying progression to the Makers certainly gives the game some long legs, but it makes for a frightfully slow first four seasons. As I said, I didn’t get a lot of farming done until I was in the spring of my second year. Most of my first year was just preparing myself for when I could actually find the time to farm. I can’t remember the last Story of Seasons game where I spent so much of my time upfront in the mines, but it’s necessary to even have a shot of moving things along in a timely fashion. It was also the only way I could help the town improve.

There are a few small storylines your character is a part of in Pioneers of Olive Town, but the central narrative has to do with improving the town to boost its profile and attract tourists. No matter how small, when changes are made around town, they are visible and do indeed class up the joint. Not only do your efforts help give the town a glow up, but they also add some substance to it. 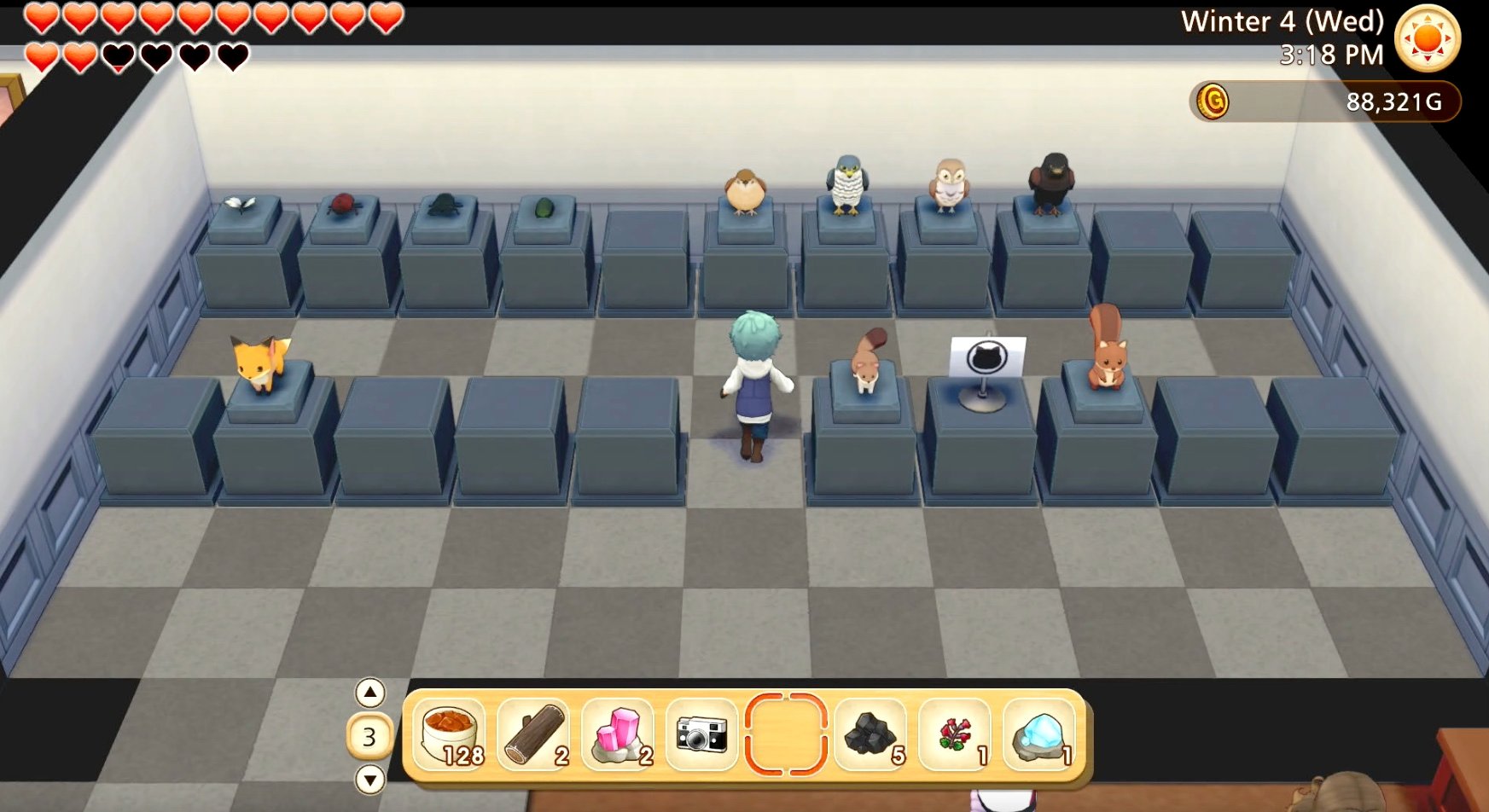 One of the central locations in this little burg is the museum, and if you’ve played Animal Crossing, this will sound very familiar. When you first get to town, the museum is all but barren. In order to fill it with exhibits, you’ll need to donate fish you catch, treasures you find buried, and photographs of wild animals you take that are turned into little statues. There’s also a woman there who’ll analyze the unknown items you bring in.

Like the Makers, the museum adds a hefty dose of content to the game as it’s unlikely players will be able to fill it up too quickly. Unfortunately, despite all the work that goes into completing it, it’s not a rewarding endeavor. The museum is rather bland with tiny displays that don’t really show you the details of the artifacts or fish you’ve donated. It’s one of the clear indicators that, despite this being the game to celebrate the franchise’s 25th anniversary, it’s still a budget title like all the ones that came before it.

Now, there is nothing wrong with being a budget title as the industry needs more games that aren’t AAA bank-breakers. But, with Olive Town launching in the state it did in Japan, and the issues the game still has as it nears our shores, it’s not hard to think this game could have used a few more weeks in a Maker of its own. 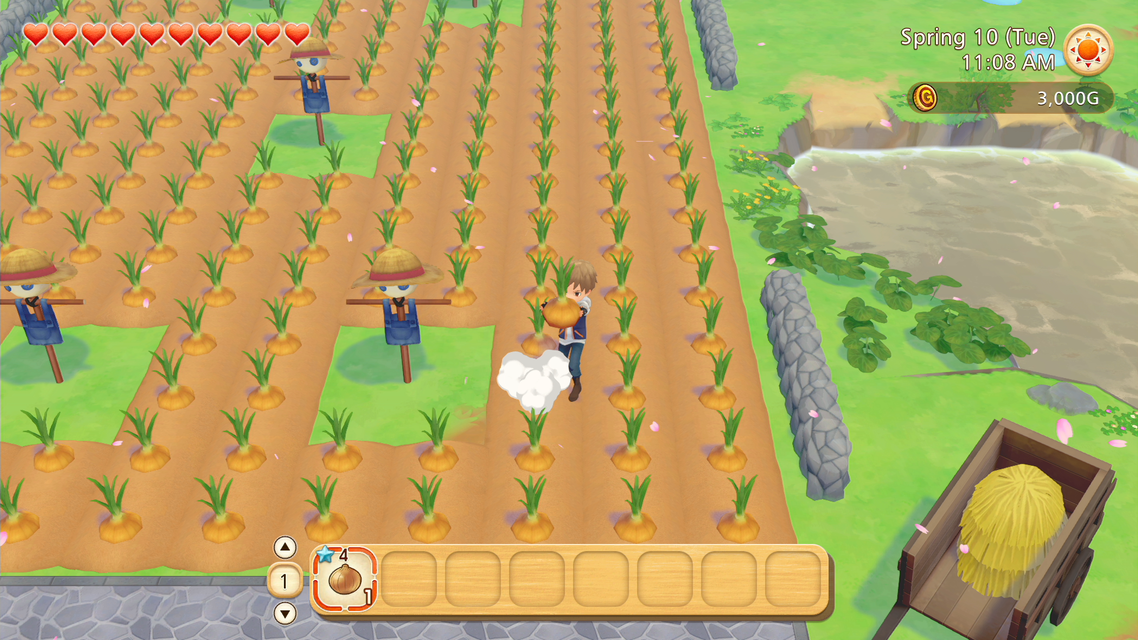 Depending on your tolerance for loading screens, the biggest issues you’ll probably deal with if you play this day one are the frame rate and occasional instances when the game will freeze momentarily. If you’re like me, it won’t be that noticeable at the beginning. But as you continue to build your farm, build those Makers, and build the new sprinklers that can take the pressure of watering large fields off your back, the frame rate starts to slow more often, and those momentary freezes begin to happen with concerning frequency. In other words, the more I played, the worse the game ran. I also keep running into a bug where the sound effect from my moped just won’t stop until I move on to the next day.

Bugs and performance issues aside, there are also smaller elements that could have used more time. Take food, for instance. You can order a variety of dishes at Olive Town’s two restaurants, but it doesn’t matter if you’re having a four-course meal or simply a cup of coffee, the developers created just one model for food: a four-plate meal with fish, soup, salad, and bread. That’s it, for every meal everybody eats in this game.

There is also the matter of tourism. While tourists do show up during the game and walk around the town, they sure do seem to be absent whenever there is a big event to be had. None of them bother checking out the museum, and despite the fact I’m told my farm is part of the reason why we’re getting visitors, nobody seems very interested in stopping by for a little agritourism.

I would have like to have seen the effects of increased tourism beyond just watching people wander aimlessly through Olive Town’s pristine streets. Get them into the restaurants or the hotel or the salon, something to adequately illustrate how their presence here is a boon. 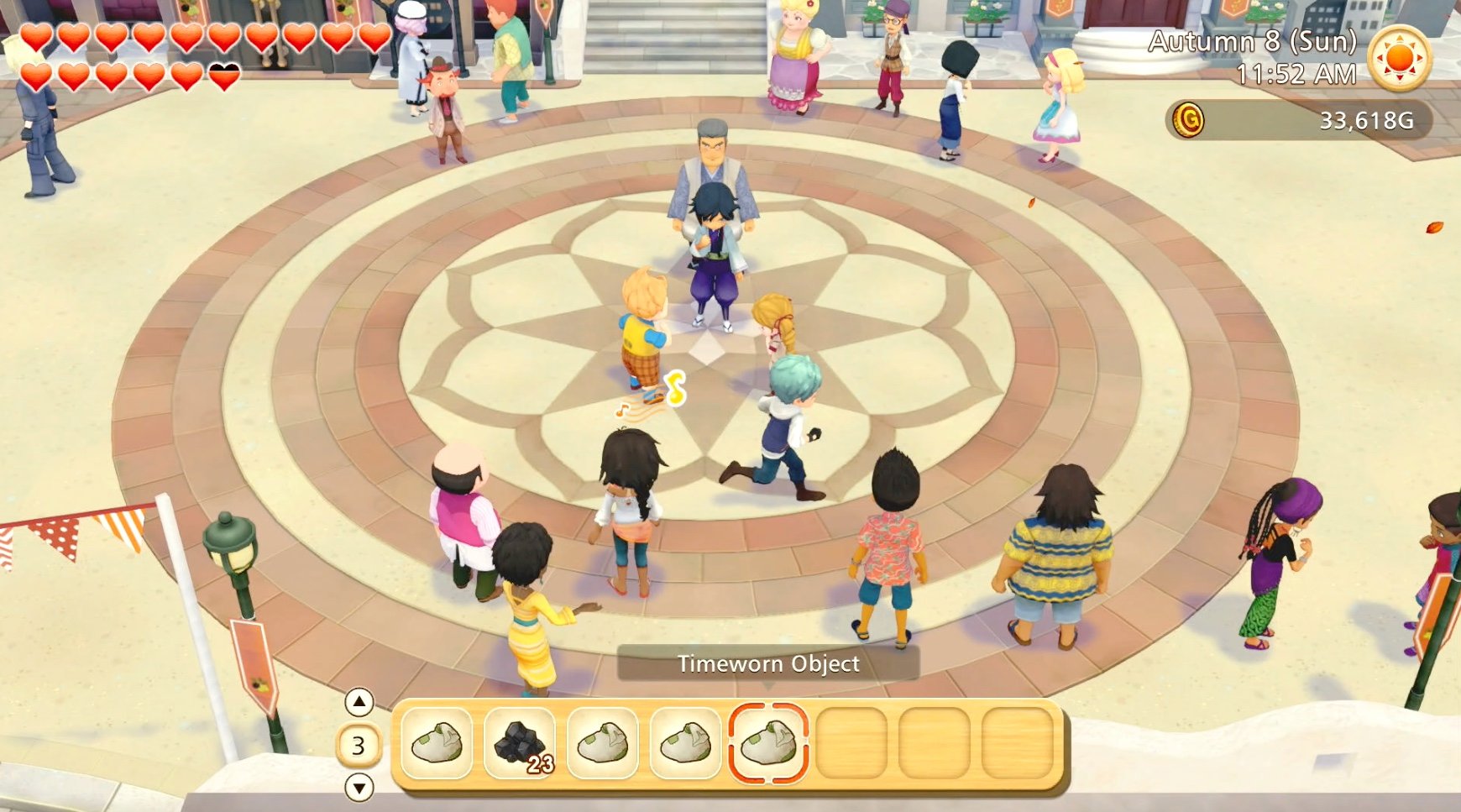 I only say that because I truly want what’s best for this village. I think Olive Town is probably my favorite location since Grand Bazaar’s Zephyr Town. And I’ve come to enjoy the dynamic theme songs and personalities of the town’s residents, but those only shine through when you raise your relationship with them high enough to unlock one of their events. Any other time, they fall prey to how residents acted in past games: standing lifelessly and speaking in short, personality-free sentences or just referencing whatever town event is coming up or has just passed.

It would be nice if there were context-based dialog sewn into the game, like when I’m riding my moped around town or wearing a giant buffalo costume. It would also be nice if there was a secret way to unlock Jacopo as a bachelor because he really is the best marriage material here.

I get that my complaints probably sound like I’m nitpicking the game, and maybe I am asking too much of a budget title, but really, these issues illustrate that despite the fact Pioneers of Olive Town marks the silver anniversary of the franchise, the developer didn’t really go out of its way to make this entry something special. This is a safe and standard Story of Seasons game. It doesn’t rock the boat, it doesn’t try anything groundbreaking like when Marvelous released Rune Factory to mark the franchise’s tenth anniversary; it’s just more of what we’ve seen before with a few small twists on the formula.