Sometimes you need to return to your past to see a way forward, and honestly, I believe nothing could be truer for the Story of Seasons franchise. Since the split with Natsume, its games have gotten better, but those improvements have been saddled with a lack of trust in its audience and this overwhelming need to hold our hands for hours on end.

A return to Friends of Mineral Town may not have been my first choice for a mainline Story of Seasons game on the Switch, but after spending several springs in it, it’s the game I most want the developers to look back at when they get around to creating the next original entry in the series. 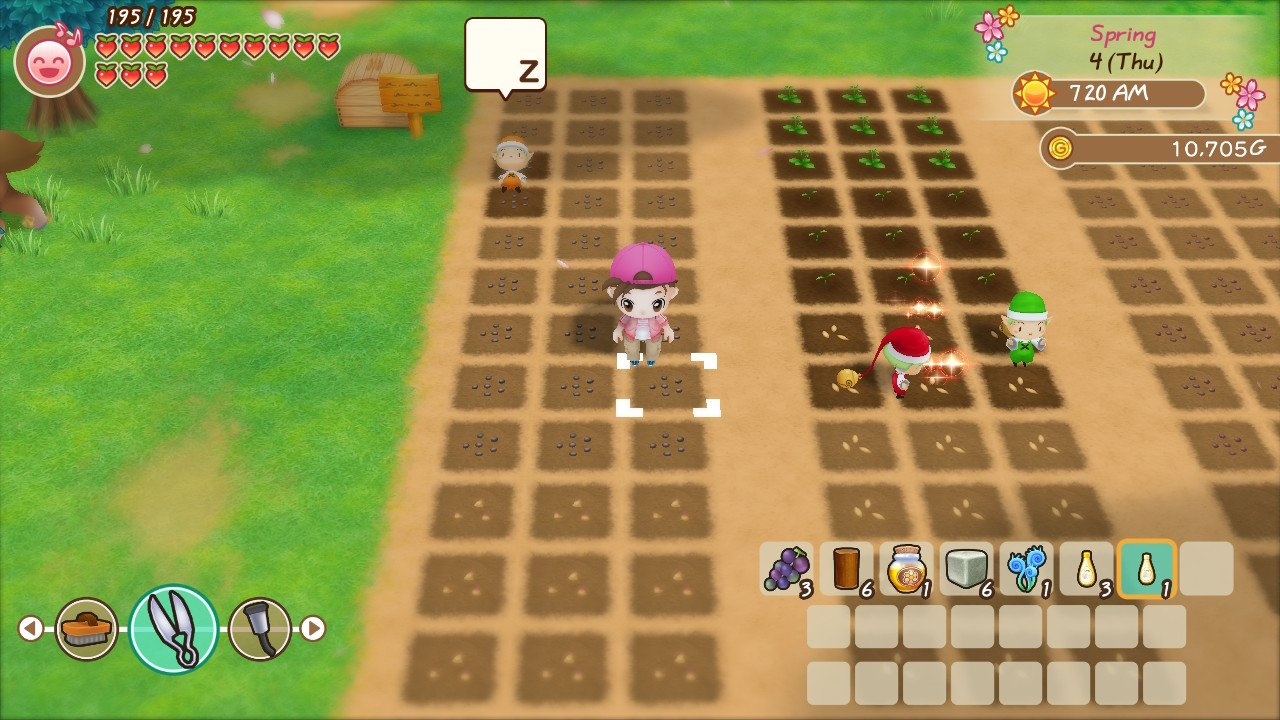 After playing through several Story of Seasons games with glacially slow openings, it’s nice to return to the more expeditious starts found in the earlier franchise entries. Friends of Mineral Town gives players a quick trip to their youth when they first came to the farm that would one day be theirs before handing over the reins. There’s no long introduction of the townsfolk, no elongated tutorial, no tour of the town you have to complete before you’re given the okay to start plowing the fields. You’re given some tools and a horse to raise, then are left to your own devices.

If you’ve played Friends of Mineral Town before, know it’s a walk down memory lane. It does feature a completely new translation, but the layout of Mineral Town and its surrounding area keeps the familiarity of the original with some adjustments that make it a bit more connected. The mines and the shops and the sprites are exactly where you remember them. Some of the quirks of the original, such as having two beds side by side, are retained in the remake.

If you’re coming to Mineral Town from a more modern farming sim, it can often feel underwhelming. Several of the seasonal events, such as the fireworks show, Moonlight Night, and Starlight Night, are disappointing in their execution. Character dialogue is repetitive, even when you’re wooing your future husband or wife. In my quest to marry tortured artist Brandon as quickly as possible, I was subject to the same, emotionless quotes even as I could see his heart growing more fond of me. Dialogue does improve during the events you can unlock for each marriage candidate, but the quality and length of these interactions vary greatly.

Marriage has always been a staple of the series, but Friends of Mineral Town on Switch is the first time same-sex marriage is a possibility without having it disguised as a “best friend” system. I pursued Brandon right off the bat and in just over a year, we were walking down the aisle. Doing it this way gets me hitched faster but it also means I miss out on some of the benefits of certain holidays. On Valentine’s Day, for instance, there was nobody to bring me chocolates because, by this point, I was already dating Brandon.

Tying the knot as quickly as I did was probably a mistake, but I do love that Friends of Mineral Town gives players the freedom to tackle this game as they choose. I pursued marriage like Charlotte York on a Four Loko binge, but I could have spent that time making friends in town or bribing the harvest sprites or building up my livestock. By the end of my first year, I had a fiancé and several gold tools, but I didn’t have a pet, my fields were still a mess of boulders and stumps, my stamina meter was nearly the same as when I started, and I hadn’t won a single event. Going into years two and three, those become my priority, and I appreciate that I could cut my own path through the game without being penalized.

Outside of my romantic pursuits, the gameplay of Friends of Mineral Town is as relaxing and rewarding as it’s ever been. In the early hours, I had this nagging voice in my head saying this remake was more of a “stopgap” title as we wait for the next original entry in the series, but the longer I played, the quieter the voice got. Even if it is a remake of a remake, it’s still a joy to play. Each day passes at a comfortable clip, and while it can seem to move too fast in the first few seasons, once I had my farm and routine established, I found ways to make time. Upgrading my tools with frequent trips to the mine meant I could till my fields and tend to my crops expeditiously. Getting the harvest sprites involved allowed me to expand my operations more quickly, even if I didn’t have a lot of fun getting to that point. 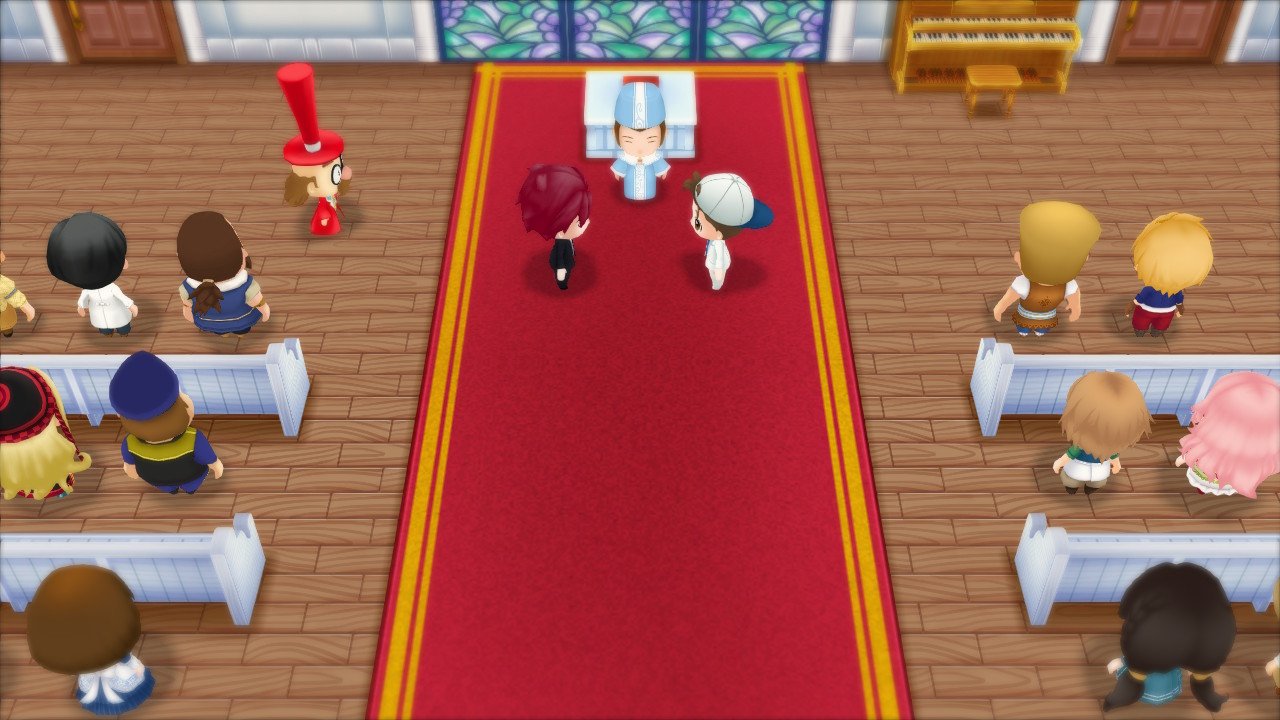 Even if it’s a small part of the overall experience, I didn’t enjoy having to play the same repetitive games with the harvest sprites to improve their abilities. It’s bad enough with one, but playing the same watering memory mini-game with seven of them felt like a chore, and I write that knowing I’m playing a game that’s basically nothing but chores. But it had to be done if I wanted to stalk follow my friends and neighbors around to learn their schedules and improve my relationships with them. You know, without looking at one of the countless guides that were written for the Game Boy Advance version that still very much apply here.

My only other gripe with the game is how your tools and items are handled. Tools are sequestered to the left Joy-Con directional buttons where you click left or right until you land on the one you want. It’s functional, but a quick-select option would be nice. As for your items, you can access those with the right Joy-Con thumbstick and this too could be a little more efficient, particularly when it comes to feeding your animals.

But I don’t hold that against my animals because all of the animals in this game are so darn cute. The art direction, while nothing spectacular and inarguably a step back from what we saw in last year’s Doraemon Story of Seasons, does just enough to capture the look and spirit of the hand-drawn art that’s accompanied the series since the ’90s. Sure, my character runs with the gait of an old-timey prospector, but when Mineral Town is lit up for the holidays during winter, it’s a serene sight. And, unlike the last few entries on the 3DS, Friends of Mineral Town has a rock-solid frame rate. 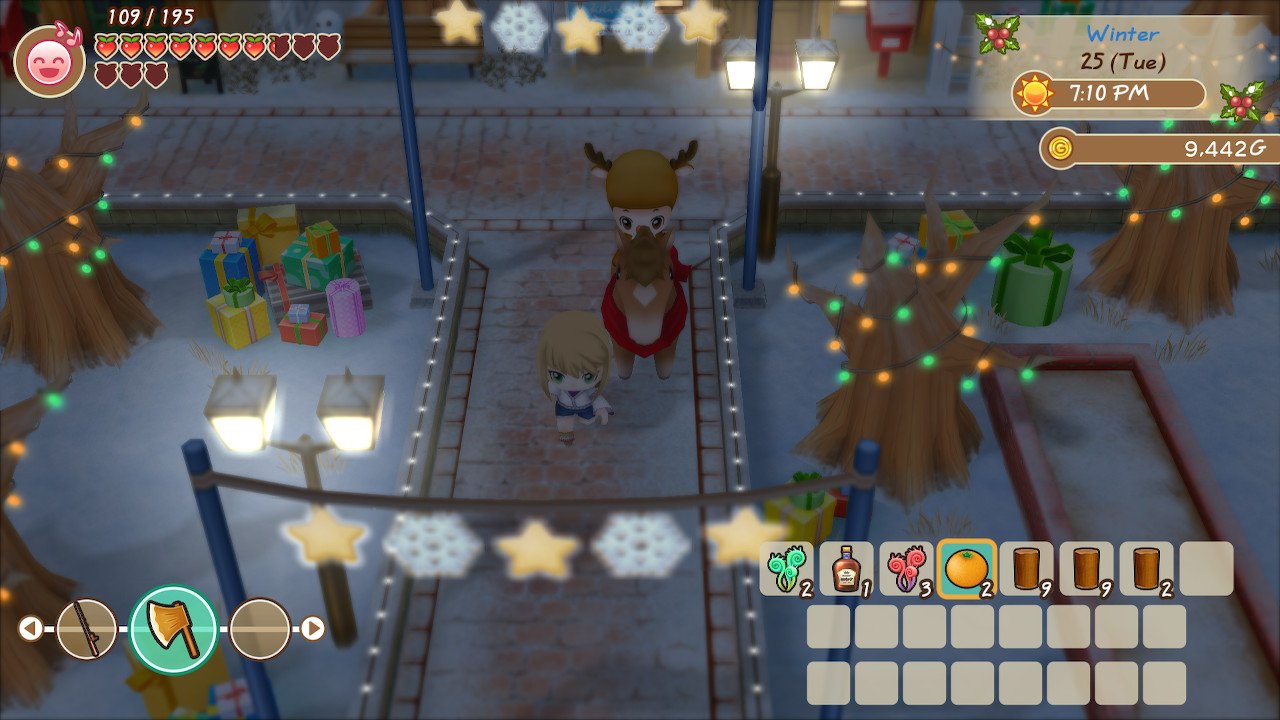 Not everything is as spectacular as it could be. The summit at Mother’s Hill is a disappointment year round and it would have been nice if the developers took a few extra steps with the designs, like giving characters umbrellas when it’s raining or dressing up the buildings for the various holidays.

Despite its age, simplicity, and lack of embellishments, Story of Seasons: Friends of Mineral Town proves the BokujÅ Monogatari franchise has been on the money since the very beginning. Its content may feel a little sparse compared to its successors and competitors, but I can see myself returning to these lands long after the next harvest moon.