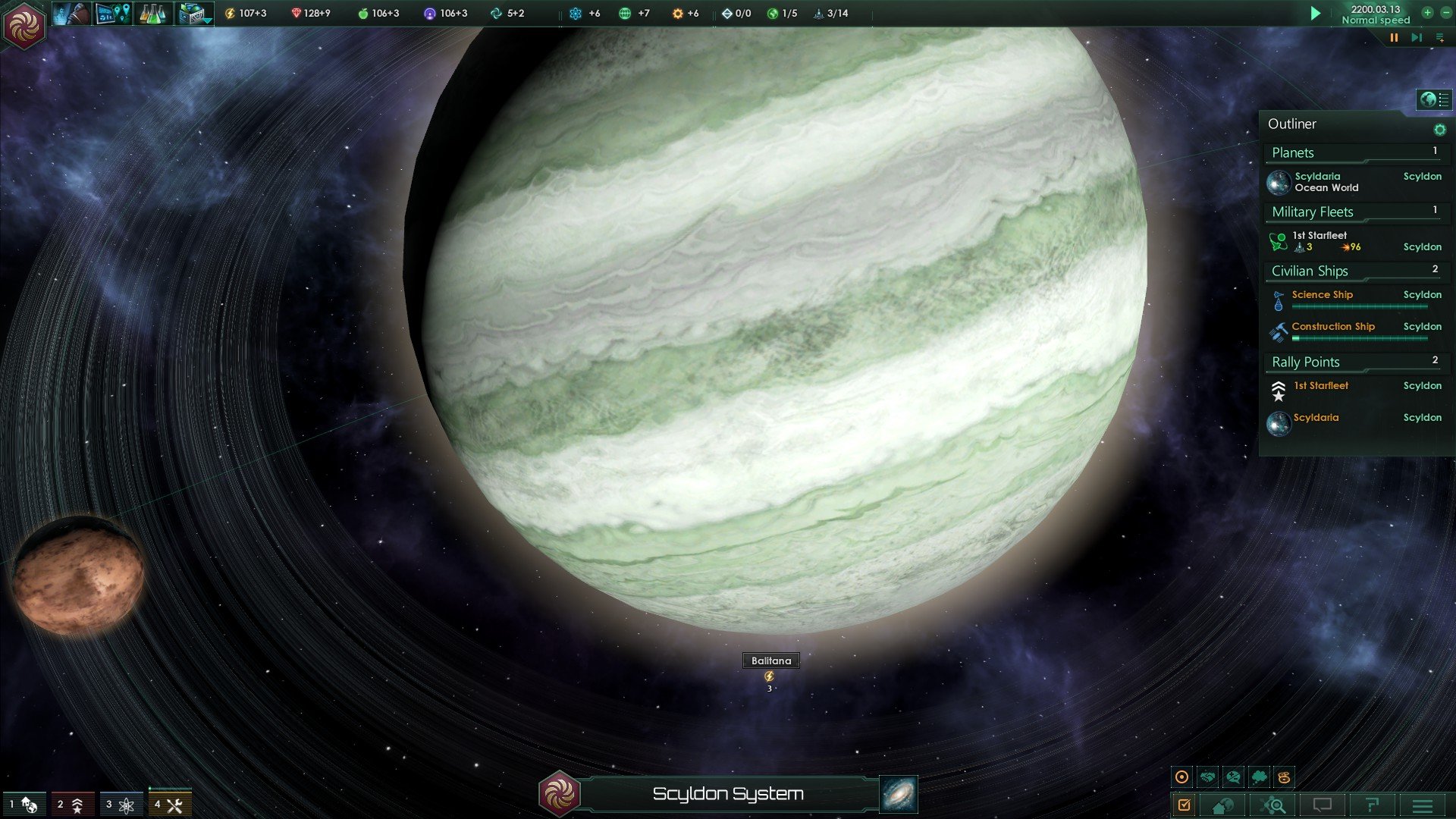 They said I could grow up to be anything I wanted.

So I became a robot.

To say my Federation-friends were alarmed might be an understatement, but with the threat of space fascism out there, there is more to worry about than a species of cuddly Fennec foxes morphing themselves into heartless machines with nigh-unstoppable battleships… right? 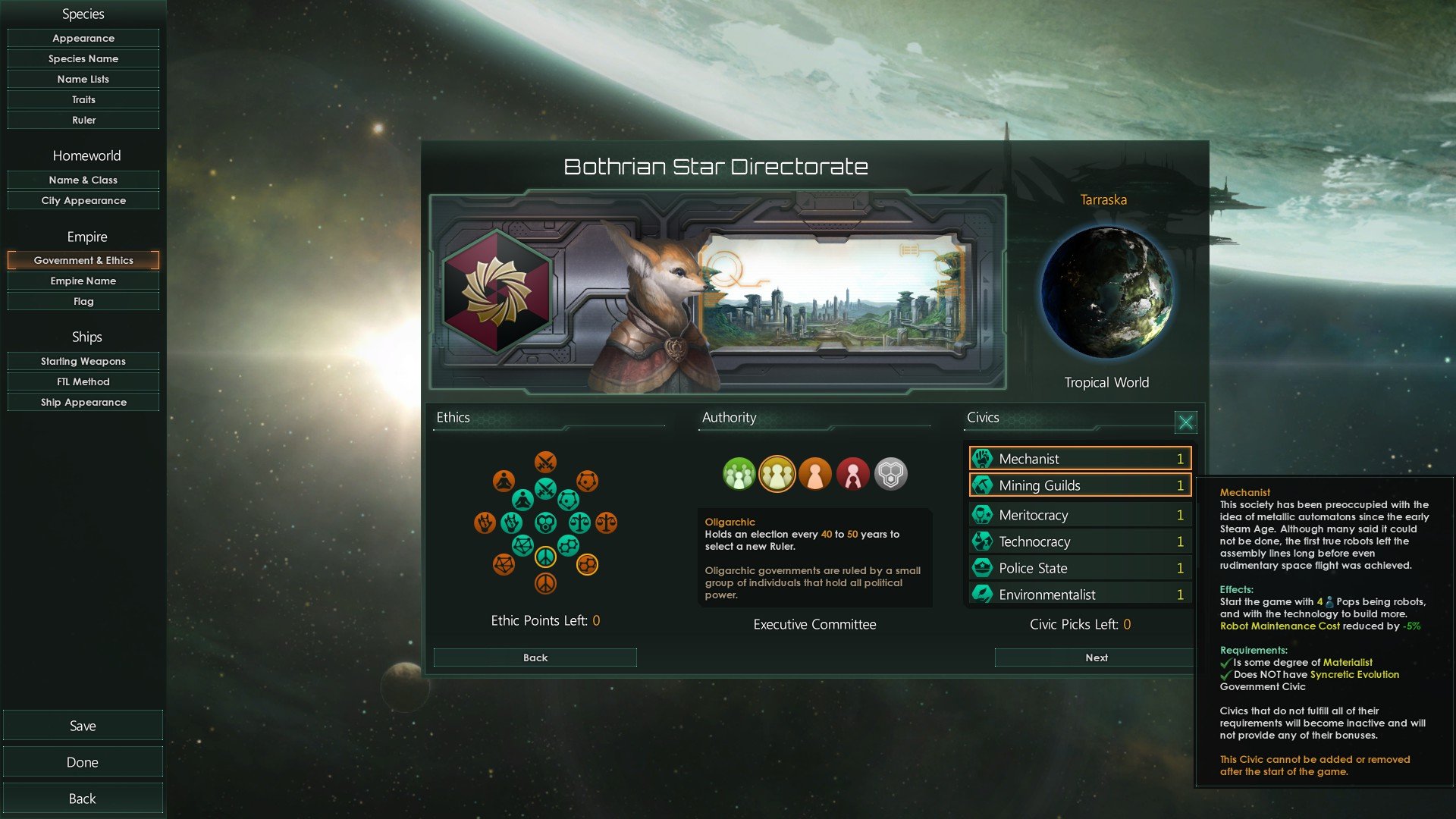 Stellaris is a year old, and in that time, even a newcomer like myself has played thousands or millions of years of time, watching empires take shape and crumble, creating stories from the ashes. Unlike other Paradox titles like Crusader Kings II, Stellaris doesn’t have human history to work off of; the tales that the genre are known for creating are thus a byproduct of the race you create, and the actions you take with them. Utopia, on top of the free 1.5 “Banks” update, revamps a large portion of the game’s creation and internal political systems, breathing life and personality into what was before a plodding mid-game.

Upon creating a race, you’ll pick an authority level, ethics, and civics. Authority levels determine your basic government type; do you want an imperial lineage, a democracy, or something between the two? Ethics, replacing the individualist/collectivist spectrum of old, is now an authoritarian/egalitarian scale, giving you points to spend on shaping the viewpoints of your people. Civics are small bonuses like extra resource gain or more tech options, but in combination with specific ethics, you can take special civics like Fanatic Purifier, letting you create your very own xenocidal Imperium of Man or Terran Dominion.

My robots-to-be, the Bothrians, were a pacifistic people, but were also fanatic materialists, giving them bonuses to science, administration, and diplomacy, but in turn restricting my behavior towards A.I. and wars. For civics, I made them industrious miners for an early-game boost, but, in line with their robophilia, they also got Machinist, which started me out with some rudimentary robotic technology. Already my goal was taking shape.

Factions a rebellious pain in your side? No more! Now factions are a natural evolution of your populace, complete with leaders, and their happiness is rewarded by Influence (a resource that allows the hiring of more leaders, and the enacting of bonuses), and penalized with unrest and rebellion.

My starting group was a bunch of transhumanist (transvulpine?) science fanatics called the Committee of Technocratic Reform, espousing technological discovery at all costs, and being friends with robots. Gradually, I was joined by other factions, like the capricious Liberty Now Initiative (who are unhappy if other factions are in power), and the Military Officers Association – who just plain don’t like me, despite my copious battleship collection.

These new groups are heavily influenced by expanded policies for your civilization. Want to bar foreigners from your core planets? Go right ahead! Those with slaves, or just desiring a little less equality in their rigid caste system, can set rights and privileges for each species in their empire. Balancing the wants and needs of your factions with the needs that arise during the course of the game desperately helps out Stellaris‘ previously-weak midgame. Finally, you have more to do than just start wars to pass the time.

Does this seem like a lot of new stuff to manage? It doesn’t end there, because you still have Traditions, and its associated resource, Unity, to deal with. Far from a bad thing, Unity allows you to unlock one of several Traditions, each focusing on a different aspect of the game, from research to expansion to war. Should you have the base game, each of these (admittedly Civ V-like) trees give a healthy bonus to their respective fields, but the real magic happens if you have Utopia. 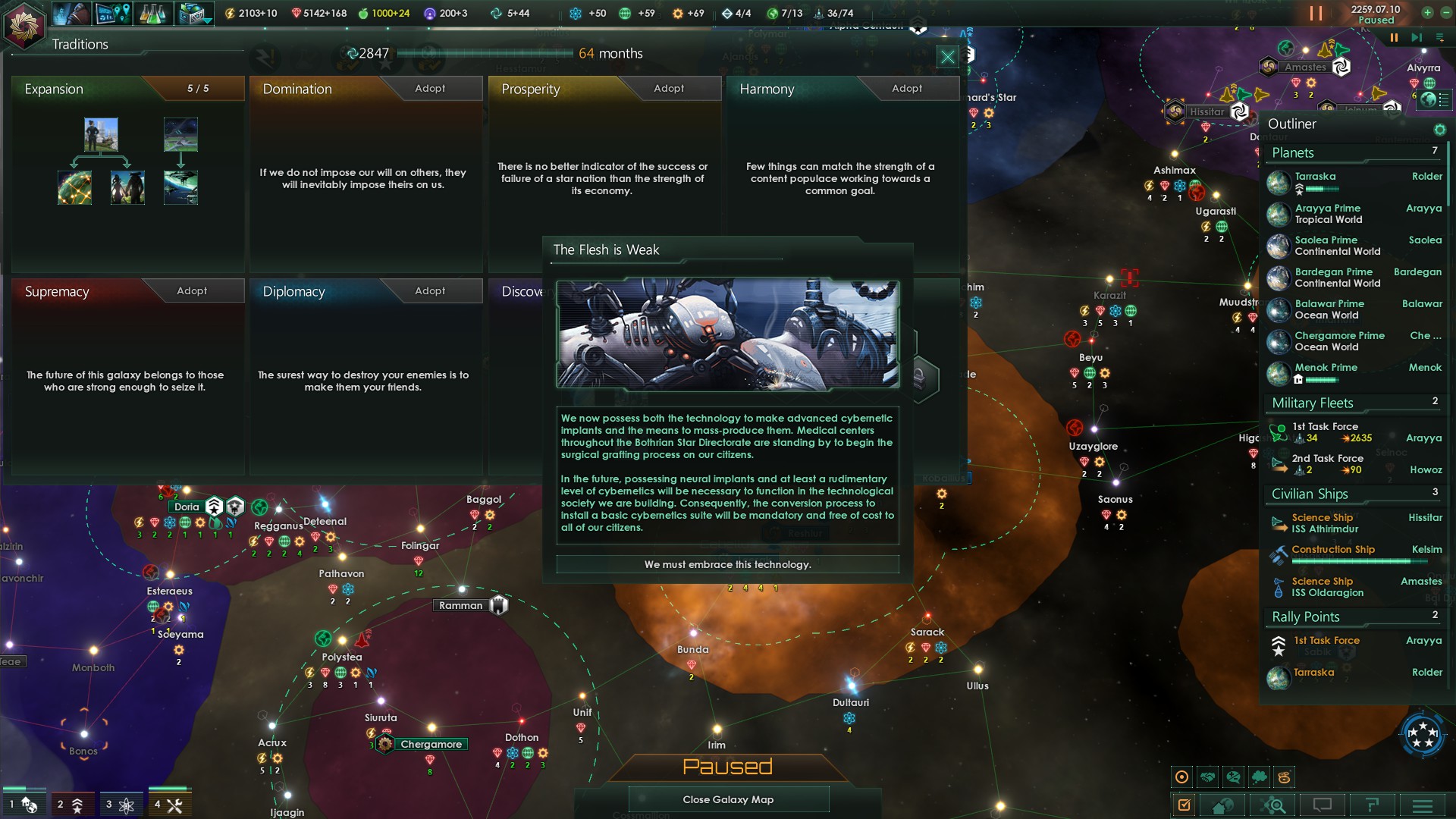 Completing a tree allows you to pick an Ascension perk, and they’re as cool as they sound. Early-game, they’re powerful but generic, like super-fast terraforming or a big boost to your research speed. Once you get further into the game, the perks start to specialize. The options that let me turn my people into cyborgs, and then robots? They came from Ascension perks. Maybe instead you go the biological path, and give your race more evolution points than they know what to do with, or tap into The Shroud, an omnipotent psionic force.

While I haven’t gotten to play around with them much, the most visually-impressive perks are megastructures. Based around popular sci-fi concepts, these include space habitats – space-based population centers and the first real option for players who lose out in the territory race – super radar arrays, and the massive Dyson Sphere and Ringworld. The former chokes the life from a sun to provide you with frankly ridiculous levels of energy, while the latter replaces all of the planets in a system with the equivalent of four max-level planets. Finally, you can recreate that one episode of Star Trek, or build your very own Covenant.

For all of the love I shower upon Utopia, it doesn’t quite live up to the name. Traditions are a wonderful addition, but in order to gain all of the Ascension perks, you are eventually forced to fill out the trees that just don’t matter to you. My fox-people are (remarkably warlike) pacifists, unable to declare war. What am I going to do with a bunch of bonuses to empires I have subjected to my rule? What is a ravenous hive-mind going to do with the Diplomacy tree, when it can’t even talk to other species?

Another is that those looking for anything related to war are strictly out of luck – given how Paradox operates, that’ll be its own, separate DLC. Considering that combat in Stellaris isn’t the strongest to begin with, this does remain a weak spot in the title. There are civics that increase the strength or efficiency of your armies, but in my experience, quality rarely matters to a great degree in invasions – quantity trumps quality here. 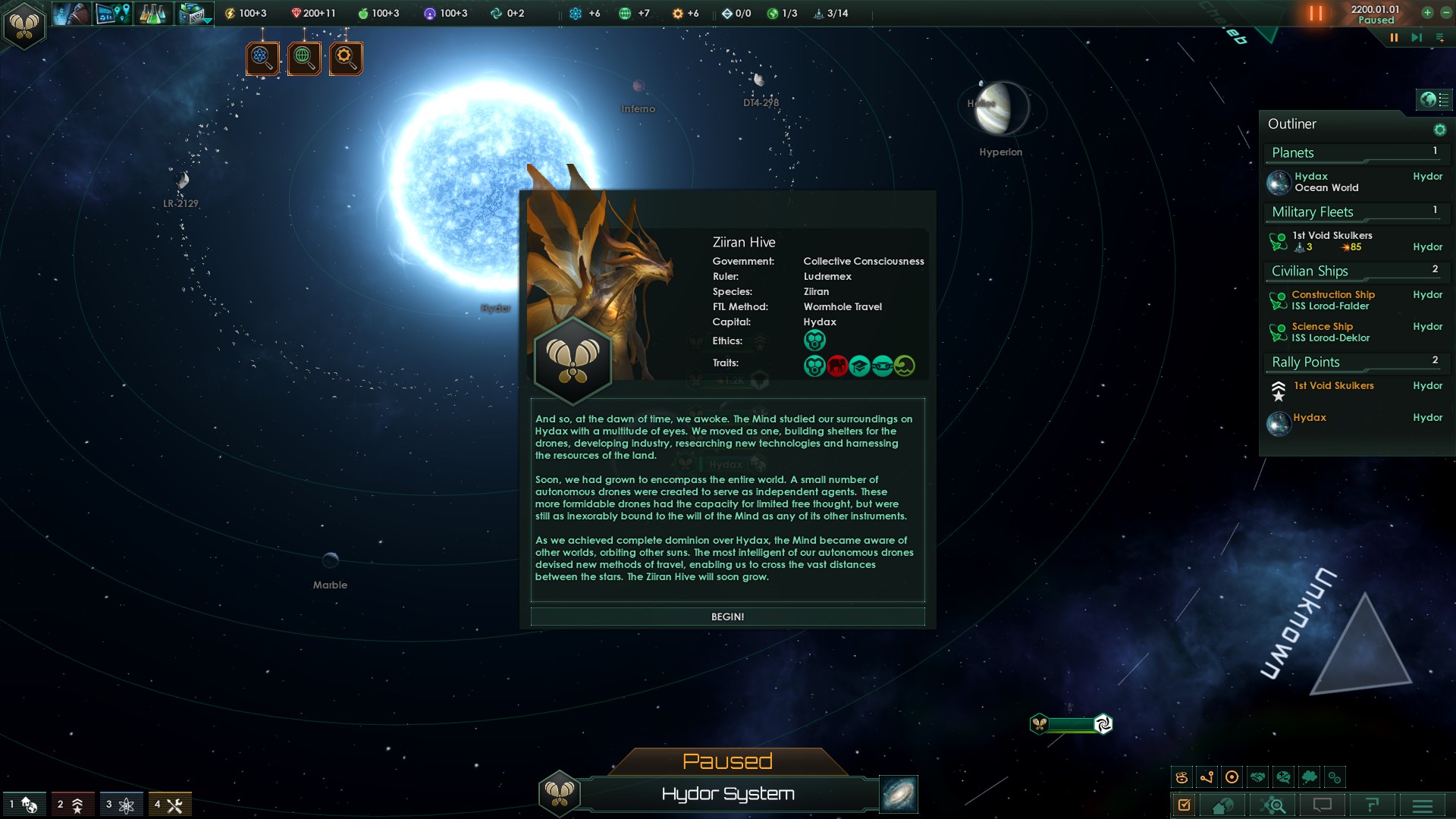 Hive minds are a major feature of the title, and with good reason. Creatures like The Borg, The Zerg, and The Tyranids are notorious sci-fi villains, and who wouldn’t want to replicate them in-game? And yet… I just don’t know how I feel about them at this point. When you pick the Hive mind Ethic, it will be the only one you choose. They are ruled by an omnipresent, immortal ruler; they get large in-game bonuses; and they don’t have factions or happiness. Furthermore, all races that join your empire that aren’t also from a hive mind will die, and any of your people that leave will likewise perish – you even have the option of a civic that turns off diplomacy and lets you eat captured enemies.

Thus lies the paradox. Hive minds are an interesting addition to the game, and an archetype venerable to the genre; but they exist by turning off the vast majority of Utopia‘s new features. It’s an interesting concept, but I’m not sure it’s one that was ready for release.

Stellaris: Utopia fills out a game that was already bursting. In the time I’ve had with it, I’ve played planet-devouring swarms, robotic foxes, militant birdmen, and slaving psionic jellyfish… things. While combat remains a sticking point, and hive minds feel like they have a ways to go before the idea is fully-formed, there is more potential than ever to do what the title does best – tell a story.