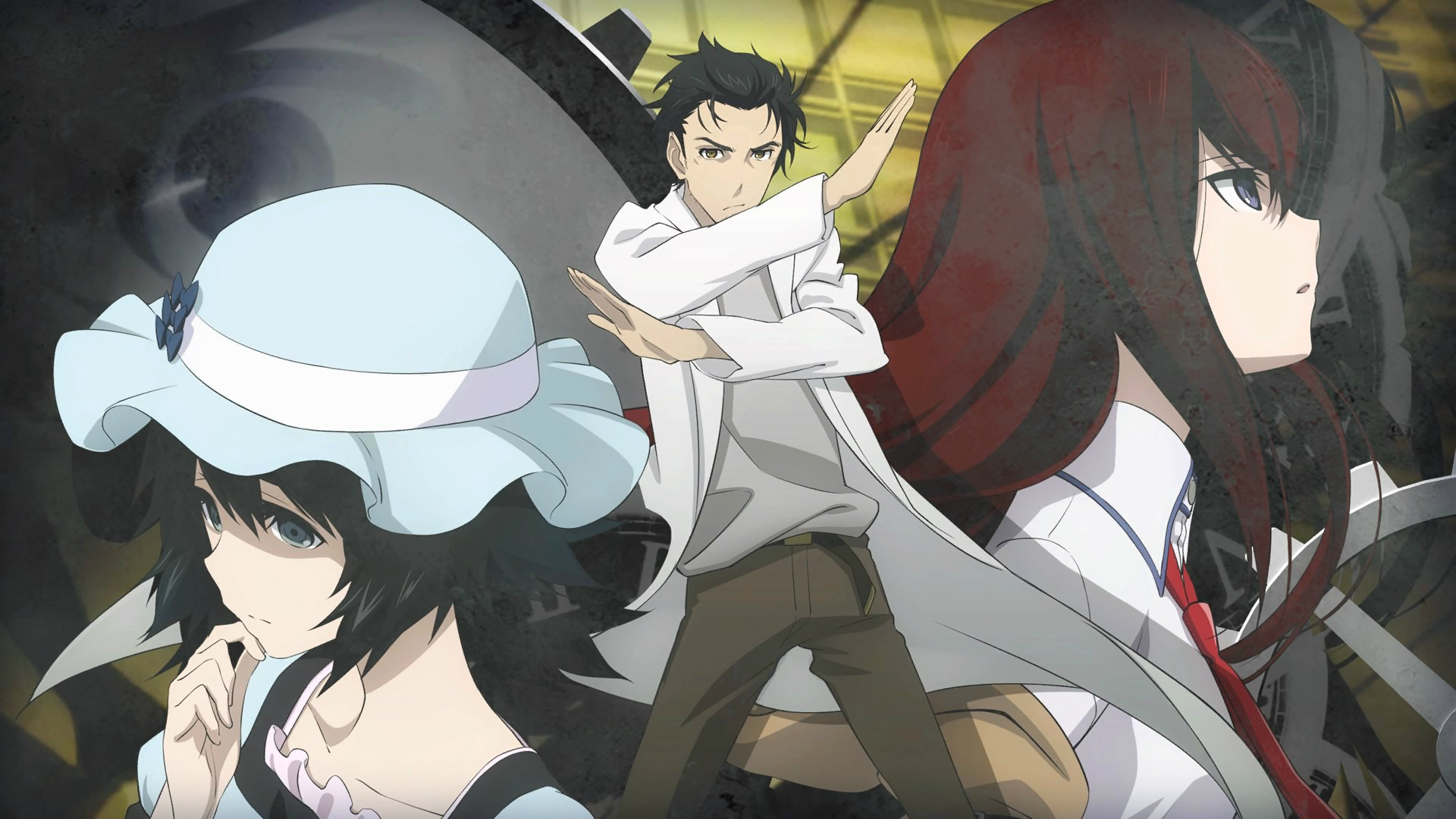 Steins;Gate Elite is a remake of the original visual novel featuring artwork from the anime as well as a few other streamlined features. There’s some give and take with what this new version offers, but it’s largely the same classic experience that it’s always been.

Okabe Rintaro fancies himself to be a “mad scientist” and often talks about thwarting the plans of a massive sinister force that he refers to as The Organization. He is a completely self-absorbed dork who pretends to have conversations with an empty dial tone on his phone, and it almost always gets a laugh out of me when he spouts his ridiculous conspiracy theories, complete with absurd code names that don’t actually mean anything outside of vague references to Norse mythology.

With the help of his misfit group of lab members, he accidentally discovers a way to travel into the past. Sending a physical person through time raises a ton of questions about possible complications, but this starts off with the premise of sending something much more believable: data.

This all comes to be due to the simple act of connecting a cellphone to an industrial microwave. What starts out as a harmless means of remotely heating up food, so it’ll be ready when he arrives back at the lab, turns into a total clusterfuck of hopping across timelines and trying to work his way towards a future where everything turns out all right. This probably sounds completely ridiculous, and you wouldn’t be wrong to assume so, but there’s more going on here than it first appears. Almost every facet of the setup, and why it works, is covered in an insane amount of detail in later chapters.

This is a story about time travel and the consequences of altering the past. Unlike the majority of media tackling the topic, Steins;Gate makes a legitimate attempt at explaining the science behind it. It dives into all sorts of theoretical physics and incorporates many real-life scientific theories as well. Most of the story can be followed without any prior knowledge of the subject matter, but luckily, it also includes a handy in-game glossary that breaks things down in layman’s terms.

However, the science is only one half of the equation here. It also heavily references otaku culture and the internet slang that has popped up around it. Similarly, the glossary is a godsend for the uninitiated. Any time a highlighted word pops up on the screen, you can simply bring up the menu and read a brief description regarding the topic. In most games, the act of constantly sending you into the menu is awful, but this is a visual novel. The majority of the experience consists of reading, so it feels fairly natural, and there’s a good chance you’ll actually learn a thing or two in the process.

This may all sound positively daunting at first glance, but the characters and dialogue make it feel incredibly easy to immerse yourself in. It helps that it’s also frequently hilarious, despite tackling some extremely dark subject matter. Even in this new form, Steins;Gate is not for the faint of heart. Depending on the choices you make throughout, it features some scenes that are both disgusting and heartbreaking in equal measure. It really incentivizes you to reach that true ending.

Elite uses the same phone system as the original, albeit with a completely overhauled presentation. Instead of players relying on themselves to whip out their phones at key points, the game will automatically bring it up when a new message arrives. You’ll choose which responses to give for minor conversations during early chapters, but major pivot points feature a new scene where you’ll either choose to send or not send a message to the past. The screen starts swirling and everything, so it’s almost impossible to miss.

The little email exchanges still matter in regards to the true ending, and the flags are all still pretty much the same as the original as far as I can tell, but the big showdowns where you’ll decide to send or not send a message are what signal that you have the possibility to reach an alternative ending this time around. These “bad endings” are totally worth watching for the full impact, and you’ll likely reach some naturally regardless, but the true ending is absolutely not to be missed. Until you get there, you haven’t finished.

If you’ve never played a visual novel, especially if your only experience with this series is the anime, Elite is the perfect entry point into the genre. This features fully-animated cutscenes, and they actually work really well. You’ll have the options to either progress through dialogue with button presses, where the images on-screen will often cycle through a subtle GIF-like animation, or enabling the Auto Mode which keeps the narrative moving forward without any input from players. It’s a happy medium between the two approaches.

As someone who considers the original VN to be a masterpiece of storytelling, despite its more cryptic nature, this was a great excuse to revisit one of my favorite science-fiction stories of all time. However, scenes don’t always line up quite as perfectly and the artwork in general is a significant downgrade from the original release. The kinetic nature of the borrowed visuals from the anime make up for that largely, but it doesn’t feel quite as pitch perfect. It’s such a small thing, but it genuinely does make a slight difference.

Still, Steins;Gate is Steins;Gate, and with the exception of a few small scenes that were cut, this is pretty much the exact same story. Okabe’s inner monologues are back, Daru is as perverted as ever, and it’ll breed an unquenchable thirst for cat girls and Dr. Pepper in equal measure. The first half of the game is still almost all exposition, but it leads into, and intricately foreshadows, the heart-stopping events that take place afterward. It was an absolute joy getting to know these characters and the world they inhabit again.

This may not be the definitive way to experience the series, but it’s damn sure the most accessible, and it beats the hell out of the neutered anime adaptation. For new fans, this is a fantastic entry point. For returning fans, Steins;Gate Elite is a solid reason to revisit a beloved series with a fresh set of eyes. I adored every second of it.