No need to shuffle

Image & Form is on a roll. While a lot of developers would suffer from mostly sticking to the same universe for nearly a decade, the talented Swedish studio has managed to straddle multiple genres (tower defense, action, strategy) under their SteamWorld banner with aplomb.

SteamWorld Quest, a turn-based RPG with card combat, only furthers that legacy. 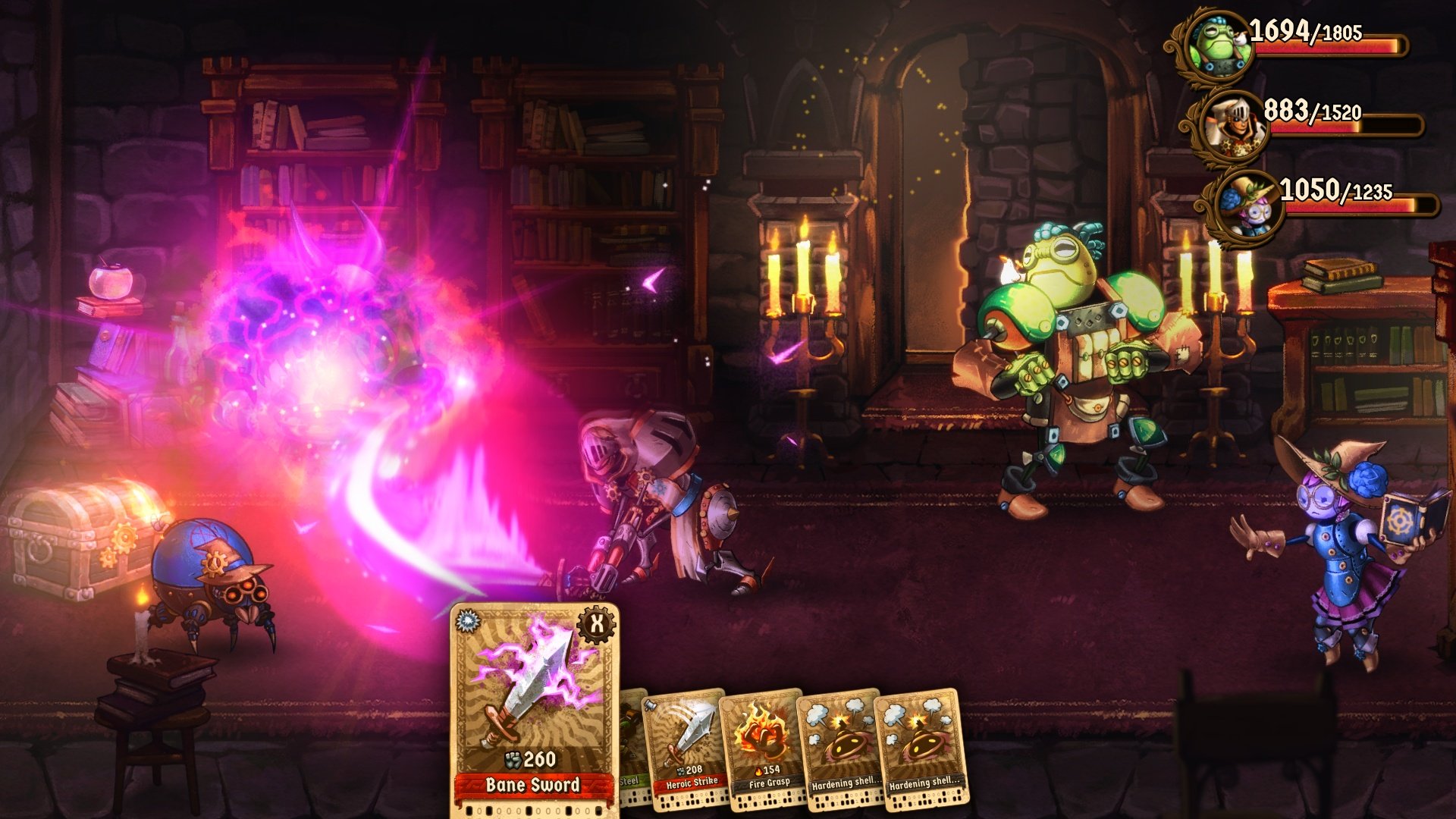 The Princess Bride “tell me a story!” conceit kind of sets the tone for this adorable as hell game: the SteamWorld universe kicks ass.

Amid positive themes and a picturesque world where everything is a robot, you get the typical irreverent PG humor you’d expect from this universe (“you son of a birch!”) which is just lovely. This time you won’t be digging in search of a motherlode, though: this is an RPG with card game bits stuffed in. Before I delve into mechanical stuff, let me reiterate once again how beautiful this game looks even in handheld mode on the Switch.

The ingenious robot designs are only augmented by the high-fantasy setting, allowing the team to get even more creative as they move outside of their steampunk/western/sci-fi comfort zones. Outside of that framework, SteamWorld Quest is very traditional. You’re going to be moving about like a dungeon crawler with light NPC interactions (mostly shops and short conversations). It’s mostly linear, level-based, and the bulk of the game is through (non-random) turn-based card battles.

How it all works is through individual party members, each of whom have their own themed decks. The “main” character is more of a damage-dealer (DPS), but there’s a caster who can opt to shield or go for elemental magic, a tank who also doubles as a healer, and a few other wildcards that can be swapped around in a max party of three. Note the shared roles, as you can lean into whatever strategy you want within the confines of each character through the game’s deckbuilding feature.

Basically, by way of a menu, you choose eight cards (abilities) that the game can randomly deal you during each turn. There’s basic cards and SP cards, the former of which can be used to build up gears to spend on jacked-up skill cards that usually have enhanced effects. You can also opt to use items in lieu of cards or redraw two (at first) specific cards per turn. Simple, right? Well if you pop up the difficulty (which I recommend if you’ve played a JRPG before), you’ll slowly realize how much each action matters.

The best part of the combat system is that the order of operations directly impacts your efficacy in battle. You can queue up three actions in any order: meaning, you can use a basic attack to power up an SP skill directly in a chain, then trigger the skill. One of my favorite early turns involved buffing up my two party members with shields, then re-drawing a full-screen kill spell to take out minions while we braved for an impending attack. 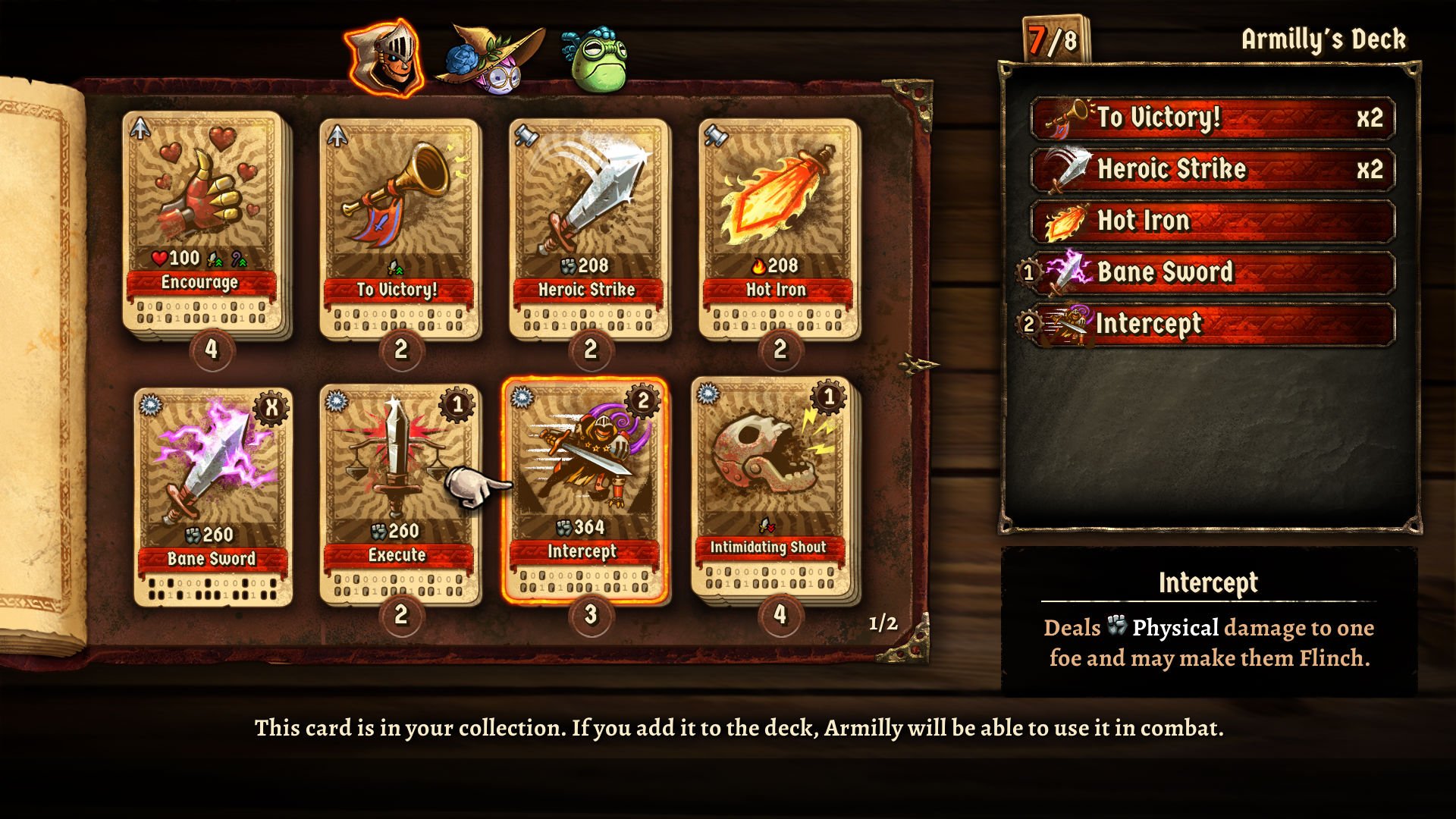 As you start to unlock more cards, the possibilities keep stacking up pretty much for the rest of SteamWorld Quest. The best part? Grinding isn’t required, especially when you factor in that you can swap difficulty settings at any time. But if you do need some extra help, you can rest at a statue, which will save and respawn enemies (sound familiar?).

So I’m pretty high on Quest as a whole, but roughly halfway in the 10-ish-hour adventure, repetition sets in. Maps aren’t as open as they should be and a familiar formula (get [x] keys to open the boss door) begins to dominate mission design. This is also the point in the story where the low enemy pool starts repeating and the AI makes poor decisions, like healing at full health instead of dealing a death blow. A lack of post-game content outside of a colosseum with multiple tiers is also a bummer.

The thing is, I would have played SteamWorld Quest for 40 hours, flaws and all. It’s brief in more ways than one but charming as hell. I hope Image & Form continues to make games and, to go one step further, never stops creating SteamWorld experiences.