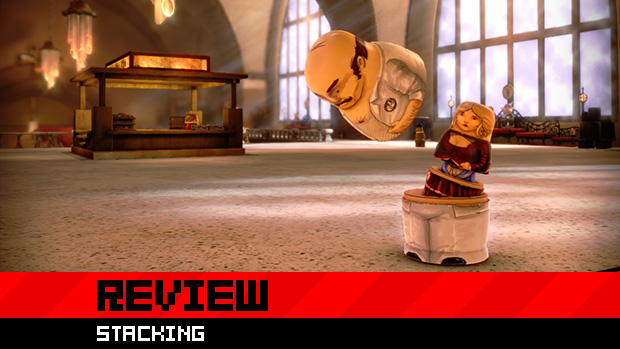 For most studios, the idea of a game where you control living Matryoshka dolls and nestle them to leverage unique abilities would sound utterly bizarre. When said game comes from Double Fine, however, the idea seems somewhat tame.

Stacking certainly is tame by many standards, being a largely non-violent game that favors brains over reflexes, telling a heartwarming tale of a family reuniting, and tossing in a few fart jokes for good measure. But it’s also fantastically creative and, like the dolls it features so prominently, has a surprising number of layers beneath its surface. 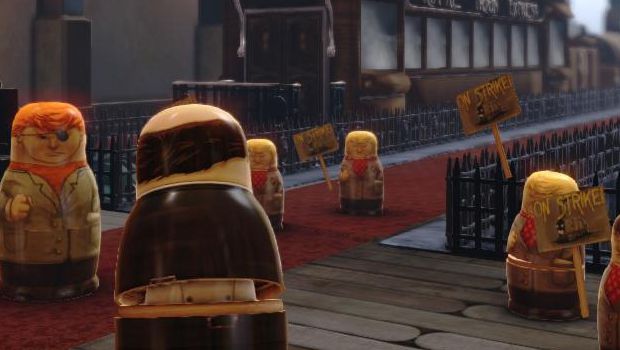 Players control little Charlie Blackmore, the smallest of the Blackmore family of chimney sweeps and possibly the smallest doll anywhere. He’s certainly the smallest in the world of Stacking, and it affords him the unique ability to climb inside the bodies of other dolls and control them. These dolls, in turn, can climb into larger dolls and so on with every doll having its own special ability. Using this ability and the gifts of the other dolls, Charlie must rescue his family from a villainous Baron obsessed with conscripting children into manual labor.

Stacking features a charming visual style that shows a world which is rightly-sized for its diminuitive wooden dwellers. A sepia filter is applied to everything, imparting a richness which befits the hundreds of years of tradition and old-world charm the Matryoska doll represents. The framerate drops a bit whenever you control just Charlie and book it at full speed, but the amount of time you spend doing that is short enough that it’s hardly a problem. Meanwhile, the score hops between classical pieces in gameplay, while the style of photoplay music is adopted to match the silent film presentation of story scenes.

A number of generic dolls populate most of the game, with additional “basic” types introduced as more of the world opens up to Charlie. Their abilities can be very useful, even essential to some puzzle solutions, but players will spend most of their time tracking down and possessing unique dolls with powers unlike any others. These can be as strange as turning people plaid, as crass as a flatulent emission, or as practical as highlighting other useful dolls. The variety is truly impressive, and the game is dotted with a number of abilities I never found purpose for aside from the entertainment value of the animations their use produced. Meanwhile, just as many wound up being helpful despite my initial thought to the contrary. 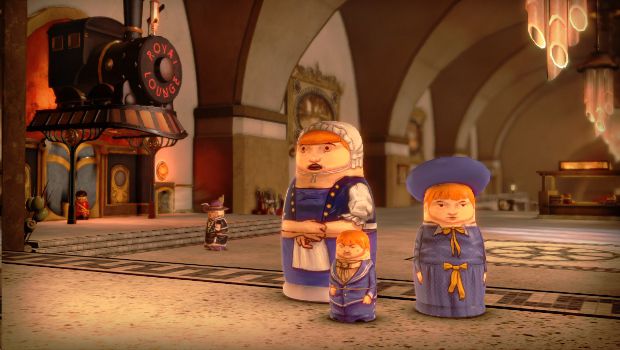 The exploration of these dolls and their abilities is one of the greatest strengths of Stacking. The actions of many dolls can be used in mini-challenges called “Hi-Jinks” that require certain actions to be performed and are rewarded by putting some bling on the doll in the form of a golden accessory. Dolls react in different ways not only to the use of abilities in their presence, but also offer different responses to you depending on which doll you use to speak to them. Dolls might be intimidated by some while completely dismissive of others. Discovering a clever interaction between to specific doll types is often surprising and fun.

A similar variety is applied to most of the game’s puzzles. There are as many as five different ways to solve each challenge, often with startlingly different approaches. While a single solution may come quickly, discovering all methods will require some creativity and careful assessment of doll abilities and the environment. Locations in the game include a train station (which serves as a hub world), a luxury zeppelin cruise, and a steamship.

Unfortunately, as the game progresses, the puzzles become a bit less varied in number of solutions and usually stick to the minimum of three. This culminates in the climax, a series of puzzles one right after another which seem to have only one correct answer each. The narrowing of options feels completely natural, provided that you have chosen to doggedly pursue the completion of the plotline. But Stacked doesn’t encourage you to do that with its emphasis on a laconic, explorative adventure style, and it’s possible to feel a bit cheated if you expect consistent breadth of possibility throughout. 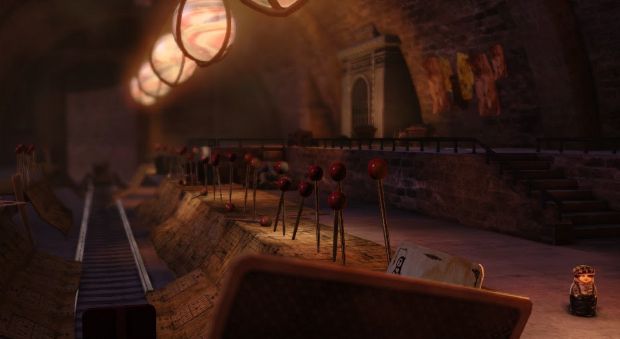 But there’s plenty to be done in Stacking even if the creativity seems to wane a bit in its latter portions. New puzzles open up in areas after you have completed the necessary tasks within them and each area has a family of dolls which offer a reward when stacked together. These, along with the aforementioned Hi-Jinks, offer a considerable amount of content to supplement the brisk two hours it takes to complete the story.

What Stacking winds up being in the end is a bright and cheerful little romp which should bring a smile to anyone who doesn’t require someone to be shot in a videogame before they have a good time. With minimal pressure and a strong focus on creative thinking, it’s an ideal game to play with someone else in the room and perfect for families to play together.