Come on baby, light my fire

There are plenty of things in Britain that aren’t strong. The pound, the economy, my intestinal lining. But one thing that remains rock solid is our apparent nostalgia for the original PlayStation console. The launch of the PS1 was the moment that Britain apparently decided it wasn’t “dorky” to play video games, thanks to trendy marketing tactics by Sony and a lot of demo pods in expensive nightclubs.

As such, games like Crash Bandicoot, PaRappa the Rapper, and other cutesy characters, that your average Terry would have balked at in ’93 as “for little kids”, were now super-cool icons for the late teen/early 20’s market. This nostalgic love runs deep even today, as exemplified by Crash’s domination of the UK Charts for not one, but two summers in a row.

Me, however, I wasn’t sold. I didn’t care much for the glut of 3D platformers that swamped the shelves in the wake of Nintendo’s Super Mario 64. I was all about the punching and the giant spiders and the powerbombs. So, it’s with a bit of sigh that I received my review code for Activision’s Spyro Reignited Trilogy, which compiles three dragon-y adventures from the later years of the PS1. I played the original game way back when, but that has become a fog with time. Y’see, I don’t particularly care for the genre, or the characters, or the starry-eyed nostalgia surrounding Spyro’s brand.

But the smug little bastard put me in my place, that’s for true. 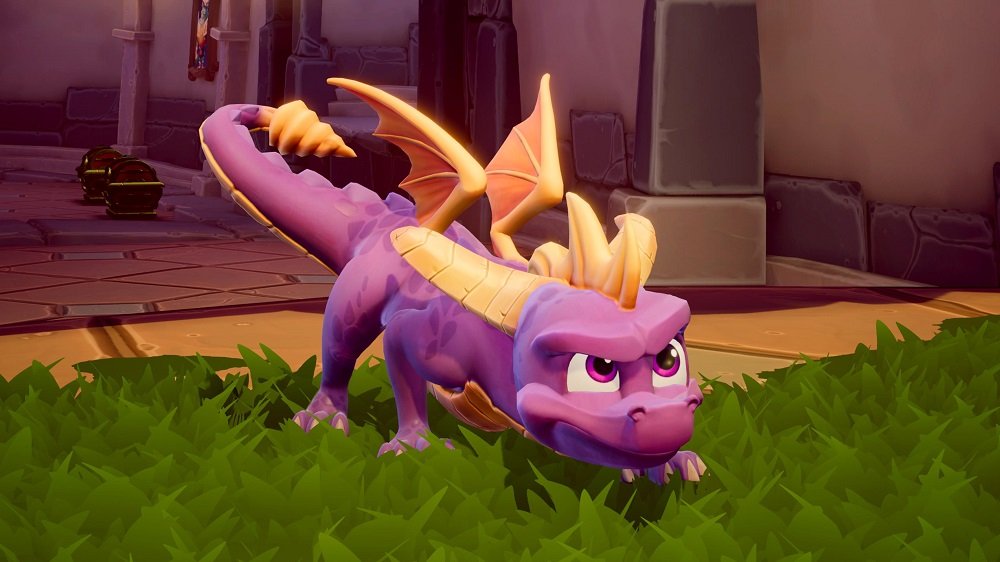 Activision’s Spyro Reignited Trilogy takes three of the titular dragon’s classic PS1 adventures and bundles them together in one easy-to-swallow, lengthy-to-download package. Reignited features 1998’s Spyro the Dragon, 1999’s Spyro 2: Ripto’s Rage and 2000’s Spyro: Year of the Dragon. Developed from the ground-up by Toys for Bob, Reignited hopes to please Spyro’s dedicated fans, while giving those who missed out previously an opportunity to experience the ’90s adventures with new aesthetics befitting a modern era of gaming.

And what a job they have done in that particular department. Reignited, more that just an upgrade, is a stunning re-imagining of Spyro’s universe. Despite being recreated faithfully in a dimensional sense, every world has been beautifully realised, bursting with luscious colours, strong lighting effects, and with meticulous attention paid to the animation of every single character.

“Character” is the optimal word here, as every creature, friend or foe, is brimming with life in their movement, idle animation, death animation, facial expressions and physical behaviour. The cast of Reignited are depicted with such care that they instill a genuine sense of personality. Every dragon rescued in the original Spyro is a joy to behold, selling their respective attitudes in fun design. smooth animation and a few scant lines of dialogue. The terrain itself – from wide-open fields and dusty valleys, to deep blue oceans and red-skied lava pits – are universally gorgeous. Through strong colours, smart effects and fluid movement, Toys for Bob hasn’t just upgraded Spyro’s universe, it has imbued it with heart to create a (fire) breathing world of fun characters.

One thing I certainly wasn’t expecting was to get such a kick out of the soundtrack. Blending upbeat, happy-go-lucky tunes with bizarre, almost prog-rock use of bass and organs, the Spyro soundtracks have been re-recorded afresh to match Reignited’s visual facelift. They sound similarly fantastic, save for some odd looping. Dynamic music adds and removes beats dependent on whether yer boy Spyro is standing still, wandering, gliding or dashing, which lends a nice cinematic touch to the action.

For purists, the original soundtrack can be restored via the pause menu, in case you’re looking for that Pavlovian link to your memories. Voice work is solid, although I’ve never really “bought” Spyro’s voice, I don’t think it fits him. Much hilarity was also found in the bizarre gamut of accents in Year of the Dragon, Is that supposed to German? South African? Italian? There’s a lot of flyer miles going on with some of YOTD’s characters.

Speaking of sound, it would be remiss for me not to address the weird omission of subtitles during cut-scenes. This was an issue also raised with the Crash Bandicoot: N. Sane Trilogy. Despite Activision’s terrible attempts to excuse the situation, there’s simply no reason not to include subtitles in a video game in 2018. There’s zero point in the publisher trying to explain it away. Here’s hoping for a possible update in the future, because it’s a baffling design decision. Fortunately, subtitles do appear when speaking to in-game quest-givers. 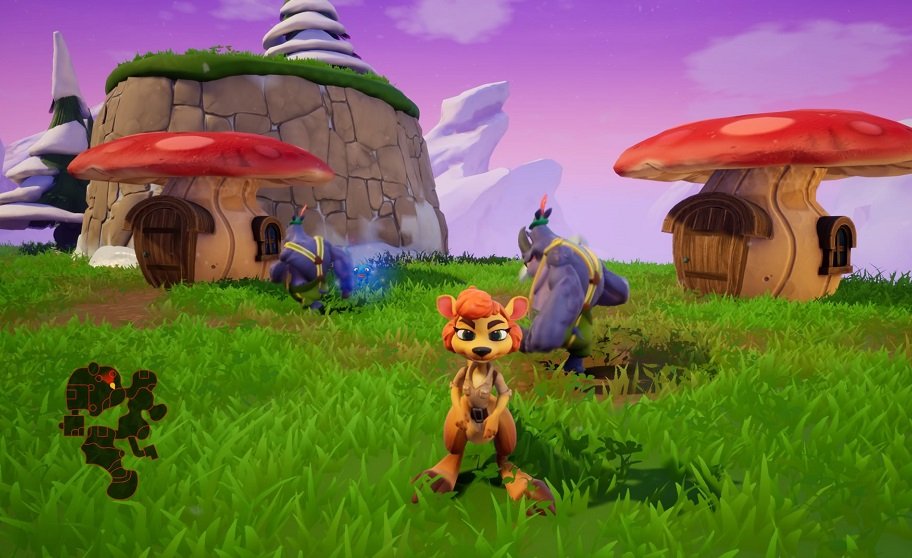 Of course, none of this aesthetic praise counts for anything if the gameplay doesn’t get your wings flapping. In this regard, Toys for Bob have chosen to play it safe. Reignited attempts to recreate its trilogy to a tee, without making any serious attempts to alter, break or fix too much from the original releases. This is a double-edged sword – a “problem” faced by many retro-remake releases – as it delivers the exact same experience that long-time fans remember, but also doesn’t shake anything up in order to catch up with video gaming advances in the interim.

As such, fans will be stoked with how immediately recognisable Reignited feels, but some newcomers may find its gameplay, particularly in the original Spyro the Dragon, simplistic and dated. Let’s face it, these games are pushing 20 years old now, and their basic “search the world and find all the gems” objectives may come across as bland in an era where we are bombarded with objectives, side-quests and other activities in our 3D adventures.

That said, It must be noted that I personally found it refreshing to play through three games where the map screen wasn’t swamped with icons. More isn’t always more. After a couple of decades of open-worlds where you can’t move for tripping over yet another quest, Reignited is almost therapeutic in its approach to activities. Year of the Dragon is the most creative, requiring Spyro – and various playable pals – to complete “mini-missions” in order to receive items needed to progress. Oh, it also has skateboarding and a “Whoa, dude!” character, because it’s the year 2000 and of course it fucking does. 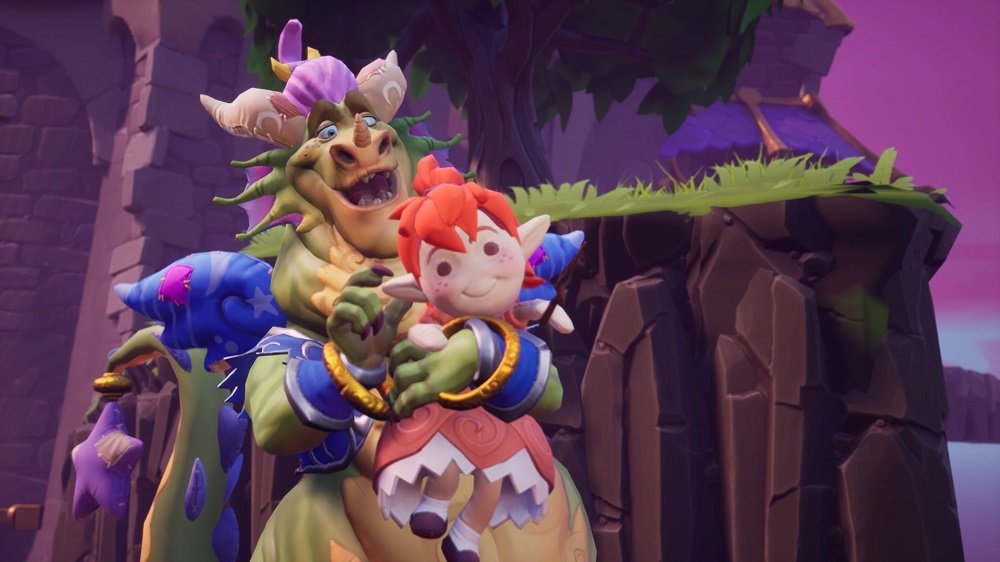 With these remakes, Toys for Bob has gone above and beyond in audio/visual upgrades, but remained withdrawn in terms of gameplay experimentation. As such, Reignited is the definitive version of the original Spyro trilogy, looking, sounding, and for sure controlling better than ever before. Aesthetically, it isn’t just an upscale, its a reinvention of Spyro, Sheila, Sgt. Byrd and their friends, enemies and universe. A reinvention that’ll leave fans squealing with delight.

By choosing to toe the line, gameplay-wise, Reignited threatens to leave some newcomers – who have been spoiled for choice with hundreds of excellent releases in the last two decades – wondering what all the fuss is about. But, as I said above, I personally found the stripped-back approach to open-world gaming not only relaxing, but refreshing. I guess everything old is new again…

Spyro Reignited Trilogy is a fan’s dream. This heartfelt remake is bursting with colour, character and adventure, even if it has been developed with an cautious approach to reinvention. Though some might find its retro-fused action a little simplistic in this convoluted era of gaming, Spyro has the ability to entertain even the most cynical player with its wonderful worlds, slick design, and ability to spark the flames of nostalgia.