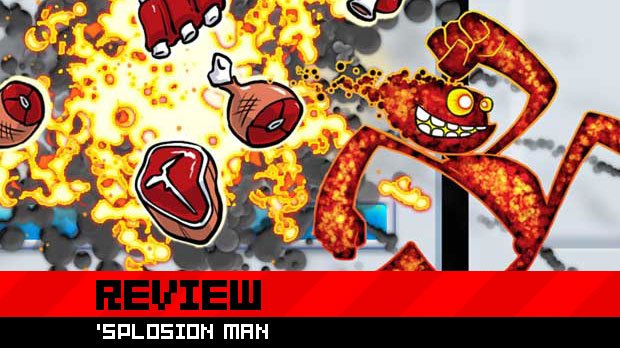 Twisted Pixel pushed its way onto the Xbox LIVE Arcade scene earlier this year with The Maw. An original title based on an original IP, we thought it was pretty damned impressive for the studio’s first effort.

Its sophomore effort, another original Xbox LIVE Arcade title called ‘Splosion Man, looks to continue the studio’s tradition of working with unique and original IP. When it was announced earlier this year, we thought it was a joke — the studio pitched it as a game about as an exploding man who does lots of exploding and explodes scientists into pieces of tasty steaks.

It had our attention, for sure. But is ‘Splosion Man, the game that kicks off Microsoft’s Summer of Arcade, any good? Hit the jump to find out, and excuse how many times we use varations of the word “explode.”

If you’ve already read our preview, go ahead and skip over the next few paragraphs, or excuse the redundancy. ’Splosion Man follows the adventure of an experiment gone wrong: a lab rat is turned into an unstable and combustible anti-hero, hell-bent on escape from a locked-down underground facility. Security, as you’d expect, is tight. And it includes lasers. Killer robots. Moving platforms that move up, down, left, and right at varying speeds.

The road to freedom won’t be easy, as ’Splosion Man’s skill set is limited to walking left and right, hanging on to platforms, and — as if you should be surprised — exploding. In fact, ’Splosion Man’s most basic controls are more or less its only controls; every one of the Xbox 360 controller’s face buttons does one thing: it makes ’Splosion Man explode.

’Splosion Man is a platforming game with no jumping per se, which isn’t an issue, as it turns out. Exploding acts as the jump here, launching ’Splosion Man in the air to reach normally unreachable heights. You can explode up to three times before cooling off, in effect giving you the ability to triple-jump. Objects like exploding barrels or jets that shoot fire are sometimes placed about the levels to allow you to reach new areas, or extend your explosion powers to complete objectives.

While the concept and gameplay behind the title is simple — anyone can pick up the controller and within a few moments “get it” — it’s the creative and sometimes unexpected level design that makes ’Splosion Man such a joy to play. While each of the game’s 50 single-player levels has a “par time” attached to it, not once did I complete the stages anywhere near the target set forth by Twisted Pixel. Stages require a mixture of quick thinking, impeccable timing, and trial and error to complete, each one more satisfying than the next.

Admittedly, there are many instances of extreme aggravation, with some areas requiring inhuman gaming reflexes and completely out-of-the-box thinking. But ’Splosion Man is rife with those near miss, skin-of-your-teeth, “I can’t believe I finally f*cking just made it” moments that make the angry outbursts and teeth-grinding more than worth it. It helps that Twisted Pixel consistently change up the playing field up until the game’s end, including an unexpected set of bosses as creative and fun to battle as the levels themselves.

’Splosion Man also features a cooperative multiplayer mode, which puts up to four ’Splosion Men into 50 unique multiplayer laboratory levels, playable both online and locally. Controls remain the same, with the hook here being that players must work together to do more than just hit switches for or with one another. (There’s plenty of that, of course.)

By timing explosions properly, ’Splosion Men can explode one another, launching one another to heights previously unreachable. Teamwork and communication is key, and Twisted Pixel even included a button that triggers a “countdown” to help players time their explosions. The multiplayer levels are just as gratifying (if not more so) than the single-player game, requiring players to put their heads together to solve puzzles, as well as engage in some intense, near-psychic levels of communication in order to nail some of the trickier timing.

Like their previous effort, The Maw, ’Splosion Man has character and polish you don’t normally see in Xbox LIVE Arcade titles… or many titles, period. While the game doesn’t feature the same kind of narrative structure as The Maw, there’s plenty of stuff here to fall in love with. You won’t soon forget the ’Splosion Man character, the excitable, flaming protagonist with a penchant for cake and open-faced roast beef sandwiches. Why? Why not? Scientists explode into rib-eye steaks when destroyed, folks — reality and sense is not one of ’Splosion Man’s strong points.

’Splosion Man is not without its issues, most of them minor enough that most players interested in puzzle platforming challenges will be able to ignore. For instance, seeing as how the game encourages players to nail par times and best their own scores, there’s no way to immediately replay a level for a better time. Once a level is complete, your options are to move on to the next or return to the game’s level select screen.

Either way, you’re subjected to the game’s next minor issue — the loading screen, a static image of ’Splosion Man that sits on a spinning background and is set to the sounds of a looping drum fill. To call it obnoxious or vomit-inducing is not an overstatement; it’s so bad, it simply has to be mentioned.

But little gripes like that shouldn’t stop you from checking out ’Splosion Man, especially at its sweet price of 800 MS Points (or ten human being dollars). For such a small, independent team, Twisted Pixel has proven that it has the chops to hang with some of the bigger studios (think Insomniac Games, even Pixar) when it comes to developing unique-looking and original titles.

’Splosion Man is without doubt one of the most polished, original, and enjoyable games on Xbox LIVE, a great way for Microsoft to kick off its “Summer of Arcade.” If you enjoy stern, sometimes unforgiving platforming challenges, you simply shouldn’t miss it.