Splinter Cell: Conviction was, in my opinion, a superb new direction for the Splinter Cell series, but a fair few fans were unhappy with the changes Ubisoft made. It’s hardly surprising then, that Splinter Cell: Blacklist pulls the classic trick of making the old seem new again, bringing Sam Fisher’s stealthy adventures closer to their roots.

However, unable to quite abandon Conviction — and the potential new fans it won — Ubisoft has also unsurprisingly sought a compromise between the new and the old. Features from Conviction have been married to Blacklist‘s more traditional design, and the result is a game that’s quite entertaining, if somewhat unsure of itself. 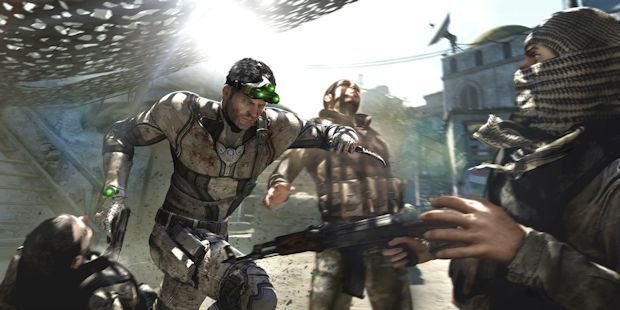 In a somewhat canned and pedestrian narrative, Blacklist‘s plot revolves around a terrorist organization planning to attack the United States of America. Sam Fisher is back — no longer voiced by Michael Ironside — to deal with a shadowy organization known as The Engineers. He’s joined by the team at 4th Echelon, including a new sidekick in Briggs, whose sole job is apparently to make things feel as much like Call of Duty as possible.

Fisher’s adventure will take him across the globe from Libya, to Iran, to Britain and the United States, but for all its globetrotting subterfuge, Blacklist‘s world feels small and isolated. As well as telling a rather mundane and predictable story culled from a thousand spy thriller movies, the plot is rather uneventful and seems unable to decide what it wants to say. That, and the ending comes off as total gibberish.

From the 4th Echelon’s Paladin spy plane of mystery, Fisher can suit up, chat with supporting characters, and undertake missions. Story stages, co-op and challenge maps, as well as the competitive multiplayer are all selected from one digital map of the world — known as the SMI — and handily labeled for your convenience. With money earned and passive challenges beatable across every mode of play, there’s a commendable attempt at blending all of Blacklist‘s gameplay offerings together into one cohesive unit. The use of one map littered with icons is a bit overly busy, but the sense of unity generally works out well.

With the ability to replay any mission and a selection of elimination, wave-based, and stealth-only challenges to choose from, heavy emphasis is placed on earning cash and powering up your perfect vision of Sam Fisher. There is a variety of outfit pieces to choose from, as well as new goggles, a respectable pool of weaponry, and wonderful gadgets including the nonlethal bow with interchangeable arrows, the remote-controlled Tri-Rotor drone, and the classic Sticky Camera.

The sense of personalization is carried over into the gameplay, with players graded on getting through levels using Ghost, Panther, or Assault tactics. Points for Ghost activity are earned by totally sneaking through a level without disturbing enemies — the toughest prospect, with the highest reward. The Panther style is closer in spirit to Conviction, with Fisher actively stalking enemies to distract, outflank, and ultimately take out of the equation. Assault play should be pretty self-explanatory, taking opponents head-on with assault rifles, grenades, and melee kills. Ubisoft’s done a laudable job of making Blacklist accessible without undermining what makes Splinter Cell enjoyable, and while Assault may seem like an attempt to make the game easier, it’s actually a lot simpler to use Panther tactics, while Ghosting a section is ultimately the most satisfying route — if it’s pulled off well!

While the flexibility is at least appreciated, the game does sometimes try and bottleneck players in a somewhat cloying contrivance of variety. As well as areas where sneaking by totally undetected is mandatory, there are also some overhead missile strike sections and even a first-person shooting stage, with any solo missions involving Briggs designed to look and sound like those military shooters the kids love so damn much. 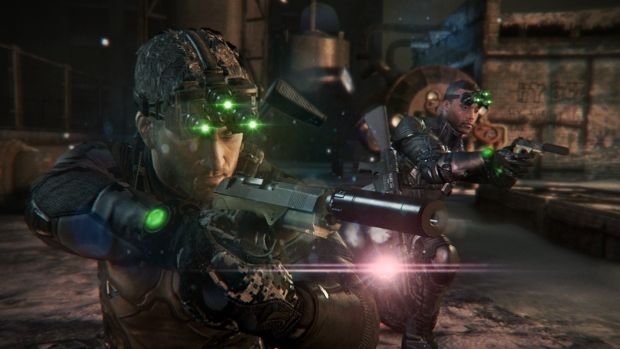 In its attempt to bring more of Conviction into the Splinter Cell basics, Blacklist preserves the “Mark and Execute” ability, where you can use an Execute gauge to select and automatically take out targets in range. The “Last Known Position” feature also returns, with a ghostly outline showing players where enemies think Sam Fisher is. Interrogations are back, but are not as interactive as last time, with the “Spare or Kill” choices punctuating enemy encounters coming off as fairly meaningless and cynical.

These features were designed for a different kind of stealth game, and don’t always work so well in Blacklist. Levels don’t feel designed with Mark & Execute or Last Known Position in mind, and they don’t feel as useful as they did last time. Sometimes the predatory stealth fails, with enemies randomly spotting Sam as he lies in wait for an ambush, and A.I. in general fairly finicky on whether it can see players or not. Ultimately, the Conviction elements seem thrown in for their own sake, and offer no real value to the game.

This may be good news for fans of Chaos Theory, however, as Blacklist does boast some great level design, plenty of gadgets to play with, and the welcome return of night vision, which can be upgraded to full-on Predator-Robocop vision. Setting up traps, luring guards with noisemakers, and using pipes, ducts, and ledges to worm one’s way around the environment make for some undeniable fun, though it can be jarring for stealthy players to suddenly find themselves in the cover-based shootouts and other action sequences sometimes tossed into the mix without warning. 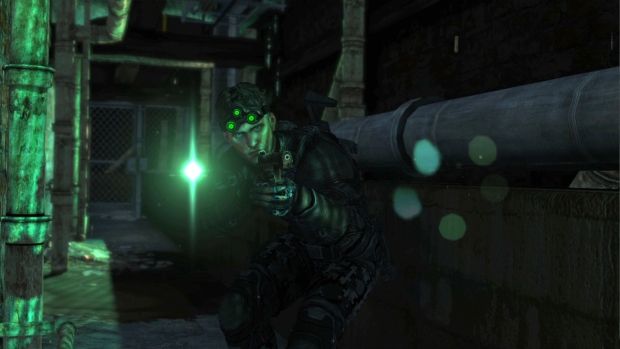 One other issue with the game is how easy it is to earn cash. While there’s a lot to spend the money on, it’s given out so readily that you’ll have upgraded the Paladin and gotten access to your favorite inventory items after a handful of missions. I obtained the exact loadout I wanted with hours left on the clock, and felt no further incentive beyond that. Too much cash, and not enough to spend it on, somewhat tarnishes what is otherwise a fun idea.

To be quite fair, the story-based campaign missions aren’t all that enjoyable, suffering from a plodding pace and writing that’s simply too cliched to be interesting. The situations Sam finds himself in are all fairly played out in the stealth genre already, and do very little to make themselves more exciting. The challenge maps are far more interesting, and surprisingly, it’s the co-op (either local or online) that manages to make the experience more engaging. Playing through missions with a partner adds a sense of dynamism to the gameplay that the sterile and predictable solo mode sorely needs, and while it can often be more difficult to sneak through the environment as a two-person unit, it’s altogether far more rewarding to pull off. 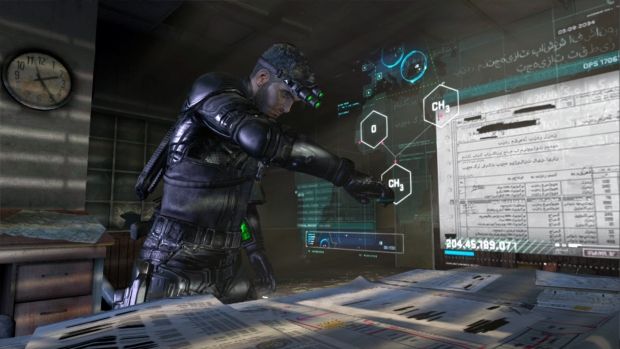 Online multiplayer is also a highlight, and while it may sadden Fisher fans to hear that, it must be said that Spies vs. Mercs is notably superior to the campaign. Once again, teams of players take turns as stealthy spies and action-oriented mercenaries, with the former attempting to hide from the latter and complete objectives without being found and blasted.

The “Classic” mode is everything you could want — two quick-witted spies pitting their non-lethal gadgets against slower, first-person shooting, lethal mercs. A new “Blacklist” mode further evolves the idea, however, with custom loadouts and four-on-four matches with a variety of game types. Using the money earned in all areas of the game, players can buy all manner of gadgets and weapons for their Spy and Merc, just like do with Fisher. Many of the tools are designed to counter the opposing team, such a mask for the Spy that can Counter the Merc’s gas grenade, or a disruption field that Mercs can employ to jam Spy gadgets. 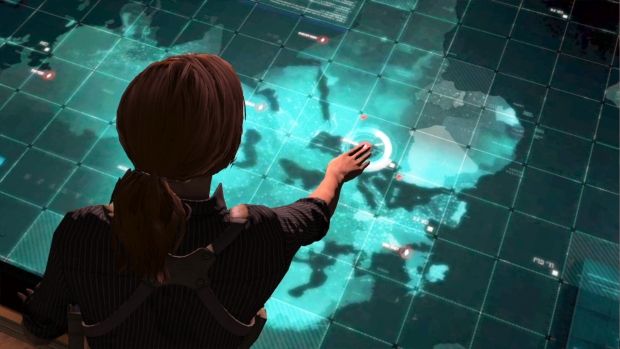 Spies vs. Mercs is where the real heart of Blacklist lies. It’s more action-oriented and quicker paced than previous iterations, while the ability to customize means players can find their own unique style within the two fundamental classes. Sometimes the balance can be a bit off — Spies in particular get big advantages over Mercs with the right tools — but the overwhelming sense of paranoia involved makes the larger scale multiplayer more amusing than ever.

It’s a shame, then, that Blacklist‘s visuals are pretty unimpressive, bordering on ugly. Cutscenes feature screen tearing while environments are marred by muddy textures. Animations are twitchy and most of the effects, be they lighting, explosions, or fire, are all fairly outdated. Loading times are also egregiously lengthy, making the poor visual quality all the more confusing. Sound design is fairly bland too, with droning music and voice acting that lacks any sort of verve — especially the new and unremarkable Fisher. That said, whoever voices the main villain does a bang-up job! 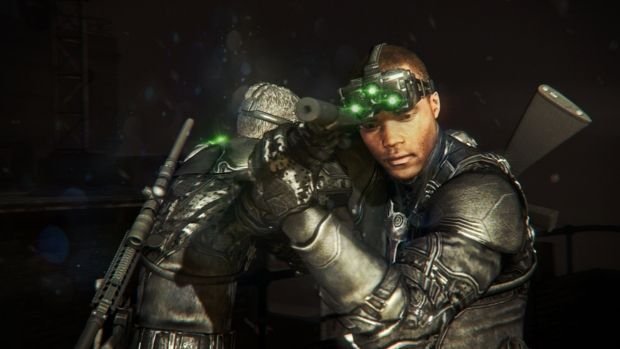 As with so many recent Ubisoft releases, how much you enjoy Splinter Cell: Blacklist depends on how willing you are to enjoy every feature it crams into the overall package. The campaign itself is fairly middling, and can be blazed through in the usual eight-to-ten hour timeframe, but if you talk to your supporting characters and access the ton of extra mission content, you can double the bang for your buck. With Spies vs. Mercs getting so much attention, you’ll want to indulge in some multiplayer too if you really want to get the most out of what’s on offer.

The good news is, if you’re up for some cooperative stealth and mercenary antics, Splinter Cell: Blacklist is right up your alley. If all you desire is more Sam Fisher action, however, you may come away feeling a little shortchanged.