Splatterhouse has never really been a great franchise, but it earned its cult following thanks to obscene content, disturbing creature designs, and a Lovecraft-inspired aesthetic. Your humble reviewer is one of those followers, so the announcement of a Splatterhouse remake was very exciting indeed.

Troubled development and a long wait have dampened the spirits of fans, but the time has finally arrived. For better or worse, Splatterhouse is back, and if nothing else, it’s splattier than ever. 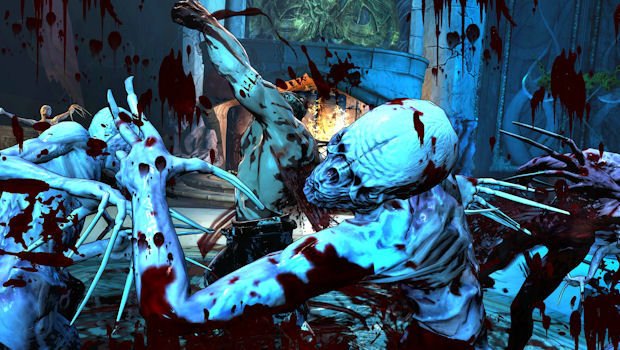 Splatterhouse is a full-on reboot of the original series, taking us right back to the moment in which protagonist Rick Taylor meets his mysterious and deadly ally, the Terror Mask. Bleeding from a massive hole in his gut on the floor of a mansion, Rick’s girlfriend Jennifer has been kidnapped by the nefarious Dr. West. He is rescued from certain death when he puts on the Mask, which just so happens to be alive and capable of turning him into a gigantic, musclebound freak. Gore ensues.

If you’ve played the original Splatterhouse, you’ll most likely be surprised by just how faithful this game attempts to be. Rather than try to do anything too special and new, Namco has instead created a game that feels inherently retro despite its predominantly 3D graphics. This is a classic minded brawler at heart, and a damn hard one too.

Enemies are not only aggressive, they are more than capable of dealing huge amounts of damage. There are regular opponents in this game that can slice Rick to ribbons in three slashes. It’s actually pretty damn fun once you get used to it, even if it causes much swearing at the television. Enemies don’t rely on cheap shots, but when they hit, they hit hard. Despite being a mindless beat ’em up, there’s a little strategy to be found under all the blood once you start meeting tougher enemies, as simply hammering the punch button just won’t do. 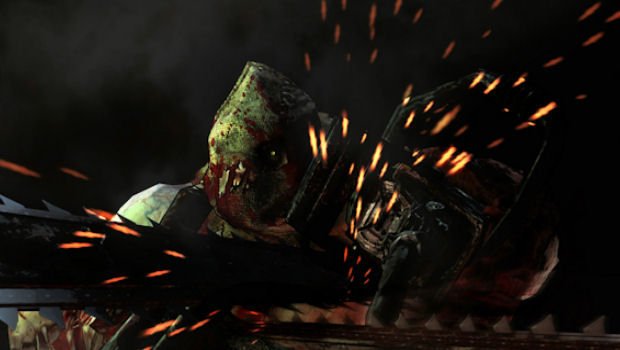 Rick has access to various fast and heavy attacks that can be extended by collecting blood and spending it on unlockable abilities. Extra health, new attacks, and a crucial invincible dodge move are all on offer, and the blood flows so freely that you won’t have any trouble stocking up on what you need. As well as regular combat, Rick can also unleash special Mask moves that transform his limbs into weapons or siphon health from enemies to regenerate his own. He can also let the Mask take over his body entirely for a limited time, becoming a hulking mass of destruction.

In keeping with tradition, Splatterhouse has plenty of melee weapons littered throughout each level. Cleavers, 2x4s, Pipes, Chainsaws, enemy limbs and even Rick’s own severed arm can be put to use. They can be very powerful, but their attacks often feel repetitive and they break very easily.

Speaking of powerful but repetitive, Splatterhouse‘s big contribution to the world of entertainment is the “Splatter Kill”. When sufficiently weakened, enemies can be executed in some of the most stupidly brutal kills you’ll ever find in a videogame. From pulling out a demon’s lungs to punching through a monster’s puckered, red-raw anus, the Splatter Kills will make you laugh if nothing else. Unfortunately, each kill is only funny the first time, and there’s a very limited amount of them. There are about eight or nine Splatter Kill animations in the entire game, and while they are entertaining and amusing, they start to become quite tired by the end. 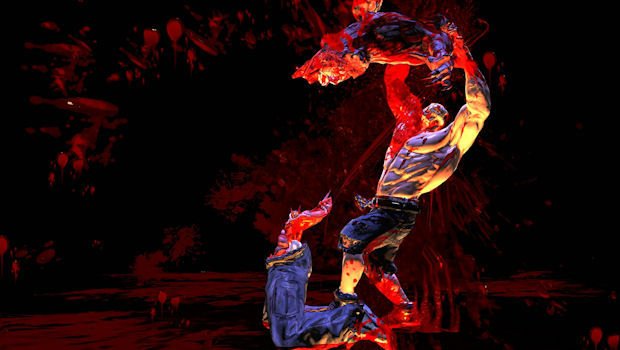 The game attempts to take its retro references to the next level by sprinkling various 2D sections throughout the game. These moments had potential to be amazing, with background music inspired by the 16-bit era and a cool visual approach, but unfortunately these portions are the weakest. For some reason, Namco felt the need to put in a lot of bad platforming and no checkpoints. Since Rick cannot jump over a hole to save his life (literally), there is a lot of frustration to be had, and a lot of replaying. To be fair, each 2D section gets better than the last, with the first being almost unbearable and the later ones almost becoming fun, but these sections really ought to have been kept to a straight beat ’em up format as opposed to a platforming one.

The nod to the original franchise is much appreciated, however, and this is an area in which Splatterhouse thoroughly excels. From weapons to enemies and a very familiar chainsaw-wielding boss, this is a game that pays tribute and homage to one of the most shameless games in history, and the love that the developers have for the series is obvious. The remake drowns lovers of the arcade classics in fan service.

There’s also a decent amount of content on the disc. The main story mode will take your standard eight or so hours to beat, but there’s also a wave-based survival mode, unlockable nude “photographs” of Jennifer to find and ogle over, as well as all three original Splatterhouse games. The classics are generally good ports too, except for a quiet, annoying tone that plays in the background of each title. 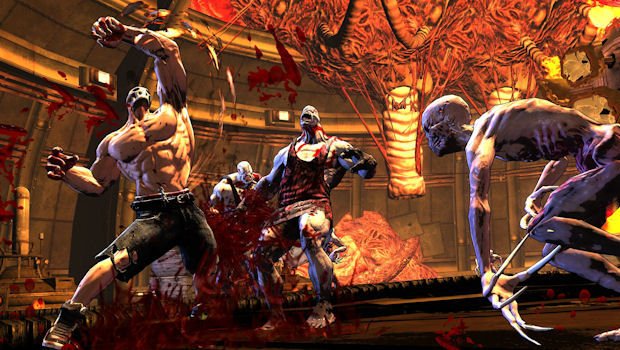 A few technical problems really lie at the heart of the game’s biggest flaws. For instance, the game’s tendency to frequently kill you would be fine if not for some aggravatingly lengthy load times. They’re very cool loading screens, I’ll grant you, but they grate on the nerves when you’re having to sit and do nothing for a minute or two between deaths. This isn’t helped by a number of unskippable cutscenes that often occur before the game’s hardest moments.

The game’s hit detection sometimes feels a little off, and Rick has a problem with ledges, tending to clip over the edge of a deadly chasm if he gets too close to it. Various sections involving collapsing floors serve only to highlight this flaw in abundance. While we’re at it, the camera isn’t often the most helpful of friends, especially during boss fights.

Despite the inconsistent lack of polish, Splatterhouse‘s presentation is quite good. The graphics pop with an impressive comic book style, and all that important gore is animated superbly. A stupid metal soundtrack only enhances the game’s absurdity and ramps up the entertainment, if only ironically. The package is completed by the constant commentary of Rick’s Terror Mask. Voiced by Jim Cummings, the Mask’s fourth-wall breaking sarcasm and love of inappropriate swearing is a definite highlight, and even induces a giggle or two. 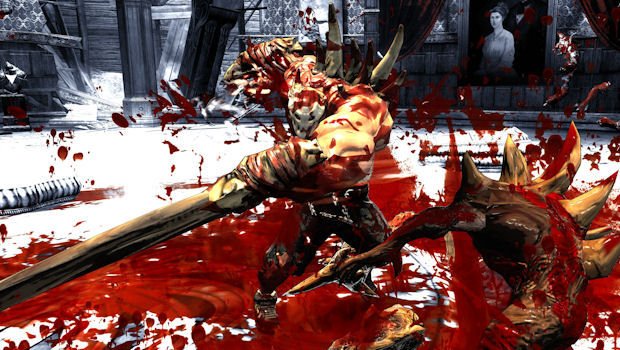 Splatterhouse has problems that are pretty hard to ignore, especially some of the more painful 2D sections and loading times. Despite this, you won’t find many remakes as faithful as this one, with an old school mentality that goes right down to the hardcore difficulty and simplistic combat. Some may find the endless cavalcade of violent button mashing boring, but if you want complex combos and deep gameplay, why are you playing Splatterhouse?

This game was better than I thought it would be, and better than it perhaps should have been. With more refinement and redesigned (or eliminated) platforming, this could have been a classic in the beat ’em up genre, but as it stands, Splatterhouse is pretty damn good for what it is, and packs enough content to keep fans satisfied. Ridiculous gore, silly metal music, and endless amounts of brutal, nostalgic combat.

I think Namco just about got away with it.