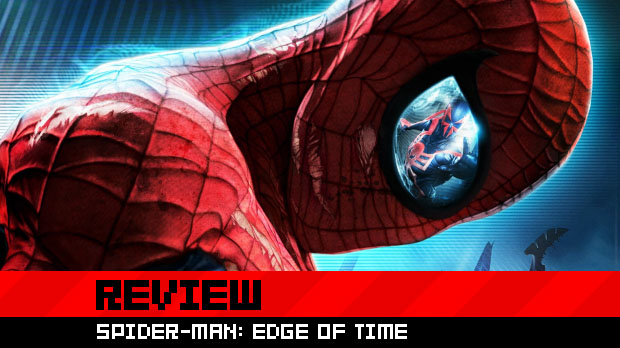 Spider-Man: Shattered Dimensions was better than many licensed games on the market, but it certainly wasn’t anything special. At the very least, it included a wide range of recognizable Spider-Man villains and a flowing combat system that, while fairly mundane, got the job done.

A year later, Beenox is back with Spider-Man: Edge of Time, and a unique design perspective. While sequels tend to get bigger and more ambitious, Edge of Time seems to think that scaling everything back is the way to go. 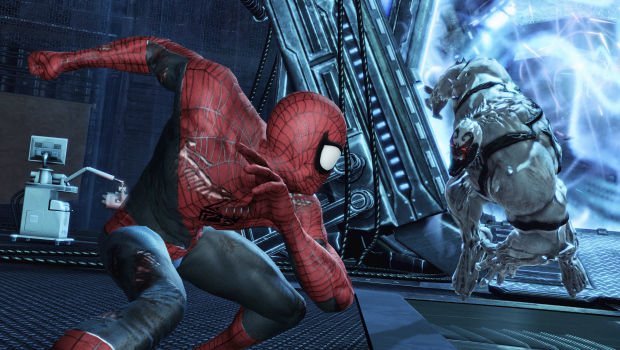 Spider-Man: Edge of Time reduces the amount of playable Spider-Men from four to two this time around, focusing purely on the “Amazing” era Spidey and his 2099 alternative. Following a battle with Anti-Venom in which Peter Parker is killed, 2099 Spider-Man finds himself in a situation where he can alter history, putting a stop to the plans of a nefarious CEO who happens to be voiced by Val Kilmer.

Most comic book games realize that the key to success is to give the fans as many character appearances as possible. Shattered Dimensions provided a good selection of villains for fans to get excited over, while the upcoming Batman: Arkham City has gone crazy with classic enemies and cameo appearances. It seems so strange, then, that Edge of Time does away with that driving principal entirely.

With time in disarray, most of Spider-Man’s villains were altered to not become villains at all. Aside from Anti-Venom, we only meet two other opposing Spider-Man characters — a weak-willed and unimposing version of Dr. Octavius and a “fake” Black Cat. Although the game hints at cool alternative versions of established characters, we never see anybody. We don’t get to meet the superhero version of Scorpion or see Mysterio as a successful Hollywood director. The alternate timeline full of interesting, potentially hilarious new takes on Spider-Man characters is never actually seen, since the whole game takes place in a single building. The game’s two biggest villains were actually created by Beenox, further taking the game away from anything that would satisfy comic book fans. 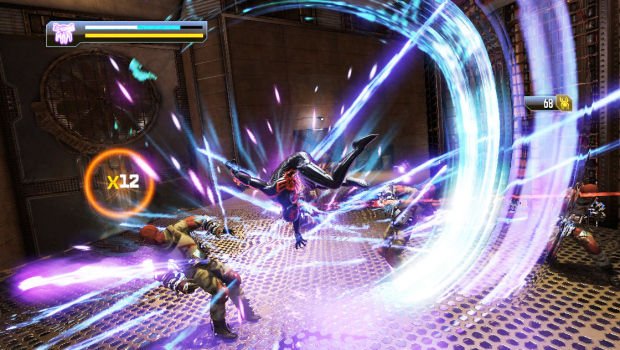 Rather than open up the game beyond Shattered Dimensions, Beenox pulled everything back with Edge of Time, perhaps further back than any comic-based game has gone. The entire thing takes place in a single office tower full of small corridors and big, arena-like rooms. Progress mostly consists of pulling switches to open doors or finding enemies that hold keys to open other doors. It’s the kind of back-and-forth, humdrum structure we’ve seen in games since the nineties and the type of experience that was a dime-a-dozen in the last generation of games.

Using tried-and-tested Spider-Man mechanics, players press and hold the shoulder button to web-sling, or tap it to instantly pull Parker/O’Hara to a pre-set location. Pushing the Spider-Men toward a wall will also cause them to stick to it, at the cost of having a camera that occasionally fails to cope with the new perspective. There are moments in the game that conspire to force players to use these skills, but most of the environments are so small and tight that it’s impractical to swing around on a web, thus eliminating the need for one of Spider-Man’s most iconic abilities.

The combat system is relatively unchanged from Shattered Dimensions, using button mashing commands to perform close attacks, long-ranged power attacks, and shoot web projectiles. Although the Amazing and 2099 characters perform slightly differently, general control remains the same for both of them. The Spider-Men can also create a “Time Paradox” that freezes enemies around them for a limited amount of time, or initiate a super-speeding focus mode that makes Parker faster and causes O’Hara to deposit distracting clones of himself. As with Dimensions, it’s a combat system that remains wholly unimpressive and derivative, but similarly fails to offend. 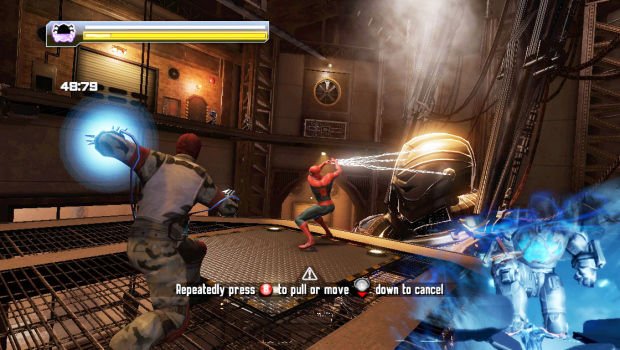 As is custom, each Spider-Man can be upgraded with experience points found in the environment or won from enemies. These add new skills that make use of a stamina meter, as well as extra strength to existing combat maneuvers. In addition, health and stamina is enhanced by collecting Golden Spiders, found hiding in the environment or earned via combat challenges.

The big selling point for Edge of Time is the idea that actions in one timeline affect the world in another, as Peter Parker and Miguel O’Hara fight in both the present day and the future. However, none of this actually happens in-game. Players don’t get to choose which Spider-Man they play, and any “consequences” are scripted. Carefully chosen marketing words make it sound like you’ll have a dynamic, time-swapping adventure, but that’s not the case. This is a linear, straightforward game, with players forced to play as both Amazing and 2099 Spider-Man at set intervals.

Generally, Beenox does just enough for its game to be considered playable while refusing to ever rise above its station as a quickly produced cash-in. As far as those types of games go, Edge of Time is fairly decent, but those are some incredibly low standards. Edge of Time seems happy to be a king of the flies, rather than ever striking out to be something impressive or special. Throw in a bunch of unskippable cutscenes and awful checkpointing (with checkpoints usually occurring right before some of those aforementioned cutscenes) and you’ve got a recipe for a typical, mediocre, pointless licensed experience that paints by numbers without regret. 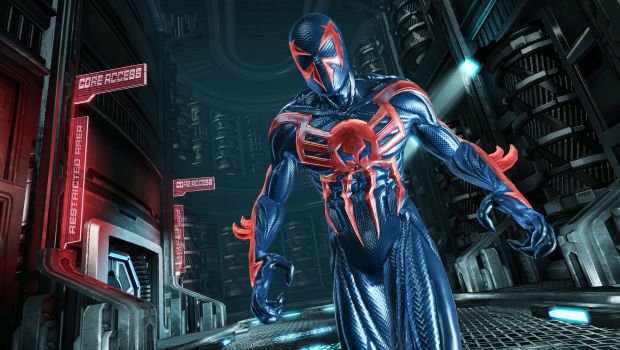 Spider-Man: Edge of Time isn’t unplayable and it’s not the worst title on the market, but it’s not remarkable in the least. The lack of even basic ambition confuses me, as I can’t fathom why Beenox thought we only needed Anti-Venom as a recognizable villain alongside two characters the studio invented itself. Most games of this nature earn some good grace by at least providing a bunch of famous characters to meet, but setting the whole game inside a boring corporate headquarters and having Spider-Man face off against droves of repetitive robot enemies doesn’t cater to anybody.

Filed under... #Activision#Comics#Spider-Man#Spider-Man: Edge of Time