Have you ever had a game that just clicked with you right off the bat? You play one game, one level, one match, or one round, and its charms impress you enough that you’re in, no questions asked?

Spellbreak is the first game in a long time to click with me like that. I decided to try it out on a whim and found myself ignoring the alarm on my phone that tells me to go to sleep just so I could get in another round or two. I was immediately and legitimately hooked. The battle system is spectacular, and I just wanted to keep playing until my eyes would refuse to stay open.

The more I played, the better I got, and soon enough, I realized this might be the perfect battle royale for me. And it really could be if everything else about it wasn’t so goddamn dull.

I’m not exaggerating when I say the gameplay in Spellbreak is phenomenal. Switching out the guns and grenades common to the battle royale genre for magic is an inspired choice, and the execution is nearly flawless. The game features a dual-attack system where each arm controls one of six different elements — earth, fire, ice, wind, poison, and lightning — that you can combine for devastating attacks against your opponents.

Before you go into a match — either solo, duo, or group — you pick your character class from those elements. Whichever element you choose will be grafted to your right arm for the duration of your match, controlled with the right shoulder buttons on whatever Switch controller you choose to use. As for your left arm, you’re free to swap out whatever gauntlets you find on the map for the other five elements. So if you choose the poison class and pick up a fire gauntlet, you’ll end up with the capability to create a wall of poison fire. Mix fire and wind, and you can conjure up a flaming tornado.

Each element has two attacks assigned to it. The ZR/ZL buttons control your basic spells while the R/L buttons control your sorcery skills that have their own, independent cooldowns. Each element has its own unique spell and sorcery. Pick up a lightning gauntlet, for example, and your spell is a simple shock attack while the sorcery brings down a bolt that affects a larger area.

Mixing these elements requires only shooting a spell into a bit of sorcery. So if you or somebody else in the match uses their poison powers to throw down a gas cloud, you can freeze that cloud with your ice spell or electrify it with lightning. Mixing and matching your spells and abilities is the key to success, as is learning the ins and outs of your class. While all elements are usable by all players, there are abilities tied to elements you can only access if you pick it as your class. For instance, if you pick the ice class and fire your arrow spell, you’ll create an ice path you can skate across.

The longer you last, the more class abilities you unlock. Like every other battle royale, there is a slowly moving wall of death that pushes players closer to one another. Each time you make it inside the ring, you level up, unlocking new abilities. Depending on your class, these can greatly change how you go about finishing your match. You can also enhance your character with runes, such as teleportation or temporary invisibility, that can give you the edge when there are only a few players remaining. The flight rune has worked wonders for me every time I find it on the map.

You’ll need to equip the specific rune to access your flight capabilities, but each character can float for a short period. The better you get at Spellbreak, the more you’ll learn how easy it can be to mix the right runes with the right classes to stay in the air for much longer than your opponents. The amount of mana you have dictates how long you can float. You start each match with very little mana, but you can expand it by finding the right accessories on the map. 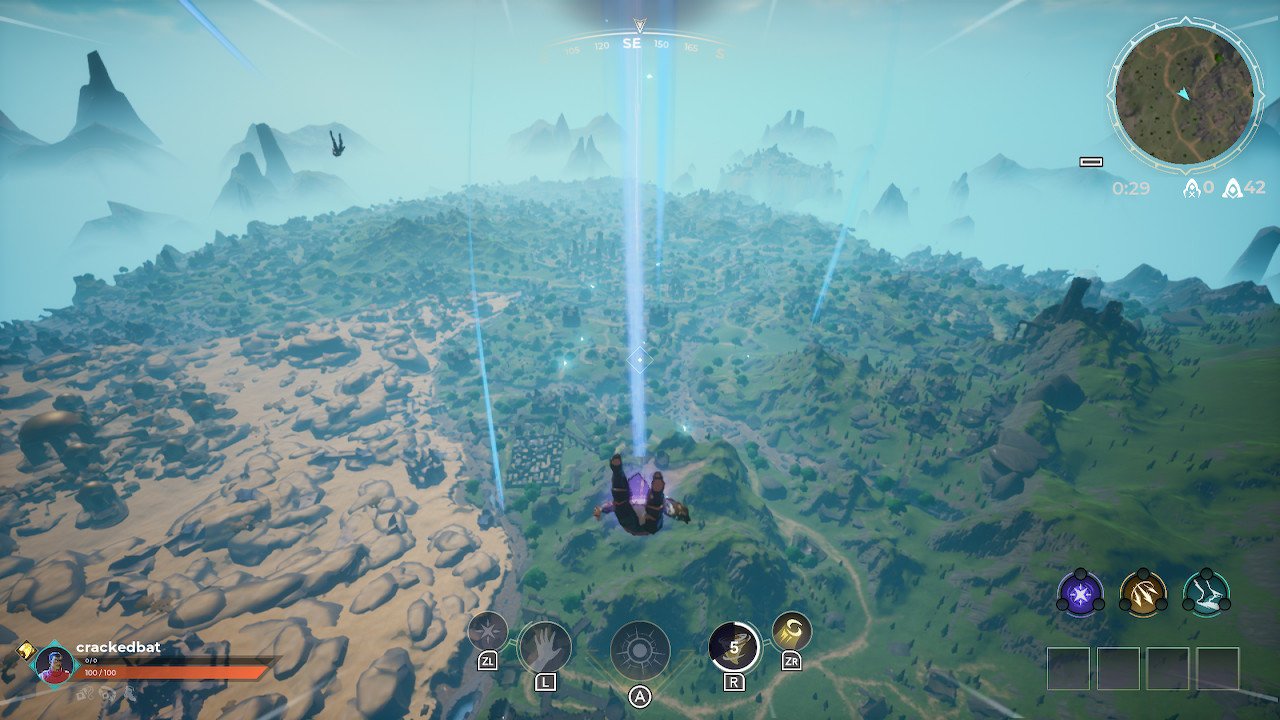 Chances are you’ll find a lot of accessories on this map, as well as a lot of gauntlets, potions, shields, scrolls, and runes. What you won’t find, or at least what I didn’t find, are very many other players. In my very first match, I didn’t see another player for 10 minutes. In the last match I played before writing this, I didn’t see another team for 10 minutes. While some battle royales are pushing their player counts higher and higher, Spellbreak seems to lock the number of players it allows onto a map at around 45.

A player count that low wouldn’t be so bad if the map wasn’t so unnecessarily enormous. Hollow Lands is way too big for what Proletariat is bringing us here. And it’s dull. Oh God is this map dull. I thought the idea for a battle royale set in a magical world would give us a wide variety of enchanted locations to explore. But this behemoth of a battleground is instead littered with identical-looking burned-out houses, burned-out towns, and burned-out castles. I’ve seen some people compare it to Hyrule in Breath of the Wild, but at least Hyrule had some life to it.

It’s really disappointing to explore as much of the map as I can only to be rewarded with the same partially destroyed buildings around every corner. Whatever creativity that went into crafting the battle system clearly ran out before they got to the map design, and the other aesthetics don’t fare much better. Character designs are pretty basic, and the various outfits you can buy with gold earned in-game — or bought with real money — all feel as though they were ripped out of other fantasy-based video games. 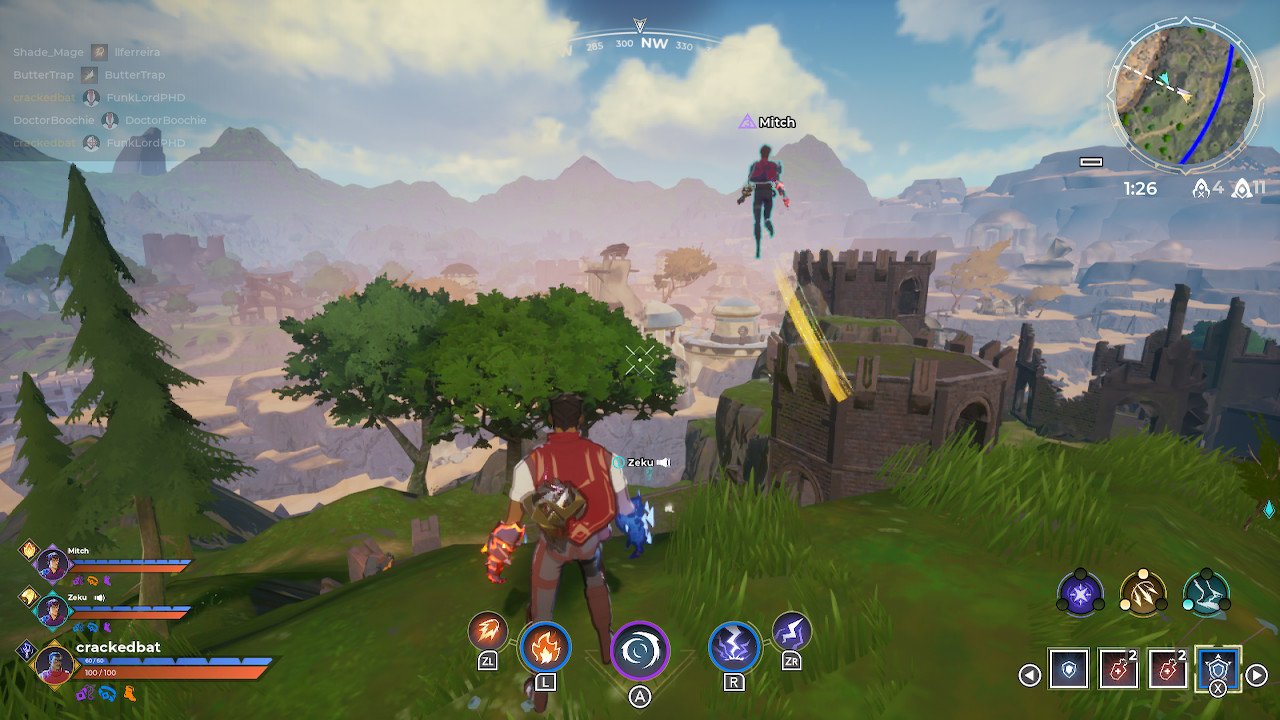 I did find one costume I like on a teammate of mine, but unfortunately, they disconnected before I could get a good look at it. Disconnections have been a recurring issue for the past two weeks, even with the most recent update. Group matches are supposed to team you up with two other players, but far too many of my matches began with only one teammate, leaving us at a not-entirely-unsurmountable disadvantage. I’ve been dropped from several matches due to server errors and have routinely run into the dreaded black screen. I’d be playing fine, minding my own business, then suddenly the screen would go black. However, my HUD would still be there, and while I was still in the game and able to cast magic and drink potions, I couldn’t move from my position and would ultimately die at the hands of the wall of death or another player. The black screen is a far bigger annoyance to me than disconnecting because it always seems to happen when I’m one of the last four players or teams.

Future updates will hopefully sort out all those connection issues, but what Spellbreak needs more than anything is a glow up. Because the elemental combat here is sensational, but all that goodness is trapped in this garden-variety fantasy setting that’s holding back the true potential of what Proletariat could create here.

[This review is based on a retail version of the free-to-play game downloaded from the eShop.]