Spectra isn’t a lot of things. It isn’t complicated; its mechanics and entire premise can be learned in literally five seconds. It isn’t structured; level design is eschewed for procedural generation. It isn’t long; an hour of playing will have unlocked all the tracks with plenty of time to retry the many failed ones. 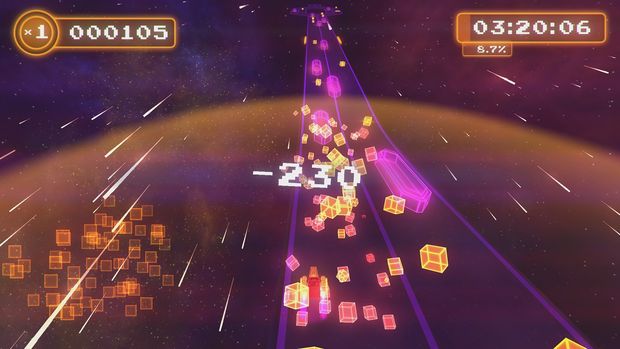 For all the things Spectra isn’t, it does one thing very very well. The chiptune beats instantly remind of Chipzel’s in Super Hexagon — a game which is renowned for its recognizable and catchy music, and for its addictive qualities. There’s a logical explanation for this connection: the music is made by Chipzel.

Good as that component predictably is, one can’t shake the feeling that the developers put the music too far at the forefront of Spectra. It’s tied to the core of the game in such a way that Gateway Interactive actually developed around it. The ten levels are procedurally generated for what’s happening with the music. Dynamic (racing) tracks for static (music) tracks.

The problem isn’t so much with the method, but with the absolute lack of variation in it. Spectra takes place on a winding two-lane road (like a Sheryl Crow song) with hexagonal prisms peppered along the way liberally to serve as obstacles. The entirety of Spectra consists of avoiding those barriers, picking up gold pellets, and ever-so-occasionally hitting a turbo marker that not only boosts speed but a score multiplier too.

Technically, that score is probably the main reason to play Spectra. It’s heavy on arcade-like qualities in that it asks the player to put up with great repetition in pursuit of leaderboard glory. Unfortunately, the procedural generation makes it so that no one can necessarily hunker down and teach themselves how to dominate the game.

Instead, it emphasizes reaction over pattern recognition, which would be noble if the algorithm didn’t often feel as if it spawns too many barriers at once. Sometimes it could very well be impossible to escape those situations unscathed. It’s mostly unnoticeable on the earlier levels, but it’s all too apparent in the later ones.

Hampering those efforts is a control system that’s not poor, but just slightly too loose for a game that only asks the player to steer. It’s more a complication with the ship’s animation than the actual controls. Regardless, it causes the tiniest of disconnects. A reaction-based game on a narrow pathway with thousands of hurdles has no excuse for not giving the player complete control. Spectra seemingly knows it as going off-track often grants a split second mercy window to get back on before plunging into the abyss.

Besides score chasing, players may find themselves insistent on simply trying to finish each level. Clocking in around three and a half minutes each, it’s no small feat as Spectra lends itself well to temporary concentration lapses causing immediate failure. The track length often seems about a minute too long to sustain any spurts of enjoyment. Even completion is unsatisfying as there’s no finish line due to the game being unsure how far you will have made it over the duration of the song; rather than any sort of fanfare, a new screen pops up informing you of your accomplishment.

I don’t usually rely so literally upon Destructoid’s scoring guide when assigning a number for a review, but it feels so apt in the case of Spectra. It’s like a boring meal that did nothing more than chew up a little time. It does lack any real flavor. It didn’t leave me any different than it found me. It’s tolerable, but not anything special. Well, the music is special, but it turns out that Spectra can’t stand on the merits of its music alone.