Time is an illusion. Lunchtime doubly so.

Spacebase Startopia is a bit of a weird thing. On the surface, it is definitely some sort of remake/reimagining/remaster of 2001’s Startopia. It’s even right there in the name. Looking over the marketing however, you’ll find a suspicious lack of mention for the original or a word about what it considers itself.

Make no mistake, though, this is Startopia. Sure, it’s got a new paint job and things got rejiggered. The aliens are new, there’s no sexy love-alien brothel, and things have been renamed, but the list of similarities dwarf the differences. Simply looking at the game can tell you that, yep, this is Startopia.

It is definitely Startopia. 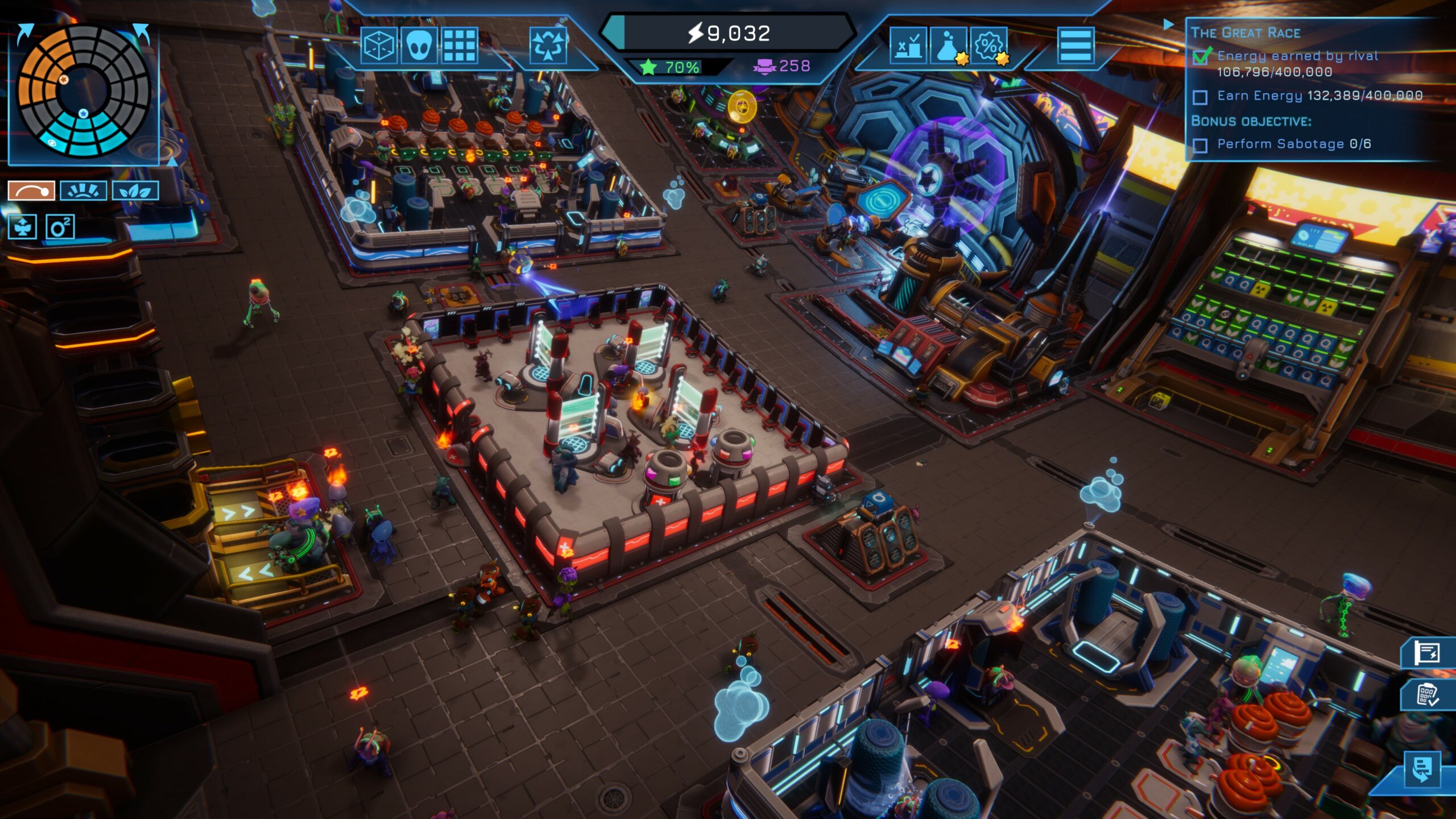 A lot of old managerial games are seemingly getting the update treatment. Two Point Hospital is a modernized Theme Hospital, Evil Genius 2 is an updated Evil Genius, and you can take your pick of RollerCoaster Tycoon renewals. Startopia might not be as odd of a choice as you’d expect. It was created by Mucky Foot, essentially a spin-off of Bullfrog; patron saint of weird management games.

I originally came across the title as a demo and was transfixed. I made it a goal to find a copy, and eventually pulled one out of a bargain bin. I then picked it up again when it was re-released digitally by Square Enix. It turns out, I wasn’t in love with it anymore. It’s still an endearing and memorable title for many reasons, but it doesn’t quite nail the landing.

If you’re unfamiliar, Startopia was a space station management game that takes heavy inspiration from the cynical humor of The Hitchhiker’s Guide to the Galaxy. You were given the difficult task of keeping aliens from different backgrounds and different social levels happy on the same floating space donut. You had to juggle their needs while also dealing with other space issues like garbage and plagues.

Spacebase Startopia is entirely that. Most of the buildings are present with slight alterations, and the space donut is comprised of three levels: the sub level, the fun deck, and the bio deck. You place accommodations to try and meet the needs of the aliens that visit and sponge all the energy (money) out of their pockets. The game is separated into a series of missions, each with a different focus and main objective. There’s also a sandbox mode and co-op and competitive multiplayer options.

The sub deck is the workhorse of your donut. You put your security, recycling, and security stuff down there. The fun deck is exactly as it sounds. Arcade, discos, gambling dens, fancy hotels; anything that can be bathed in neon goes there. As for the bio deck, it’s not only the place where aliens go to get back to nature, it also produces supplies for you to manufacture in the factory.

Along the way, you have to hire various aliens to keep these places running alongside your SCU… er, FUZZY drones. Keeping track of your staff is an absolute pain because they have needs too, so they’ll screw off to take care of them whenever they get pissy. I went by the rule that if I saw an accommodation go unstaffed, I’d just hire more of that alien. It’s really not the best way of doing things, but the staff menu can’t be sorted by species. 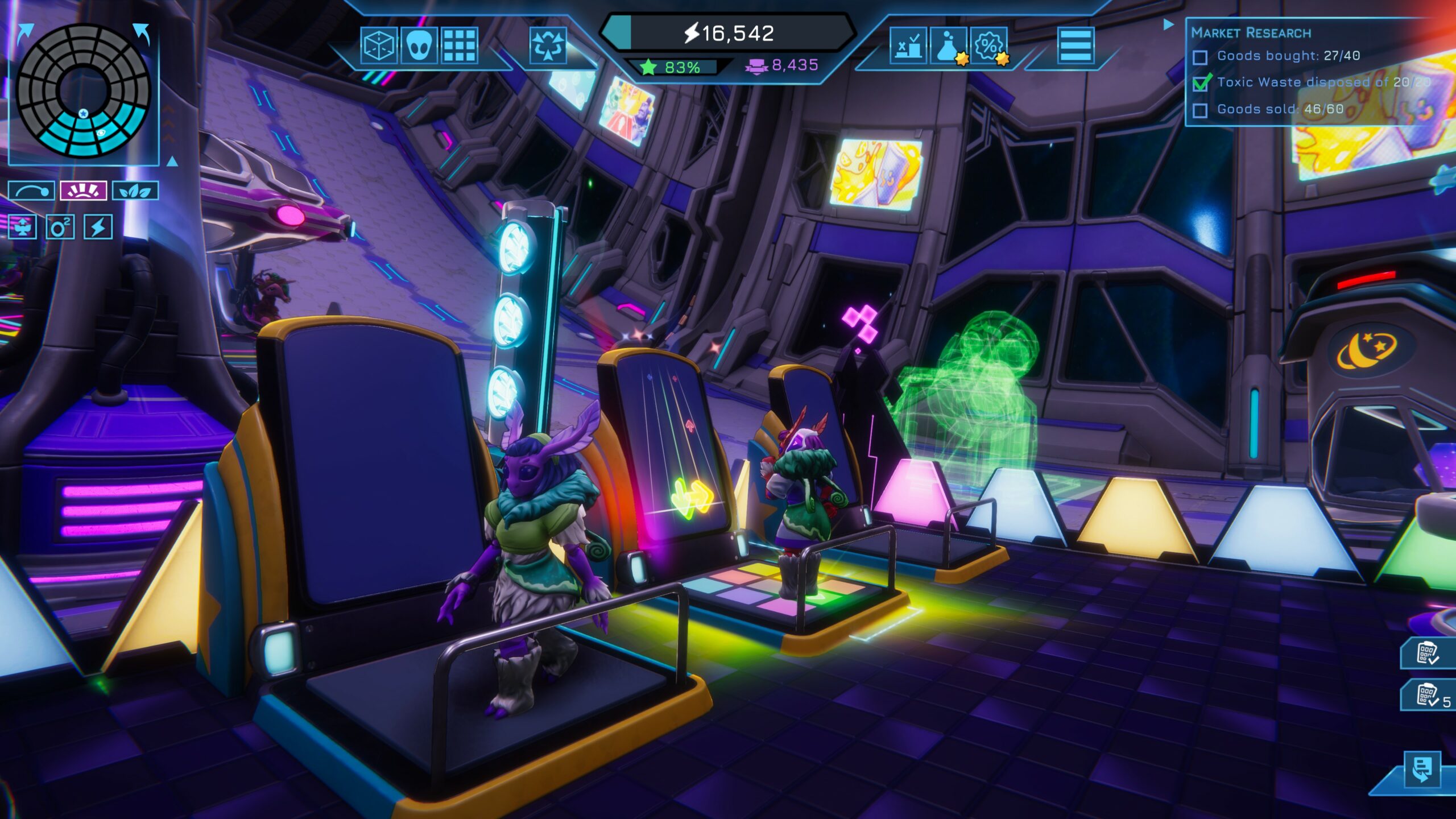 One of my major points of frustration with Spacebase Startopia is its unwillingness to really go into any depth explaining things. Take the bio deck, for instance. You hire aliens to tend to it, grow plants, and harvest them, but it tells you nothing about running it properly. There are tooltips that tell you what terrain grows what items, but the game doesn’t take the moment to explain how production works there. Even if you find the little hints that tell you what grows what, I never discovered the optimal number of aliens to tend to the plants. They all just dance around, seemingly doing nothing useful, so I’d hire a bunch and then just hire more if I got frustrated about waiting for supplies.

The worst case of this was when it came to researching. You can trade prestige for the first tier of research easily, but upgrades need to be developed in a lab. How do you research upgrades? Good question. When that mission rolled around, I was able to upgrade FUZZY bots to the top, but everything else just looked at me funny. You need to drop a packed box of that item onto the lab to get it developed. I had to look this fact up outside of the game.

This problem might be because they harness you to a monumentally unhelpful AI that just tells you what to do next, then sits back and roasts you while you do it. The character is a cross between VAL from the original Startopia and GLaDOS from Portal; a sassy AI that works as your handler. Some players seem to have a lot of grievances about this version of VAL. I didn’t mind them, personally, but if they rub you the wrong way, you can turn them off entirely. 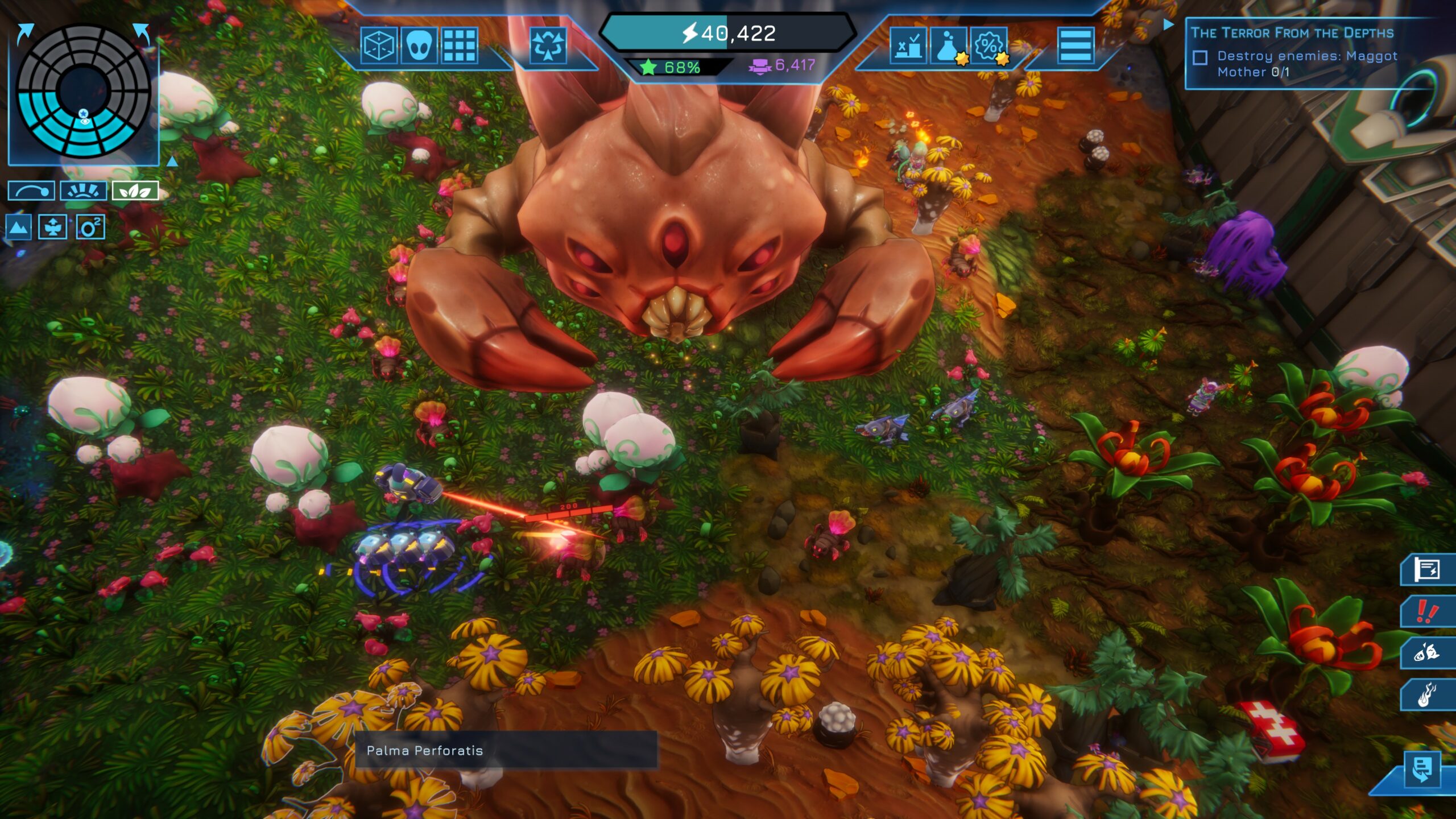 The other problem that Spacebase Startopia has is that it isn’t much of an improvement over Startopia. It’s just Startopia again, but with less personality. One place that it does improve is with combat. The original was very hands-off with combat and it was less than compelling, bordering on annoying. Here you can direct your drones and build mechs, but be careful when setting up your buildings, because mechs can’t pathfind through tight areas and they’ll just wind up stuck somewhere. Again, the game doesn’t tell you beforehand that mechs require roads, so to maximize space, you might just sardine can that donut and not be able to move your mechs around.

The game also has the sort of managerial make-up where you start over on each level. All your research and progression is moot each time you hit a loading screen. That’s nothing too unusual, as it follows RollerCoaster Tycoon and Two Point Hospital‘s progression, but here it’s just too slow. It becomes repetitive because every donut is the same. By the later levels, you’ll probably just be going down the checklist of what you need to have set up. 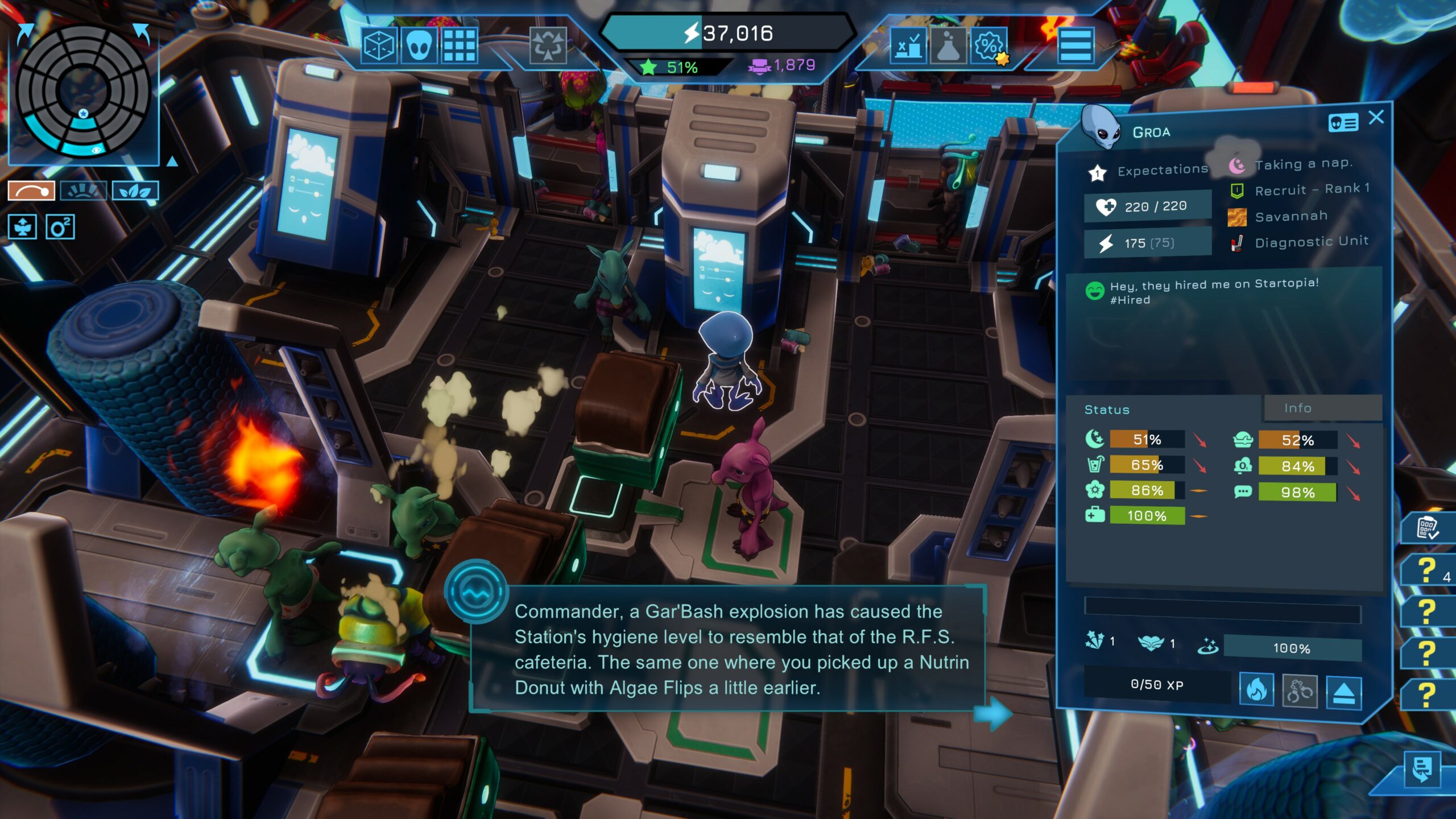 The main draw could therefore be the sandbox or multiplayer modes, but they simply didn’t hold my interest. It’s hard for me to just build something for the sake of it anymore, I need that progression. The multiplayer also just seems to add a layer of combat to the main gameplay, and while it’s improved over Startopia, the combat still isn’t that compelling.

If you take the game as a platform for bigger things, it may make a bit more sense. On this release, they have reached comparison to Startopia, but with some updates, DLC, or expansions, it could be an improved experience. I can’t critique based off of hopes and dreams, though. As it stands, I have no reason to recommend this over the original title, as old as it may be at this point.

That’s not to say Spacebase Startopia is a bad game, it’s just something of a disappointment. At best, it feels like a remake that makes a few missteps. It’s a forgery at worst. If you really want more Startopia but can’t stand to look at its dated graphics, there’s definitely something for you here. Otherwise, you’re better off docking with a different donut.