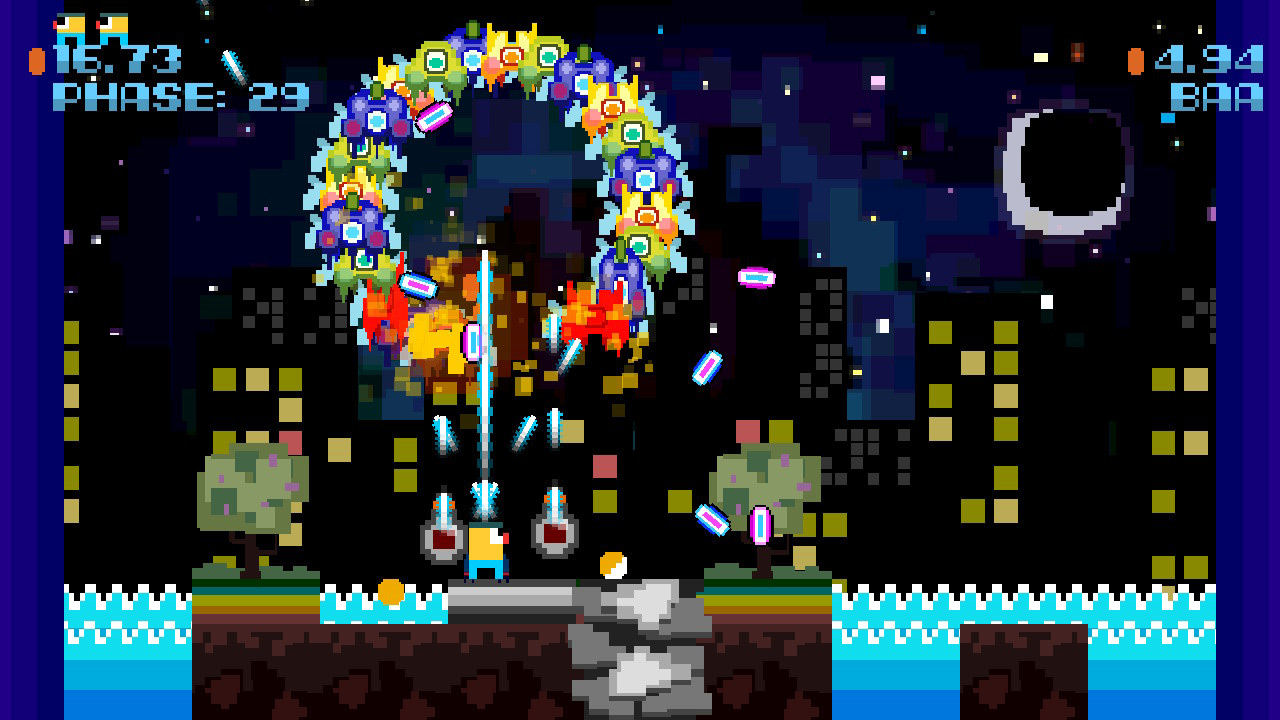 2014’s Woah Dave! from indie developer MiniVisions should have clicked with me in an instant. As a reimagining of the single-screen platformers that died at the arcades right as I first got into gaming, it should have been the type of throwback that kept me coming back for more. But something about it just never sat right with me. Maybe it was the color palette or the pick-up-and-throw gameplay, Woah Dave! was just too off for me to find real enjoyment in it.

Space Dave! ain’t got none of those issues. 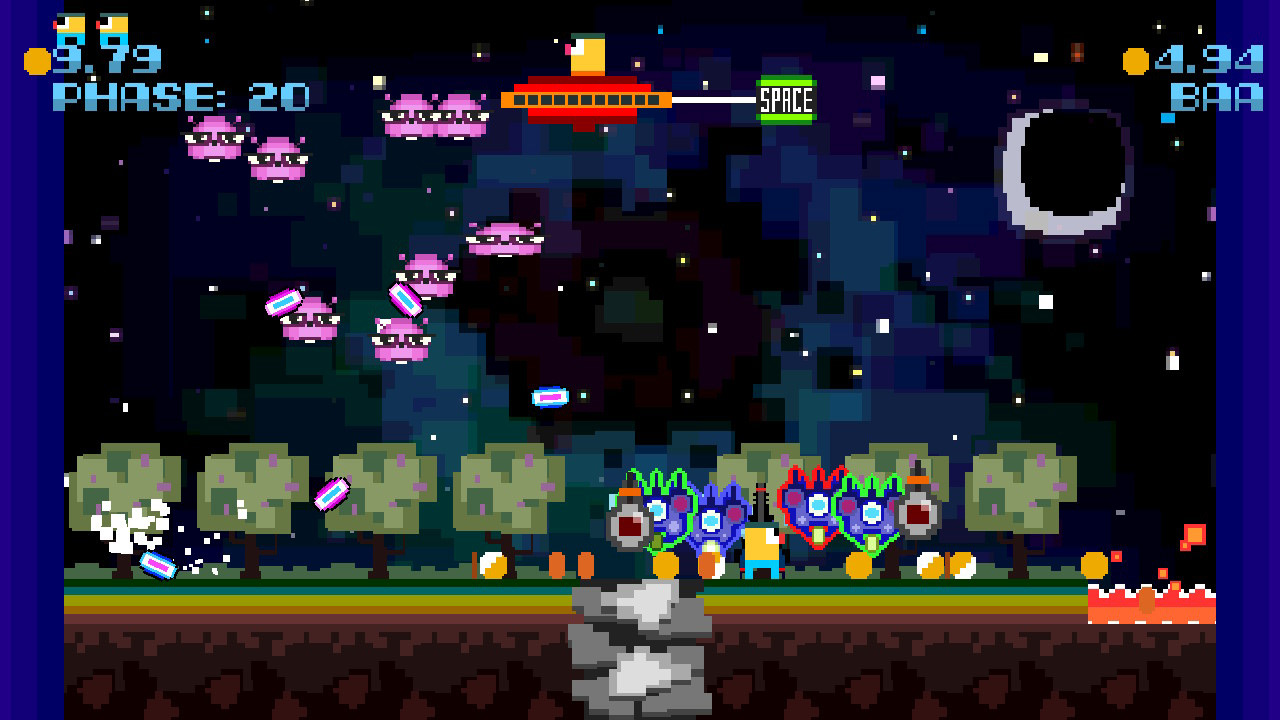 Inspired by Galaga, Space Invaders and the old-school schmups of yore, Space Dave! is a simple single-screen shooter that challenges players to survive as many phases of an alien invasion as they can. Aliens shoot, I shoot back. Simple stuff. Just like any retro arcade shooter I’ve played, the aliens arrive in waves that vary and alternate as I progress through the game. Survive enough phases and I reach a boss battle which, though often repetitive, is thoroughly entertaining.

Like Woah Dave!, there is an added challenge here beyond just killing all the aliens. Instead of a standard point system, there are coins I need to collect with each enemy I kill. There are also eight trees I need to protect through my endeavors. Often times an alien will try and kamikaze the ground and if I can’t blast them out of the sky before they do, the spot on the ground they hit becomes molten lava and the alien bounces back into the sky with a more erratic attack pattern. With power-ups, I can freeze the lava allowing me to walk over it safely, but I can also return it to its original state by throwing enough alien skulls into it. At the end of each phase, I get five cents for every tree left standing with a bonus nickel if they’re all there.

There are three difficulty levels to choose from but all can be pretty damn tough. If I drop my attention for even a second it means the end of one of my three lives. The only life vest this game throws me is the space block. Occasionally, Commander Video or some other character will fly across the top of the screen and drop one of these blocks. When I throw it, it emits a wave that captures or kills any enemies unlucky enough to be in its range. Those aliens it captures then become added guns for me.

This adds a genuine strategy to the game beyond dodge and shoot. Any enemy I capture and add to my arsenal has the same number of hit points as it did when it was still trying to kill me. So if I waste the space box on easy-to-kill grunts, they don’t last long on my side. It’s better to save the boxes if I can for the spongier aliens or to do massive damage in a boss battle.

The longer I play, the more I change how I play. Starting out I would look at the screen as a whole, admiring the elegantly simple art direction and toe-tapping tunes, but hours in I find myself hard-focused on my Dave (or Blue Dave or Dr. Rekt or whoever I am of the eight playable characters). That intense focus keeps me alive as I move about a steady stream of alien fire, only allowing the entire picture to come into focus when I hear the telltale sound of an enemy about to dive-bomb the dirt. On easy-peasy, this focus gets me through the end of the game. On bonkers — the game’s highest difficulty — it’s the only way I can survive each individual phase.

There is a two-player mode that makes the game more chaotic and it’s actually playable on the Switch screen. There is also an online leaderboard where I can see how my money collected compares with the rest of the world. Spoiler alert: I’m not as good as I think I am. Add in achievements, some of which can be quite difficult, and it makes for a complete if largely empty package.

Space Dave! is a little light on content, both in terms of modes and variety. The locations don’t look much different from one another. Boss concepts repeat. There isn’t much diversity in enemy design beyond recoloring and sponging up the aliens I wipe out in the early phases of the game. The repeating designs and attack patterns hold true to the titles that inspired Space Dave!, but those games faced hardware restrictions that determined their limitations whereas any restrictions Space Dave! has seem to be self-imposed.

Even if it isn’t everything it could be, Space Dave! is still a damn fun shooter and the exact type of game I want to pick up when I only have a few free minutes of downtime available. It’s fast, frantic, and frequently calling me back to beat my high score. The arcade scene may be deader than the Ouya, but Dave is doing his darndest to keep the spirit of its golden age alive and relevant in this modern era of gaming.