You know that when the main characters of the game you’re about to play are adorable animals like cats and penguins, you’re possibly playing a game aimed at children. A few months ago, I played Shaun The Sheep: Home Sheep Home 2 and found that despite the game being made for children, there was still a lot of fun to be had.

After it’s initial release on Xbox 360, would this be the case with the colourful and cute Space Ark on PC?

With the solar system decimated by a black hole, a team of animal Arkonauts departs from Earth in a space ship that looks suspiciously like a wooden boat, in an attempt to terraform new planets for settlement. There’s no reason to be interested in the story of the Arkonauts or how a zebra can actually fly a space craft. Suffice to say, the game is split into 4 different solar systems with a number of planets in each to terraform to suit your specific Arkonaut’s needs (ice planets for penguins, etcetera).

The way you’ll be terraforming the planets you come across is by collecting DNA gems a series of levels; hit the minimum combo target and you’ll be on the way to helping your Arkonaut create his or her own perfect world in space. To get a combo, you’ll need to collect DNA gems of the same colour within a really short space of time; take too long or start picking up a different colour and the combo is gone. There’s a tiered score for you to go for, and you’ll still be able to move onto the next level as long as you collect all the DNA gems, but fail to hit your minimum combo target and you won’t be able to terraform that level. 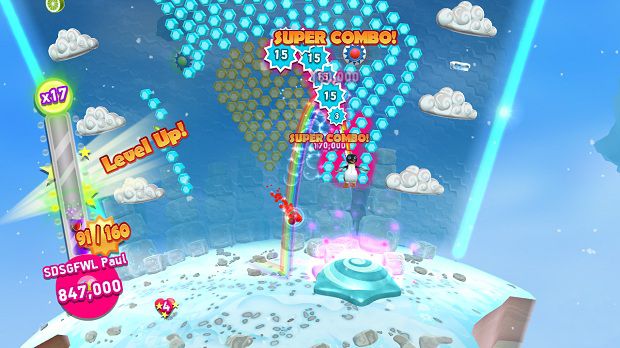 The actual gameplay of Space Ark is a kind of mix between Arkanoid and Breakout; you control both the Arkonaut and a bounce pad on the bottom of the screen. By using the two in unison, you can guide your Arkonaut around the level and pick up the DNA gems as quickly as you can in order to rack up a big combo score. You can guide your Arkonaut from left to right, as well as giving them a height boost by hitting the bounce pad at an exact time. Hit the ground, though, and you’ll lose a life and your collected combos will start to float away unless you can recover them.

Essentially these are the entire core of the gameplay of Space Ark. That’s not to say the game doesn’t throw some new elements from time to time, like the pinball-esque flippers and bounce pad clouds, but they never really shake up the core gameplay. Your goal is always the same: collect the gems and proceed. There’s never any big game changing switch-up at any point, and unfortunately this makes the game one-paced and fairly easy. Whilst later levels definitely raise the difficulty up by changing the gem arrangement around and introducing multiple planes of gems, it becomes really easy to just have your Arkonaut just bouncing up and down on the bounce pad whilst you plan your next move.

The game controls fairly simply on a keyboard. You use the arrow keys to control the bounce pad left and right, with the Enter key being used for initially launching your Arkonaut and for special powers like the machine gun. The power ups can be real handy, like the shield which stops your Arkonaut from losing gems when it hits the ground, whereas the machine gun is useful for taking out columns of gems. You can use a wired Xbox 360 controller as well, which Space Ark recognizes without any problems and which was a nice bonus. The only problem I found was that switching between the two felt super weird after long sessions using just the keyboard, it just feels like there’s a real difference in sensitivity between the keyboard and pad. Another small annoyance was that Space Ark wouldn’t ever display fullscreen despite me selecting the right option. 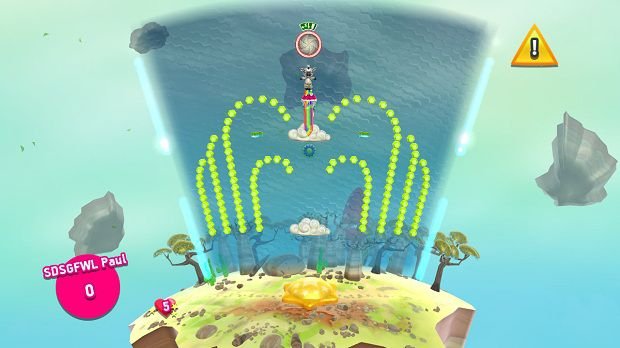 The biggest annoyance in Space Ark is the lack of a stage select feature. Fail to hit your combo target and you’re given the option to restart the level, but if you return to the game later, you’ll have to play each level of a planet in sequence just to get to the one you failed to claim. Whilst most of the early levels are a breeze, it would be much more useful being able to jump to a level you failed to terraform rather than being forced to play the entire section again.

Aside from this oversight, Space Ark doesn’t really do anything that’s bad. The game functions well enough and there are no bugs or glitches that either make it unplayable or broken. It’s just such a basic game that there’s little motivation to proceed with it. Picking up combos is relatively easy and common, so even scoring a big one feels a little underwhelming.

In the end, most of your momentum will ebb away and you’ll find yourself collecting the last lone DNA gems to move on and be done with the level instead of finding a surge of excitement as you finish. There are Time Trial and Survival modes, along with leader boards to compare your high scores with friends. However, if that doesn’t appeal then you may find yourself giving up on the Arkonauts’ journey sooner rather than later. Younger gamers will surely find the bright colourful visuals appealing, not to mention the cute animals and the low level of difficulty can keep them engaged but older gamers might find Space Ark a sugary but un-fulfilling snack.