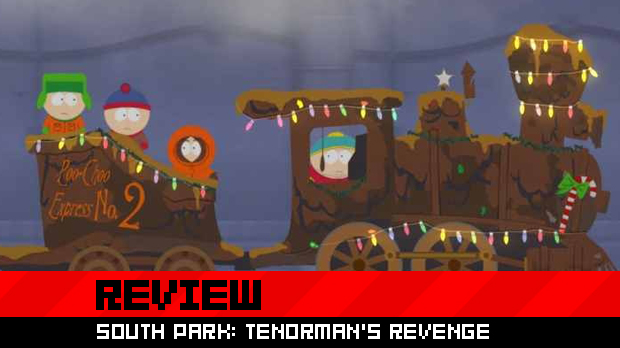 If the South Park kids had aged with the rest of us, they’d be in their early twenties. Stan would have likely gone to college on a football scholarship, maybe Kyle would be in law school by now. And I imagine Eric Cartman would be suffering from diabetes while Kenny, trapped by his economic status in that small town, probably would have taken up meth.

Out of all of them, Kenny would have the best likelihood of finding enjoyment in Tenorman’s Revenge.

Players can select to play as Kyle, Stan, Eric or Kenny and each brings a different special ability to the table which allows them to access different areas of a level. Stan throws footballs to hit distant switches. Eric can break through certain walls by charging, gut first. Kenny can crouch to charge up an extra-high jump and, as a ginger, Kyle can reveal his curly mane to temporarily confuse enemy force fields. All of these abilities have a secondary combat function for stunning enemies (with the exception of Kenny, whose extra jump height more than compensates).

The boys will also have opportunities to assume their superhero personas for a limited time, by collecting power-ups designated for specific kids scattered throughout stages. While transformed, heroic music ramps up and the transformed player has their special ability swapped for a different one appropriate to their hero. While most of these are pretty typical (The Human Kite glides, The Coon wall climbs), Mysterion’s ability to die and return in spirit form lends itself to some pretty clever sections of level design. 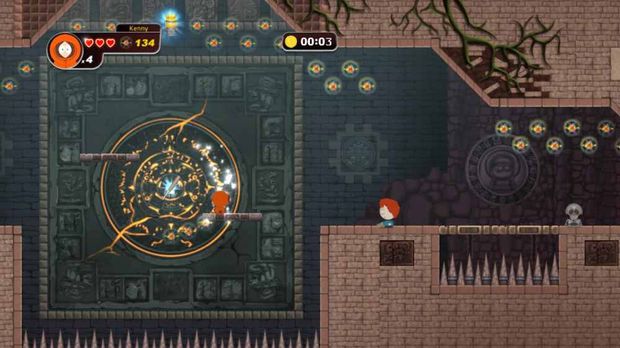 At the risk of sounding esoteric, South Park: Tenorman’s Revenge controls a lot like South Park looks on television. It’s simplistic — the left analog handles movement with three buttons for attacking, jumping and activating character abilities — and characters just sort of pop upwards when they jump in a manner that feels right in line with the show’s animation style. The boys can damage enemies by jumping on them or by using weapons found in stages. Without a weapon, the attack button delivers a feeble push which can knock down foes temporarily.

There is a fair variety of enemies, though you probably could be excused for not noticing it. Stages are dominated by “Gingerbots,” robotic redheads built by Tenorman to attack all non-gingers, but there are a few specialty enemies themed to each of the game’s major zones as well. There’s a good bit of fan service to be found in this respect, with a number of Dr. Mephisto’s mutant creations running about, reject towel clones, and an (somewhat disappointing) encounter with Manbearpig.

If there’s one thing which can be said of Tenorman’s Revenge, it’s that there is a lot of it. The goal of each level is to progress to the exit, collecting “Time Cores,” a collectible used to unlock new stages. Also littered about are “time particles” which, when collected, decrease an onscreen timer by one second. Hundreds (often well over a thousand) of these particles are in every stage, making it possible to drive the timer past zero into negative time. Medals (and Time Cores) are awarded for achieving speed goals. 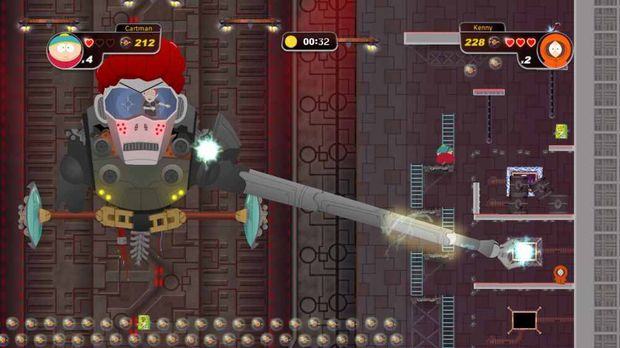 The design of the stages in Tenorman’s Revenge would be great if they didn’t have to accommodate the character diversity. As there are four characters with distinct abilities, levels wind up bloated as they try to make everyone feel important at some point by carving out routes which use those abilities. The upshot of this is that they are packed to the gills with secret passages, collectible items, and bonus areas, but it comes at the cost of most levels feeling like they last a lot longer than they’re fun for and there’s a good chance you’ll have to return to play stages again to earn enough cores to unlock the game’s later challenges.

That chance becomes a guarantee if you’re playing solo. There are ten or more Time Cores to collect in every stage (including the one awarded for earning a fast enough time) and roughly two-thirds of them are necessary to complete the game. A thorough search of a stage with a partner is usually enough to come up with a fair rate of completion on a level, but lone players are likely to find replaying the large stages with a different character to track down extra cores tedious by the time it becomes necessary to do so.

Sadly, while Tenorman’s Revenge is clearly built with the intent of being played by multiple people simultaneously as its optimal experience, it sabotages itself pretty severely in that respect by forcing all characters to remain onscreen together at all times, regardless of whether you’re playing locally or online. As players reach the edges of the screen, the camera pulls back and does so to a rather significant degree. But the stages are just so damned large that it’s often impossible to efficiently pursue multiple paths simultaneously, keeping temporarily unnecessary players entertained by collecting loose particles while others pursue routes only they can take. Instead, everyone is dragged along one path at a time, forcing lots of backtracking and periods of inactivity while up to three players wait for another to reach a switch or platform in areas geared toward one specific character’s abilities. 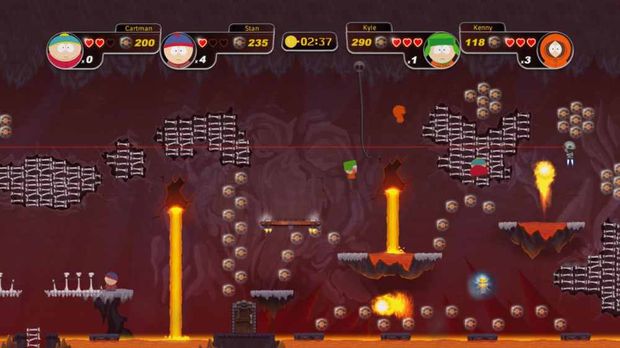 Further frustrating is the game’s netcode, which has not demonstrated itself to be particularly reliable. A less than perfect connection seems to cause response lag to all but the hosting player, sometimes delaying an action by as much as half a second, making the game at times unplayable.

Most disappointing of all is that the game is almost completely devoid of the sharp humor which makes South Park such a great program. Seemingly content to lift a number of notable locations the show has traveled to before and populating them with characters recognizable to fans, it utterly fails to do service to its source material by not capturing the spirit of the series. The main characters spout off no more than a couple of different canned lines at random during levels, while the dialog in cutscenes basically boils down to “neener-neener-neener,” a far cry from the biting satire fans of the show are accustomed to.

South Park: Tenorman’s Revenge isn’t a terrible game, but it’s not a successful one either. Branded as anything other than South Park, it would be instantly forgettable but the cachet of that license is such that it’s likely to draw in a fair few players. Apart from its visuals and recognizable voices (when they’re heard at all), there’s nothing South Park about it and could have easily been any other multiplayer platform game; a pretty mediocre one at that.