If gaming were a religion, it would vary in practice and observance from person to person. In my case, I’d model it closely to the faith with which I have the most experience, Catholicism. I’d recognize my own Holy Trinity of Gaming — the triumvirate of Mega Man, Contra, and Castlevania, three distinct franchises that encapsulate all the values I hold dear.

So strong is my reverence that that it trickles down and extends to all the other games that have been directly inspired by the Trinity. I’ve kinda made it my mission to seek out these disciples and judge whether they are true prophets or self-serving pretenders. There’s really a fine line between hat tipping and straight-up ripping off.

Soul of Darkness caught my attention when it appeared on DSiWare last week. A Castlevania-lite for five bucks was too good of a deal to pass up, any game preaching from the Book of Belmont deserved at least a minute of attention. Too bad it ended before its minute was up. 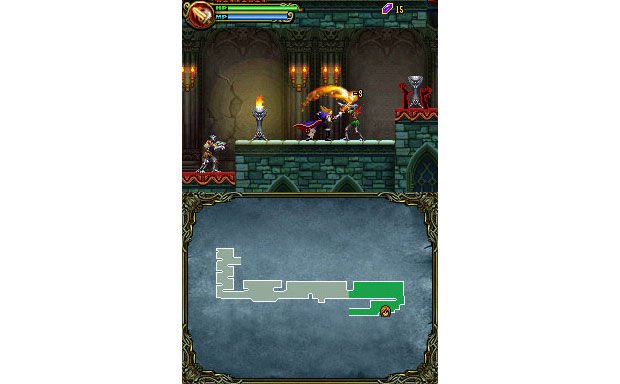 Like all of Gameloft’s home console releases, Soul of Darkness is a port of a mobile game, specifically a slightly enhanced, two-year-old cellphone game. The total domination of the iPhone in the mobile space has forced app development into high gear, turning the hardware into a robust platform. When it comes to vanilla cellphones, however, there are still many roadblocks that keep gaming in the ghetto. Even if these titles find new life on dedicated gaming machines, many of those limitations will fail to be addressed.

Such is the issue with Soul of Darkness, a game that shows great promise but ends too damn quickly. I wouldn’t have been as nonplussed had the roughly two-hour playtime been extremely feature-packed, but it blows what little load it carries before the end of the first half.

You are Kale, a vampire hunter on a quest to rid your amnesiac girlfriend Lydia of her nightmares. A bad ol’ vamp named Ritter who claims to know Lydia personally suddenly swoops in and kidnaps her, and thus your adventure begins. It’s a bare bones framework that recalls the simpler days of 8- and 16-bit Castlevania before the timeline became a convoluted web of hasty retconning. 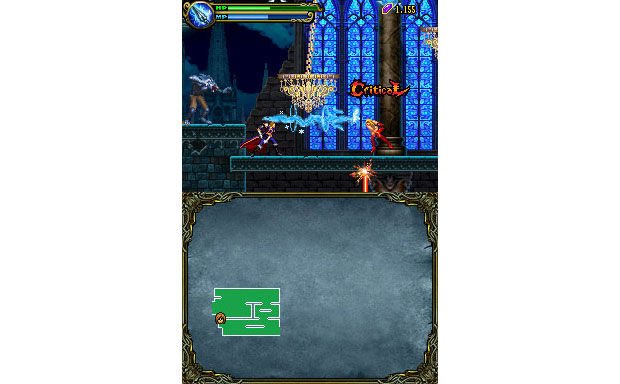 Borrowing much from the post-Symphony of the Night era, the sprite and background art are rich in color and detail. There are a few enemies that look and behave exactly like their Castlevania counterparts, including imps and succubi. You break statues and secret walls to uncover items. The bottom screen display’s the current stage’s map. Even Kale’s movements are animated similarly to those of Alucard or Soma, right down to the delayed body turn when changing direction.

All the humanoid characters sport what I like to call the “Konami Mannequin Head.” In many of Konami’s sprite-based games including Metal Gear and Contra, the small size of character sprites meant that facial features would be hard to distinguish and thus were not added. This design quirk wasn’t unique to Konami, but I most associate it with that company and in particular Castlevania, a series that for the past two decades has maintained a relatively unchanged aesthetic.

The game teases a grand skill set but doesn’t deliver. You start with a flame sword and later gain an ice spear, then you enhance their strength and magic attributes by infusing them with purple souls from fallen enemies not unlike Onimusha or God of War. There are no other weapons aside from these two, making the enhancement system feel underused. You also have the ability to transform into one of three monsters but only in rare designated areas, another unfortunate waste of potential. 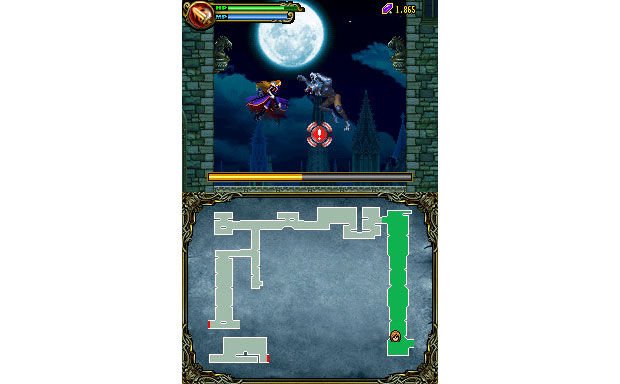 On the other hand, the focus on small set of moves keeps the game running at a brisk pace. The eleven levels are surprisingly varied — there are water spouts that you freeze into ice platforms, laser traps that you navigate by blocking the lasers’ paths, and a forced scrolling level during which you ride on an angelic swan. Hell, a couple of boss battles feature cinematic quick time events! Imagine that! Normally, I’d be up in arms over QTEs, but they are used here sparsely and to great effect.

For a laugh, you can use the DSi’s camera to paste your face over any of the character portraits used in cutscenes. The camera also comes in handy at special booths that reward you with souls, health, or magic if you take a photo that is predominantly red, green, or blue respectively. This latter function is a bit temperamental, requiring perfect lighting conditions — I took a close-up photo of a house plant and the game wouldn’t recognize it as green! I found that the best way to cheat the system is, if you have access to a computer, fire up a paint program, use the bucket tool the fill the whole screen, and snap a shot. BAM! Suck it!

Though progress is swift, jumping is floaty, enemies lack agility, and all action in general feels sluggish. I’m positive that this is another holdover from the game’s cellphone days. Considering how cumbersome it is to play anything on a keypad, the game would have to be tailored with awkward button placement in mind. Apparently, the code wasn’t properly adapted to the DSi, and the challenge is lower than it should be as a result. 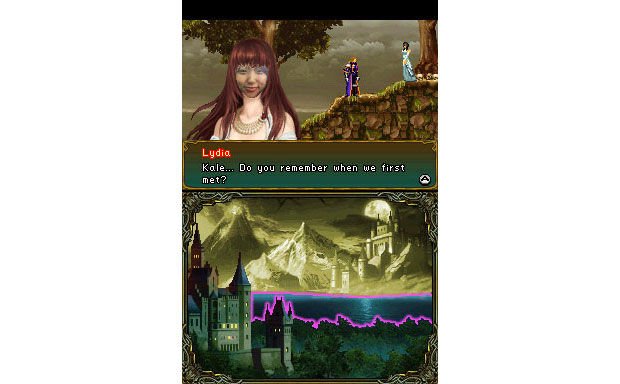 The game is just way too easy. As in Castlevania, levels are split into rooms that are a few screen lengths in width or height. Should you die, you will be sent back to the start of either the current room or the previous one. The enemies you killed return and your soul count drops to pre-checkpoint levels, but your health and magic are restored. Since you have unlimited lives, death is essentially free of any consequence. In fact, if you are running low on health or if you made a room’s puzzle impossible to solve, you can select “restart” from the pause menu to insta-kill and rejuvenate yourself! It’s an invitation to brute-force your way through the adventure.

After a disappointing final boss who doesn’t even have the courtesy to whip out a second, more beastly form, you are given the option to replay the game on so-called “hard mode.” The enemies deal slightly more damage, but since you are allowed to carry over your leveled-up weapons and health/magic upgrades, the net challenge increase is zero. With no other rewards of features to speak of, you are done. How unbelievably anticlimactic.

You are holding a Nintendo DSi in your hand. You have access to three real Castlevania games, all available used for less than a twenty spot and packed with more than ten times the juice. Why should you bother with crumbs that provide no nourishment when there’s a feast waiting in the next room? Are those unused DSi points burning that deep a hole in your pocket?

In all honesty, Soul of Darkness is a decent game that adequately captures the gothic spirit of the Castlevania franchise. Unfortunately, its failure to expand upon promising game mechanics, its criminally short playtime, the absence of any real challenge, and the lack of compelling replay value make it hard to recommend. I wouldn’t give it the time of day if it was priced any higher, but for five bucks, it’s a nice diversion for a lazy afternoon.