Sonic the Hedgehog is still driving a car. 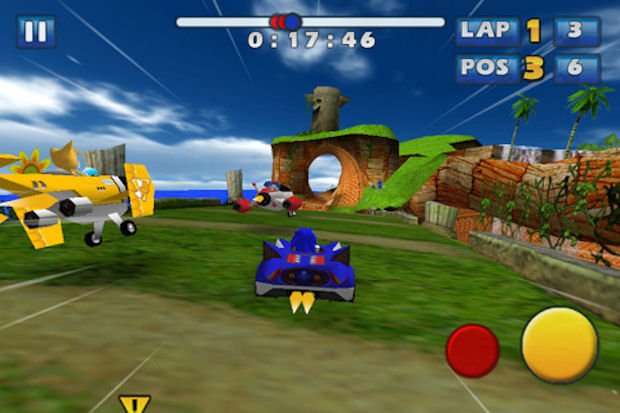 Sonic & SEGA All-Stars Racing is essentially a port of the console versions of the game, albeit with a few tweaks to make it work on a touchscreen device.

As with most racers on the iOS platform, acceleration has been taken out of the hands of the player, with vehicles automatically driving. The player’s main job is to steer their racer using tilt controls. All-Stars Racing does a pretty good job of utilizing these controls, and I’d say it’s actually one of the more refined racing games on iOS. SEGA has been known for some rather disappointing mobile ports, but it has to be said that All-Stars Racing works very well indeed on your iDevice of choice.

As well as steering, players can touch a red “button” to brake and reverse or a larger yellow “button” to drift. Drifting is the key to success in All-Stars Racing, as once you let go of the yellow button, they’ll get a short speed boost which can prove essential to winning a race.

Like all good “kart” style racers, there are a number of power-ups to help players along the way. Some of them, like the boxing glove projectile, are fairly useless while homing rockets, traffic cones, and vision-distorting rainbows can be deadly when used efficiently. When lagging behind, a lucky racer might also find an All-Star power-up, which gives them a unique method of catching up to the other racers — Sonic can become Super Sonic, for instance, while Ryo Hazuki will temporarily trade in his motorcycle for a forklift truck. 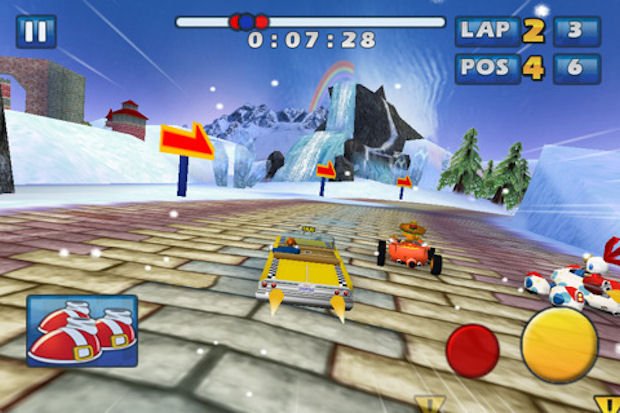 There’s plenty of fan service on offer, with characters such as Sonic, Billy Hatcher, Beat, Ryo and even an adorable Chu-Chu Rocket mouse available to race. While not quite the celebration of SEGA’s past that SEGA All-Stars Tennis was, there’s still plenty for fanboys to dribble over.

As both a port and a game in and of itself, Sonic & SEGA All-Stars Racing is a pretty damn good portable racer and will easily provide some quick entertainment that’s easy to jump into. That said, a number of courses do hold the game back. Any track based on House of the Dead, for example, is simply too dark to enjoy on a mobile screen, especially since there’s no in-game option to raise the brightness. These tracks also seem fond of pitfalls and walls which are almost impossible to see in the darkness. A few later courses rely on gimmickry and traps a little too much, and some are just a mess of poor design, with dead ends and winding layouts that can only be navigated through trial-and-error. 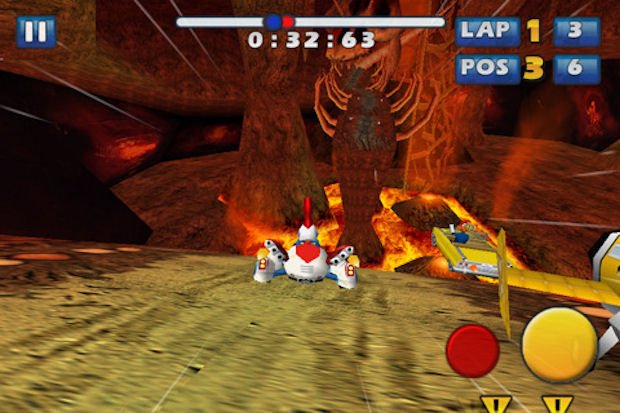 It needs to be said that the game is missing some characters as well, with the likes of Ulala, Knuckles and more strangely absent. While there’s still enough content to justify the asking price, the omission of some popular SEGA characters is a little disappointing.

For the most part, however, All-Stars Racing is a fun game that looks beautiful on the small screen and has a range of solid music. With the ability to spend “SEGA Miles” on new courses and racers, there’s also plenty of content to uncover for those who get into it. For five bucks, you get a rather high quality game with a potential couple hours of gameplay. Despite the moments of frustration, it’s a fun little game that works surprisingly well for a mobile SEGA port. That’s good enough for me!