While it’s still popular to suggest Sonic the Hedgehog hasn’t had a decent game in decades, this generation alone has at least shown significant improvements. Sonic the Hedgehog 4 was an enjoyable, if controversial game, while Sonic Generations remains a genuinely great experience that finally nailed the 3D gameplay Sonic Team’s been so thoroughly challenged by.

Unfortunately, Sonic Team’s biggest struggle is with its need to constantly reinvent the Sonic formula, even after it’s found something that works. Following Generations, we are already seeing a dramatic shift in style, this time to a game that scraps much of what has defined Sonic’s 3D games, and embraced something far more akin to Mario’s latter day console adventures.

After years of rivalry against Nintendo, it’s amusing to see Sonic Lost World liberally, shamelessly steal from Mario Galaxy. However, while Lost World isn’t a patch on the Galaxy games, the art of theft works considerably in Sonic’s favor. Indeed, this game may very well be onto something. 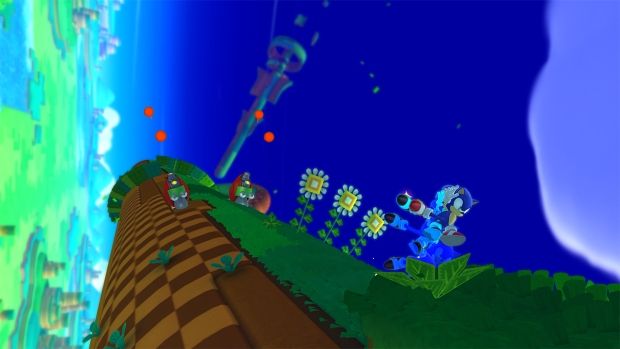 The hardest thing to get used to with Sonic Lost World is the concept of speed not being everything. After years of shifting away from intricate platforming in favor of lengthy, linear race tracks, Sonic Team has reintroduced the idea of speed as a reward rather than a central premise. There are moments where Sonic races along pathways and reaches super speeds, but trying to play most of the game with that “Gotta go fast” mentality will lead to trouble. Learning when to slow down is crucial.

Rather than automatically run at high speeds, players must now use a sprint button, otherwise Sonic will walk at a more leisurely pace. Levels are packed with platforming sections, hidden areas, and other obstacles to create a game far more in line with original 16-bit Sonic titles, even when played from a 3D perspective. In a clear nod to Mario Galaxy, many of the levels consist of disconnected landmasses with their own center of gravity, allowing Sonic to walk the full way around them and shift the camera’s perspective. Many of these levels can indeed be raced through in a manner akin to Sonic Adventure or Generations, but to do so would be to miss out on a lot, and sometimes make progress harder.

[Watch this space for our official video review — coming soon!]

Sonic also has access to a whole bunch of extra tricks which work surprisingly well. The classic spin dash is back, and the homing attack comes in a jump and kick varieties, with enemies requiring different tactics to beat. Some opponents will need their own projectiles kicked back at them, while others might need to let their guard down before taking a hit. While the homing attacks are still messy at times, and often drag players unwillingly into trouble (thanks to double jumps and attacks sharing one damn button), the added variety in attacks, and the need to switch up tactics, makes combat more interesting than the usual button-mashing seen in other contemporary Sonic games.

Some light parkour skills have been added to Sonic’s skillset, allowing him to run along walls, automatically flip over small ledges, and perform more intricate walljumps. He can bounce down swiftly, akin to using the bubble powerup in Sonic 3, and he can crouch for reasons I’ve not yet understood. It takes a short while to get a handle on how everything works, but once you get used to Sonic’s initially odd behavior whenever he’s sprinting near walls and obstacles, it’s surprising just how elegant the parkour actually is — the fact it’s mostly optional and never hamfistedly shoved in the player’s face certainly helps! 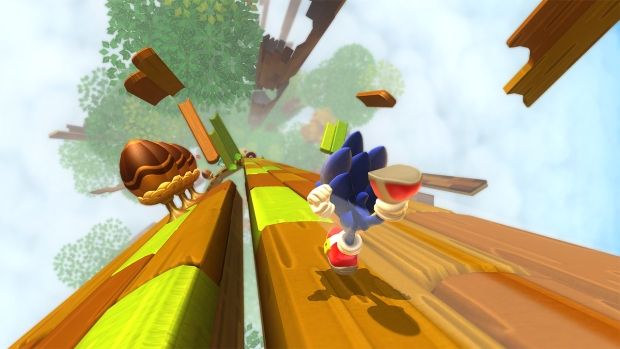 The Whisps from Sonic Colors make their return, and once again bestow unique abilities upon Sonic when utilized. After collecting a Whisp, Sonic can activate it by pressing an icon on the GamePad’s touchscreen, and enjoy some sort of gimmick-infused way of navigating a level. For example, the classic blue variation allows players to flick the touchscreen and send Sonic whizzing across a section of level. The orange Whisp turns Sonic into a rocket which can be aimed at new platforms using gyroscopic controls. For those worried about the game becoming nothing but a tech demo, Whisps are surprisingly uncommon and understated in their appearances. In fact, they can often be optional, and their use is not as abrasive as other games with enforced touch/motion controls.

Sonic Lost World most certainly requires some acclimation on the part of the player. In fact, I despised it when I first started, and it wasn’t until I got used to the subtle intricacies and replayed a few levels with a fresh perspective that I found myself having a ton of fun with it. Levels mostly work great with the new gameplay, boast excellent setpieces, and use speed as a reward to satisfying effect. Lost World is also pretty damn good as both a 3D and 2D platformer, with the controls and physics shockingly adept at both types of gameplay — very useful, since some stages shift constantly between the two styles to great effect.

In fact, Lost World has some of the best level design in the entire series, presented with a sense of cohesion and fluidity that Sonic Team has so very rarely displayed any aptitude for. Whether you’re zipping along a series of tube-shaped worlds, navigating some tricky sidescrolling sequences, or tackling the Deadly Six in a selection of simple but energetic boss battles, there’s a whole lot to love, provided you can get into the new way of playing. 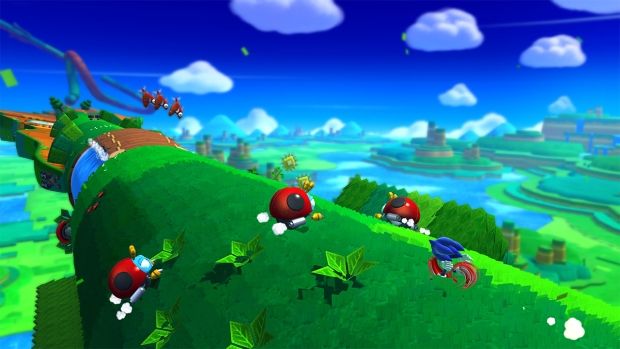 However, this is a Sonic the Hedgehog game, and it seems we can never have one of those without a few massive caveats. For indeed, while Lost World boasts some of Sonic Team’s best ever work, it also boasts some of its worst. As usual, problems occur when the game tries to be too clever for its own good and deviate from what is guaranteed to work. So it is that the game is packed full of some gimmicky, poorly designed crap that threatens to tear down all the goodwill earned by its quality moments. Whoever designed the flying levels, for example, ought to be institutionalized, and there are regular sections that see Sonic bouncing awkwardly across tiny clouds with a camera that provides a woefully misleading perspective.

While the notable majority of levels are polished and fun, there are unintuitive and sloppily designed ones that consistently threaten to rear their hideous heads. To Sonic Team’s credit, it stole something else from recent Mario games — the ability to skip sections if you fail enough times. After several deaths, a set of wings will appear as a pickup, whisking you to the next checkpoint. It’s not necessary for most of the game, but during those sections where awful camera angles or ill-conceived ideas screw over the player, they might present a valid option. 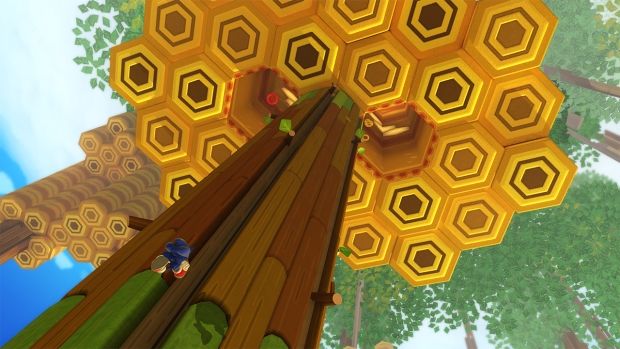 Another long-running issue also dampens the overall fun — the gauche demand for levels to be replayed before new ones will unlock. Lost World keeps a running tally of animals rescued from enemy robots or Eggman pods, and new levels won’t unlock until you’ve collected enough of them. You can get through much of the game without worrying about it, but once you start hitting latter stages, the requirements ramp up and you’ll most likely be forced to play through previous stages until you reach the arbitrary score. There’s absolutely no reason for it; it’s there purely to extend the running time through artificial means. It’s fortunate that many levels are good enough to withstand multiple runs, but it’s still a tacky and underhanded thing to do.

Lost World, like so many Sonic games, has caused me to yell in anger and give up in frustration. Unlike most of the “modern” installments, however, it’s also regularly thrust itself back into my favor with excellent level structuring and excitingly paced action. For every awful segment that fails, there are at least two that succeed. While I have snarled angrily at the game, I’ve smiled with delight a lot more. I must once again emphasize that the game’s new attitude takes some warming up to, but as soon as it clicks with you, it’s hard to hate. 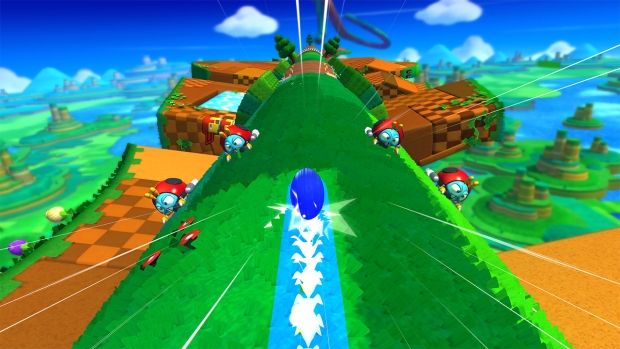 It helps that the game is beautiful to look at, carrying nostalgic visuals that blend the modern with the retrospective. Most of the enemy robots are redesigned from the classic Genesis games, while environmental details are culled from some of the best in the series. However, each Badnik or setpiece has been given a significant enough overhaul to become much more than cheap callback fodder, and there are enough original ideas on display to show off exactly how much thought and care went into the aesthetic style. The Deadly Six, Sonic’s new antagonists, are wholly representative of this, each one boldly realized and unlike anything the series has shown us before, yet appearing to fit right into the world seamlessly — certainly a far cry from the dark and brooding creatures the series has so often tried to clumsily shoehorn into Sonic’s bright and colorful universe.

The soundtrack, however, is the true star of the show. Featuring a selection of incredible, highly memorable tunes, Lost World‘s music is highly infectious and once again evokes a sense of nostalgia while remaining wholly original. Whatever they were doing to pull these fine tracks out of the woodwork, they need to keep doing it! 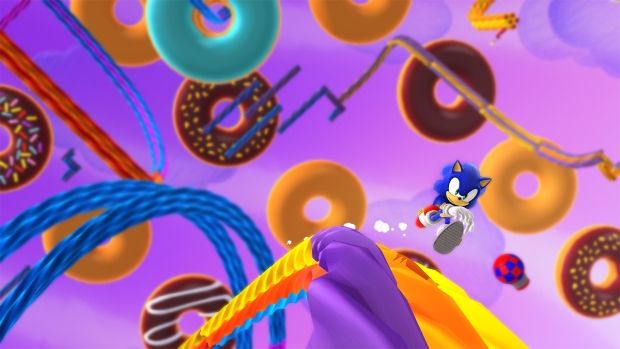 Sonic Lost World can wildly swing from brilliant to horrific at the drop of a hat, but when one steps back and takes a look at the whole production, one sees far more to love than hate. Certainly, the nastier elements prevent it from being the truly great installment it could have been, but the experience is good enough to where I would desperately entreat Sonic Team to keep doing what’s been started here. Please, no more desperate shifts in tone and level design, no more dramatic new overhauls. On a fundamental level, Lost World absolutely nails it, and does what Sonic should have been doing a long, long time ago.

All it needs is time to refine, and Lost World could become the start of something beautiful.