Sonic the Hedgehog has not had the most celebrated of careers. While his early games are regarded as iconic and influential, an amazing run of mostly bad games in latter years reduced SEGA’s mascot to little more than an irrelevant joke. At that point, there’s only one thing to do — release a “best of” compilation!

Sonic Generations takes a number of the very best stages from across Sonic‘s 20-year history, as well as a few of the not-so-good, and completely remakes them with new content. Furthermore, a second hedgehog is along for the ride, but it’s not some horrible silver one from the future!

What could go wrong with any of that? 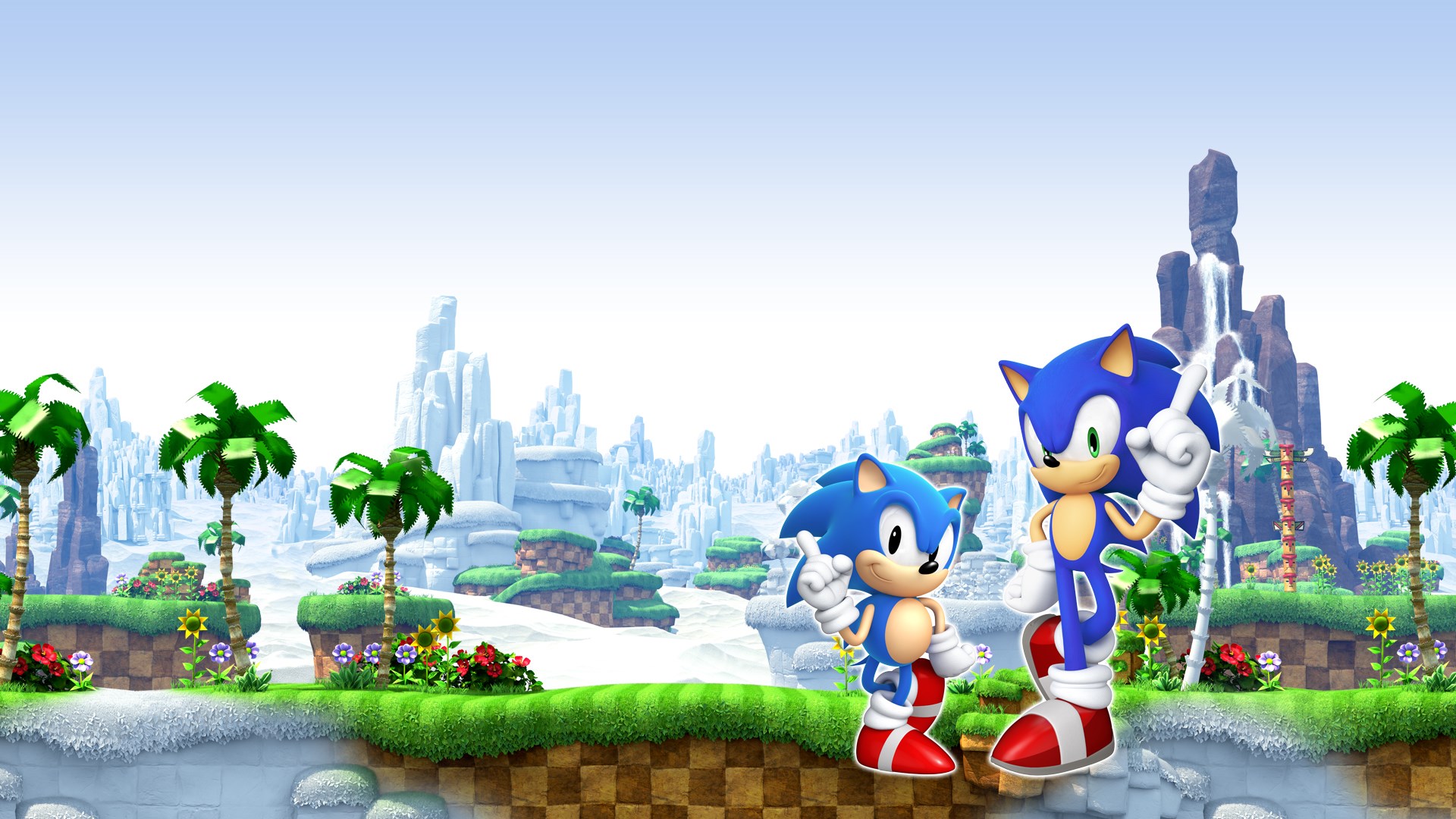 Sonic Generations teams Sonic the Hedgehog up with none other than Sonic the Hedgehog — the long-legged Sonic of recent years comes face to face with his pot-bellied past self. When a grinning monster called the Time Eater starts ripping through reality, elements of Sonic’s past become erased and the two hedgehogs cross paths. Naturally, it’s up to our furry duo to save the day. By racing through famous Sonic stages at top speed, “Modern” and “Classic” Sonic are able to put time back on track and end the Time Eater’s mysterious plans. It’s not exactly the most sensible of stories, but it’s certainly no worse than what we’ve seen in recent Sonic titles. Packing plenty of self-referential jokes and a glorious “twist” at the end, it’s at least an entertaining little adventure.

There are nine main chapters, each based on well-known stages in Sonic history. From Green Hill Zone all the way to Planet Wisp, every console era has been represented quite nicely. Every chapter has a “Classic” and “Modern” variant, with Classic Sonic dashing across sidescrolling platform levels and Modern Sonic racing through 3D-oriented stages. To progress through the game, you’ll need to play each stage with both Sonics, making for 18 stages in total.

Classic Sonic is presented almost exactly as he was in his Genesis heyday. The spin dash is back as well as Sonic’s inability to home in on enemies — he’ll need to manually bounce on their heads. His stages, slower-paced than the Modern levels, focus on intricate, old-school platforming. The only modern concession is the ability to automatically spin dash with the press of a button, something the purists may hate but that I find aids the flow of the game. If it’s a big deal, one can easily spin dash the old-fashioned way by ducking and hammering the jump button.

For nostalgic fans, Classic Sonic is a pleasant return to form. However, there seems to be a problem with his jumping as many of the platforms are far-flung, making crossing wider gaps feel unnecessarily tricky. Either Sonic Team needed to make him able to jump further or these platforms should have been brought closer together. It’s not like any of the jumps are completely impossible, but they can get exasperating if one doesn’t nail a running leap absolutely perfectly.

It also doesn’t help that the game has a habit of placing enemies just far enough across from gaps that Sonic will land on the ground and uncurl a split-second before he touches them, consequently taking damage. These instances feel like real cheap shots that, while not severely damaging to progress, grow increasingly annoying, especially in the latter stages where this issue becomes more rampant.

In truth, I have to admit that the Modern Sonic levels are actually more fun. While there are some truly enjoyable 2D stages, the contemporary variants are almost always more exhilarating thanks to their sheer intensity. Such highlights include an explosive new take on the Chemical Plant Zone and an utterly gorgeous Speed Highway level. All told, there are surprisingly few duds compared to the overwhelming majority of bad levels seen in most of the recent titles.

That isn’t to say that duds aren’t there, of course. Seaside Hill is a sloppy mess of awfully designed platforming and Planet Wisp is repetitive and slow. As for Crisis City? The fact that it was allegedly a highly demanded level only seems to prove just how demented the Sonic fanbase has become, since it’s still the same sprawling mass of ill-placed chasms and confused homing targets that it always was. Still, I remain shocked by the fact that the ratio of good to bad stages is stacked in favor of the positive, marking a revolutionary step forward for Sonic’s retail outings.

As well as the main stages, our two heroes will need to undertake “Rival” battles against some famous Sonic characters — Metal Sonic, Shadow the Hedgehog, and Silver the Hedgehog. These are part-combat, part-racing engagements, with a designated Sonic running to avoid the enemy’s attacks before hitting him when he’s vulnerable. Each Rival challenge is surprisingly intense and represents some of the more gratifying moments in the game — especially when giving Silver his well-deserved beatdown.

Every main stage also has a series of challenge courses to complete, and while most of them are optional, Sonic Team couldn’t resist making the completion of at least a few of them compulsory. Fortunately, players will only ever need to complete one challenge from each stage in order to progress through the game, and they can choose whatever one they want using whichever Sonic they’re most comfortable with.

Challenges come in many flavors. Some of them are races against doppelgangers, others require a certain amount of rings to be collected, and others make use of Sonic’s furry friends to complete obstacle courses. Although based on the main stages, many of these challenges are fully realized levels in their own right, some managing to be exceedingly inventive. There’s even a stage where you can summon Tails and use him to fly around a 2D Chemical Plant, just like in the Genesis days!

Skill Points are earned via successful completion of a stage or challenge, then they can be spent on minor enhancements to the hedgehogs. These include increased speed, improved ability to collect lost rings, and even power-ups based on classic Sonic abilities, such as the bubble shield seen in Sonic the Hedgehog 3. A wide variety of music can be unlocked and used in any stage — you’ve not truly experienced the game until you’ve played a level with “Sonic Boom” blasting in the background! 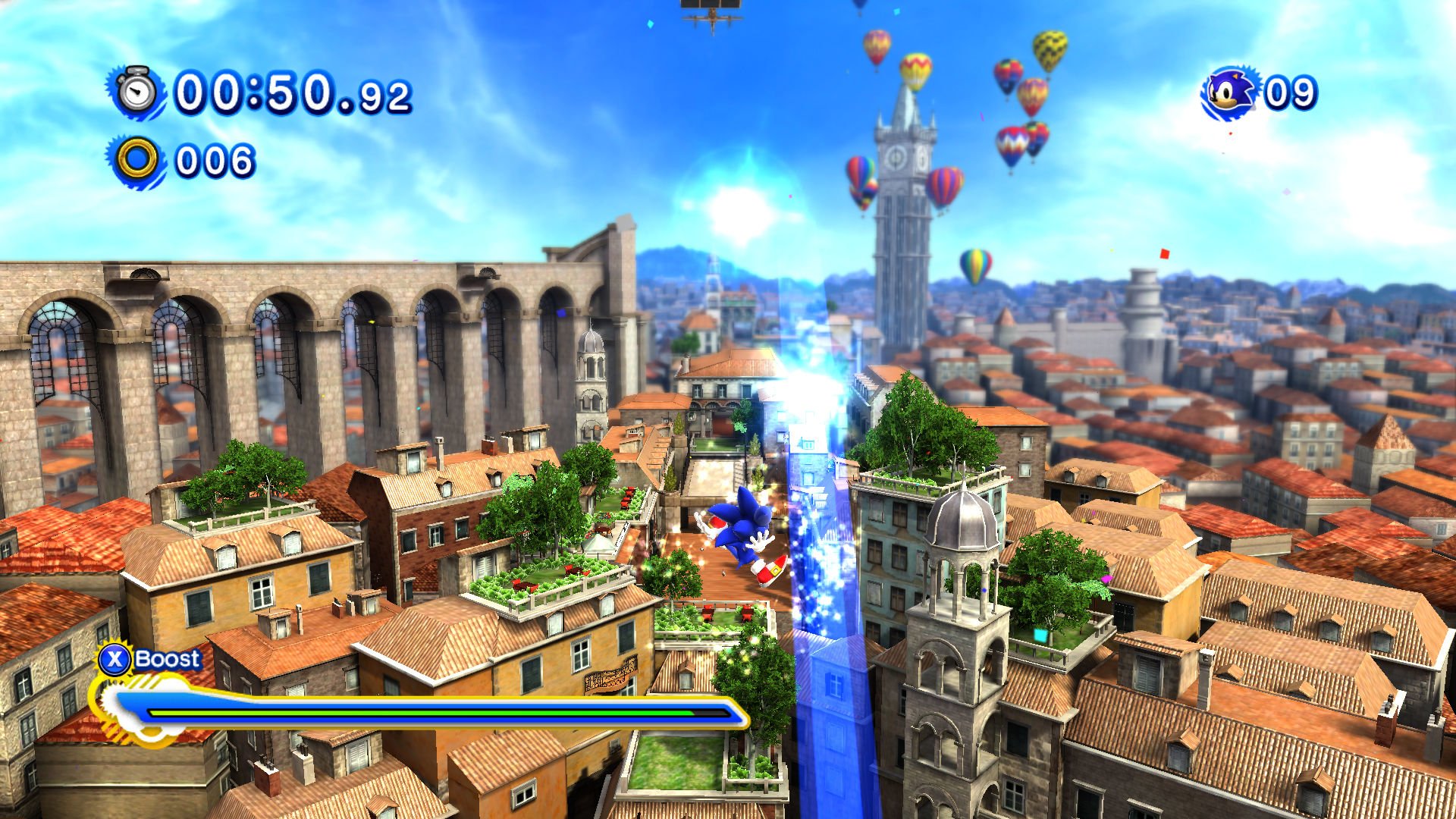 Rounding out the package, there are four bosses, each positioned after three levels and pertinent to a certain “era” of the franchise — Death Egg Robot for Genesis, Perfect Chaos for Dreamcast, and Egg Dragoon for this generation. They feature new twists on famous fights and can be pretty damn epic in scale, though sometimes vague on what you’re actually supposed to do.

As a cohesive package, fans tired of bad Sonic games can’t help but be impressed by what’s on offer. The only consistent issue is that it can be hard to recalibrate one’s brain when switching between Sonics, as the two distinct gameplay styles can become a little jarring. It’s not uncommon to wonder why Classic Sonic isn’t homing onto anything, or why Modern Sonic’s jumps feel so unusual. After a few stages, the confusion abates, but instances of crossed wires may crop up now and then.

Sonic Generations isn’t a very long game — it can be beaten in around five hours or so. Still, there’s significant replay value not just in the optional challenges but also in simply replaying the main chapters. Quite a few of the levels are so much fun that they’re worth multiple revisits, and I’ve found myself spending up to an hour at a time just beating stuff I’ve already played. Finding hidden stars to unlock music and artwork and attempting to gain an “S” rank in each stage provide lots of extra incentive as well.

Nevertheless, it would have been nice to have had less optional challenges and more real chapters. Only having one chapter for each game is a bit of a letdown, especially with titles like Sonic the Hedgehog 2, which had so many brilliant levels to choose from. I can’t shake the feeling that so much more could have been done with the game and that we’re only getting a slice of history rather than a full celebration of it. I just don’t think one level from each game does significant justice to Sonic’s library.

With the Hedgehog Engine still packing beautifully colorful visuals, Generations is a visually stunning game. Seeing the classic levels redesigned in HD provokes huge grins, and even the more recent stages look better than ever. There are a few glitchy moments, most notably in Modern levels when Sonic clips through platforms, but they’re fairly uncommon. Of particular note are the endearing animations, especially for Classic Sonic. Just watching him celebrate during the end-stage results screen is utterly adorable, as is hearing his little feet padding along the grass when he runs. Speaking of sound, the music is gorgeous, with each chapter having two great versions of some incredibly memorable tunes. 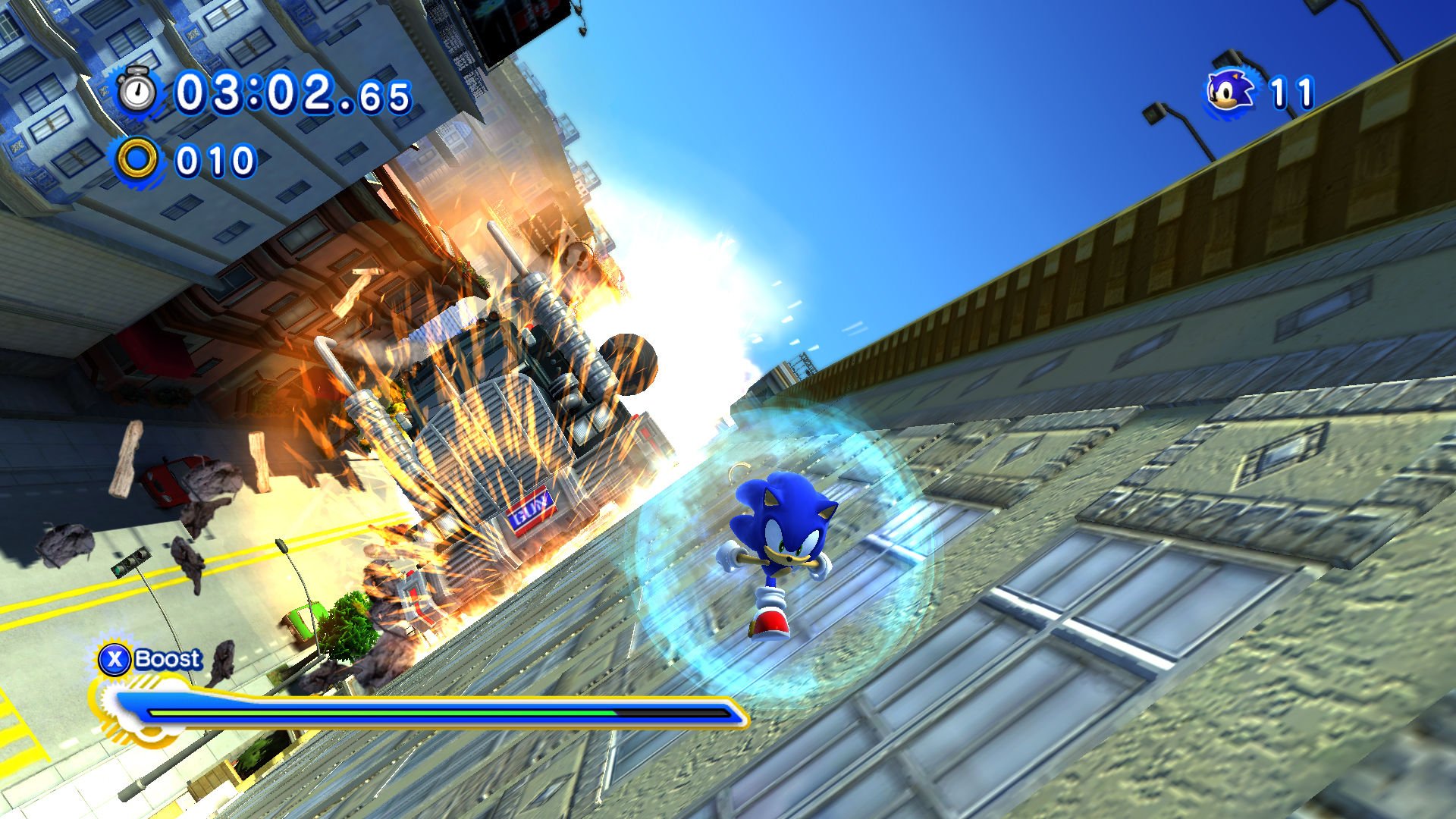 When Sonic Generations fails, it fails pretty horrendously. It’s frustrating to see that, even when faced with some fantastic examples of Sonic done right, Sonic Team still can’t resist doing things wrong. However, as far as recent retail titles go, this is one of the most consistently enjoyable ones released in a while. The moments of failure are significantly outweighed by genuinely fun levels and a handful of borderline thrilling sequences. Only two or three of the main stages are bad while the rest range from solid to downright glorious. They are some damn fine innings for any title.

While it’s not quite the stunning triumph that many had hoped for, Sonic Generations is a truly great game that provides some of the best Sonic action ever seen and pays fitting tribute to Sonic the Hedgehog — highlighting both his successes and his failures. If Sonic Team can keep this up, then the blue blur will most definitely be back on top.