When Disney started rolling out their plans a long time ago for damn near every character in the Star Wars universe to have origin movies, the general reaction was one simple question: Why? Why was this necessary at all? It just seemed a bit needless, delivering nothing.

Well, turns out we were all right if Solo is any indication. Unlike Rogue One it doesn’t deliver much new, doesn’t open up any new characters, and doesn’t hit with much emotional punch. The movie is needless, delivers nothing, and is devoid of almost anything important within the context of the Star Wars universe… and it kind of makes it a total blast.

I really wish that Solo: A Star Wars Story was just a movie called Solo and not a film connected to Star Wars and all the expectations that comes along with the franchise, because without those expectations the film is just one big, fun, science-fiction western full of wonderfully executed tropes and fantastic chases, heists, and battles. The entire movie’s plot is driven by what has got to be one of the most obvious MacGuffin’s in history: Coaxium. It’s a power source…thing…I think. Who cares? Aside from having a name this stuff is basically the glowing suitcase from Pulp Fiction.

The goal of the film is to steal some coaxium. A young Han Solo (Alden Ehrenreich), with dreams of being the best pilot in the universe, escapes slavery on a ship-building planet, leaving his one true love, Qi’ra (Emilia Clarke), behind. He eventually joins up with a crew of thieves led by Beckett (Woody Harrelson), and they must steal some coaxium via a series of stellar set pieces and random contrivances to get to those set pieces. The entire drive of the film is to get from one action sequence to another while dropping in call backs forwards and references to the original films. 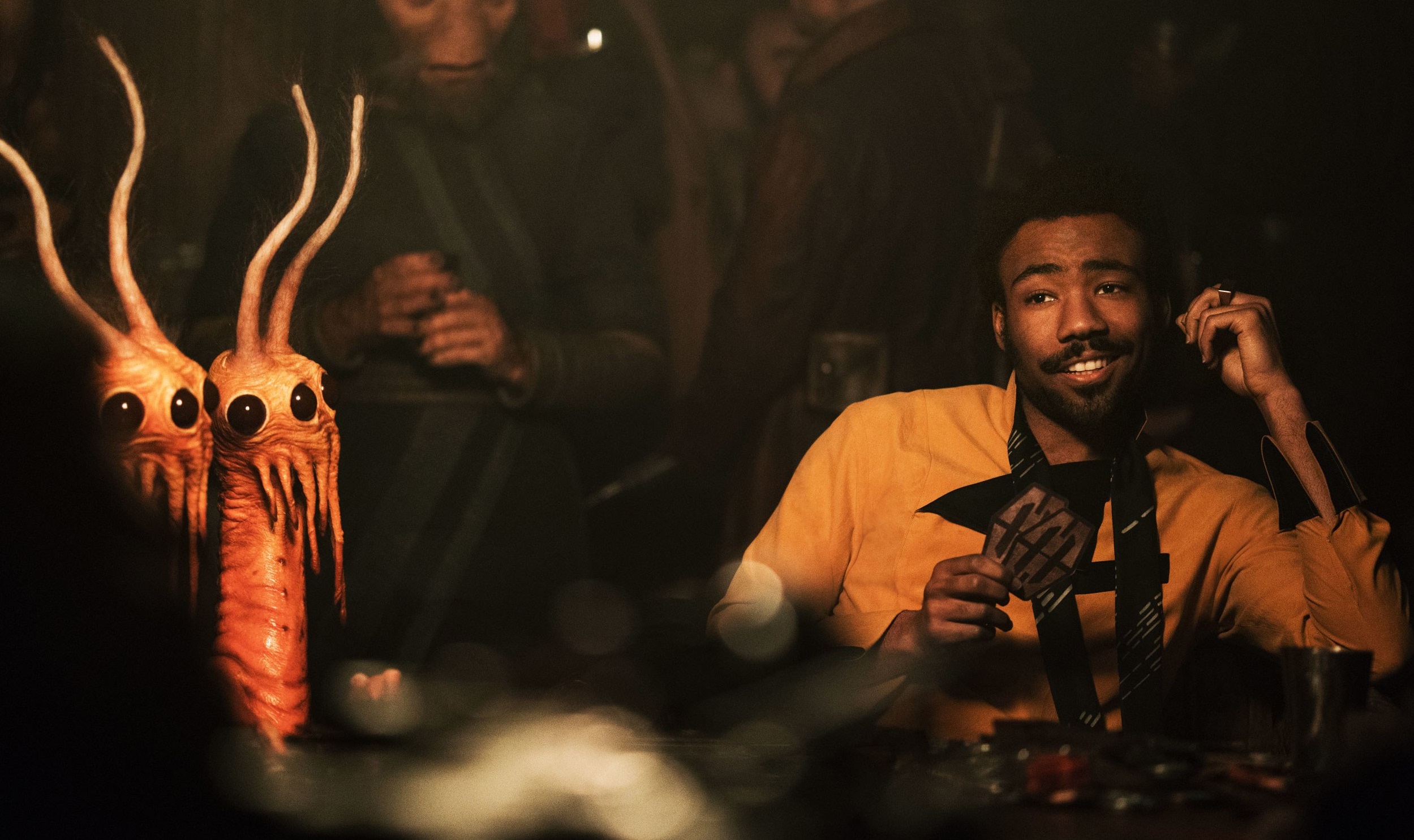 No, seriously, that’s pretty much the entire point. There’s some stuff going on there with a love story between Han and Qi’ra (Emilia Clarke), but man is it hard to care about it at all, especially since we know she isn’t his true true love (#Leia4EVR). Most of the universe connecting things fall into this trap.

How did Lando (Donald Glover) and Han meet? It’s fun, but almost cheapens their relationship.

How did Han get his blaster? Don’t really care.

Oh look, his dice that hang from the Millennium Falcon! OK, that’s a random reason to have them.

Oh, we’re going to show him doing the Kessel Run, huh? You guys aren’t really leaving much for the sequels.

The film is overstuffed with references like this, desperately attempting to tie in with the original films, but spare for a few moments they all fall flat. They’re not needed, and overstuffing the movie with them feels cheap, as if they don’t actually care about them. There’s a few that work, especially one that lands near the end, but overall they’re just pretty useless.

The thing is, this is a blast of a movie without all those Star Wars things thrown in. Science fiction and westerns go hand in hand so easily. Ron Howard knows this and directs the movie like it’s a classic Hollywood western, replete with every cliche character you’ve ever wanted out of one. The train heist from the trailers is one of the better I’ve seen in a long while. There’s a mining heist. There’s a stagecoach chase. There’s even quick draw shootouts. This is everything you want from a sci-fi western, and it’s just plain fun through and through. Howard might not be the edgiest director (possibly welcome by those who didn’t like The Last Jedi), but the man knows how to make a movie.

My biggest concern heading in was the hoopla around Ehrenreich’s performance, and whether or not he was just going to be flat out terrible. He’s not. He’s no Harrison Ford — despite some moments where he does seem to channel the actor a bit — but he’s got the swagger of a gunslinger, and the charm of a cowboy. He works in this movie. Does he work as Han Solo? I’m not sure, which is just another reason I wish this wasn’t a Star Wars prequel. Chewy and him are fantastic together as well, and their meeting and budding relationship is one of the few callbacks that feels natural, and not forced.

Harrelson’s Beckett is spot on for the gruff ol’ cowboy he’s supposed to be. There’s a new droid for everyone to fall in love with, L3, who the movie plays with quite well, and Glover is just resplendent as Lando. Again, though, he doesn’t need to be Lando. He’d be resplendent as Kando or Rando or Mando. A Donald Glover by any other name…

I guess the real question is if being Han Solo and Lando Calrissian makes these characters somehow cooler or better than if they were San Holo and Cando Lalrissian, and I have to think the answer is no. Star Wars itself works on tropes — it’s a space opera with western influences, after all. The characters shine in the originals, yes, but it’s the larger themes that made everyone go crazy over them, not the intricacies of why Han Solo is who he is. The movie doesn’t need Han Solo and Han Solo doesn’t need this movie.

So lets pretend that this is just a movie called Solo, about a loner space cowboy with a quick draw and his hairy sidekick (negating most of my review). Then it’s fun. It’s a blast. It has laughs. Its characters are shallow, but good enough to work. It’s pretty much a simple western with delusions of grandeur and fantastic action sequences. Most of me really loves this movie, but the Star Wars fan inside just can’t.