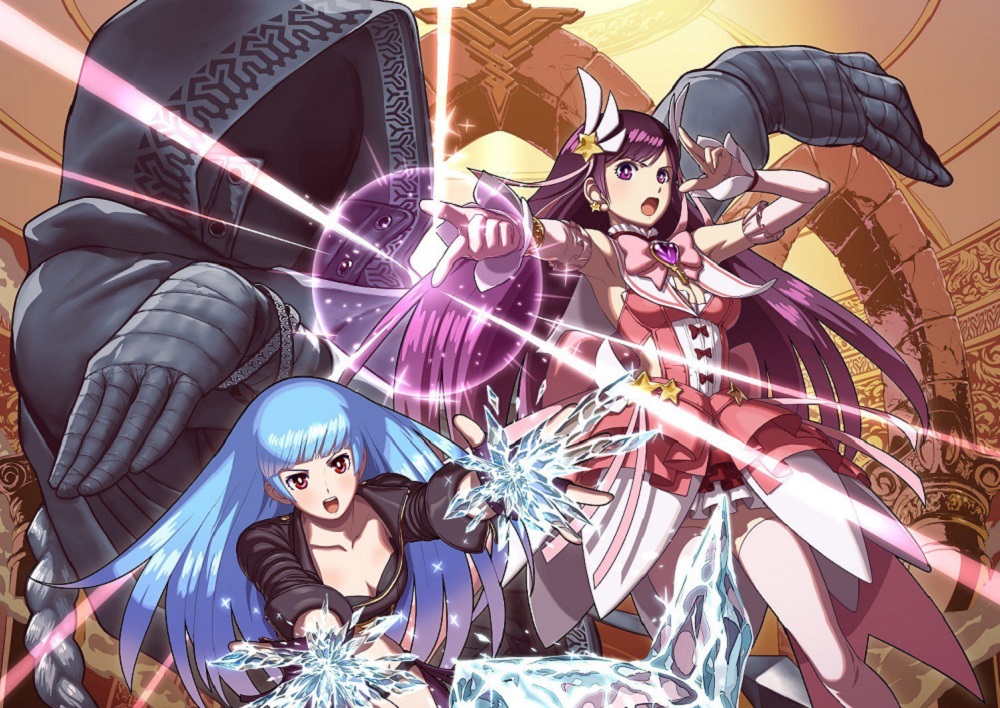 SNK’s roster of fighters have always been a stylish bunch. From Fatal Fury to King of Fighters and even Samurai Shodown, SNK’s guys ‘n’ gals have always thrown down, and looked damn good doing it. This came to a head in the KoF games circa 2000, where characters started looking less like scrappers and more like Harajuku’s street elite.

So what drama it must be for a bevy of SNK’s badass gal fighters to find themselves trapped in a mysterious palace, adorned in garbs that look like they came out of a reject fancy dress store. Worse still, their anger, embarrassment, and shame appears to be fueling some sort of fiendish plan to merge alternate realities… I’m just the reviewer, brothers and sisters.

Apparently, this scenario gives our girls no option but to team up and engage in a series of two-on-two rumbles, with a very sandy end awaiting the losers. Can you help Mai, Yuri, Nakoruru, and Best Video Game Character of All Time Leona Heidern solve this mystery, defeat their creepy host, and escape his devious homestead? Should you even bother trying? Let’s find out as we look at NIS America’s SNK Heroines: Tag Team Frenzy.

Let’s get it out of way, SNK Heroines: Tag Team Frenzy is one of the most simplistic fighting games I’ve played in years. Simpler still than Nicalis’ recent release Blade Strangers. While the two games are very comparable in control, with one-button specials, supers, and auto-combos, SNK Heroines goes even further, removing crouching, lows, and overheads entirely and adding a dedicated block button (in an SNK game? Sacrilege!) that defends against all attacks, bar throws. Designed primarily for the Nintendo Switch, SNK Heroines makes use of both thumbsticks, and thus arcade controllers were originally out of the question entirely (though a day-one patch will now change this).

The player picks a team of two feisty femmes and the pair launch into fast-paced punch-ups with the opposition. Auto-combos are in full effect, with players tapping the attack buttons, then cancelling into special moves. Your team members share a health bar between them, but have their own replenishable meter for specials. To keep things kooky, players can activate special items, from giant bowling balls and poison effects to that comedy stalwart: the banana peel. There is only one way to win the match: get the opposition into the red, then land your super (or “Dream Finish”). No super. No victory.

Because of this basic approach to combat, the key to SNK Heroines lies in movement. Our girls can dash, back-dash, jump, super jump, and air-dash, as well as perform ground recovery and evasive rolls from guard. Almost all combos and specials are unsafe on block, so opening up your opponent is a matter of slick movement, baits, and positioning. The blend of quick tags, short health bars, and auto-combos makes SNK Heroines’ fights frenzied affairs that can be over in seconds. It’s certainly good fun, and the potential is there for extended combos and timed juggles, but it is a linear fighting system, and genre enthusiasts may realise before long that the depth they crave lies elsewhere.

As the hapless heroines fight their way through the mysterious castle, in-game gold is earned. This can be spent on new outfits, artwork, sound samples, and a wardrobe of accessories. It’s a fun idea, and some of the alternate costumes are truly great, but it isn’t a patch on the customisation in fighters such as Tekken. The costumes themselves cannot be altered, and the mode is little more than gluing comical items onto your chosen heroine’s body parts. Once you have your girls wearing their best Elton John glasses, fox-tails, and flashing police sirens, you can have them pose in a studio for a photo shoot, with various effects to highlight your awful couturier abilities.

More choice is offered in the game’s selection of modes. Survival, Training, Combo Trials, and a Tutorial are all on offer, as well as a Gallery and Online Vs. The centrepiece of single-player is a wafer-thin story mode, which features some amusing dialogue, but is over quickly, of zero consequence, and has a hugely unsatisfying climax. The true entertainment value of SNK Heroines lies in local multiplayer, where the chaotic nature of the loud, colourful brawls is sure to bring out the best in you and your buddies. Oh, if you do play single-player, be sure to crank the difficulty up, as on default the brain-dead AI provides little resistance at all. SNK Heroines only truly shines as a party punch-up.

I mentioned in my Blade Strangers review that there was a place in the market for mid-tier fighting titles. Both the former and SNK Heroines fill that role just fine. Neither of them can break out beyond their linear, stripped-down mechanics, but both titles will provide entertainment, played with friends. Of the two titles, Blade Strangers is definitely the better game, but SNK Heroines is the more accessible, and will very likely go down better with non-fighting game players, though it really should be ten bucks cheaper. If you’re on the fence, I’d strongly suggest waiting on a discount.

Though SNK Heroines: Tag Team Frenzy is not the Gals Fighters 2 we may have been hoping for, it is a daft, fast and fun brawler. There is a serious question of longevity to be considered, and veteran players should consider the game’s shallow simplicity before purchase. But in a group setting, especially among newcomers, SNK’s sisterhood of sluggers will get the job done, looking fabulous while doing so.