The appeal of the World War II shooter faded long ago. Medal of Honor, Battlefield and Call of Duty now look to contemporary war zones for inspiration, while other shooters look toward the future (Syndicate). Sniper Elite V2 comes with a twist, however: What if you could snipe Nazis in the balls? Tantalizing, I know.

Sniper Elite V2 is the perfect meeting point between shooters today and shooters a decade ago. On one side, you have a tasteful campaign based around (partially) historical events. On the other, you have gore galore and bloody balls. We can all agree that sniping Nazis in the balls is awesome, but is everything surrounding it equally sound in V2? Read on to find out.

When I think of snipers I think of two films — both set against the backdrop of World War II — Enemy at the Gates and Saving Private Ryan. The latter represents an escort mission of sorts: A sniper picks off a horde of Nazis as his friends down below hold their ground. Sniper Elite V2 has some moments like this. It’s Enemy at the Gates that really makes me excited about the prospect of a sniping WWII game. The film is basically a long cat-and-mouse chase between two snipers trying to outwit each other. This is what I was hoping to find in V2. Here’s what I found instead …

You can’t make a game where you only snipe. Well, you can but that game would have to be called Silent Scope. At its core, V2 is a glorified shooting gallery that spotlights your shots with brilliant presentation and impact. Imagine the slow-mo bullet cam that followed Max Payne’s sniper rifle and combine it with the brutal skeletal damage animations of last year’s Mortal Kombat reboot. The fun of sniping Nazis in the head, organs, and testes never gets old due to this great feedback loop. Unfortunately, it’s all sandwiched between a rather frustrating stealth game. 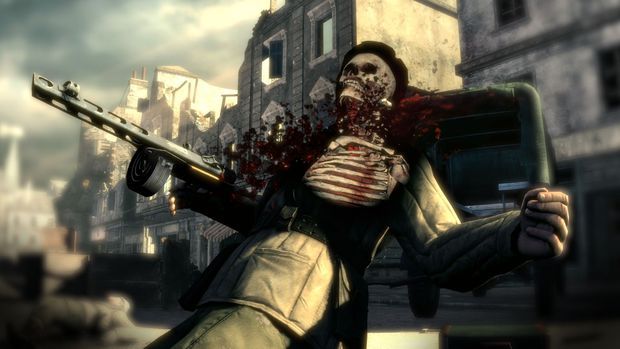 Stealth is the only route that makes sense for a game of this type. After all, it would just be another third-person shooter with a sniper rifle if it didn’t focus on stealth. The problem is that the game feels designed around action with stealth as an afterthought, making for a very frustrating experience at times. Unlike the original Sniper Elite, V2 presents much narrower levels that route you waypoint-to-waypoint, a la Call of Duty. You rarely feel like a sniper trying to get the lay of the land, working toward a vantage point. Instead you feel like a hamster guided by a hand within a maze. You expect an abandoned building to be there for your benefit but instead it’s blocked off. There are some levels that are more open in V2‘s campaign but they are the exception and don’t come until later in the game.

V2 adapts some stealth mechanics seen in many recent games. You can mark targets through your binoculars, which will summon an icon, visible at all times (even through walls), above enemies’ heads . You also have a stealth meter that surrounds your character, indicating the direction of enemies nearby and their level of awareness. Finally, you have a ghost image — borrowed from Splinter Cell: Conviction — that will appear whenever an enemy spots you. Enemies will go toward your last seen position, leaving them vulnerable for a flank attack. All these abilities make the stealth portions bearable, so don’t make the mistake I did and go into the game on Sniper Elite difficulty which takes away all of these features. Thankfully, you can customize the enemy AI, ballistics, and stealth abilities to make the difficulty that suits you.

So, with all these great features you must wondering where the game went wrong? For starters, V2’s heroic US sniper Karl Fairburne walks like he has a stick in his ass. I’ve never seen a slower stealth walk in a game before. It’s unbearable! I frequently broke stealth to suffer the consequences of enemy fire because it was easier to take than a five minute walk across a room. Fairburne is no Solid Snake. He loud, clunky, and awkward — even if he is really awesome at holding his breath and shooting people in the face from a mile away. 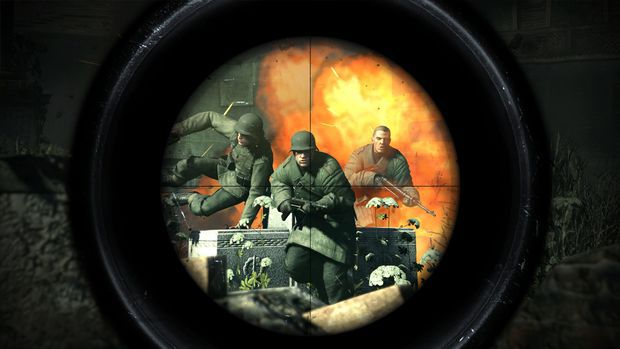 Then there are issues with the enemy AI which is inconsistently mediocre at best. If the Germans were as dumb as they are depicted in V2, World War II could have been won in a day. There are times when you can shoot a soldier with a silenced pistol, wait a couple seconds for him to react, and then kill him near a friend who doesn’t seem to mind. On the other side of the spectrum, the game is filled with enemy snipers and turret gunners who will spot you from a small country away and fire at you with pinpoint accuracy. What makes it even more maddening is that no one else on the field seems to notice. They can be raining bullets on you and it makes no difference to the foot soldiers, yet when you fire a bullet the entire army comes running to your location. The inconsistency in what breaks stealth leads to many irritating scenarios in V2.

Add on some sloppy movement controls, an undependable cover system, and glitches, and you have what is a terrible stealth game. Thankfully, that’s not all V2 is. One clever aspect of the game is the ability to be aggressive in setting traps. As a sniper, you must seek out vantage points, sneak into them, and fortify them with landmines and trip wires. This can be a lot of fun when maps give you enough room for some creative freedom — something all too rare in this game. Most levels give only one way to approach a situation. Stealth is sometimes not even an option. Instead, you are forced to awkwardly face enemies with other weapons.

V2 is at its best when you are going on a sniping spree from the rooftops. Perhaps it’s realistic that you walk very slowly, run very loudly, and are a terrible shot with a machine gun but it doesn’t make for an enjoyable game. Even so, the AI and level design take away what could have been a hardcore tactical experience. This is very much a videogame: One in which debris magically disappears when you pick-up an objective item. 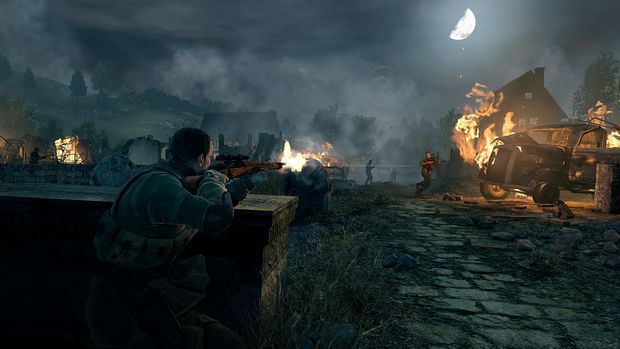 Despite its quirks, I had a lot of fun when I found myself behind a rifle in V2. The sniping is some of the best to ever grace a game. Having to factor in distance and wind makes for a unique sniping experience that has some rewarding payoffs in the game’s brutal death animations — skull fragments and blood spill all over the place! It’s nauseating, yet I couldn’t look away.

V2’s lackluster campaign (story isn’t mentioned here for a reason: It stinks!) clocks in at about six hours. There are four co-op modes you can tackle afterward but none of them are particularly enjoyable. You can play the campaign co-op or survival mode, but the most interesting mode is Overwatch; this game type positions one player as a sniper and another as a foot soldier that spots enemies. It’s a neat idea but it doesn’t work since there is no joy in being a foot soldier with such terrible cover and combat. The PC version has multiplayer, which is absent from the console releases. I have no idea why. It’s a real bummer too because sniping battles could be a really great addition.

V2 is a mixed bag. Even though it makes good on rejuvenating the sniper rifle in videogames and giving players creative ways to fortify their location, it buries it all in one of the worst stealth games to come around in years. But, if you are the type of patient player that can look past a game’s flaws, you may find an enjoyable Nazi testicle shooting gallery in V2.