With technology and entertainment where it is today, it’s easy to forget how much time we spent as children playing mostly with our imaginations. Before ubiquitous screens, we fought evils we conjured in our minds with magic spells only we could see and foam dart guns. My sister and I invented the “burgundy blob,” which came out of our parents’ waterbed, clad in its maroon sheets.

Sleep Tight goes back to that era of pillow forts and monsters lurking in closets. For a specific subset of people, this will feel like childhood. For others who maybe didn’t have a similar upbringing, it’s still a neat little twin-stick shooter/base-builder hybrid. 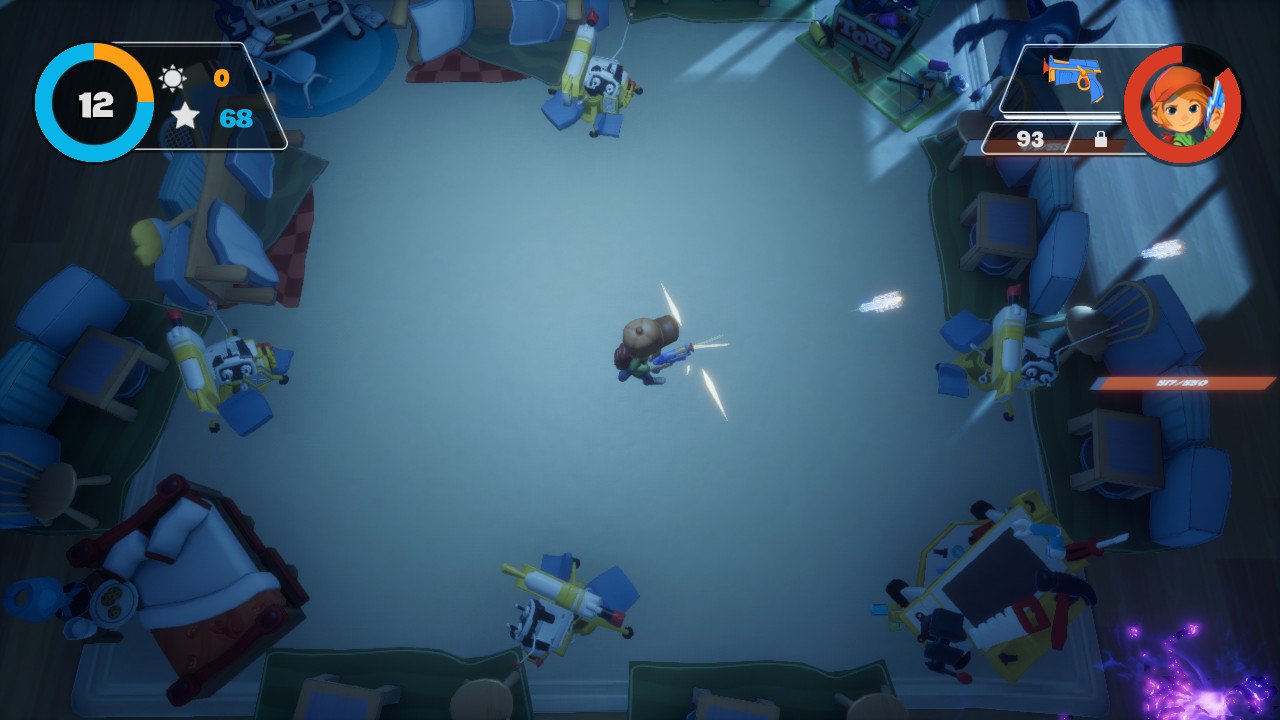 Starting up a run of Sleep Tight drops right into the action. One of the twelve playable characters is set in a dark square room, armed only with a foam-dart pistol, faced with monsters spawning all around. It’s a simple introduction, demonstrating the moving and shooting without a whole lot of danger.

Once the minute-long night is up, it then transitions to a day phase, where players can spend the daylight hours preparing for the wave of monsters attacking during the next night. The day phases aren’t timed, but instead symbolize the passage of time by using sunlight as a discrete resource: take all the time you need to decide how to spend eight suns’ worth and then it’s back to the shooting.

The suns go into the other aspect of Sleep Tight: base building. Spend a few to stack up some pillows and form a wall. After some research, you can start to set up turrets to make the monsters run a gauntlet just to get to you. Eventually, you can get to the point of fending off an entire night’s worth of monsters without ever firing a shot from your own gun.

Or, if you would rather play it as a more twitch action game, you can instead spend suns on ammunition and power-ups, unlocking new weapons and generally making the kid more survivable without worrying too much about static defenses. One piece of smart design here is that players can take as much or as little from either philosophy and still be successful (and indeed, there are different unlocks depending on the different play styles).

Personally, I found the engineer/scientist style to fit me best. Set up a base, don’t spend anything on ammunition, and you may have leftover suns to convert to the other in-game currency stars, which are used to buy upgrades. This turns into what might even be a fault: now that I discovered where exactly I need to place my walls and turrets to force the monster spawns I want, it felt like I could go indefinitely. (That run was terminated when I got greedy and stepped out of the base to pick up stars when I shouldn’t have.)

The monsters get progressively stronger and more numerous, and every ten levels there’s an especially brutal onslaught, so it’s likely my base would eventually fall. But having come up with it on only my third or so run and finding so much success with it, future plays have been a bit rote. And although it’s initially satisfying to build something so effective you don’t even have to move, it does get a little dull two hours into a single attempt. 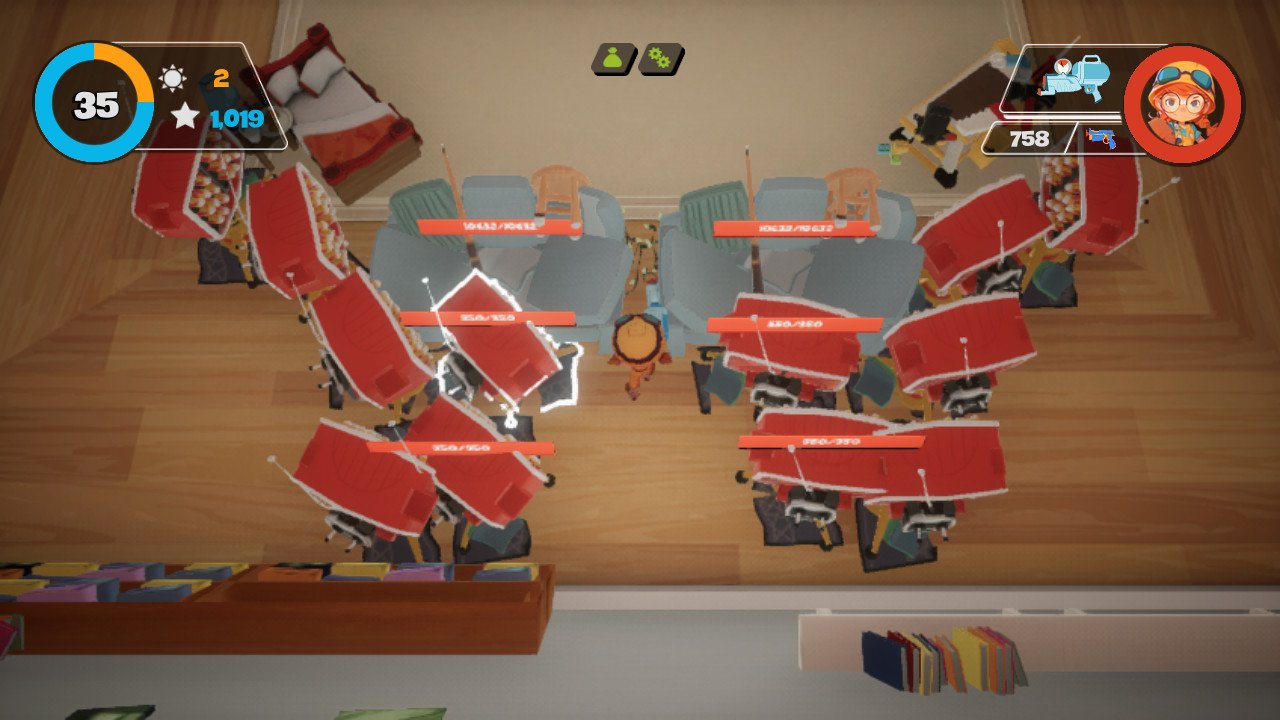 Thankfully, some of the unlockable characters change things up enough to keep it fresh. One places a teddy bear on the map that needs to be defended, throwing a wrench into a player’s typical build plans. Another turns the lights all the way down and gives the kid a flashlight, making the first few levels much more difficult.

It’s worth making a special point to note the visuals of Sleep Tight. It has a very Pixar-like quality to it, like it could have been a Monsters, Inc. licensed game in an alternate universe. The monsters are sharp and pointy, but also kind of cute and snuggly in their own way. I can envision the plush dolls on Etsy right now.

The whole game has a cutesy vibe going for it. After all, it takes place in a child’s bedroom. Some of the upgrades really lean on the theme in creative ways. For instance, memory foam is an expensive upgrade that heals defenses at the end of every night. I chuckled when I thought about it. After a long night of being beaten on by monsters, it springs back a bit in the morning. 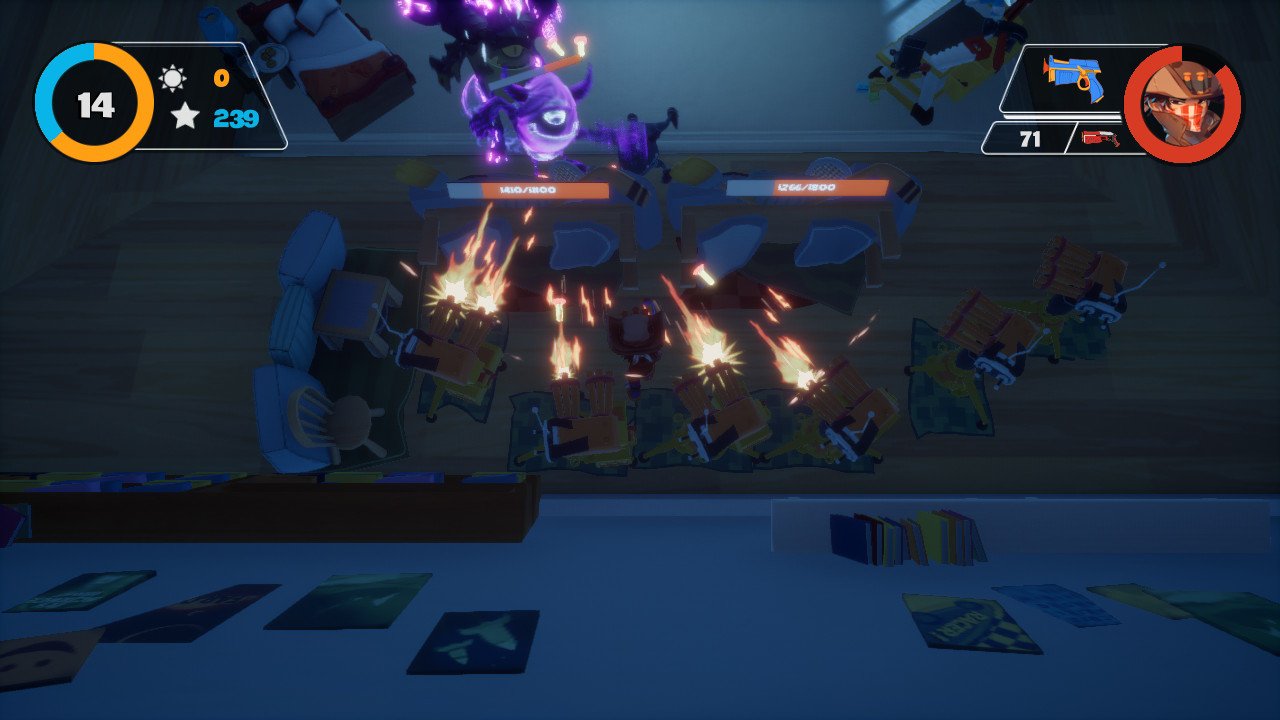 Though Sleep Tight boils down to just another twin-stick shooter, it’s a bit deeper than it looks on the surface, with the characters unlocked later substantively changing the gameplay, but even so I can’t help but feel like it’s missing something that could have pushed it from good to great. I can appreciate that We Are Fuzzy knew the game it wanted to make and kept it in scope, but I would have loved to see different bedroom layouts, additional challenges to change up gameplay, or at least some monsters that behave differently than just running toward the kid and taking swings.

As a run-based, arcade-style score attack game, it suffers from one major flaw in the design. It’s too long to sustain that kind of gameplay. While an unsuccessful attempt can last only a few minutes, most of my good runs lasted about two hours each. It’s the kind of time commitment that pushes me away from the “just one more run” mentality that makes these games successful. And when it does take so long to get far, I wish there were more to earn over multiple tries than just the new characters. Once those are all unlocked, it’s all about getting the high score.

All in all, Sleep Tight is a neat little package. It knows what it wants to do and it does most of it well enough, but it might not excite people who don’t share the same nostalgia for the specific childhood experience described within it.