Alongside complicated and in-depth games in the contemporary market, I tend to enjoy the occasional simplistic gaming affair more than ever. Sometimes, minimalistic games that are nothing more than “hero defeats monster” do more to scratch my gaming itch than anything else.

Sometimes, all it takes is a Knight, a Wizard, and a Thief slashing slimes to bits to really get you going. 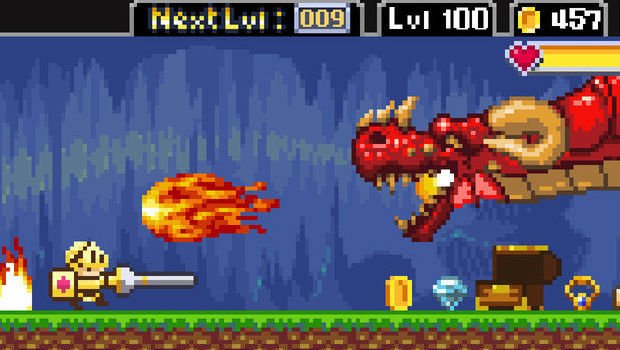 Slayin’ is an iOS release of a free PC game by the same name. This version boasts new bosses, items, modes, leaderboards, quests, and a sweet new chiptune soundtrack (oh that soundtrack).

There’s three characters on offer, all with unique playstyles. The Knight has the ability to jump and essentially joust his enemies to death with a sword from the front — leaving his backside completely open to attack, but with more than enough resilience and power to compensate.

The Wizard (my favorite of the bunch) cannot jump and has minimal defensive capabilities, but has the ability to turn into an invincible tornado in half-second spurts, making him an extremely fast paced and reacted based character. Lastly, the Knave is similar to the Knight, but has weapons protruding from both sides of him leaving him less open to attacks from the rear, but at the cost of a less sturdy frame.

Essentially, you’re running around at will using a giant (and very responsive) digital d-pad, with your actions playing out through the use of a single action button (jump or cast spell, respectively, for each character) in a tiny screen sized horizontal plane. Each enemy you slay will net you experience points, and as you level up in increments of 10, you’ll fight a boss, and the area and enemies will change. It’s as simple as that.

Occasionally a merchant will appear, allowing you to kit yourself out to suit your circumstances, but if you die, you’ll start back from the beginning barring the Fame (currency, essentially) you’ll earn through a traditional challenge system, and your progress during that run.

What I enjoyed most about the game is not only the charm, but the intuitive nature of the enemies I was facing. Much like Spelunky, I found myself eventually adapting and learning the various ins and outs of each enemy over the course of the game, to the point where I actually felt like I was improving, skill-wise. This is especially evident with the Wizard character, where split-second timing is everything. It also helps that aesthetically, it looks like a brighter Half-Minute Hero.

Thankfully it’s not truly endless as there is a final boss, which is a bit of a relief. While I enjoy endless runners more often than not, it’s all too easy to fall into the trappings of a microtransaction-based carrot-and-stick approach; it’s nice to know that this actually has an end and a goal you can work towards. 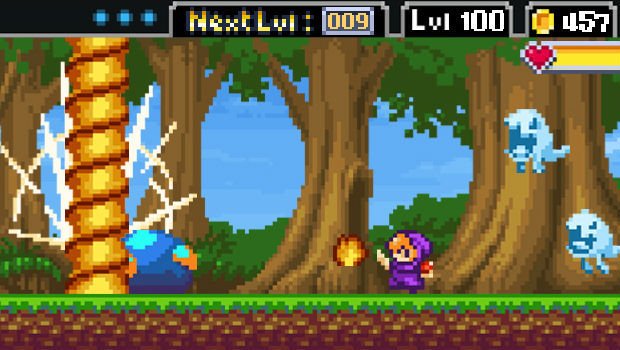 Having said that, the game has microtransactions to buy more Fame so you can purchase unlocks. The good news? Well, they’re not nearly as intrusive as nearly every other game that has them. After buying the game for $0.99, you can pretty much earn everything major there is on offer by playing through as normal; content-wise, there’s the Wizard and Knave characters, an Advanced Mode that starts at level 80 and a Boss Rush mode, and the ability to continue — that’s literally it.

Each round you’ll earn 500-1000 coins, and the most expensive item on offer is the 10,000-coin Boss Rush unlock, with the Wizard unlocking at a scant 3,000. For an IAP of a few bucks, you can basically unlock all of the content instantly, while the rest of the items are all aesthetic (such as new layout designs and new gravestones for fallen heroes).

It’s all extremely inoffensive, and since the game is really fun to play, you won’t mind working your way up to buy the few pieces of content. In other words, it’s a model I can easily get behind and never really hits “paywall” territory since Slayin’ is a skill-based game.

Slayin’ is one of the best games I’ve played on iOS in some time. I’m really glad that it keeps In-App-Purchasing down to a minimum, and delivers enough thrills (retro or otherwise) to justify the meager price tag. If you’re a fan of retro games and prefer gaming in small chunks, give this a shot immediately.