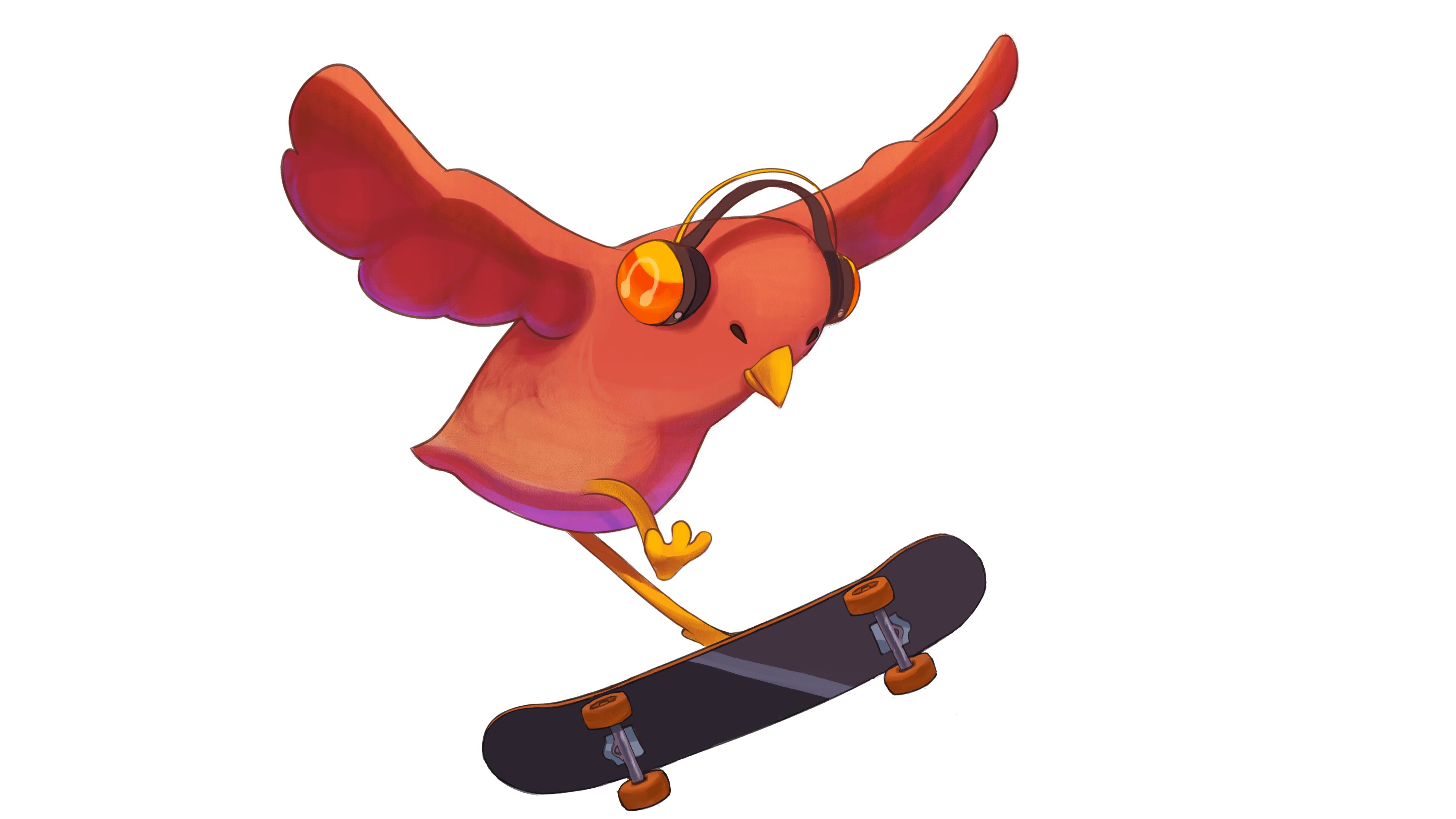 Let’s be honest; you already know if you want to play SkateBIRD. Just look at it. Does the concept of a small bird riding a skateboard appeal to you? Then we’re done here. 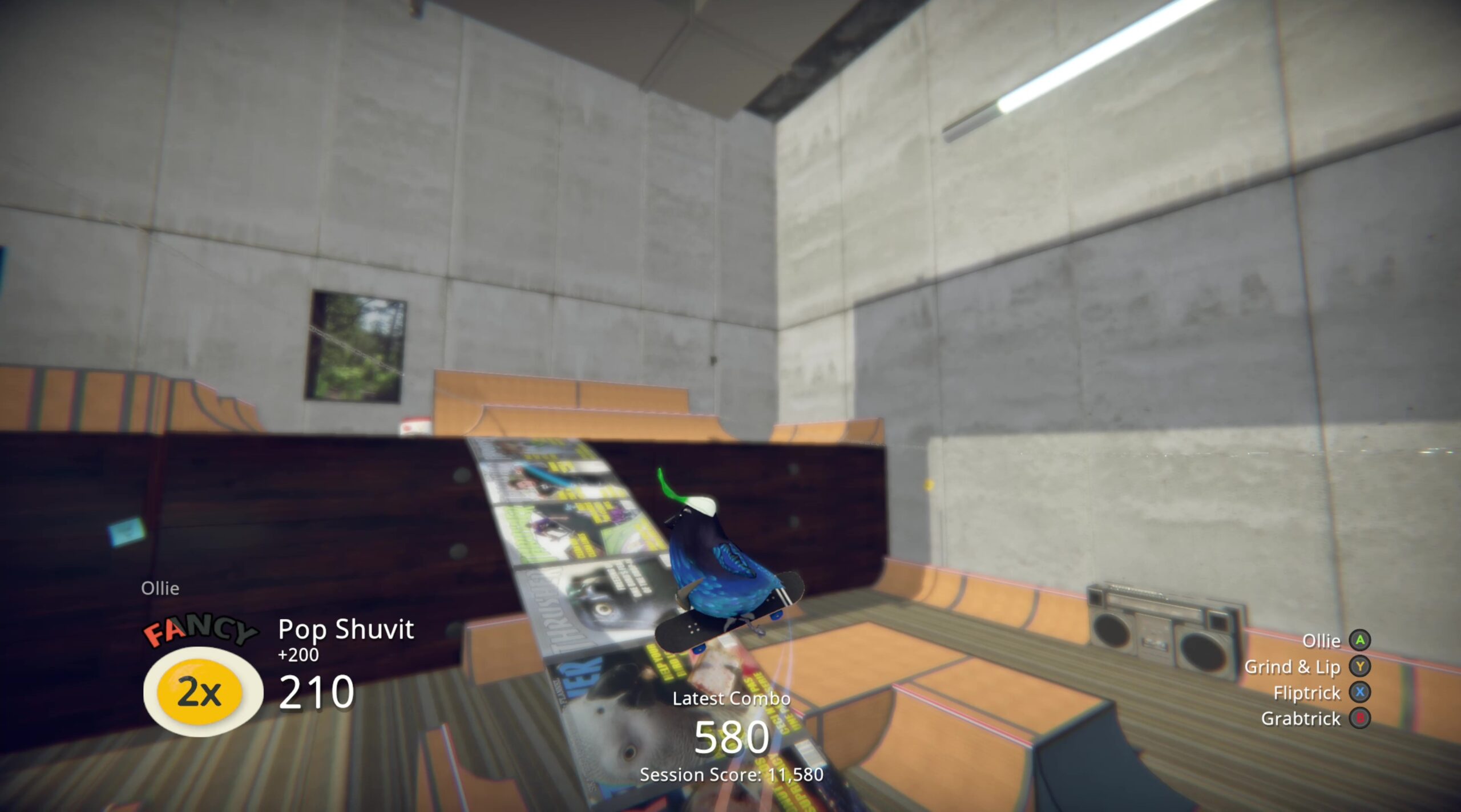 Okay, so you probably also want to know if it’s actually any good, which is a much more complicated topic of discussion. For this particular game, we’re going to need to delve into what makes a skateboard game “good.” What was Tony Hawk’s Pro Skater’s special sauce? Was it the challenge? The tight controls? The soundtrack? Then we’re in trouble here.

To answer everyone’s first question, SkateBIRD is more Tony Hawk’s Pro Skater than it is Skate. You have a button for grab, grind, and flip, and if you rock the control stick up and down, you’ll go into a manual. The controls will be familiar to anyone who played THPS, but the actual feel of the game will not.

You’re a bird! You have hollow bones and you are filled with fluff and birdseed. You can flap your wings and have to grab your board with your beak. The physics are entirely different because of this, and by different, I mean screwier. Floatier is perhaps the more appropriate term. The landings lack impact, the grinding feels frictionless, falling off your board is an appropriately wholesome experience. It’s nowhere near as tight, and that’s going to take some getting used to.

You’re really here for the bird, though, right? I have good news: the bird is great. You can customize the crap out of your avian skater, choosing from a load of different species, then decking them out with all kinds of gear. There’s more to unlock hidden in the environment, just in case you don’t think your feathered friend is fashionable enough.

With that in mind, hopefully you have the stomach for meme talk. Like, that sort of speech that maybe started with Doge. A scream is a screm and a bird is a birb. I’m okay with it, honestly, but I wouldn’t be surprised if someone wanted to reach through the screen and slap the text boxes.

The story involves aiding the bird’s “Big Friend,” a human whose job has them down. This starts by simply cleaning their apartment, but proceeds to corporate sabotage. It’s really not a great story, but some of the birds have character arcs that… are there and get resolved. You’re here for the birds, right? 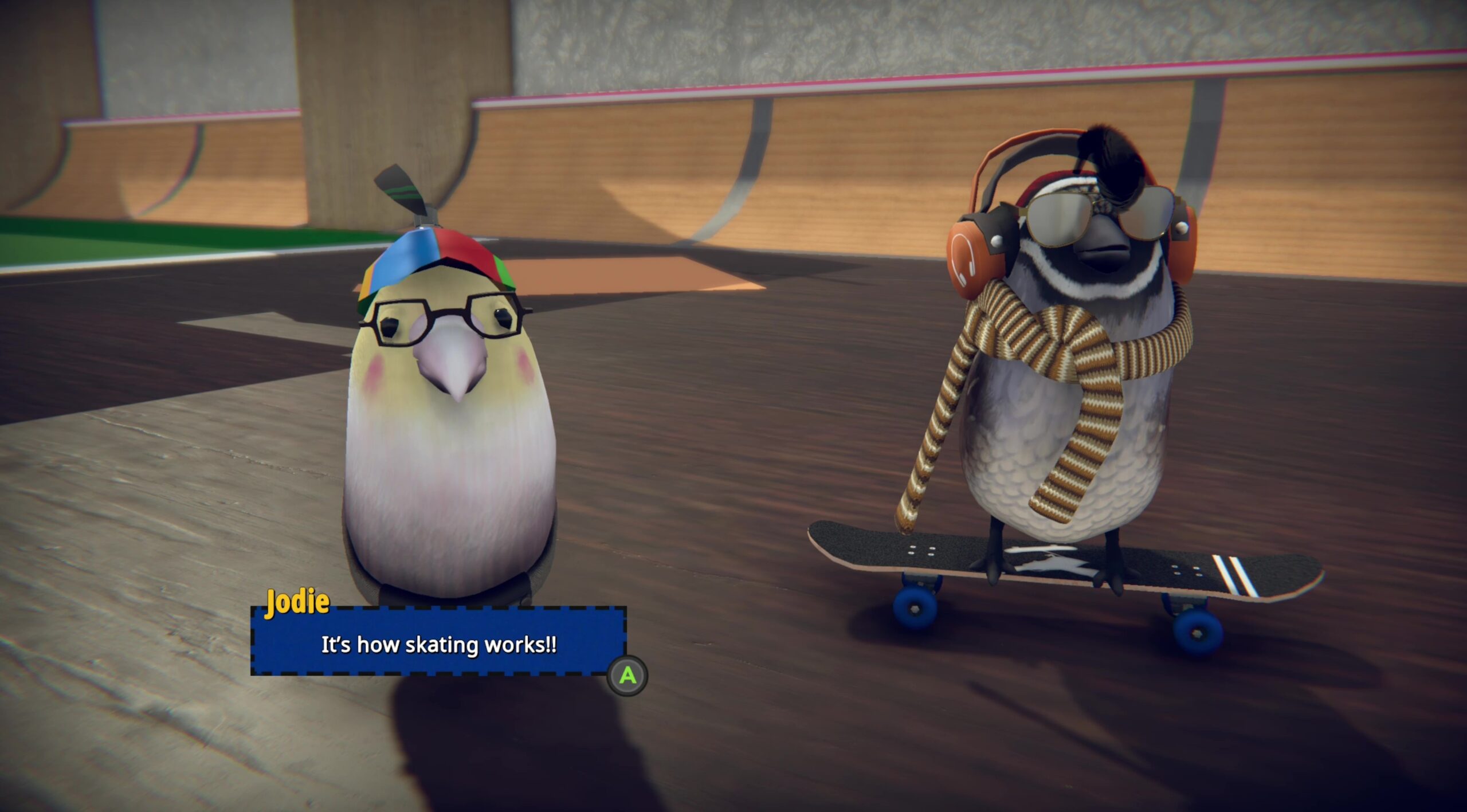 There are five stages and the goal is to clear as many of the quests that are scattered throughout. You’re supposed to focus on the gold dots on the mini-map, but this confused me because there is no mini-map. Apparently, when they say mini-map, they mean a picture of the level on the pause screen, which I really didn’t figure out until the third level.

In any case, you don’t have to clear all the goals, but most of them. There’s usually just under 20 to get through. They range from collecting floating letters, to getting big combos, to starting fires. Likewise, they range from simple and pointless to controller-breakingly frustrating. I got stuck on the second level trying to fan bounce. I’m not even sure if I did it right in the end, it just finally accepted it. There was also this goal where I had to reach something that was high up out of a quarter-pipe, and my bird just refused to transfer out and grab it. Shouting threats at the screen didn’t help.

It’s the worst kind of frustrating. The type where you swear you’re going through the process correctly but the game just won’t accept it. And SkateBIRD is a game that seems to take pride in being laid-back and accessible, then there are these finicky tasks that get in the way. 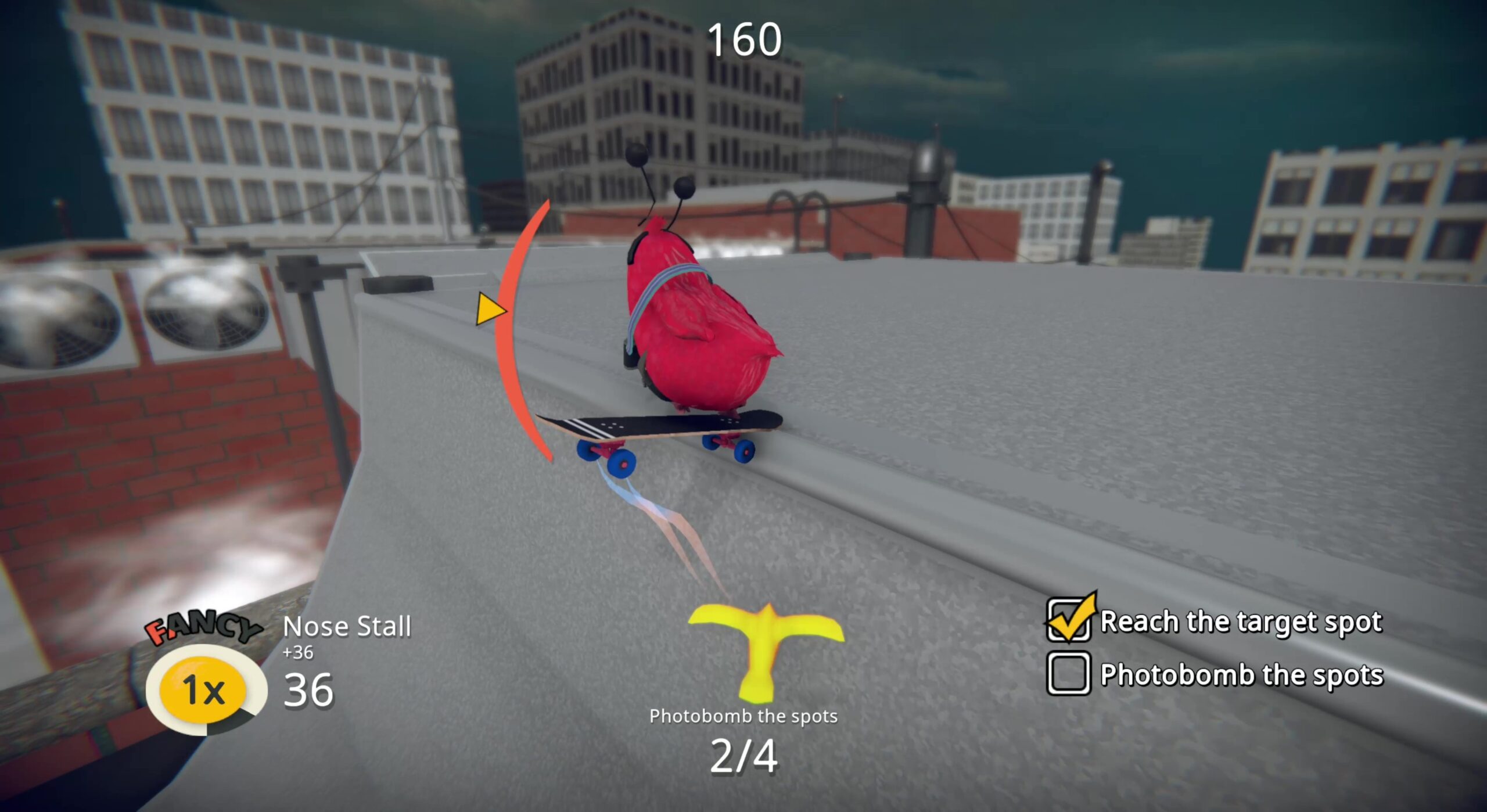 The physics in general can be a pain in SkateBIRD, even though you’re able to tune them. You can make it harder to bail or get rid of the balance mini-game entirely. It’s not a title that wants you to suffer, which makes the suffering I experienced a little unusual. Nonetheless, it’s supposed to be something you can reach the end of on your own terms, and that’s somewhat commendable.

In a similar sense, you can build your own mixtape. The soundtrack is going to be a bit hit and miss, and I personally found some of it abrasive after a while. Most of it gets unlocked by finding cassettes in the environments, which is unfortunate because it means you’ll be hearing a lot of repetition in the first couple of levels. Holy crap, I am so tired of the OST tracks which mix bird sounds, various genres of music, and clips from documentaries. I’m uncomfortable just recalling them and I would like to purge them from my mind and salt the once fertile soils they seeped into.

The other music is contributed by various bands, mostly ska and punk. I didn’t find it terrible, I even liked a few of the songs. They’re pretty on the nose, however. One song includes lyrics about how my entire generation can’t afford a house. Like, yeah, that’s pretty true. It could be worse, guy. You should talk to the dude singing about buying a house and finding out it’s haunted. 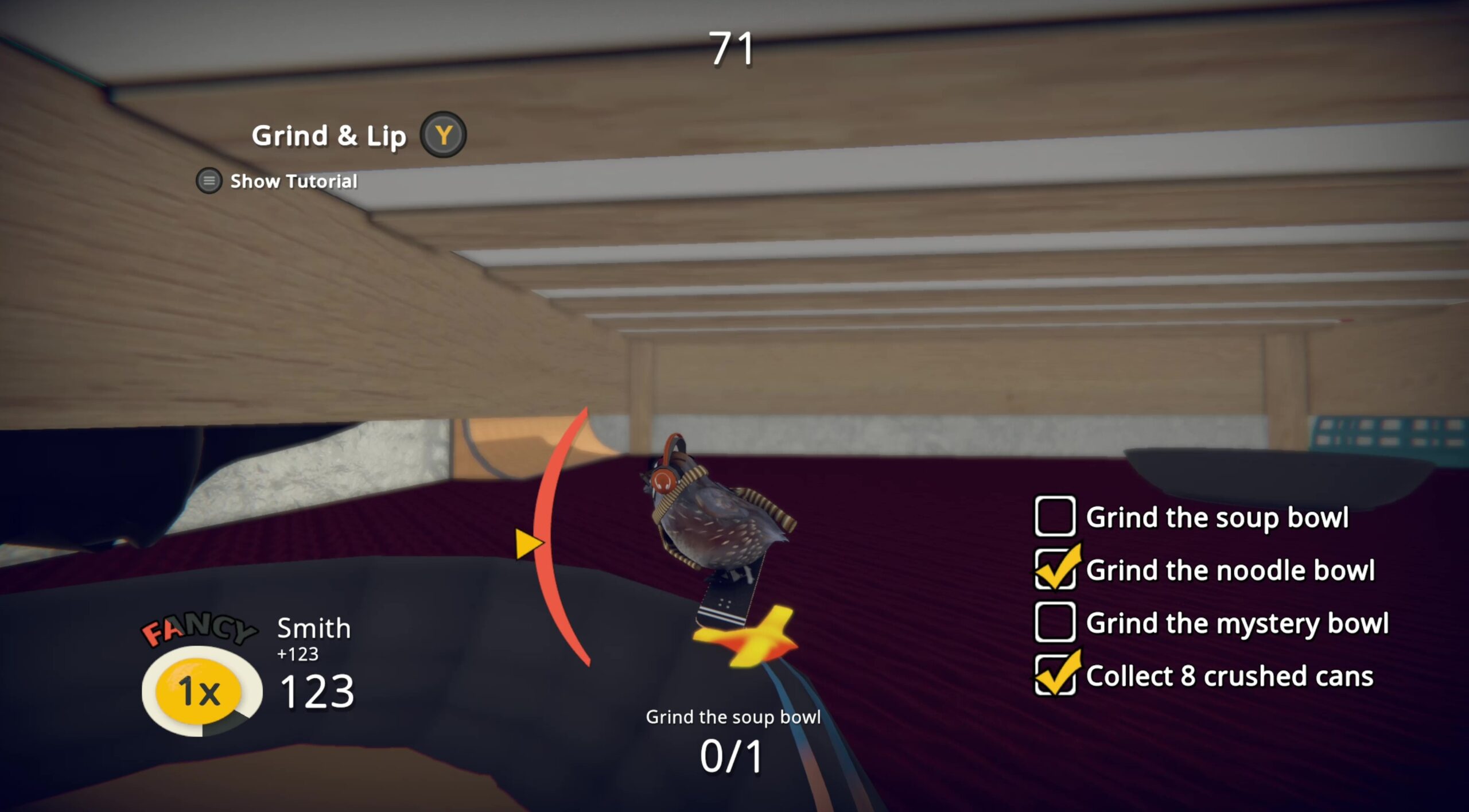 SkateBIRD has it where it counts: the birds. Everything else, though, is tolerable. Barely. It has a habit of making it difficult to enjoy the birds.

And that’s sort of where the paradox lies in SkateBIRD. It has this absolutely friendly veneer, inviting you in, telling you to leave your shoes on, have a seat on the couch. But NO not on that cushion! It pretends like there’s no pressure, then decides that it’s time you rack up 200,000 points.

It’s just overall not that well executed. The physics and gameplay are not where they should be. The levels are just okay. The goals are rarely entertaining. But you’re here for the birds, right? There are definitely skateboarding birds, I can guarantee they are in SkateBIRD. I’m not even being sarcastic, the birds are absolutely great. Just try to focus on that and nothing else.