A game like SiNKR 2 makes for a difficult review. While I could easily explain how it works and sum up its philosophy on game design, it could almost literally be a repeat of a review for the first game. While certainly longer than its predecessor, SiNKR 2 is more akin to something like Super Mario Bros: The Lost Levels than Super Mario Bros. 2. Anything I can say about the game I’ve likely already said in my preview for it.

Still, I’ll try my best for those unaware of Robert Wahler’s fish hook puzzler. Much like the original, SiNKR 2 is a classic example of “less is more” when it comes to game design. If you enjoy puzzles, minimalism, and wracking your brain, then stop reading and buy SiNKR 2. 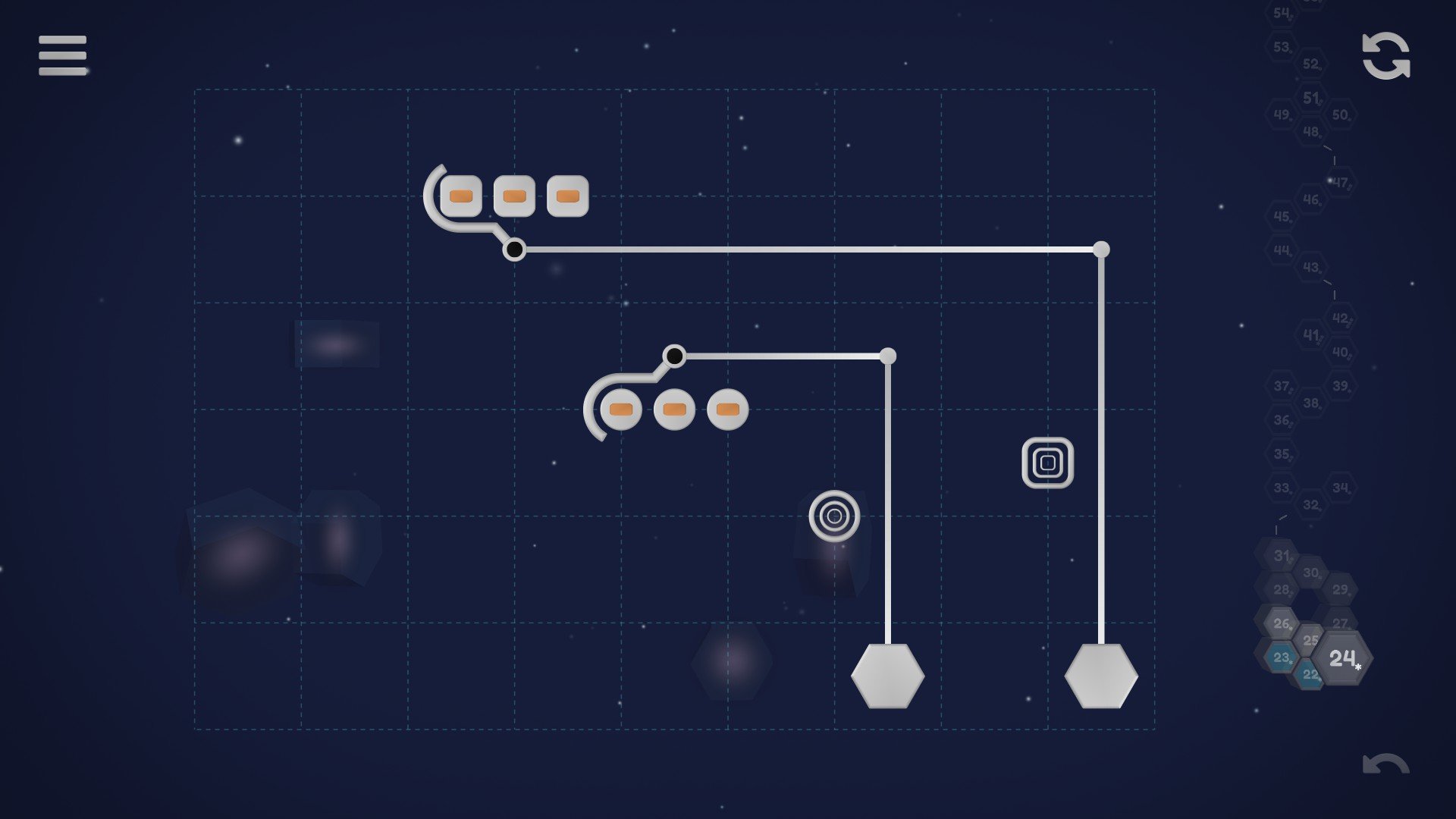 As spoken about by many analysts and amateur game philosophers, the key to good game design is to explain through mechanics rather than text boxes. Newer games don’t have that luxury, what with their complex systems being interwoven around various mechanics, but nothing beats classic platformers from Nintendo’s heyday. A game like Super Mario Bros. introduces everything you need to know about the game within the first few minutes, iterating upon it in later levels without completely shattering your perception of how the game works.

SiNKR 2 (and by extension, its predecessor) can be summed up like that. This is a classic Miyamoto game with a wildly different aesthetic and easy-to-grasp mechanics. The gist of SiNKR 2 is that you’ll be reeling in hooks to carry circles and squares to goals. Slot the objects into the goals and you’ll move onto the next level. Repeat that process for 87 puzzles and you’ll have finished the game.

There is obviously more to it than just dragging objects around, though. In some levels, your hooks can be inverted, allowing you to flip objects on the opposite side of your line. In others, there will be teleporters that will send objects flying across the screen. The beauty of SiNKR 2 is that the simplicity of its design is never sacrificed to make a devious puzzle. Certain parts will require you to hunker down and think, but you’re never going to be completely lost on how to proceed.

It all stems from an interface that doesn’t obfuscate things. In an upgrade over the original, dragging your cursor over specific switches will highlight which line they are attached to. Even the hooks will become highlighted when you’re able to turn them, which helps with puzzles where you need to stop them on teleporters. It increases the complexity of gameplay slightly but doesn’t betray the vision that SiNKR 2 exhibits.

That’s a good thing, too, because SiNKR 2 is a fair bit more difficult than the original. While I can finish the first game in a little over an hour, SiNKR 2 is almost three times that length. That could be seen as a negative, but it actually feeds into a new feature that developer Robert Wahler has introduced for SiNKR 2. Instead of being locked to a linear progression of levels, solving one puzzle will unlock a few on a grid system that allows you to jump around to different levels. Since players aren’t forced to complete everything this time, Mr. Wahler has gone all out on creating some insidiously challenging levels.

I could show you screenshots from the later levels and they might put you off completely. It’s a real treat when you breezing through the introductory segments of a new mechanic to then hit a seemingly insurmountable wall and have to really ponder to get past it. This was sorely lacking from the original, which did admittedly have some tough parts. 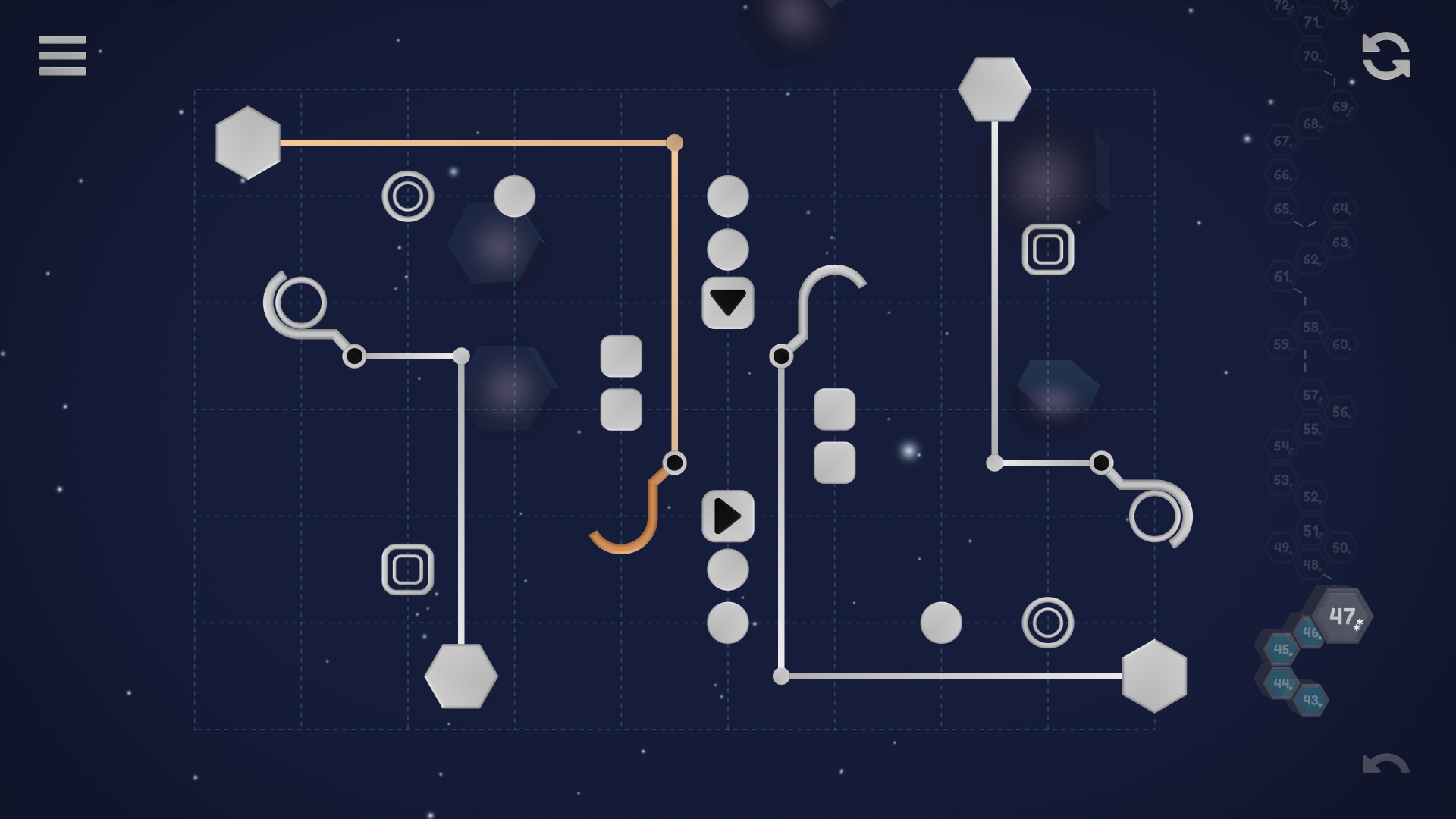 That doesn’t mean the difficulty curve is completely flawless. SiNKR 2 does let you skip some of the harder puzzles, but there are a few sections earlier on that are clearly harder than later ones. In particular, the whole segment of puzzles from level 58 to 66 is just incredibly easy. I understand the concept these levels were tackling wasn’t introduced yet, but the game seems to take a few steps backward with integrating this new idea for future puzzles. It’s just so jarring to be stuck on the previous puzzle for 15 minutes and then clear out the entire next segment in five. At least the more clearly defined restart and step-back buttons make correcting mistakes a breeze.

It also would have been nice to see a few new things here. SiNKR 2 doesn’t introduce any new mechanics over the original game, opting instead to increase the intensity of what you’ll be solving. I’m not sure I can call that a negative, because it’s not like SiNKR 2 is a ridiculously expensive game. For $3, it’s an obscenely good deal for anyone addicted to puzzle solving, even if it feels more like an expansion pack than a sequel.

While I didn’t play the mobile version for review, I could almost see that being the perfect platform for playing this game. Stupidly long waits in the doctor’s office will go by in an instant when you’re trying to figure out how to move some squares around. As for how this will work when it eventually releases on consoles, SiNKR 2 does feature gamepad support. That is something I cannot wrap my head around, but that has more to do with me being accustomed to the mouse controls. The game doesn’t feel harder to play with physical buttons, even if the interface was designed around a touch device. I just opted against them because I found clicking on specific parts to be easier than sifting through them. 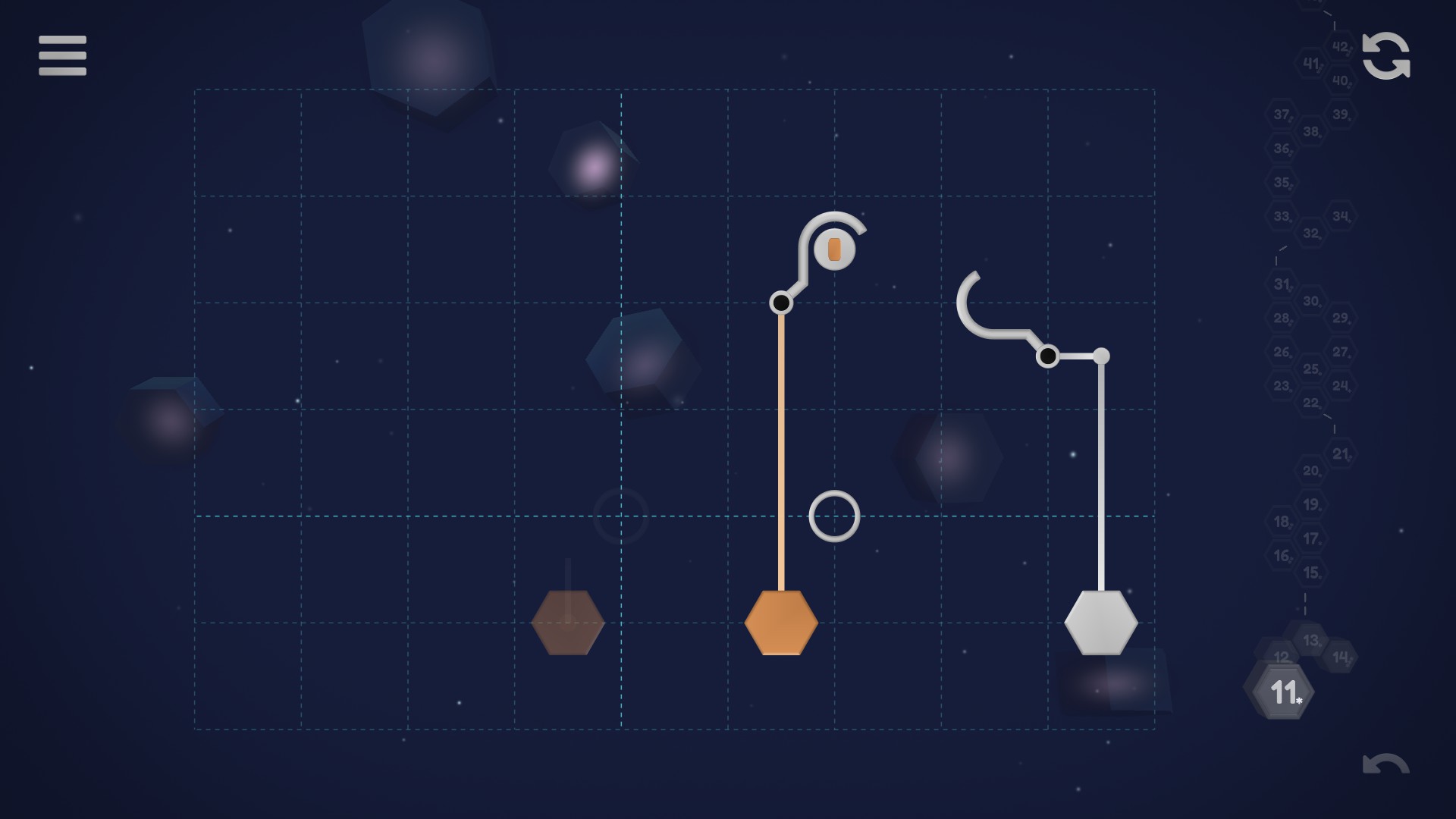 What it all comes down to is that it’s hard to be down on a game like SiNKR 2. It so effortlessly executes its central premise that thinking up any negatives would mostly be nitpicking. Maybe you don’t like minimalist puzzles games or just aren’t big on mobile titles, but that doesn’t make SiNKR 2 bad. In fact, I’d go so far as to say the price makes this a no-brainer purchase for even the most discerning individuals.

Do yourself a favor and check out SiNKR 2. You’re bound to find something you can enjoy here.