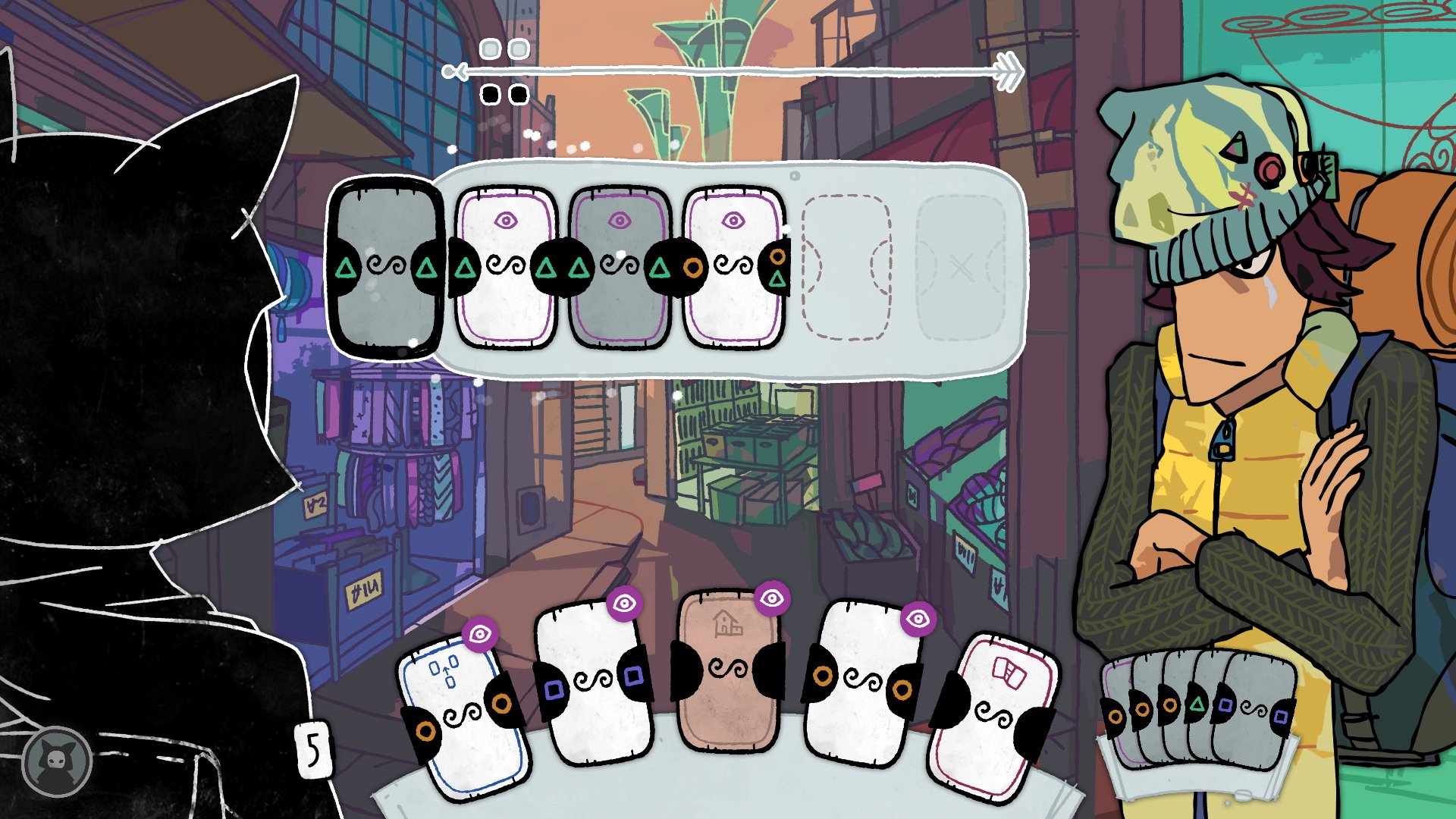 Sometimes a video game comes along and is touted as the “[genre game] for people who hate [genre].” I think Signs of the Sojourner wants to be that game for deckbuilders.

As someone who has been lukewarm on the genre as a whole, the idea of a narrative deckbuilder was immediately intriguing, and man does Signs of the Sojourner show its potential.

It falls short in a few key ways, but this is absolutely a game I’ll talk and think about for years to come, hoping that something else comes close to this level of narrative and mechanical cohesion.

In Signs of the Sojourner, players take the role of a young merchant who has recently lost their mother. That’s about all the setup they get, actually. All of the details surrounding both the player’s mother and their shop are revealed (or not revealed) through conversations with characters in various towns on the map. After the “best friend” character tutorializes the mechanics, it is up to the player to head out on the road, collecting items to sell and having conversations to learn new information about the world and their mother’s past.

Conversing is the only real mechanic in the game, but it’s a very complex one. This isn’t a game of branching dialogue trees where the player chooses what to say and when to say it. Instead, Signs of the Sojourner uses deckbuilding mechanics to have conversations play out. The rules are simple and the decks are small, but the mechanic has profound and unexpected narrative effects.

When a conversation begins, both the player and the NPC must work together to create a chain of connecting cards. The length of the chain depends on the NPC, essentially marking how “easy” someone is to talk to. Every card has a symbol on the left and right sides, and these symbols can be identical to one another or completely different. The symbols have narrative meanings beyond their mechanical function, but more on that later. Matching the previous card’s right-hand symbol with the new card’s left-hand symbol is all a player needs to do.

Depending on the conversation, this will have to be done one to three times. With a successful chain, the conversation continues positively (though not necessarily happily), and generally, new details or items are gained. Each conversation also allows for a certain amount of failed chains to occur.

A failure happens when either the player or the NPC can’t continue the chain and has to play a card that does not match. This makes the conversation turn sour, and a complete failure of a conversation means information is simply lost to the player. Sometimes the failure dialogue is a stark contrast to how the conversation has been going and feels out of place given the personality of some characters, which makes it feel like the game really wants the player to feel bad for failing at the risk of ruining the natural flow of the conversation.

At first, Signs of the Sojourner seems almost too simple. Quickly, things begin to change, and creating matches becomes more and more difficult. You see, each symbol on the card represents a personality trait like logical, empathetic, and even grief. As the player encounters new characters on their journey and has conversations with them, they will be prompted to replace a card in their deck with a new card that has symbols representing that character’s personality. The player must replace a card in their deck with one of the presented options, which is crucial to both the narrative and gameplay.

What ends up happening as the player travels further and further away from home is that their deck begins to be incrementally overhauled. Mechanically, it’s beneficial to start replacing the original symbols (circles and triangles) with the newer ones, as it makes the conversations in other areas more likely to succeed. Narratively, it shows the main character changing over time as they interact with other groups of people. Having spent a week or so out west, the character has changed a bit, and doesn’t quite mesh as well with the folks back home as the conversations become harder.

There’s another layer on top of this called fatigue, and it’s awful. The more the player travels, the more fatigue cards are added to their deck. These cards have no symbols and cannot match with anything. The problem is that this mechanic is way too punishing with no interesting workarounds. These cards can be played, but it’s conversation-suicide to do so. Playing one causes a conversation failure, since it didn’t match with the previous symbol, and will immediately cause another failure afterward, as the NPC cannot play a card that matches it. So that’s not a viable option at all, and these cards, if drawn, end up sitting in the player’s hand until the conversation ends one way or another.

Since the game has a set length of five expeditions out on the road, it’s natural for the player to want to see as much as possible on each journey. However, as the fatigue cards begin to pile up, Signs of the Sojourner becomes increasingly frustrating. If there were a counter-play to fatigue cards, this frustration would be lessened, but there simply is not. Toward the end of a journey, it’s possible to draw four or five fatigue cards – a full hand. I understand the narrative implications: the character is so tired they literally can’t have a decent conversation. But mechanically, it just feels unfair and lame.

This issue could also be lessened if there were some sort of New Game+ mode for the player to explore. There is simply too much in the game to experience in a single four-to-five-hour playthrough. There were conversation paths I failed and wanted to explore again, with a better understanding of deckbuilding and game mechanics, but starting a fresh game means starting everything over. One of the benefits to successful conversations is unlocking new areas of the map, but I lost all interest when I saw that I’d have to unlock those paths again (risking failure while trying) just to try and learn more about the world and my character’s backstory.

The world itself is filled with a colorful (literally and figuratively) cast of characters that are a joy to get to know. Their personalities are fleshed out through successful dialogue and the types of cards they play, and I quickly found myself wanting to travel to specific cities just to see how my favorites were reacting to events happening in the world. All of this is made so much better by the beautiful art and music that make the world feel both exciting and relaxing to explore. The vivid colors make every character and environment unique, giving  each new area a sense of excitement.

Signs of the Sojourner is one of the most cohesive narrative games I have ever played. The interplay between mechanics and storytelling is absolutely brilliant, which makes it a shame that it misses the mark in terms of actually being enjoyable to play. The inclusion of a frustrating “fatigue” mechanic is at odds with the general laid-back design approach to deckbuilding. There is something truly beautiful here that is worth experiencing, it’s just a shame that the game seems to fight itself at every turn.