Gnomebody gives a shit about this franchise

I’ve never watched Gnomeo and Juliet, the first entry in the British Garden Gnome Public Domain Property Parody Adventure series, but apparently they opted not to end the first film with mutual suicide.

If you’re looking for a mystery or surprises, this movie isn’t for you. There’s two twists that are painfully obvious, and it’s largely just the gnomes moving between strangely empty setpieces looking for clues that make sense to nobody but Sherlock. The story is incredibly simplistic, which makes it strange that there’s still plotholes every step of the way.

When I was in the box office line, the family in front of me had the following conversation:Mom: Honey, you want to see Sherlock Gnomes, right?6yo Daughter: NNNNOOOOooOOOOOOOooOO!!!Dad: Uhhhh 3 for uhhh Pacific Rim, I guess?

So if you’re wondering who this movie appeals to, the answer is literally nobody. I saw this alone in an empty theater.

This film starts with the gnomes getting moved from rural Stratford-upon-Avon to the bustling capital of London. Once there the whole yard-full of gnomes (save for Gnomeo and Juliet) get kidnapped, and they team up with Sherlock and Watson to follow a bunch of stupid clues that barely make sense.

Sherlock and Watson just exist in this universe as garden gnomes. They have an entire history of solving crimes perpetrated by Moriarty, who in this universe is represented by a sociopathic pie mascot. There’s no attempt at cleverness here, at all. There’s just a pie company called Moriarty’s Pies. At least TRY, people. Make him a tart called Mori-tarty. That took me one second. It’s not clever, but it’s more effort than the people making this put in. His design is just a yellow Stay Puft Marshmallow Man with a pie for a stomach. And he’s evil JUST BECAUSE. That’s the actual explanation for their rivalry. He’s just evil. He could’ve been a Pillsbury Doughboy situation who got baked and it made him crazy. ANYTHING. I can’t find any promotional art featuring him, indicating A.) they were rightfully embarrassed by his design or B.) they were legit trying to maintain some sort of secrecy. In lieu of official art, enjoy my interpretation: 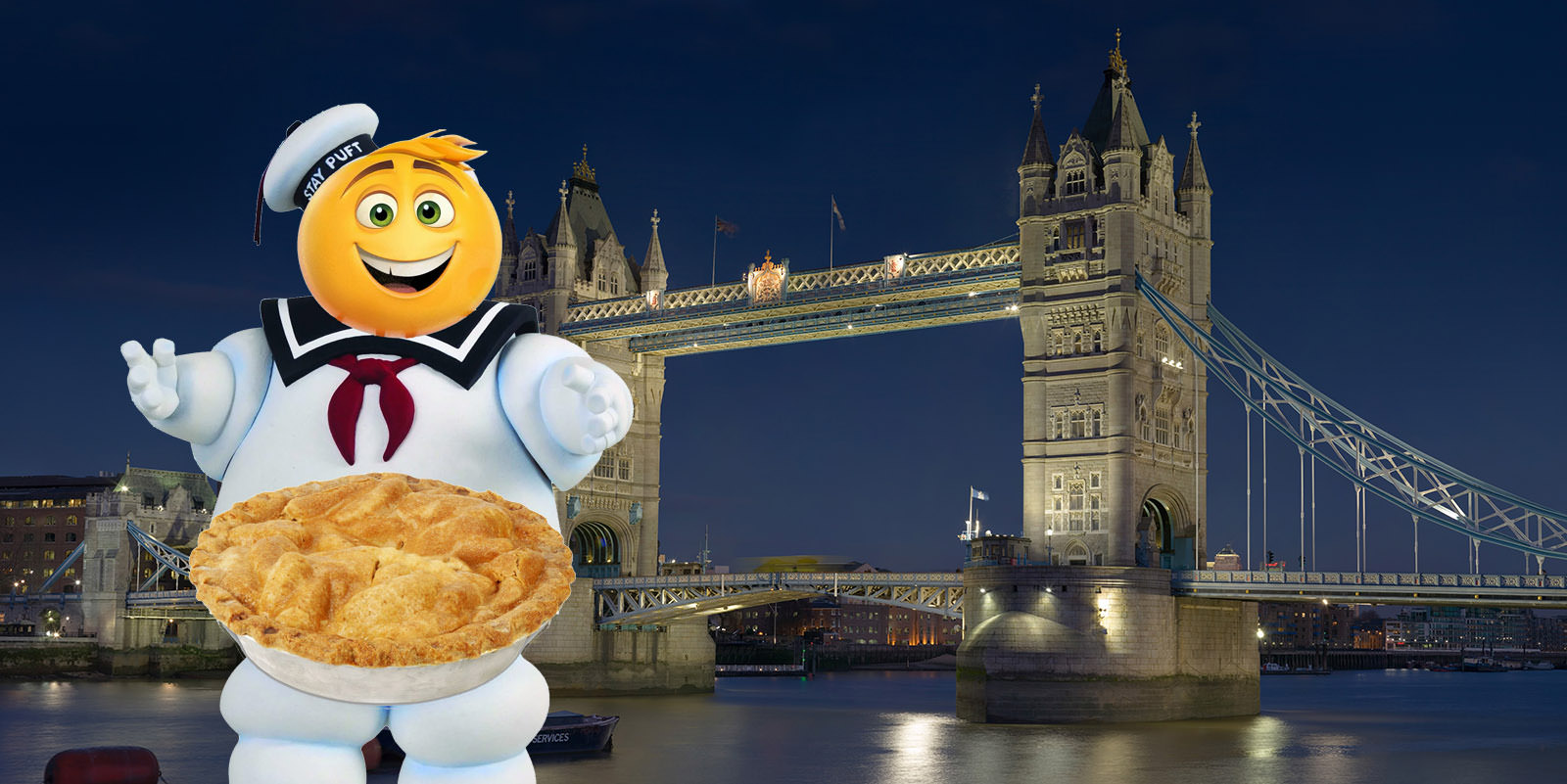 Anyway, there’s not much to say about the plot. Gnomeo and Juliet get into petty arguments for no reason and it sort-of drives them apart, and the rest of the movie is transparent situations that make them realize they’re better when they work together. Same goes for Sherlock and Watson, since Sherlock’s a colossal dick to Watson for no reason.

Spoilers below, if you can call them that.

The entire plot would fall apart if, on two separate occasions, Sherlock had checked for a body. I’m not even kidding. There’s two situations where a character allegedly dies, but the only evidence is hearing a shattering noise or seeing a small chunk of the supposedly dead character. Neither time he bothers to check for a corpse. He’s just like WELP and moves on. A+++ detective work.

Early in the movie, Sherlock defeats Moriarty by dropping a whale skeleton on him at the Natural History Museum, and is satisfied with seeing a shattered piece of his head on the ground. Later when (shocker!) Moriarty is still alive, it’s shown that he’s clearly made of some kind of rubberish plastic when other characters bounce off of him. I said ‘What the FUCK.’ out loud, to myself, in the justifiably empty theater. Why would his head have shattered if he’s made of rubber? This fucking thing can’t even get basic physical properties of materials right.

It also made me wonder where the consciousness of these animated objects is stored. The top of Moriarty’s head is cracked clean off and he was fine. The gnomes are always worried about being smashed, but is it because they’d ‘die’ or because they’d be still conscious as shattered pieces of clay that would then be discarded, living for eternity immobilized in a landfill? The implications of this universe are dark.

On that note, the movie reveals that pretty much all humanoid inanimate objects come alive when we’re not looking, so there’s a subplot with a bunch of toys. Sherlock was once engaged to a hot doll, voiced by Mary J Blige, and she does one of the most out-of-nowhere musical numbers I’ve ever seen. They’re just talking and then she drops a single like an anvil and then kicks everyone out. Juliet then walks right back in and MJB is just like ‘Whatever, here’s the clue I refused to give up not five seconds earlier’.

If you’re wondering if these Toys have any more of a Story to them, you’re probably not aware of the vast and merciless legal team Disney has available to them.

The move to London sort of makes sense, since that’s where the original Sherlock operated from, but aside from that, the movie was just a bunch of generic looking locations alongside the Natural History Museum and Tower Bridge. The Natural History Museum plays a decent role, but the animators didn’t put anything in it besides the whale skeleton hanging from the ceiling, so it has this weird sterile, unfinished look to it.

The Gnome Cinematic Universe operates on Toy Story rules, where they can’t be seen moving about by people, but that fact barely factors into this story. They’re outside like…a lot. London’s a fairly densely populated city, but there was just never anyone around and they were largely free to roam about uninhibited. I kind of hoped there was a background plot where London’s population had been decimated, like Sherlock Gnomes took place concurrently within 28 Days Later.

Alas, there was a scene where Sherlock and Juliet hide in a squirrel costume to look for a clue in a crowded park. This scene has some horrifying CG elements, as the park’s actual squirrels look like real-life squirrel skins were tugged over some otherworldly entities. They look upsettingly realistic while having dead, black eyes. I almost wished there’d been a child present so I could’ve heard their reaction.

All that said, I have no idea why this movie exists. The Sherlock plot didn’t really depend on Gnomeo and Juliet for anything. Them being gnomes had no bearing on the story, aside from them having to avoid people lest they freeze back into clay figurines at inopportune times (which almost never came up). I can only think they went with gnomes because toys were already taken, and it’s a relatively easy word to make puns with.

The film is definitely aimed squarely at kids, so the plot is just a lot of things happening with little to no connection to each other. The first film had music by Elton John, so there’s a bunch of random Elton John songs that play over certain scenes, but they never fit the action or feel appropriate. Lots of left field shit peppered throughout this thing, too. Juliet flies a drone in the film’s climax. There’s a pseudo-beastiality subplot about a humanoid gnome having the hots for a ceramic frog. One of the gnomes is some kind of Borat knockoff in a mankini. They go to London’s Chinatown and fight a bunch of stereotypical Asian figurines. All of it seems like it should’ve been vetoed at a meeting at some point but nobody cared to put a stop to it.

As for positives, I have to say the voice acting is fine, and the actual animation isn’t terrible. It did seem like the gnomes, the world, the handful of humans, and the animals/nightmare squirrels were all done by different studios, though. If you’re just looking for some color and noise to keep your sub-8 year old kid from driving you insane, you could do far worse, but I wish animation studios would try a little harder to compete with Disney/Pixar.